Heather Dubrow and Dr. Terry Dubrow continue to show off their stunning (and massive) home in Orange County, California.

Three years after completing their 22,000-square-foot residence, the former Real Housewives of Orange County star and her husband, who stars on the E! Network‘s Botched, allowed photographers inside their mansion, which they’ve deemed “Dubrow Cheateu.”

“I can hype this house as much as I want. It’s going to live up to that hype. It’s going to exceed that hype,” Terry said during an October 15 interview with Architectural Digest.

Heather and Terry’s home is located in Crystal Cove and boasts stunning views of the Pacific Ocean, which Heather compared to the views of famous Palm Beach, Florida hotel The Breakers.

When Heather and her husband first began their hunt for the perfect home, it was Terry who discovered the 40,000-square-foot property. However, when it comes to the design and decor of their home, Heather took on the bulk of the responsibilities.

“The last house we built, I had some input,” Terry said. “We had the usual disagreements—‘build a house, lose a spouse’ kind of thing. With this house she said, ‘Here’s the deal. I’m going to build this house, but I don’t want to hear anything from you at all.’ And so that was the rule.”

Although Terry agreed to give the reigns to Heather when it came to the design of their home, he didn’t always understand the direction she was going. That said, it all made sense in the end.

“I didn’t like the way she was doing the kitchen; I couldn’t see it. It seemed stark and too clinical for me,” he admitted, but the “way it came together, it’s anything but.”

“He loves one hundred percent of this house,” Heather insisted.

According to Heather, she chose a predominantly neutral palette for their home but included several different textures in her design, including stone, wood, and leather.

“It’s like Kelly Wearstler threw up in the house. I love her. I love her design style,” she explained. “I didn’t repeat fabrics, but I used the same tones or the same fabrics in different colors, in different rooms. There are repeating elements in that respect.”

Throughout the home, trees are featured in numerous spaces, including an etched glass window. There is also an olive tree in the couple’s courtyard, which they inserted into the space with a crane.

On the main floor, Heather ensured her four children would feel completely comfortable and at home with her design by incorporating a number of fun things for them to enjoy, including an entire hall of pinball and a 21-seat movie theater.

Upstairs, Heather included a fun feature for herself: a champagne button. As the former reality star explained, she can ring the bell from the closet in her master bedroom and someone, likely husband Terry, will bring her a glass of champagne.

Speaking of champagne, Heather also had a champagne wall built in their dining room and a six-foot-long trough cut into an island in her kitchen that she can fill with ice, stick caviar, crudités, and, of course, champagne.

“Everyone just stands around the island and talks and eats. It’s really conducive to casual entertaining,” she said.

Also a great gathering place is their backyard.

“The backyard has an in-ground pool. There are palm trees, a trampoline for the kids,” Terry said.

As for their future in the home, Terry told Architectural Digest he was planning to stay in the house for his entire life. Meanwhile, wife Heather didn’t seem so sure.

“We’re never selling this house; you’re going to bury me in the backyard,” Terry said.

“Well, we’ll see,” Heather interjected. “We’ve honestly never lived anywhere longer than three years. But I think this is the first house we’ve been in that feels like our true home.”

Below some are more photos! You can see all the pictures at Architecturaldigest.com. 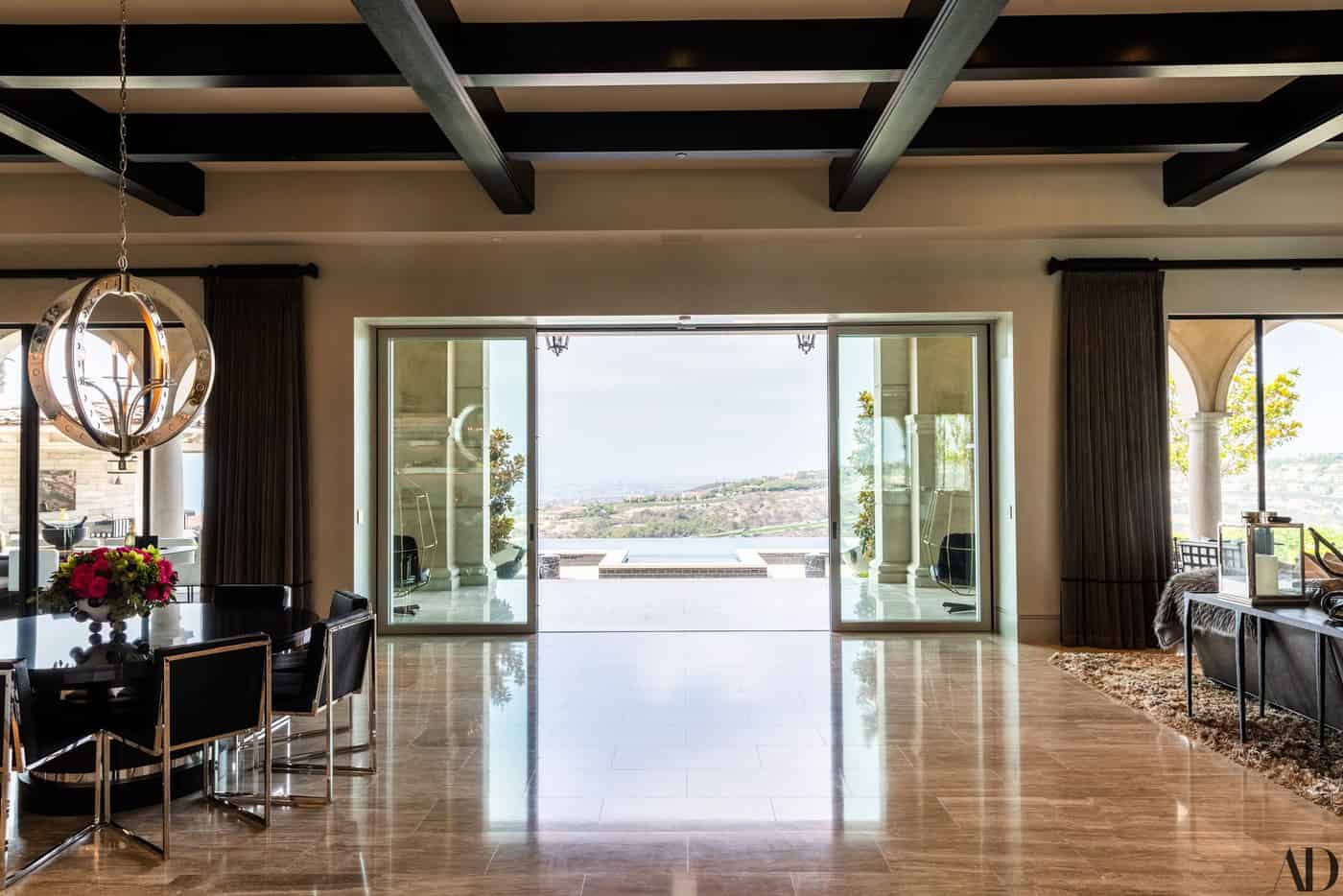