The Real Housewives of Dallas Recap: D’Andra and Brandi Have it Out with LeeAnne 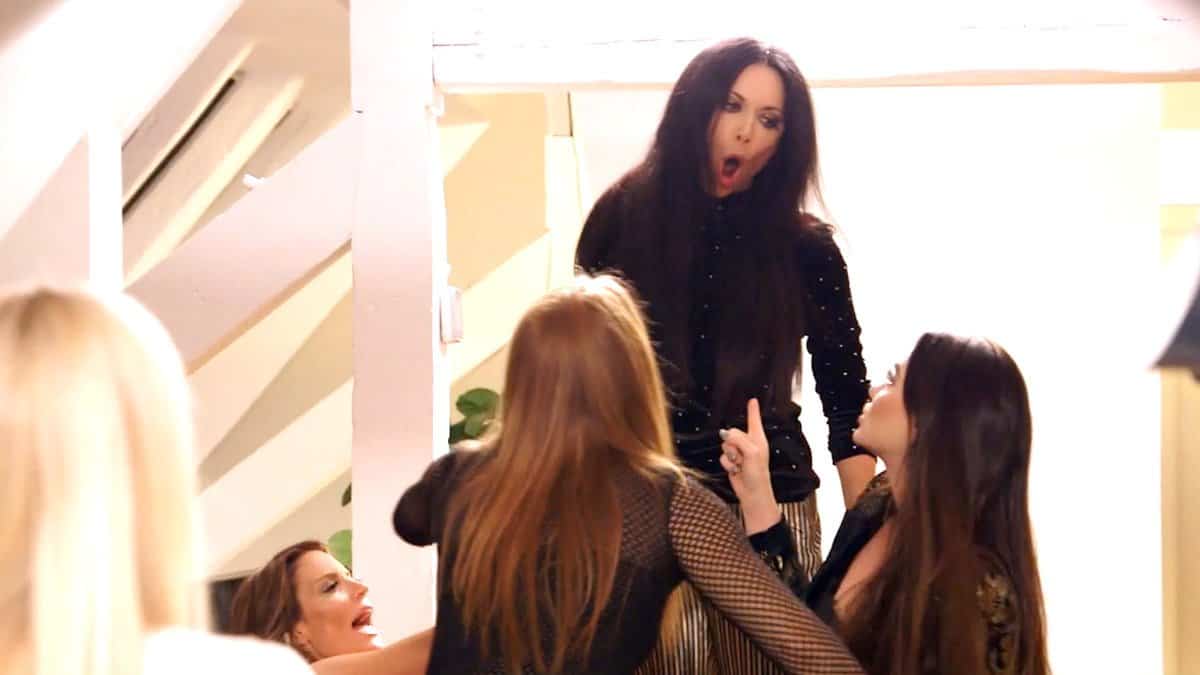 The ladies of The Real Housewives of Dallas were in rare form last night as they brought their messy Texas ways  all the way to Denmark.

When we picked up with the ladies, they’d just arrived, and everyone was ready to unload all the baggage from back home–especially D’Andra and Brandi.  D’Andra was still going on and on about Dallas “society” and the lecture Kameron and her mother-in-law gave her about her reputation, and the “things people have been saying.”

For her part, Brandi was still seething over the fact that LeeAnne called her an alcoholic behind her back, and she was ready to confront her–only problem was, she wanted to be drunk while she did it, so LeeAnne would be forced to call her a drunk to her face.  Sounds like a solid plan, right?! I mean, what could possibly go wrong? Five loud, southern women, drunk and jet lagged on their first night in Denmark in front of the patrons of a five star restaurant? Well, it ended nearly as badly as you would think.

Now, Stephanie tried to tell Brandi that if she had a problem with what LeeAnne had said, she should just pull her aside, and tell her so–while she was sober.  But Brandi wouldn’t hear of it.  She insisted that being drunk was the only way to deal with LeeAnne, and it went about as badly as you would expect.  Oddly, enough though, LeeAnne barely acknowledged Brandi, other than to look at her like she was crazy. In fact, it was D’Andra and Kameron that had the Danes giving the side eye.

D’Andra attempted to confront Kameron about the things she and her mother-in-law Jimmy had said to her, and how they must have been doing a lot of talking behind her back to come up with their whole spiel.  Kameron admitted that they had, and once again tried to defend her mother-in-law, and herself, saying that she was hurt that D’Andra was so angry.  Just as LeeAnne had promised, she didn’t allow Kameron to be confronted alone, so she stepped up and tried to have her back.  Theses two have become like a two headed housewife this season.  You can’t say anything to either one of them without the other one chiming in, and D’Andra had had it!

LeeAnne was pretty upset by then, too,  and told D’Andra that she needed to learn to control herself, and should perhaps start meditating like she had.  This was pretty rich coming from LeeAnne, and D’Andra couldn’t help herself from reminding LeeAnne that she was only about 6 months along on this new zen journey she was on.  Touche!

She had Kameron questioning her about not coming to LeeAnne’s dress fitting, and LeeAnne going on and on about how Kameron was right to be concerned about her reputation, and she finally snapped.  When they left the restaurant, and got back to the hotel, D’Andra finally put her finger in LeeAnne’s face and told her to stay the hell out of their conversation, and when LeeAnne popped up to tell her not to put her finger in her face, she grabbed LeeAnne’s hair, which, for a moment, looked like it was going to end in fisticuffs, but luckily, LeeAnne simply retired to bed.  She said she was exhausted from her wig to her pantyliner and couldn’t take another moment.

Brandi tried to remind her that D’Andra was her best friend, but LeeAnne said that simply wasn’t true anymore.  She said that she might be D’Andra’s best friend but that D’Andra had been treating her horribly.  The following morning, everyone woke up, ready for some danishes and some Danish culture.  Brandi and Stephanie went bearing at a local brewery, and D’Andra and Cary took a cooking lesson.  LeeAnne was so over D’Andra that she actually chose to join Brandi and Stephanie at the brewery, and talk soon turned back to D’Andra, whom she now deemed “crazy” and in need of “anger management.”  She also told them that she was really proud of herself and the way she’d been controlling herself lately.  Stephanie agreed, and tried to get Brandi to pay LeeAnne a compliment, as well, but Brandi simply looked away.

Later that night, everyone enjoyed a concert given by Cary’s cousin, who is actually a huge deal in the Denmark music scene.  Everyone managed to relax a little after that, and as the ladies made their way back to the hotel, once more, D’Andra apologized for losing control the night before.  But remember, Brandi still hadn’t had her say, and since she was drunk–again, she decided now was the time.  She told LeeAnne that Mama Dee had told her the she’d called her a drunk, and mentioned how that could adversely affect her adoption process, which hadn’t yet been finalized.

Brandi was in tears, and at first, LeeAnne tried denying that she’d ever called her an alcoholic, but then she came to her senses (there are tapes of her saying it, after all) and fessed up.  She said she hadn’t thought of the adoption and apologized for saying what she did out of anger.  But Brandi wasn’t quite finished sharing yet.  As she continued crying, she admitted to the group that being called an alcoholic had really “triggered” her, not because she was an alcoholic, but because during some of her most difficult moments with her husband, Brian, she had started drinking much more heavily to cope and ease the pain and tension she was feeling.  The ladies looked on in disbelief as she sobbed and excused herself from the table, with Stephanie trailing behind her.

Of course, LeeAnne wasn’t quite as sympathetic.  During her interview, she said that Brandi was actually correct–she had been wrong to call Brandi an alcoholic.  She said Brandi ‘lacked the sophistication’ to be called an alcoholic, but was, instead, just a “drunk.”

Well, viewers, this is far from over. The RHOD ladies continue their trip to Denmark next week, and you ain’t seen nothin’ yet!