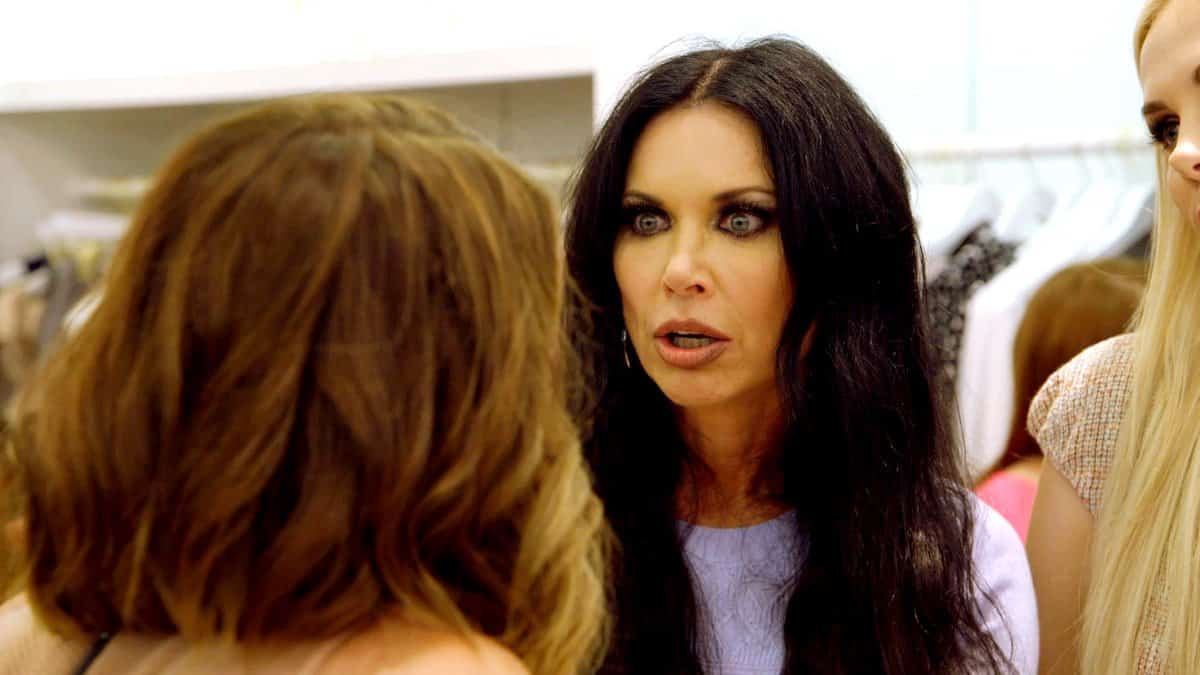 I don’t know about you all, but this season of The Real Housewives of Dallas is really beginning to make me happy that I’m not a member of Dallas “society.” It sounds absolutely exhausting, and apparently the ladies who run in those circles are a bunch of judgmental snobs! All the same, it seems to be all the RHOD ladies can talk about these days.

When we picked up with them last night, D’Andra and LeeAnne were both still upset over the talk they had during the grand opening of Cary’s laser treatment center.  This is nothing new, of course. They’ve been at odds all season.  D’Andra has suspicions about what’s “really” going on in LeeAnne’s relationship with Rich, and LeeAnne’s jealousy over D’Andra’s recently renewed friendship with Brandi has her talking plenty of trash about them.  Most recently, she’s been saying that Brandi is a “bad influence” on D’Andra, and will surely ruin her “high society” reputation if D’Andra continues hanging out and drinking with her.  In fact, LeeAnne told D’Andra that she’s quite “concerned” with her alcohol consumption, a statement D’Andra didn’t appreciate one bit.

D’Andra really wasn’t wrong to be angry, either. After all, no one else in their circle has any  “concerns.”  When she brought it up to her husband, Jeremy, he said he could count on one hand the number of times she’d been out with Brandi.  Cary was unconvinced, as well, and when LeeAnne tried to get her on her side, she said that implying that D’Andra had a drinking problem really wasn’t fair or accurate. In fact, the only person who does agree with LeeAnne is Kameron, and that’s only because she spends all her time doing LeeAnne’s bidding.  It’s sort of weird.

In the meantime, D’Andra’s mother, Dee was planning  a cooking party.  She only invited LeeAnne and Kameron, and their husbands–and D’Andra and Jeremy, of course.  LeeAnne was a bit nervous about going at first, but she’s always been close with “Mama Dee,”  and was hopeful that going to the cooking party would go a long way toward getting her and D’Andra’s friendship back on track.

Dee was in rare form that day, and informed everyone that her amazing cooking abilities were the source of her daughter’s “weight problems.” It was a bit rude, but once the cooking got started, it was plain to see why D’Andra might have packed on the pounds living under her mother’s roof.  They prepared meat loaf and mashed potatoes–with almost an entire bottle of ketchup and at least six sticks of butter!  But just after she finished insulting her daughter, she turned around and gave her an apron that said “Queen Bee,” as an homage to the “Queen of Dallas” contest D’Andra and LeeAnne had during their trip to Beaver Creek.  D’Andra took it as Dee’s way of sending a message to LeeAnne not to mess with her daughter–and when you look as it that way, it really is kind of sweet.

Once D’Andra, Kameron, and LeeAnne had a moment to themselves, D’Andra brought up how hurt she was about LeeAnne saying she had a drinking problem.  But LeeAnne was quick to correct her.  She said that she never said she had a drinking problem–only that she had become “concerned” with the amount of drinking she’d been doing recently.  D’Andra didn’t really see much of a distinction, but once again, Kameron was quick to jump to LeeAnne’s defense.  She said that LeeAnne had told her many times that she was concerned about D’Andra spending so much time with Brandi because Brandi drank all the time.  She added that Brandi had been drunk during the charity event, and had been unsteady on her feet.

In addition to her husband, Court, Kam also brought along her mother in law, Jimmi, a Dallas society icon, and the matriarch of the Westcott family–a mantle that Kameron will eventually carry herself.  When the two Westcott women got a moment alone with D’Andra, they pounced on her immediately, and issued a warning about what it truly meant to be a part of Dallas society, and what people had been saying recently about D’Andra and the company she was keeping.

Jimmi told D’Andra to stick with her true friends like LeeAnne and Kameron because if she chose to “march with this different drummer” she was sure to get criticized in a conservative town like Dallas.  She added that Kameron also had a friend that she couldn’t really spend much time with (although she wouldn’t say the friend’s name) because of her reputation.  Kameron was a bit more straight forward.  She said that Brandi meant well, but simply didn’t understand Dallas society or proper behavior, and would inadvertently ruin D’Andra’s good name.  She also said that she was worried that Brandi would talk about her unfavorably outside of their circle of friends.  Brandi was taken aback, but seemed unsure of exactly what to say. After all, Jimmi was her “elder,” and southern belles don’t talk back to their elder.  So she sat there listening and seething, as Jimmi and Kameron lectured her like a child.

In another room, Dee took LeeAnne aside for some “Mama Dee” time, and the two women discussed the state of her friendship with D’Andra.  LeeAnne began by telling Dee all about the things D’Andra had said about her relationship with Richard, and how it simply wasn’t true that they were living “separate lives” as D’Andra had said.  Dee nodded sympathetically at this.  After all, she’d already advised D’Andra to leave that issue alone, and to mind her own business when it came to LeeAnne and Rich’s relationship.  But when LeeAnne brought up her concerns about D’Andra’s drinking, Dee wasn’t nearly as receptive or agreeable.  Blood runs thicker than water, after all, and Dee simply didn’t feel that her daughter had any problem with alcohol, whatsoever.  Besides, drinking is a touchy subject in the Simmons family.  D’Andra’s father had a severe drinking problem that had ultimately led to his gruesome suicide, and the thought that anyone would accuse her daughter of having the same problem simply didn’t sit well with Dee.  She simply advised Dee to let it go, and not to let such issues affect their relationship.

As the dinner wound down, Dee made a toast that appeared to hit home with both LeeAnne and D’Andra.  She said that life was short and fleeting, and that you just never knew when the last time you saw someone you loved really would be the last time you saw them.  She said every moment they had with their loved ones was a miracle, and should be cherished, rather than mired down with petty non issues.  Everyone seemed to agree.

The following evening, everyone attended an event to unveil a mural of one of Jeremy’s famous photographs, and just before the others arrived, D’Andra told her mother just how hurt she’d been by Kameron and Jimmi’s attack during her cooking party.  Dee gave her daughter the best advice possible.  She told her to forget about the haters and to stop worrying about what other people had to say about her.  Dallas society could be tough, she said, and the Simmons name would always inspire envy and have people talking, but that D’Andra needed to let all that go, and be herself. It was great advice, but a little easier said than done.  D’Andra said she was tired of worrying about what people thought, but just couldn’t quite bring herself to stop caring, altogether, yet.

When Kameron arrived, D’Andra was pretty blunt about her feelings, she told her that she’d been hurt by the fact that she and Jimmi had “attacked” her at Dee’s cooking party, which put Kameron on the defensive immediately.  She said her mother in law had only been trying to help protect D’Andra from the “train wreck” her reputation was becoming, and warned her not to ever cross the elder Westcott woman.  D’Andra was a bit shocked by her reaction. After all, she’d only been trying to be honest about her feelings.  When Cary tried to intervene and tell D’Andra that perhaps Jimmi really had just been trying to help her, D’Andra said it was “none of her damn business.” That did it! Kameron said that she was done, and that, from now on people could say whatever they wanted about D’Andra, and she wasn’t going to say a word to defend her, before  storming off in huffy pink cloud.

Cary went after Kameron, and told her to come back in and talk to D’Andra, but Kameron said that she was completely done, and that D’Andra was acting like a “crazy b***h.” She added that people had been saying horrific things about her, but that if she was going to disrespect her mother in law that way, she would “peace out.” Sheesh!

So, as you can see, Dallas society is no joke.  All this talk of “train wrecks” and “horrific” talk over a few boozy lunches with a girlfriend?! Count me out! And believe it or not, things are only going to go from bad to worse.  Next week the ladies head off to Copenhagen, and like any housewives trip, it’s going to be a passport to trouble!!