The Real Housewives of Dallas Recap: Are You Saying I’m An Alcoholic? 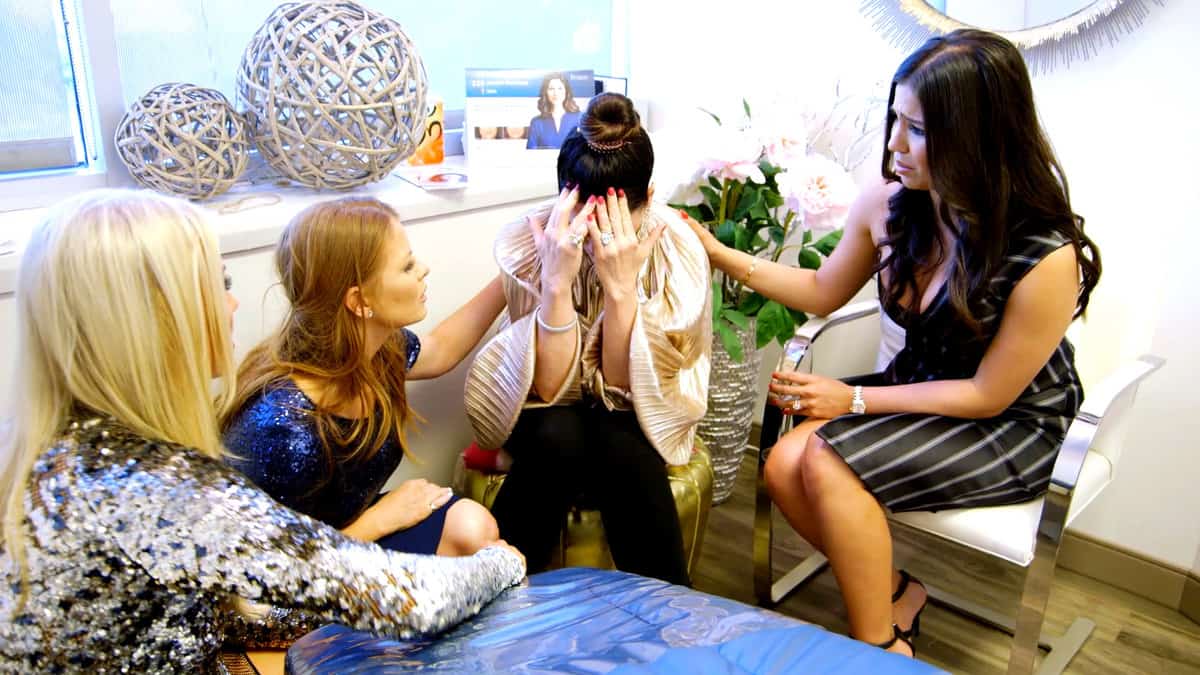 You’ve probably all heard of Texas Hold ‘Em, but have you ever heard of Texas Twist ‘Em? Probably not…So I’ll fill you in. It’s an age old game, where everyone twists everyone else’s words around, and uses their revised version of conversations to make someone else look like the bad guy, and no one plays it like the ladies of The Real Housewives of Dallas!

When we picked up with the RHOD crew in last night’s episode, both LeeAnne and D’Andra were still reeling from the events at the “No Tie” charity event last week.  Now, truth be told, these two just haven’t been feeling each other in general, lately.  LeeAnne is feeling snubbed because D’Andra’s been spending a lot of time with her current arch nemesis,  Brandi.  And D’Andra’s spent most of this season digging for dirt about the “real” reason behind LeeAnne’s hesitation about marrying Rich.  Neither has been a particularly good friend to the other, but both are still hoping to get the friendship back on track, and it’s pretty much all either of them can talk about.

LeeAnne expressed her concerns to Rich over lunch, and told him about D’Andra’s misplaced concerns about them “leading separate lives.” Rich, who was clearly tired of hearing about it, agreed that they didn’t lead separate lives, and once again, advised LeeAnne to talk to D’Andra about their issues, and squash them once and for all.

D’Andra’s mother, Dee, on the other hand, had plenty to say on the matter, when D’Andra told her about it.  Dee said that LeeAnne’s relationship with Rich was no one else’s business, and said that maybe LeeAnne wasn’t in a hurry to get married because she simply didn’t really care about the formal paperwork.  She really likes LeeAnne, and thinks she’s “fun,”  and she’d already invited her to her upcoming cooking party, and didn’t want D’Andra ruining her plans.  Furthermore, she  said it was a shame that a bunch of grown women would run around talking about each other and making speculations about matters that didn’t concern them, and when D’Andra tried to explain that she was only pushing LeeAnne to tell her what was happening because she was concerned about her, her mother advised her to stop being concerned about trivial things that were none of her business, and start being concerned about running the business she just agreed to turn over to her! It was solid advice, and D’Andra agreed to take it.

The ladies didn’t see each other until the grand opening party for Cary’s laser treatment center, and for about five minutes, it looked like the event was going to go off without a hitch.  LeeAnne even came face to face with Cary’s husband, Mark, for the first time since she dropped the bombshell allegation that he was running around behind Cary’s back with other men at last year’s reunion, and while she was nervous about a possible confrontation, he was a perfect gentleman.  He came over and hugged her, and told her it was good to see her, as though nothing had ever happened.  Maybe it was the fact that they were at an event for their family business.  Maybe it was because he brushed off her allegations long ago and no longer cared.  Either way, it was a classy move.  It was also a perfect example of why there are no Real Househusbands franchises.  Men just don’t bring the drama!

Anyway, when D’Andra arrived, LeeAnne suggested that they find a quiet place to talk, and the minute they were alone, she launched into her spiel about Brandi, who was also at the event.  But LeeAnne wasn’t interested in interacting with Brandi at all–unless she wanted to “go out in the alley, and throw down.” She explained to D’Andra that she didn’t appreciate Brandi’s comments about her and Rich having an unhappy relationship during the “No Tie” event — especially since the comments so closely mirrored D’Andra’s, which was a pretty clear indication that D’Andra had been doing a lot of talking behind her back.  She said that her relationship was none of Brandi’s business, and that she wished D’Andra would keep her thoughts to herself because she didn’t “feel safe” with Brandi having that much information about her.

LeeAnne went on to say that it “scares” her to see D’Andra spending so much time with Brandi, and that she couldn’t believe that she brought her to the kick off event for “No Tie,” knowing  that LeeAnne never would have invited her.  D’Andra agreed that it probably hadn’t been the best idea to bring Brandi, and said that she’d had no idea that Brandi was going to confront LeeAnne the way she did.  This brought LeeAnne back to her overall point of Brandi being a “bad influence” on D’Andra.  She said that while D’Andra hadn’t been “as lit” as Brandi, it concerned her to see her D’Andra showing up to a charity event drunk before 8pm.

D’Andra said that she never shows up to such events drunk, but explained that she and Brandi had enjoyed a lengthy and boozy lunch prior to the event, and that she saw nothing wrong with having a glass (or bottle) of wine, if she wasn’t going to be working.  Unconvinced, LeeAnne simply replied, “okay.” Sensing that LeeAnne was implying something more serious, D’Andra asked her if she was saying she had a drinking problem.  LeeAnne didn’t exactly deny that was what she was saying, but was diplomatic enough to explain that she was simply “worried” because she knew that Brandi was pretty stressed out at home with the three kids, and often used alcohol as an escape.  She added that D’Andra had a “bigger life than that,”  and said she didn’t want to see her doing the same thing.

D’Andra immediately became defensive, and said that she was actually very “calculating” with her drinking because of her father.  You see, D’Andra’s father was an alcoholic, and actually committed suicide by shooting himself in the head during a drunken rage.  LeeAnne was well aware of this, of course, and D’Andra really couldn’t believe she would make such a hurtful “allegation.” D’Andra was also caught off guard, as she’d thought their conversation had been fairly productive up until then, and that they were making some headway toward healing their fractured friendship.

In the meantime, Brandi was in the next room with the other ladies, and she had plenty to say about LeeAnne too.  When Kameron asked her what exactly had gone on between her and LeeAnne at the “No Tie” event, Brandi quickly gave a downplayed version of her side of the conversation, saying that she had told LeeAnne that she felt she was jealous of D’Andra’s happy marriage and successful business, and that she guessed that must have hurt LeeAnne’s feelings (ya think?!). But then she went on to say that LeeAnne had turned on her, and said that she and Brian had only adopted their son, Bruin, to save their supposed unhappy marriage.  Kameron was dubious, and said that she thought there must have been a miscommunication somewhere, because she doubted that LeeAnne would have been so cruel.  And, in fact, she was right about that.  That’s not what LeeAnne said at all.

What actually happened was that after Brandi finished telling LeeAnne all the reasons she must be jealous of D’Andra, she then went on to say that she knew LeeAnne was “unhappy” in her relationship with Rich. After that, LeeAnne asked Brandi how she would feel if  she said that she only adopted Bruin to save her marriage.  It’s a small distinction perhaps, but if you really look for it, it’s there.

Now, for some reason, Kameron has decided to act as LeeAnne minion this season, so she couldn’t wait to go and tell her all about the version of events that Brandi was telling everybody, and she walked herself right into the room where LeeAnne and D’Andra were having their talk to give LeeAnne her report.  It turned out that that suited D’Andra just fine, because she had declared herself “done” with her conversation with LeeAnne, and excused herself to go speak to the others.

Once they were alone, Kameron eagerly relayed everything that Brandi had told her a few minutes before.  It was clear that LeeAnne didn’t really care what Brandi had to say, except that  Stephanie and Cary had heard it, as well, and LeeAnne has been trying really hard to make amends with them, and regain their trust and friendship after last season.  She said it was annoying to have her words twisted, especially when they weren’t her words at all, and went to find Stephanie and Cary to explain to them how things had really gone down.

But Brandi wasn’t the only one painting an unflattering (and false) picture of LeeAnne.  D’Andra had immediately gone to Stephanie and Brandi, and told them that LeeAnne had accused her of being an alcoholic.  Of course, LeeAnne said no such thing, but what difference does that make, right?! D’Andra was on a role, crying and shaking her fists, explaining to the women how hurtful it was to be called a “drunk” (also not what LeeAnne said) after what had happened with her father.  Of course, Stephanie and Brandi were sympathetic, and clucked and cooed, and told her that no one thought she was an alcoholic.  But here’s the thing: Although she was too nice to say so out loud, Stephanie was starting to get hip to the game.  Neither Brandi’s nor D’Andra’s versions of their conversations with LeeAnne seemed to jibe with the “new” LeeAnne that Stephanie was getting to know.  That LeeAnne didn’t hit below the belt and go for the jugular, and now that she knew her better, she was beginning to wonder if LeeAnne might not be getting a bad rap on purpose.

As the women reconvened in the lobby of the laser center to toast to Cary’s business, LeeAnne took the opportunity to confront Brandi in front of the others.  She wasn’t loud or mean, she simply explained to Brandi that she must have misunderstood her, and that she hadn’t been saying that she was in an unhappy marriage, but asking how she’d feel if she said she was, the way that Brandi had said about her relationship.  Brandi said that what she said about LeeAnne’s relationship was fine because she was simply “stating her opinion,” whereas LeeAnne had been “putting out”  disgusting things about her.  LeeAnne once again tried to explain what she’d really said, but Brandi was too angry to hear it, and continued to insist that LeeAnne had said exactly what she said she had.  Cary, sensing that things were about to get ugly, begged them to have the conversation another time, and for once, they both piped down.

The party began to wind down, and as Brandi and Stephanie left together, Brandi started in on LeeAnne again, saying that she hadn’t really changed at all.  She said that she had called D’Andra an alcoholic because she couldn’t stand that they were friends, and that she was only trying to befriend Stephanie because she knew Brandi wouldn’t like it.  This clearly hurt Stephanie’s feelings.  Was she not good enough for LeeAnne to want to be friends with because she liked her?! Was everything really all about Brandi?! Stephanie assured her that she would not be used by anyone, but it was obvious that she was feeling stung by Brandi’s callous statement.

The show faded to black from there, but this game of Texas Twist ‘Em ain’t over y’all. Stay tuned!