The Real Housewives of Dallas Recap: The Queen of Dallas 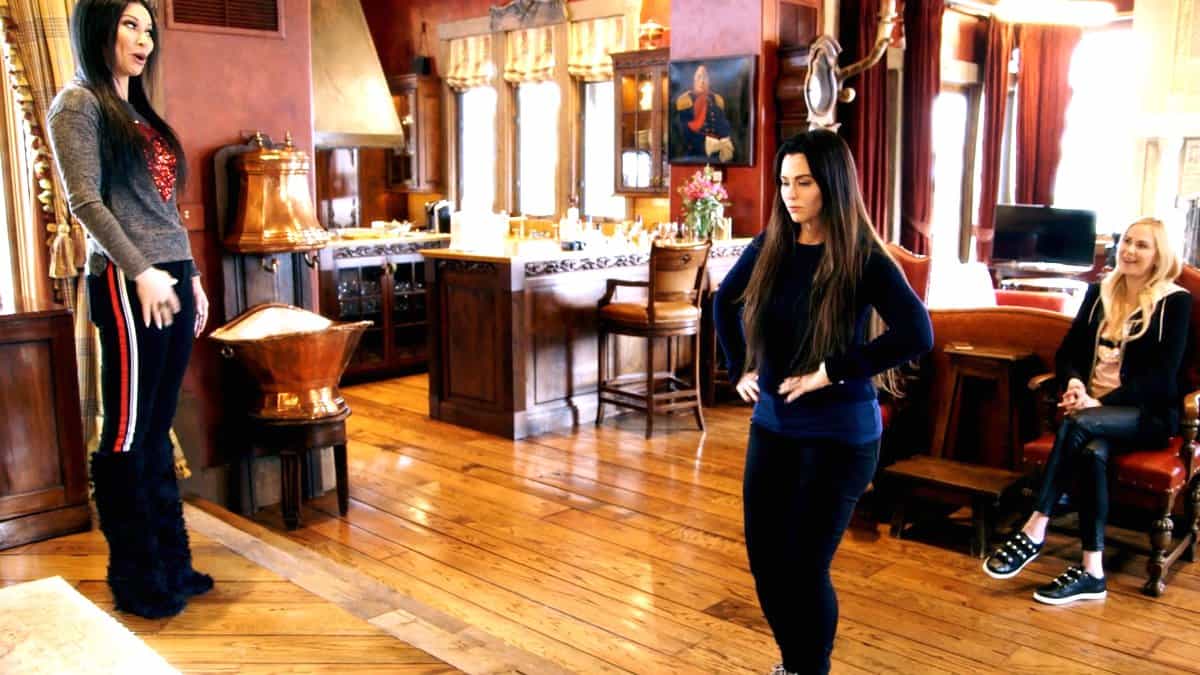 The Real Housewives of Dallas were back with their Texas sized messiness last night, and one thing’s for sure–these women will literally argue about anything.  Any perceived slight, no matter how small, will erupt into a full blown melee, but most of all, they just love to be all up in each other’s business.

When we picked up with the ladies last night, they were still at Kameron’s home in Beaver Creek, Colorado, and Kameron was still going on and on and on about Stephanie telling her to stop “bashing” Brandi for adopting a baby.  You see, Kameron was angry because Brandi hadn’t told her that she’d adopted Baby Bruin until the big Bubbles and Bru party Stephanie threw at her her home to introduce him to everyone.  That’s really all it was.  Brandi adopted a baby, with Stephanie’s help, and only Stephanie and Cary knew about it before the party, which made Kameron feel left out.

Throughout the first day of the trip, which happened to be the first time they were all together since they’d been introduced to the baby, Kameron continued to talk about how much it  “hurt” to be kept in the dark.  Granted, a new baby is a big deal, and it’s an event that most people share with their friends right away. But Brandi chose to keep it under wraps, and while that may seem strange to some, it was her choice and she had every right to tell who she wanted, when she wanted.

But Kameron continued harping on it, and Brandi left the room in tears.  At that point,  Stephanie had simply had enough, and said “we’re not going to bash her for adopting a baby.”  Makes sense, right? I mean, Brandi and Stephanie are best friends, and Kameron  had badgered Brandi to the point of tears over something that wasn’t her business to begin with.  But Kameron got hung up on the word “bash,” and somehow also thought that Stephanie was accusing her of bashing the baby, himself, which certainly wasn’t the case.

Stephanie tried to tell her again and again that she hadn’t said she was bashing the baby, but that she had been bashing Brandi for adopting the baby.  And, of course, she hadn’t really meant that, either.  She meant bashing her for adopting  a baby, and not telling Kameron about it in a time frame she deemed acceptable.  But Kameron heard what she wanted to hear, and the whole thing exploded, with Kameron saying she didn’t want Stephanie in her home any longer.

Stephanie was happy to oblige, considering that she had postponed meeting her family in Italy to make the trip with the ladies.  But everyone was trying to get them both to calm down and let cooler heads prevail.  Cary told Kameron that she needed to knock it off, and learn to let things go.  She finally agreed, and admitted that she had taken things too far by saying she wanted Stephanie to leave.  In the end, Stephanie decided to stay, but things were still pretty tense.

As the ladies boarded a shuttle to enjoy a day of snowmobiling, Kameron and Stephanie largely ignored each other, and it was Brandi, who finally bit the bullet, and tried to bring everyone back together.  She began by apologizing to Kameron for getting so emotional the night before, and explained that she felt as though Kameron was making it all about herself, rather than simply being happy for her.  Kameron simply nodded, and regarded her cooly, before she deigned to accept the apology, but then she launched right back into how hurt she’d been that Brandi hadn’t told her about the baby sooner.

Kameron also finally apologized to Stephanie, but it came with a big but.  She told Stephanie that she needed to be “more careful” with her words because accusing her of “bashing a baby” was way out of line, and was something she would just never do.  Stephanie tried to explain (AGAIN) that she hadn’t said that, but Kameron wasn’t having it, and insisted (AGAIN) that she had said it.  Ugh…here we go again!

But just before things could take a turn for the worse, a voice of reason emerged.  LeeAnne, of all people, piped up to say that Kameron was getting so  “hung up” on Stephanie’s words that she was ignoring the message behind them, and just like that, all was right with the world again.  Who is this new LeeAnne? First, she doesn’t drink and get loud with the other ladies, and now she’s giving advice and leading them toward friendship in a calm and mature manner?! Has hell frozen over, or what?

But it worked, and everyone was happy again.  D’Andra was even moved to try to talk to Brandi, and try to squash their issues.  D’Andra approached her quietly, away from the other ladies, after they’d gotten to the top of the mountain, and broached the subject of the comments she’d made about Brandi abusing Adderall.  Brandi was rightfully upset that D’Andra would say such a thing about her, particularly since she has ADD, and only takes Adderall because it was prescribed by her doctor.  D’Andra had insisted that she hadn’t made the comment about Brandi, specifically, and had actually been talking about all the women (is that better somehow?) but Brandi hadn’t bought it, and things remained tense between them.

But this time, D’Andra explained that what she’d said had really been about herself, and revealed that she had ADD, too, and took medication for it.  Somehow, that admission was all it took for Brandi to forgive her, and the two women laid down to make snow angels to celebrate their renewed friendship.  It was all a little too easy, if you ask me.  So what if D’Andra has ADD? That doesn’t make it okay for her to go around talking about Brandi, and publicly accusing her, or even all the ladies, as a whole, of abusing a prescription medication.  But hey, Brandi was fine with it, so I suppose I should be too.

With everyone happy and friendly again, the ladies sat down for lunch and enjoyed more drinks.  LeeAnne abstained, yet again, and only took a tiny sip of her shot.  Overall, the ladies enjoyed themselves and entertained each other with talk about who would eat whom, should they ever get stranded on a mountain.

Back at the house, the ladies had more drinks, and Brandi got flirty again.  This time with D’Andra.  It was clear to everyone that they had cleared the air, as Brandi treated D’Andra to a strange massage/lap dance combination that everyone seemed to enjoy. After that,  Stephanie took her early leave to join her family in Italy, and Brandi and D’Andra took their friendship on the road for a test drive.

To everyone’s surprise, the two women went to Vail to explore the town and shop together.  They happily took more shots, posed for selfies, tried on cowboy hats, and said “whoo hoo” a lot, as they toasted to being “best friends.”  It was, without a doubt, the quickest reconciliation on record, and the other ladies couldn’t believe they had rebounded from their drama so quickly.

Everyone was in great spirits as they went to dinner, and, of course, had more drinks.  Brandi brought up an argument LeeAnne and D’Andra had off camera the night before, during which they’d both insisted that they were “the queen” of the RHOD crew, and announced that they were going to have a “pageant” to determine who the real queen was.  Like any pageant, it started with questions, which LeeAnne handled like the pro pageant princess she is.  After all, she has competed in 7 pageants (“all televised”) including Miss USA.  She began by talking about her hands, which she said had been touched by God, and enabled her to pray, and reach out to others.  Cary whispered that she also used them to “choke people,” but LeeAnne either didn’t hear her, or chose to ignore it.  Again, who is this new LeeAnne?

After Brandi asked D’Andra a question about flatulence, and D’Andra managed to work the word “gaseous” into her answer, the pageant seemed to be tied, but then Brandi said D’Andra and LeeAnne should ask each other a question, and that’s where things started to go off the rails again.

D’Andra went first, and asked LeeAnne why she and Rich hadn’t gotten married yet.  See? All up in each other’s business.  LeeAnne took the question in stride, and said that things had been difficult between she and Rich ever since he’d been blinded.  She said the ordeal had changed him, and she was just trying to be patient with him while he worked through it.

When someone says something like that, most people would just let it go.  But D’Andra’s not most people.  She said that LeeAnne’s answer was too convenient, and wanted to know what she and the rest of the ladies were supposed to tell people when they asked why LeeAnne and Rich hadn’t tied the knot yet.  LeeAnne told her that they should tell people that she was happy, and would get married when she was ready, and most of all that they should mind their own business.

But Cary could also tell there was more to the story, and she asked LeeAnne to explain it just for them.  LeeAnne then changed course, and said the hesitation was all her.  She added that she didn’t want to “force” Rich into marrying her, and that the fact that he’d been divorced three times before meant that divorce was an “option” for him, and she didn’t want their marriage to end up the same way.

Again, most people would let the subject drop at that point. LeeAnne was clearly getting uncomfortable and the other ladies were squirming and trying to avoid looking directly at her, but still, D’Andra pressed on.  She said that enough was enough, and that Rich and LeeAnne had been together for 9 years, and needed to get married already. She told LeeAnne to “get it together, b***h,” and said that Rich was embarrassing her with such a long engagement, and that she wanted to know what was “really” going on with them right now!

At this point, LeeAnne began to cry, and the other ladies rushed to her side to comfort her.  But before she could confide in them, they noticed that her false eyelash had come loose, and Brandi and Cary busied themselves reattaching it.  When they finished, they told LeeAnne to take her time, and get married when she was ready.  D’Andra sat watching suspiciously, sure that there was a lot more to know about the true nature of Rich and LeeAnne’s relationship, but in the interest of enjoying the rest of the evening, she finally opted to let it go.

The following morning, it was time to leave, but Brandi announced that before they boarded the private jet, they needed to determine the Queen of RHOD once and for all, and announced a “talent” competition.  D’Andra chose butt darts as her “talent”, which involved squeezing a quarter between her cheeks and dropping it into a shot glass, and just when they all thought it couldn’t get any worse, LeeAnne performed a rap song that made everyone long for butt darts.  D’Andra won by a landslide.

Well, that’s another Housewives girl trip in the books, and everyone pretty much escaped unscathed.  But they may not be so lucky next week.  It seems LeeAnne gets a little jealous of D’Andra and Brandi’s renewed bond, and tries to put it asunder. Stay tuned!

TELL US – THOUGHTS ON THE LATEST REAL HOUSEWIVES OF DALLAS EPISODE?