The Real Housewives of Dallas Recap: A Badger in Beaver Creek 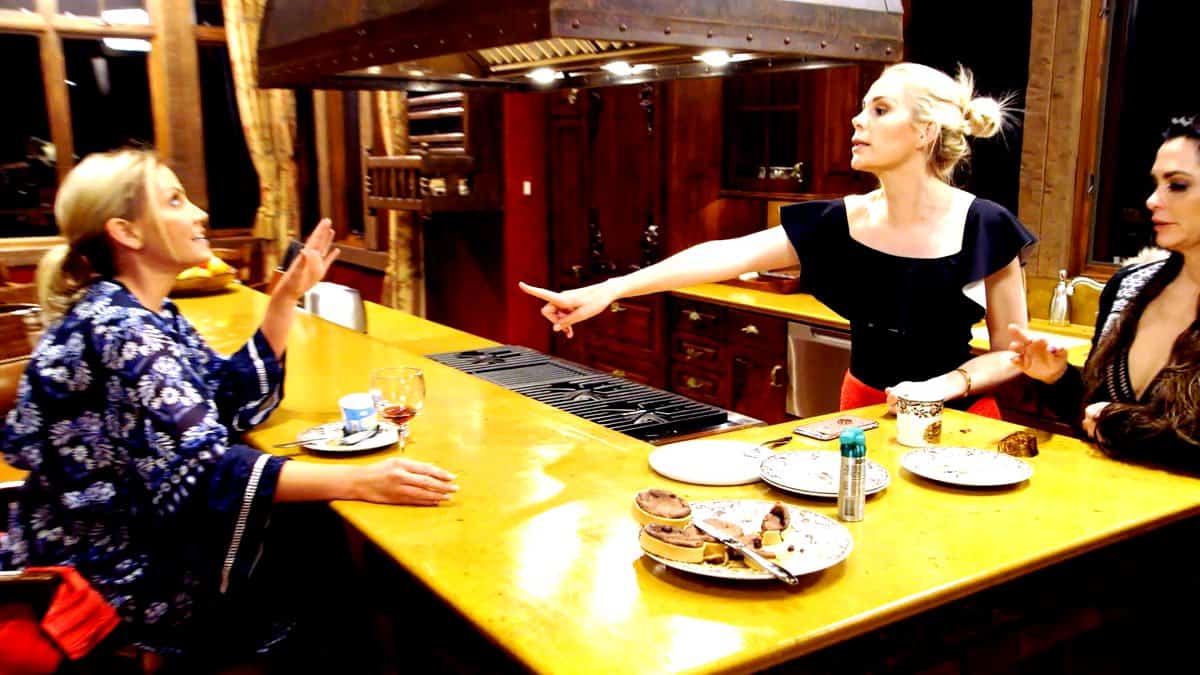 The ladies of The Real Housewives of Dallas actually seemed to be getting along pretty well for the first two episodes of the season, but somehow it all fell apart last night.  Not surprisingly, a girl’s trip was to blame.

I think the crux of the problem was over confidence.  The ladies were so thrilled to be in such a good place, that Kameron suggested they all take a trip to her family’s estate in Beaver Creek, Colorado to bask in the glory of their newfound bond, but if they’d just been honest with themselves, they would have realized that trouble was already brewing  before they ever left Dallas.

When we picked up with the ladies, they were all still at Stephanie’s “Bubbles and Bru” party, which had been thrown to introduce Brandi’s adopted son, Bruin to all the ladies.  Stephanie and Cary had been the only ones who knew about the adoption, and everyone was surprised and thrilled to see the Redmonds descend the staircase with their adorable ginger baby boy–except for Kameron. From the moment she realized what was going on, Kameron seemed angry to have been left out of the big secret, but she put her feelings to the side and congratulated the family.

D’Andra offered her congratulations, as well, but it was clear that there was still tension between her and Brandi, so Brandi attempted to squash it then and there.  She asked D’Andra point blank about claims she made about Brandi abusing Adderall, but D’Andra just refused to come clean.  She said that she had been making a blanket statement about all of the women using the drug, and hadn’t said anything specifically about Brandi.

But Brandi wasn’t buying it.  She said she’d heard about what D’Andra had said from a very reliable source (Cary), which she refused to name.  She added that it was particularly egregious because she’d struggled with ADD since childhood, and was taking Adderall because it had been prescribed by her doctor. To her disappointment, D’Andra continued to deny that she’d said anything wrong.

A little later D’Andra spoke with Cary, and expressed how angry she was about Brandi confronting her, and wondered where Brandi had gotten her information.  Cary freely told D’Andra that she’d told Brandi everything she’d said about her.  D’Andra still denied speaking about Brandi specifically, despite the fact that Cary reminded her that she’d made comments about Brandi’s “sleepy eyes” on several occasions.  Unable to just admit she’d been wrong, D’Andra said she was “over it,” and wished everyone else would get over it too, but in the meantime, “Brandi could enjoy her baby and her Adderall.”

Brandi had better luck when she took LeeAnne aside to talk about their issues.  Both women said they wanted to get back to being friends, and although LeeAnne admitted that she was still stung by Brandi’s comments last year about “not seeing a future” for their friendship, she decided to let it all go,and try to move on.

So, you see, there was tension all over the place, but the trip was on, and the women were wheels up to Beaver Creek just a short time later, decked out in the matching monogrammed pajamas Kameron had made for them…except for D’Andra.  She felt her PJs were “unflattering,” and refused to wear them.  She’s becoming quite the diva these days!

The ladies were disappointed that she hadn’t played along with their PJs on the PJ (private jet) plan, particularly Kameron, who “worked really hard” on it, meaning she bought the pajamas, and had a monogrammer “on call.” I know what you’re thinking, who has a monogrammer on call? But this is Kameron we’re talking about, so…

Any way, despite the pajamas, the ladies were in a great mood on the plane, as they discussed all the fun they were going to have in Beaver Creek.  Poor things…they just had no idea what was coming.

When they touched down in Colorado, Kameron announced that they’d be making a stop at Beaver Liquors (insert 7th grade locker room joke here) to get cocktail supplies for the house.  The place was just as classy as you’re imagining, and much to the delight of the ladies, offered all manner of novelty items that played on their naughty name, in addition to alcohol, which they bought A LOT of.

Stephanie and Brandi decided to have a little fun with the usually uptight Kameron, and bought a raunchy poster to hang in her stunning, and very proper ski house.  And this place really was seriously off the chains…definitely not the place for such filth at all.  The “house” looked more like a ski resort, complete with an elevator and a bowling alley, and when Kameron discovered the poster taped to her bed, she removed it immediately and reprimanded them..just as they’d hoped she would.

When the ladies settled in for dinner, they began to play a drinking game, in which they had to answer a question honestly, and then take a shot.  LeeAnne was game for the honesty, but wisely stuck to water.  She said that alcohol made her “more vulnerable” to taking offense, and she wasn’t interested in “altering” her personality at that point in the trip.

Everyone was already a little tipsy, and Kameron brought up the party, and how left out she felt when she’d learned that Brandi had adopted a baby and hadn’t told her about it.  She said she’d felt like an “idiot” after realizing that Stephanie had tried to throw her off the scent by saying that she was using a surrogate to have a baby, instead of just telling her that Brandi had adopted a son.  Stephanie apologized, saying that she hadn’t known what to say when Kameron had guessed that the party was about a baby boy, and simply hadn’t wanted to ruin the surprise.  Cary told Kameron to stop being a “badger,” and just let it go.

As the game got going, Brandi was asked which was the best indicator for what type of lover a man was, the way he dressed, the way he kissed, or the way he danced? Brandi mentioned how beautiful she thought Kameron’s lips were, and suggested that they kiss each other, and find out.  Kameron declined.  When Brandi said that she’d only been with one person in her life, and that Kameron could be “number two,” Kameron declined once more, and said she thought Brandi’s number was “more like 50.”

But Brandi was undeterred, she walked over to Kameron, and jokingly got in her face, and attempted to kiss her.  She said she knew that Kameron didn’t like her, but that it was only because she didn’t know her that well.  Kameron said that no, she didn’t really like her, but that it was actually because Brandi had “chased her down the beach with a d*ld0” last season, and that’s something Kameron just doesn’t do (she has a whole list).

The behavior turned even more flirty after dinner when the ladies decided to skinny dip in the hot tub.  LeeAnne once again begged off.  She figured too much alcohol and a bunch of naked friends in a hot tub could only lead to trouble, so she took her glass of water, and turned in for the night.  The ladies said they were “concerned” and wondered why LeeAnne seemed so “down,” but they’d soon wish they’d all followed her lead.

Back in the house, and even drunker, the ladies sat in the kitchen talking, and the topic soon turned back to Kameron being left in the dark about Brandi’s adoption, and how it made her feel like they weren’t really friends.  Stephanie had had it at that point, and told Kameron that the adoption hadn’t even been planned, and that they weren’t going to just sit here and “bash her for adopting a baby.”

After a few more attempts at clarification, Stephanie left to go check on Brandi, who was still sobbing.  Stephanie was incensed that Kameron refused to listen to reason, and said she just wanted to get the “f**k out” of the house. The feeling was completely mutual.  In the other room, Kameron was still going off, and told D’Andra and Cary that she wanted Stephanie out of her house.

What a mess! The show faded to black from there, but the trip isn’t over…and neither is the fighting.  Next week’s previews show Stephanie taking an early leave, and D’Andra and LeeAnne going head to head over LeeAnne’s wedding plans. Stay tuned!

TELL US – THOUGHTS ON THE LATEST RHOD RECAP? DID KAMERON OVERREACT TO THE ADOPTION SECRET? OR DID SHE HAVE A RIGHT TO BE UPSET?