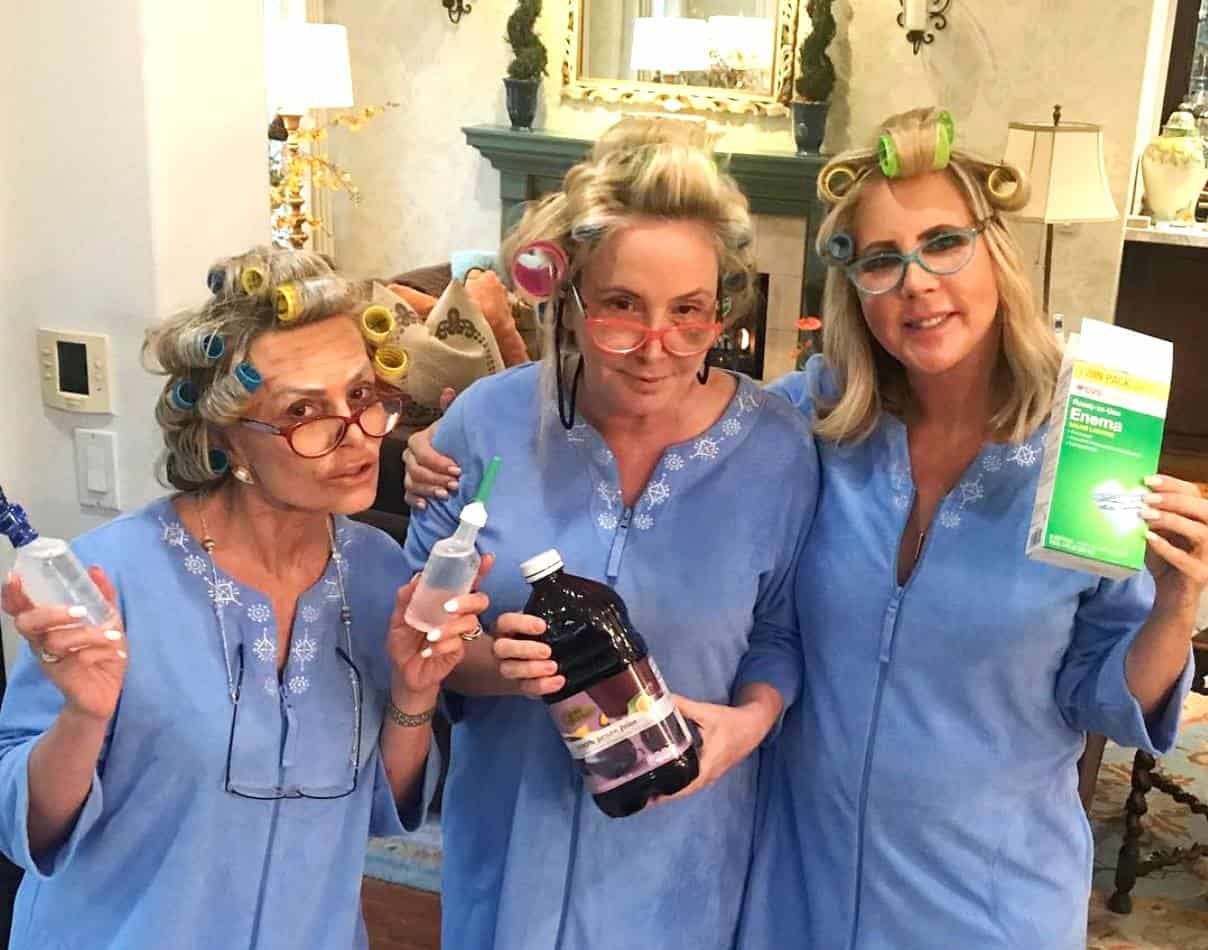 This a tale of two different teams: the sequined gang vs. the old ladies. We all knew it was gonna come to this, but true friendships emerge on this episode of the Real Housewives of Orange County.“I definitely think the casita is a new chapter… Not a best-selling chapter…” but a chapter nonetheless in Gina’s life. I suggest we play a game called how many times can Gina say the word “casita?” My goodness. WE GET THE POINT. Kelly comes over to help Gina move some things to…you guessed it…her casita. Kelly spots a picture of Gina’s soon-to-be-ex-hubby and she suggests that she will happily take Gina’s “leftovers.” That’s soooo Kelly.

At casa Vicki, Tamra pops in to visit the patient. Steve, the saint, is STILL there despite having to see Vicki in that form post facelift. Tamra pretends to be a good friend, but she jumps right in filling a heavily medicated Vicki in on the Gina drama. I would say that Vicki is surprised, but I’m not quite sure what emotion her newly plastic face is showing. Tamra rambles on and mentions Gina’s upcoming birthday party. Seems like it’s gonna be huge, as “every year” Gina wears “sequins,” but alas, we all know the “tres amigas” would rather trim their toe nails than support that sh*t twalking Gina.

In the meantime, Gina and Kelly cruise over to Gina’s casita. Obviously, they cannot stop twalking about Tamra and Shannon. Kelly does her best to remain neutral and helps Gina work through her sh*t. Gina shares how she has never been on her own before. She is well aware that she is going to have to grow up a lot now and things don’t seem to be getting easier for Gina. Her anniversary is just a few days away and Gina leans on Kelly for advice about handling children throughout the divorce.

Emily, still trying to remain relevant, preps for a “cup party.” Somehow, despite her two professions, Emily is able to swing a late evening rager. Tamra is the first to arrive, even though she doesn’t “buy into” this whole voo-doo business. Once Gina plops down next to Tamra, ya’ll know this is not gonna end well.

Meanwhile, Kelly heads to her daughter’s theatrical performance of “Oliver.” Kelly beelines over to her ex-husband, Michael, and the two flirt shamelessly. Michael compliments Kelly. Kelly pinches his cheek… You know, normal divorced couple behavior. Kelly shares that “It feels good to sit next to Michael.” All I know is that I want to see their hands in this dark theater if you know what I mean…. Jolie did an awesome job and Kelly even lets Jolie know that “if you ever wanna transition, you look awesome as a boy.” Amazing.

I’m sorry, but I didn’t realize cup readings had to do with Shannon. WHY DOES EVERYTHING HAVE TO DO WITH SHANNON? Tamra sits back, but is perplexed. Is Gina a sh*t-stirrer? Is Shannon a liar? Can’t we just get our tea leaves read already?! After much ado, it’s time for their readings. We get a very vague, general reading for Tamra and Emily’s told “good luck.” LOL. Gina is asked if she is single and then who is the woman with “SH” name? According to the reading, Gina should help this woman. Gina is clearly not concerned since she has no problem discussing her upcoming sequin birthday party. Nothing gets this girl down, huh?

Gina and her GF Tatiana are prepping in the CASITA. Today’s Gina’s sequin party and she is doing her best to keep it together. Last year her birthday was “rad” because she celebrated with her hubby, but this year things are different. Hey. It’s nothing that a tight sequin dress can’t fix, amiright?

Vicki’s son Michael FINALLY comes to visit his plastic mom. I feel like he’s only here to get his allowance, but Vicki has him come to show him all of her life insurance files. In reality, she is showing Michael where to get all of her “death things.” Michael is over Vicki’s obsession with plastic surgery because it could potentially kill her, but Vicki isn’t ready to give it up just yet. “I’m in Orange County. I’m dating a hot guy. And I don’t wanna look old.” Ya know. Priorities.

Again. Emily is able to get out of work early to seek out her “creative outlet” – aka party planning –aka decorating a table at a restaurant. There are way too many sequin dresses at this table, particularly because the sun is still out. As the glamour girls sip cocktails, Vicki hosts a “geriatrics” party for Tamra and Shannon. Tammy Sue enters dressed as her mother…er, I mean, as an elderly woman. She’s got curlers in her hair and is decked from head to toe in granny attire. Tamra brings Vicki TWO G-D casseroles, an old lady house coat, a boxed enema kit, and some support stockings. It’s not until Vicki asks what Tamra thinks the other girls are doing that Tamra remembers she messed up. Tamra forgot to RSVP no to Gina’s sequin party. WOOPSIE.

Tamra dodges Gina’s FaceTime calls and FU buttons Kelly, but Vicki tries to justify Tamra’s bad memory. Vicki states, “We’ve known Shannon five years. We are Shannon’s friends. Shannon has a colorful, rainbow personality.” Almost on cue, Shannon rolls up. Tamra and Shannon decide to whip out the enema box because really, nothing screams a party like giving each other enemas. Vicki tells Steve she lost her friends because they’re doing enemas and Steve remarks, “oh that’s great.” Yup. That basically sums up how I feel about this, too, Steve.

While celebrating Gina’s birthday, Emily steals the spotlight and starts discussing her “powerful, sexy woman” party that she will be hosting. PUH LEASE. I’d much rather be toasting in jammies with the “three abuelas.” The ladies talk about how much they love each other, but it all comes crumbling down when Tamra answers Kelly’s phone call. Tamra calls HERSELF an a*shole for “forgetting” Gina’s party and it is clear that Tamra is on speaker phone.

The sequined ladies are talking mad smack about the “old ladies” and Tamra fights back by saying, “When you get to a certain age, sequins and nightclubs don’t matter anymore.” Gina does not like that and suggests Tamra run off and “go play bridge.” Tamra hangs up, but takes this moment to let Shannon know that Emily thinks Shannon could be mentally ill. Remember: Emily’s mother suffers from mental illness and Emily sees a lot of similarities between Shannon and her mother. Man. I thought we could make it an entire episode without bringing up this story line, but alas, what else would these ladies talk about then?

TELL US – TEAM ABUELAS OR TEAM YOUNGSTERS? DID TAMRA REALLY ‘FORGET’ TO RSVP FOR GINA’S PARTY?