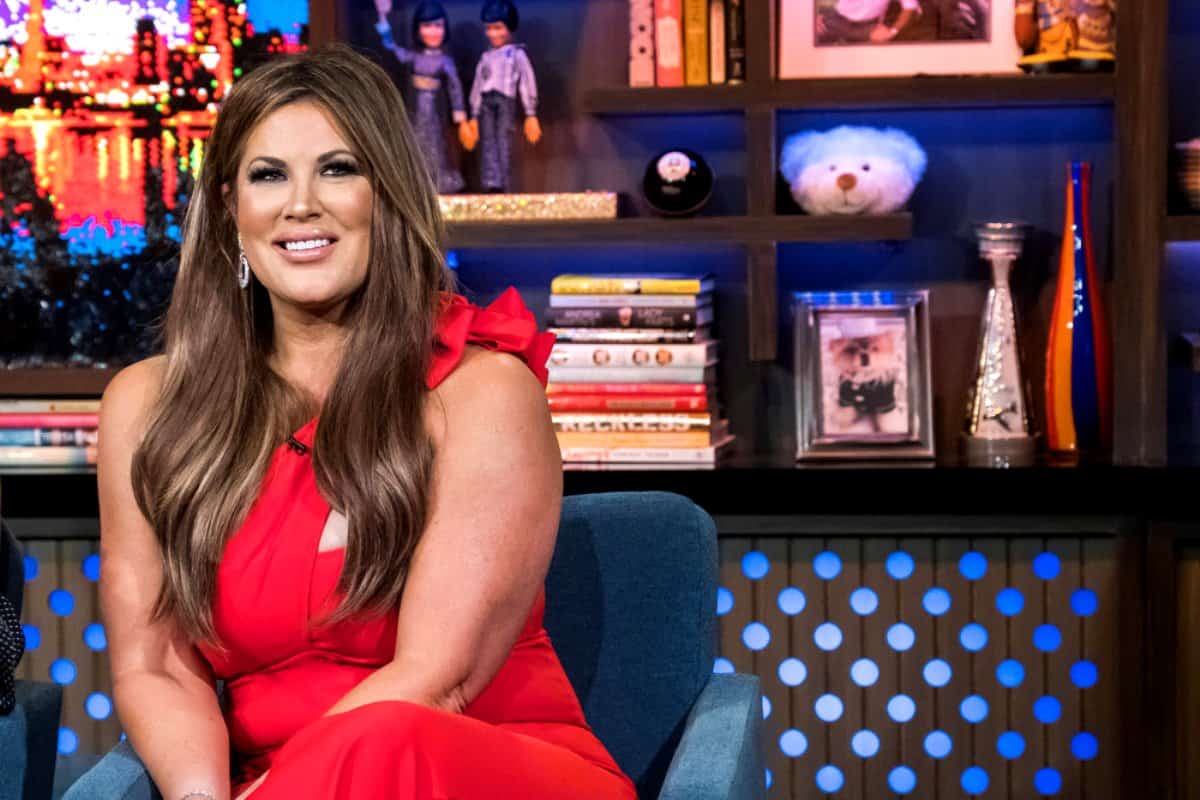 Emily Simpson appeared on an episode of The NotSam Networks’ The Tomorrow Show with Keven Undergaro this week and during her time on the show, she opened up about being a Trump supporter before taking aim at her Real Housewives of Orange County co-stars.

Speaking to Keven, Emily confirmed she voted from President Trump and applauded him for the job he’s done thus far.

“Are you asking me if I’m a Trump supporter?…We did [vote for Trump], my whole family did, ya…I don’t regret that,” Emily admitted. “I mean, I’m probably going to get backlash for this, but, you know. I, I would say I’m, I’m socially liberal. I don’t have, you know. I, I think people should live their life anyway they want to live their life.”

“I just felt like Trump’s, um, views and as far as the economy and jobs and things like that is what I, what, what I align with,” she explained. “I felt like he puts our country, the best interests of our country first and, you know, I mean, I know he’s a little out there and he says some crazy things, but I feel like his intentions at the end of the day are, um, what’s best for our nation as a whole.”

Over the past several weeks on the RHOC, Emily has been at odds with her co-stars, especially Tamra Judge, and at one point, Tamra made it clear that she was not on board with Emily returning for season 14. Meanwhile, according to Emily, it’s Tamra and her two friends, Vicki Gunvalson and Shannon Beador, who aren’t crucial to the show’s success.

“I think the Real Housewives of Orange County will exist whether Vicki is on it, or Tamra is on it or Shannon’s on it, I think the show itself is iconic and it’s the original, and it has a large, you know, audience… I don’t think anyone is that special, that they hold the show, so I think everyone needs to be prepared that it might always be their last season, no matter who they are,” she said.

In addition to her own issues with the cast, Emily’s husband, Shane Simpson, was also involved in a couple of verbal disputes and quickly realized reality television wasn’t for him. That said, he is quite supportive of Emily’s role on the show and actually helped her prepare for the reunion taping last month.

“In the beginning, [Shane] didn’t want anything to do with the show. He, he still doesn’t want himself to do anything with the show. But now that I’m on the show, he’s like my biggest advocate,” Emily said. “He’s, like, ‘you need to know this.’ He wants me to do well because I am on the show. So he, that’s why I, I feel like he, um, he, he looks out for me. He, he wants to know what everybody is saying in interviews; what I need to know.”

While filming is now complete on the 13th season of The Real Housewives of Orange County, Emily continues to be at odds with Tamra on social media.

In what she described as her hardest moment of the show, Emily was seen opening a baby box that was created for her at the hospital after she miscarried her twins. Months later, Emily admitted that while she was glad she finally opened the box, she still doesn’t have closure.

“I’m glad that I finally did it [opened the baby box]. I mean, my therapist said I should do it. I pay her a lot of money. So, I listen to her. So I did it….I don’t feel like I got any closure. And I still get upset every time I talk about it,” she explained. “So um, I don’t know, I mean, I don’t know what the, what the, next steps are or what I really got from it other than, um….I’m glad I read those letters and I’m glad I-I saw the letter from my grandmother. I had no idea that was in there. She died in 2012, right before Annabelle was born. So, I mean it was a gift for me to find that letter from her and to read that….I’m glad that I did it.”

“The response I’ve had from that scene is ridiculous,” Emily added. “There are thousands of messages on my Instagram I can’t even get to. And I try to respond to everyone.”

A video of Emily’s interview is below. Her part starts around the 57 minute mark.

TELL US – DO YOU THINK THE RHOC CAN SURVIVE WITHOUT THE TRES AMIGAS?