The Real Housewives of Dallas Recap: Growers and Show-Ers 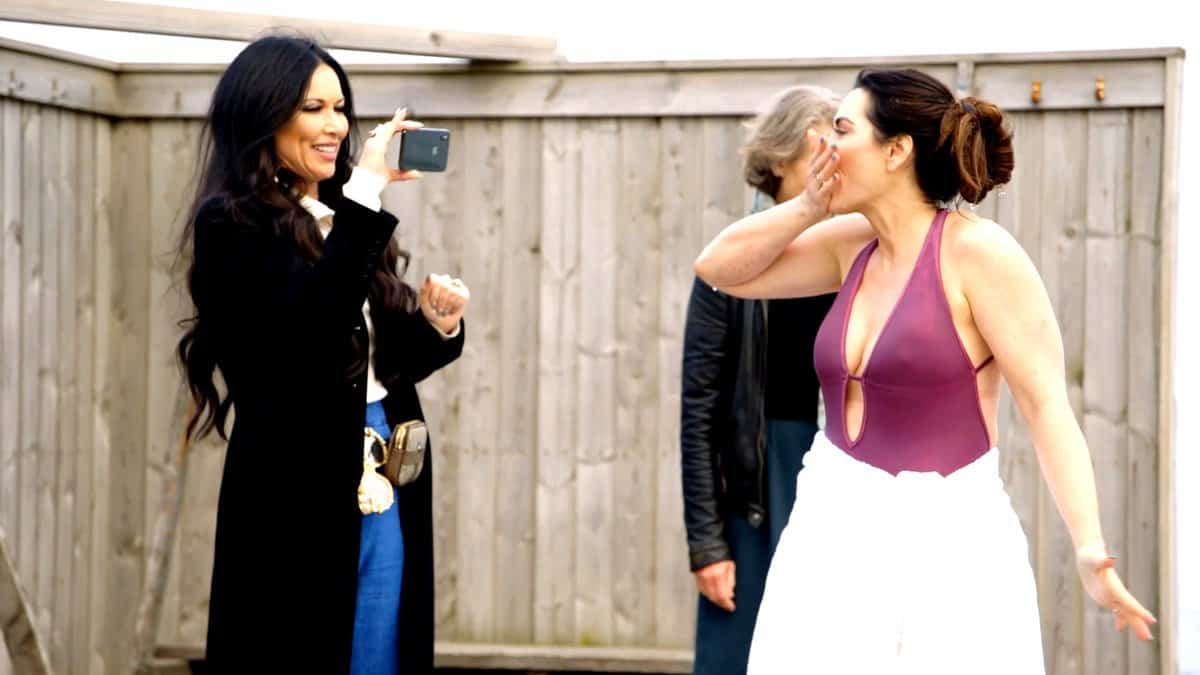 The ladies of The Real Housewives of Dallas returned last night, as they continued taking the quiet, little haven of Denamark by storm.  It was only day two of their trip when we picked up with them last night, but there had already been fights, tears, accusations, and drama all the way around.

In case you missed it, the ladies used the first night of their trip to confront one another with all the baggage they had dragged with them across the pond.  Kameron and D’Andra were angry with each other because Kameron had warned D’Andra that her place in Dallas “society” may be put in jeopardy if she kept hanging out with Brandi, and D’Andra wasn’t having it.  She said she was a grown woman, and Kameron, Dallas society, and her mother-in-law, Jimmi, whom Kameron had enlisted to help show D’Andra the error in her aging debutante ways, could take their opinions and make shoe fly pie (that’s not a direct quote, but I just love the southern shade they throw)!

Kameron didn’t appreciate her mother-in-law being disrespected, although all D’Andra had really said was that she needed to mind her own business, and that she didn’t appreciate the lecture. But Kameron didn’t blow things out of proportion on her own, LeeAnne was right there by her side, and the two had joined forces against D’Andra, as she and LeeAnne nearly came to blows!

Not to be outdone, Brandi decided to put her two cents in, as well, and confronted LeeAnne about the fact that she’d been calling her an alcoholic behind her back.  LeeAnne apologized, but since Brandi was actually drunk at the time, there was no way she could just let the whole thing go, an instead broke down crying, and confided to the women that she had spent a good bit of last year drinking away the problems she’d been having in her marriage.  She was a mess, and as the show came to a close, Stephanie and the others simply escorted her upstairs to their bedrooms (I’m starting to get why LeeAnne and Kameron are so concerned), and once they were gone, D’Andra sat quietly with Kameron, and apologized for her part in their argument.

D’Andra said that Kameron was a wonderful friend, and she admitted that she really did understand her on a level that most people didn’t, as they ran in the same social circles, which is apparently an enormous deal in Dallas.  Kameron sat there receiving the apology, looking as though butter wouldn’t melt in her mouth, but eventually bit the bullet and forgave her friend, and fellow socialite–but that didn’t stop her from going directly to LeeAnne with a post mortem of the entire conversation, which only served to make LeeAnne even angrier.  Where was her apology, she wanted to know?!

The following morning, Cary decided that the women were getting too cliquish (yes, that was just occurring to her) and she decided to separate the besties, in an effort to bring the group together.  That meant that Stephanie and Brandi couldn’t hang out, whispering and speaking their own private language to each other all day, and that LeeAnne wouldn’t have Kameron around to do her bidding for her, and Kameron would have to actually think for herself.

When Brandi heard the plan, and the ladies were decided which group would go biking and which would go boating, Brandi decided to throw some shade, and told LeeAnne that she would love to see her on a bike because she would look like The Wicked Witch from The Wizard of Oz.  LeeAnne wanted to know why she would be The Wicked Witch, as though she wasn’t sitting there with long jet, black hair, talons for nails, and a attitude for days.  She asked Brandi if she was still angry with her, and Brandi admitted that she was.  LeeAnne walked away from Brandi–not really because she cared, but because Brandi was simply an annoyance in her mind, and she was eager to get away.

As the ladies made their way through Copenhagen in two separate groups, they seemed to be having a pretty good time, although the tension between LeeAnne and D’Andra during the boat ride was downright palpable, and when they sat down for lunch afterwards with Stephanie, she encouraged them to talk out their issues once and for all, and let all the nonsense go.  Both women admitted that they loved one another, and wanted to go back to being friends, and apologized to holding on to stubborn grudges over who said what to whom and why.  They then thanked Stephanie for being a calming force for them, and after a few minutes, it was though that tension had never existed.

But at just about that same time, Cary and Kameron were telling Brandi that her Wicked Witch comment hadn’t sat well with LeeAnne, and that she’d been hurt and confused about why Brandi was still holding on to their issues.  Brandi allowed it to stew, and in classic Brandi form, chose to bring it up only when they were all dolled up in their Dutch maiden costumes, drinking beers at Tivoli, an amusement park of all places.  But LeeAnne wasn’t amused.  Brandi was being an annoying mosquito again, and LeeAnne was pretty sure she was trying her best to bring out the “old LeeAnne.”  But she wasn’t going to fall for it, even after Brandi edited her Wicked Witch dig, and called her The Wicked B***h instead.

LeeAnne continued to be zen, and let it go, but it was becoming clear that everyone else was beginning to get annoyed with Brandi.  I mean, they were on vacation, for crying out loud, and the childish nonsense was getting old.  Cary hoped everyone would let it go in time for them to all visit the home of her dutch cousins.  She hadn’t seen them since she’d visited Denmark as a teenager, and was anxious for her friends to make a somewhat decent impression.

It all went pretty well–at first, and Cary’s husband, Mark and her little girl, made a surprise appearance, which thrilled her to no end, and made the rest of the women tear up at the sweet gesture her family had made for her.  After a pleasant, if not unappetizing lunch of pickled herring, it was time to jump in the Baltic Sea, whose waters apparently have the power to bring health and good luck, particularly if you skinny dip.  Never one to be shy, Cary stripped down right away, but the others were a little more modest.  D’Andra and Kameron wore bathing suits, while Stephanie and Brandi chose to dive in topless. But LeeAnne stayed on the sideline fully clothed.  Since everyone else was having such a good time, however, she decided to record the moment for prosperity, a move that only reignited Brandi’s fury.

When they got back on the shuttle to head back to the hotel, Brandi immediately confronted LeeAnne about taking inappropriate video of her, so she could use it against her later.  Now here’s the really big question: had Brandi somehow forgotten that she was on national television, and that anyone of millions of people could use that video against her?!  But LeeAnne went along with her tirade, and apologized for taking the video.  She deleted it immediately, and showed her that it was gone, but Brandi wasn’t buying it.  She said that LeeAnne hadn’t changed a bit, and that all of this newfound zen was nothing but a charade.  She added that the minute LeeAnne got angry with her, she would unearth the topless video, and show it to any and everyone.  Again, any and everyone already saw it, so it was a ridiculous argument, but I digress.

LeeAnne tried to remain calm, and told Brandi that she wasn’t going to get mad at her, because try as she might, Brandi simply wasn’t going to get a rise out of her. D’Andra and Stephanie, who had watched LeeAnne delete the video from her phone, tried to back her up, and assure Brandi that it was gone, but Brandi was unconvinced, and it only seemed to make her angrier that the others were jumping in to take LeeAnne’s side.

It was the last night in Copenhagen, and everyone just wanted to enjoy one last dinner out–even if it did involve eating shrimp with the heads still attached.  But Brandi was having none of it.

As the women discussed their favorite parts of the trip, Brandi said that LeeAnne’s camera antics had “ruined” her good time, and continued to argue about how she would surely use it against her later, despite everone’s assurances that she had deleted it. But Brandi said she couldn’t be trusted, and that if the rest of the women were honest, they didn’t trust her, either.

The show faded to black from there, but don’t think for a second this is over! Brandi has plenty of venom left for LeeAnne…and the other ladies, whom she says are a bunch of “fake b****es”…stay tuned!

TELL US – THOUGHTS ON THE LATEST RHOD EPISODE? DID LEEANNE HAVE BAD INTENTIONS WITH THAT VIDEO?