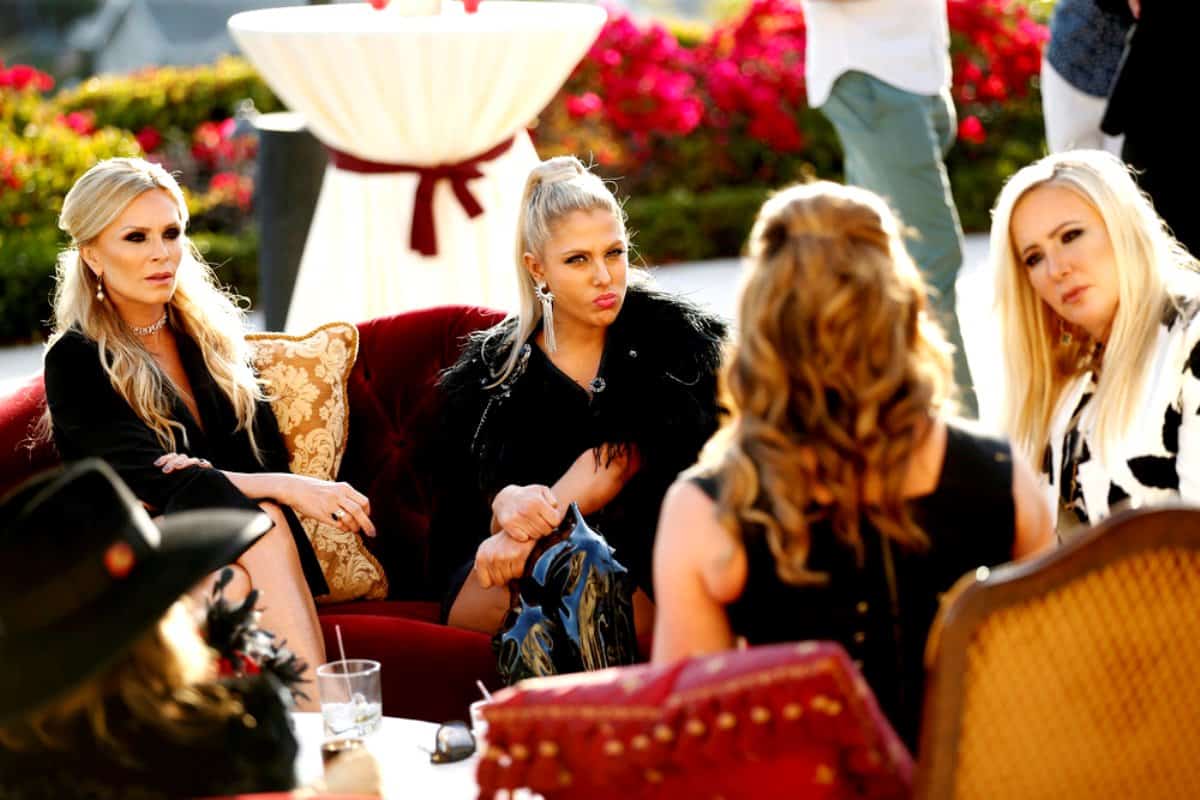 Hard to believe that just like that, this season of the Real Housewives of Orange County is over……JK. It was a pretty long season!

Chef Shannon is still at it- building her business and testing out products on her daughters. I am proud of her for “not relying on her ex-husband,” but I kinda feel bad for her kids as they gag down the trial products for Shannon’s food line. Everyone’s chewing/grimacing until Shannon’s eldest daughter comes out of left field, breaking the silence. She blurts out, “I think I need to start going on birth control for my acne and my cramps.” Suuuuuure. Anyone else think this is a staged conversation? The smirk. The giggling. The side glances to the camera. I’m onto you, ladies…

Oh yay! We are in for a treat- a “Simpson” party hosted by the lawyer/party planner extraordinaire, Emily. Over at the Wicked Chamber store, Emily meets with Kelly and Tamra to pick out some “confident, seductress” like outfits and décor. According to Emily, “every single woman has that femme fatale inside of them that just wants to come out.” I’m not even 100% sure that Emily knows what the phrase “femme fatale” means, but ya better believe Emily is finding any excuse to wear a corset.

Naturally, Gina phones whilst the women are trying out whips and trying on wigs. Gina casually asks to speak to Tamra, as the women have not addressed the whole Tamra skipping Gina’s birthday party incident. Gina, obviously states, “I’m gonna be at my casita tomorrow…” and she thinks it would be a good idea to talk over the newest problem in her friendship with Tamra. Tamra agrees and we are set up for yet another drawn out, dramatic, finger-pointing segment.

The next day, Tamra heads over to Gina’s casita: aka teenage bedroom. Gina becomes emotional right off the bat. She tearfully explains how “Shannon is telling” Tamra “blatant lies.” Tamra brushes off Gina’s statements, but Gina goes ahead and says Shannon’s “truth is a little skewed.” Gina lets Tamra know she could REALLY cause a problem if these ladies want one…simply by spilling all of Tamra’s secrets about Shannon. In the end, Tamra and Gina hug it out, mainly because Tamra is terrified of Gina’s “threats” to expose Tamra’s true feelings about Shannon.

Emily is at the airport picking up her mother. Emily believes her mother is “on the high, but there’s always that possibility of that low again.” Emily’s mother is diagnosed as depressed, but she seems pretty cool/upbeat, so I guess her therapy has been working. Shane awkwardly hugs Emily’s mother hello and their stiff embrace is painful to watch. It’s a strange familial introduction, as Emily’s mother has never met Emily’s sons. Her mom is clearly upset about “losing a year of her life,” but her smile radiates warmth and I hope they rebuild their relationship.

Watching these chicks get ready for Emily’s party is hilarious. Emily has two women squeezing her into a corset and then we get to meet Kelly’s “date” Alex over at Kelly’s place. He is a total cutie and Kelly knows EXACTLY what she is doing with him. In the meantime, Gina preps for the event. Her son Nicholas asks Gina questions about “her little house,” and this makes Gina nervous because she needs help presenting the divorce to her children. Because Tamra and Shannon cannot do anything alone, the ladies get ready together.

Tamra is confused by the party’s femme fatale theme: “I just don’t get it. All the old ladies with their saggy t*ts and whips…yea, it could be fun.” And just when I think I could finally find something to agree with Tamra about, she decides this party “could be fun.” As they get their faces painted on, Tamra lets Shannon know that Gina is “sticking to her guns” about her story. Naturally, Tamra has to deflect the whole fight and blames stuff on Kelly and Emily. When Tamra and Shannon come together, they can’t help but talk sh*t about everyone else.

Emily’s mother-in-law, Pary, is like Polly Pocket who is decked to the nines. Not quite sure why we danced around Pary this season, but hey, Emily was trying everything to stay relevant, amiright? Emily’s house looks “rad,” in the words of Gina, but I think it is just plain tacky. Remind me to never have her plan an event for me. Gina finally gets dressed over at Emily’s house because, like a 16 year old girl, she was too afraid to put on her hooker-esque outfit in front of her mother. It is HILARIOUS that Pary thought Eddie was Tamra’s SON. The look Tamra gave her…incredible. Also hilarious is the fact that this is like a family party. A family party full of leather and whips.

It’s pretty soon into the party when Shannon sits down with Tamra and Gina. Gina makes it known that a lot of things have been said about Shannon and that Shannon shouldn’t kill the messenger. Shannon tells Gina she is “kind of a pot stirrer,” but it’s about time that Shannon let things go. While this encounter is occurring, Vicki is chatting it up with her wanna-be-in-laws and talks about “her country western wedding” that is never gonna happen with Steve.

In the meantime, Emily and Kelly insert themselves into the Shannon-Tamra-Gina conversation. Shannon “knows for a fact she is making improvements,” and Kelly slur-talks that she is just concerned about her. Emily claims she “never made a diagnosis ever” and Shannon reminds Emily that she threatened to kill Kelly. Emily states, “Shannon, I hope you and I can get to a place where we can go forward,” but we all know she is lying through her teeth. When Vicki robotically plops down, Gina screams out, “You got rid of your gobble-wobble!” That is the BEST thing Gina has said all season. Shannon becomes so wrapped up in the attack..er, I mean chat, with the ladies, that she realizes she is going to be late to her “backstage appointment with Brett Michaels.” Shannon runs off to change and emerges donning her rockstar garb and I am embarrassed FOR her. She is wearing a red bandana around her head and she looks like a bizarro Brett Michaels or his long-lost twin.

Nothing is better than a housewife season finale. The weird elevator music plays in the background while all of the women try to sugar coat their lives in a few short sentences. It goes a little like this: Shannon knows “she will be ok and her kids will be ok.” She has lost 25 pounds and is loving life with Archie as the only man in her house. Gina is finalizing her divorce and she should probably get rid of those “baby making boots,” as sex with an ex is NEVER a good idea.

Vicki can hardly talk, as her facelift is causing strain on her muscles, but you better believe she’s able to accost Steve about a ring and premarital counseling. Kelly is still obnoxious about men and as always, keeps her “bench full” cuz ya never know. This strange Emily and her mom relationship rekindling is def Emily’s final attempt of a story line. Her mom seems like a doll, her husband seems like a troll, and to be honest, it’s goodbye to Emily in my mind. And Tamra…well she has had a tough year, but she’s moving into a gated community with her son…I mean, hubby Eddie.

In the end, Vicki reminds us, “It’s about being transparent and just kind. That’s what friendship is!” And with that, my friends, that’s a wrap on the season! 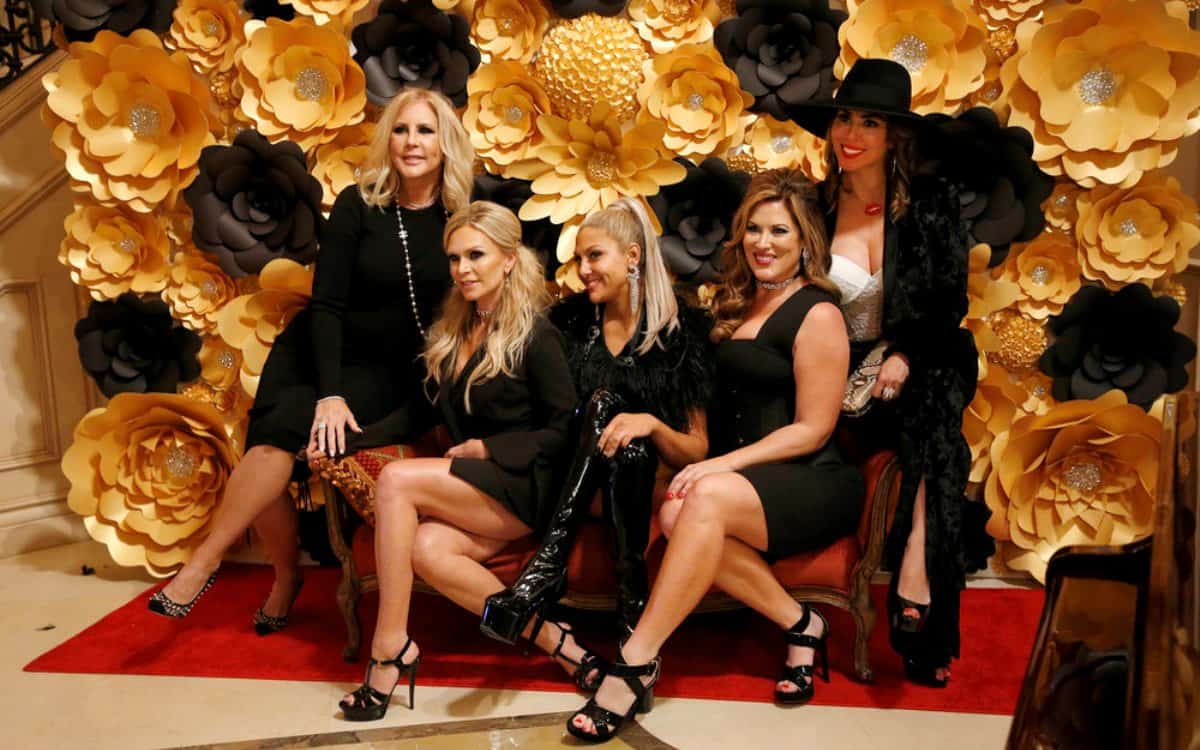 TELL US – THOUGHTS ON THIS RHOC SEASON? DO YOU WANT TO SEE EMILY AND GINA RETURN?!