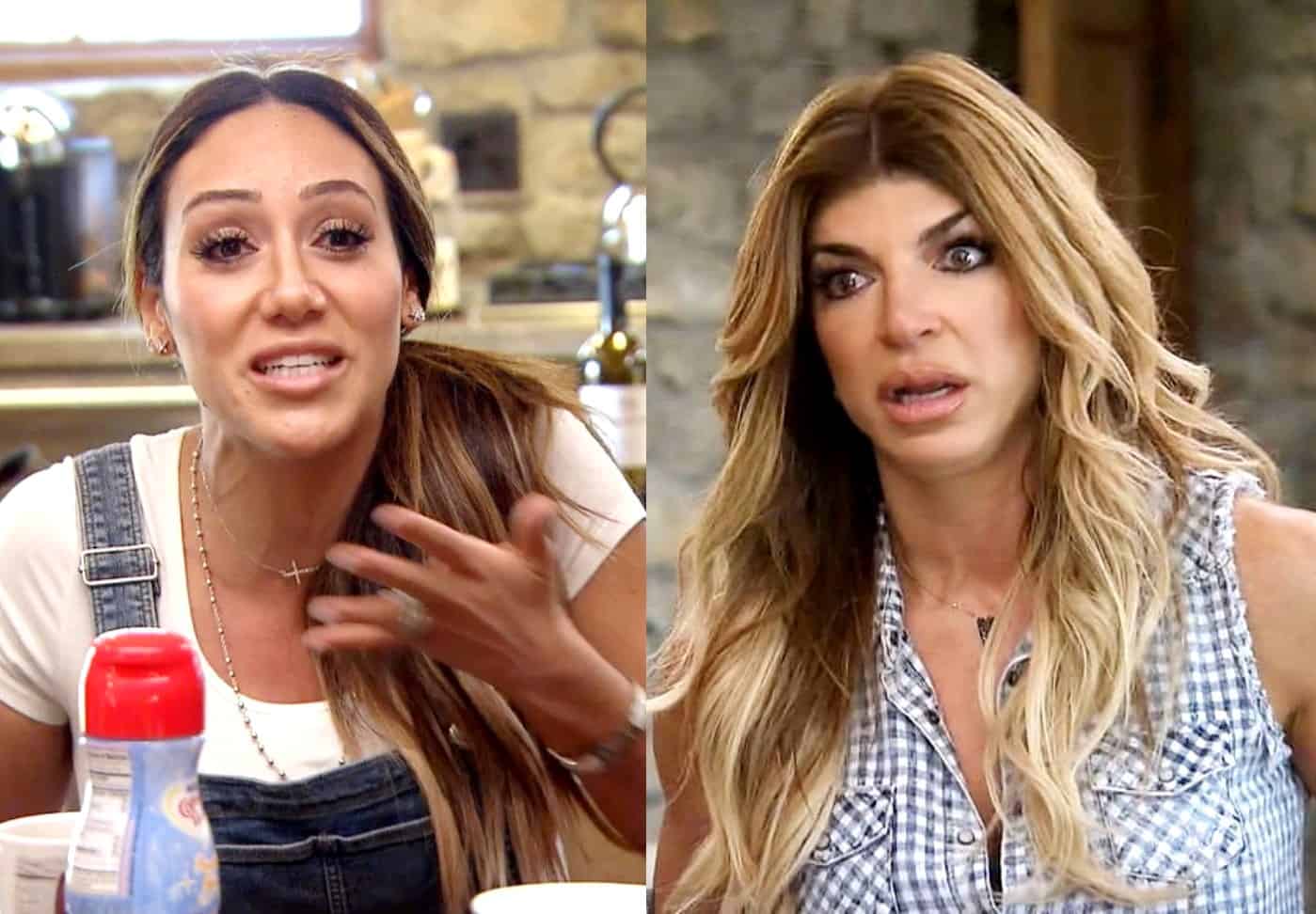 Well, the holiday season is upon us once again, viewers–they seem to come faster every year, don’t they? But this year, as you’re dreading seeing that judgmental aunt who’s always asking when you’re going to find someone nice, and settle down already, or that look on your mother’s face when you reach for an extra helping of yams, just remember you have at least one thing to be thankful for—you’re not a Gorga!

That’s right, Melissa and Teresa were back at it on last night’s episode of The Real Housewives of New Jersey, and things got pretty ugly. And they were getting along so well too.

It all began last week when Teresa began complaining about the fact that, since their mother’s passing, her brother, Joe, had left her to do much of the heavy lifting when it comes to caring for their father, Giacinto, and spending time with him.  Joe’s excuse for not being around for his old man was that he was busy working all the time, which has pretty much been his excuse for everything since we met him.  I mean, everyone has to work, but that’s no excuse to completely blow off your father.  I could completely see where Teresa was coming from.  Her father lives with her, so she’s with him 24/7, and Joe would tell you that family is everything to him, so where the hell is he?!

But here’s where Teresa’s argument takes a left–she blames Melissa for her brother’s absence, which is simply unfair, if you ask me.  Joe is a grown man, and I sincerely doubt that Melissa would (or could) forbid him from grabbing a bite to eat with his dad once a week, or so.  But Teresa insists that Melissa is the culprit, and as the sisters-in-law headed off to Oklahoma with the other ladies, it was clear that she was still angry.

Dolores, who’s known Teresa, Joe, and the rest of the Gorgas her whole life knew right away that something was bothering her, and Teresa didn’t hesitate to tell her why she was so upset at Melissa and Joe.  She also revealed that, as the anniversary of their mother’s death arrived, Joe and Melissa jetted off to the Bahamas, rather that being back at home with her and their father where they were needed.  Once again, she blamed Melissa for the timing of the trip.

But Teresa held it together pretty well.  She mainly avoided having any conversation with Melissa at all, as the ladies settled in and had dinner.  She was pretty quiet as newbie Jennifer regaled them with stories of her Chanel “addiction” and the fact that she just had to have a white grand piano in her new home, despite the fact that no one in her family plays (I can already tell this one’s going to be a chore).

She was also quiet as the ladies dug into the rich, homestyle cooking, and lamented the fact that she couldn’t join them, as she’s still preparing for her bikini fitness competition, and only eating rabbit food.  As she discussed her strict regimen, Jackie revealed to the ladies that she had struggled with anorexia in her youth, and had once been dangerously underweight.

While everyone was sharing, Melissa decided to share a revelation of her own.  She paid a private visit to Concetta, the medium she and Teresa had hired last year to see if she could contact Teresa’s mom, and asked her to try to contact her father, who died in a car accident when she was just 17 years old, and what the woman had to say could be life changing! She told Melissa that she has another sister.  She was stunned, of course, but not really.  She knew her father had a wandering eye, and she clearly remembered a woman that no one knew attending her father’s funeral, and just sitting in the back, sobbing quietly to herself.  She wonders now, if she might have been a girlfriend of her dad’s, and perhaps even the mother to the half sister she never knew existed! It’s a lot to take in, to say the least, and Melissa became choked up as she discussed the prospect of having another sister out in the world somewhere, and how all of it might affect her mother and other sisters.

For some reason, seeing Melissa getting emotional about her father, who had passed away more than 20 years ago, and a sister she wasn’t even sure she had, set something off in Teresa, and she wondered why Melissa didn’t have the same emotional attachment to her in-laws, although the answer to that should be fairly obvious, if you ask me.  But still, she remained calm, until she called her father to check in, that is.  Giacinto told her that Joe was going to come by the following day to take him out, and while you would think that would make Teresa happy, she took it as proof of what she’d suspected all along: Joe had plenty of time for his father, as long as Melissa wasn’t there to “control” his every move.

She immediately went in to the dining room where the ladies had just sat down to breakfast, and confronted Melissa with the “evidence.” Melissa was confused at first, and was pretty much like, ‘Oh great, that’s nice that Joe and his dad are going to have dinner.’ But when Teresa pointed out that it was only happening because Melissa wasn’t there and ‘out of the way,’ she struck a nerve.  But Melissa tried to keep her cool, and asked Teresa if they could please just have this conversation later, in private, which was an excellent idea for two reasons: one, the other women were sitting at the table watching them like they were at a tennis match, and two, Dolores was butting in and added her two cents.  She told Melissa that maybe she didn’t realize that Joe spent time with her in favor or spending time with his father, and that perhaps she could do a better job of encouraging him to spend more time with his dad.  She added that the trip to the Bahamas was horrible timing. Understandably, Melissa informed her that perhaps she could do a better job of minding her own damn business, and turned her attention back to Teresa, who was clearly emboldened by the backup.

Melissa said she didn’t know what the f*** Teresa was even so worked up about, and Teresa said that if she didn’t get it by now, she obviously never would, and that maybe that’s why Joe didn’t get it either.  Melissa asked what there was to get, and Teresa said they didn’t understand that she did everything for her parents, and Melissa said that perhaps that was easier for her to do since her husband, Joe was “away” and she didn’t have him around to cater to.  Now, I was with Melissa right up until that point, but what a stupid argument! Was she seriously suggesting that now that Joe was in prison, and Teresa was essentially a single mother to four daughters – that she somehow had more time on her hands?! Or, and I think I’m on to something here–did she just want to bring up the fact that Joe was “away” because she wanted to twist the knife by bringing up that which shall not be mentioned?

Everyone gasped and acted like she’d just revealed a huge secret, but Melissa was undeterred. She also started making a lot more sense.  She told Teresa that if she had a problem with her brother, she needed to bring it up him, and that it had absolutely nothing to do with her, but that if she kept up with the passive aggressive nonsense, and trying to make Joe seem like the bad guy, he was going to explode.  Teresa told her that, as his wife, she needed to “make him not explode.” Melissa said that she didn’t control her husband or his emotions or reactions, and when Teresa said ‘yes, you do, you’re his wife,’ Melissa asked her if she controlled her husband, and without missing a beat, Teresa said, “Yes”! Seriously?! Is the judge who sentenced her to a year in prison listening to this, because I always thought Teresa’s entire defense was that Joe committed those felonies unbeknownst to her, and that she was an unwitting accomplice, who just signed the documents her husband told her to sign without having a clue what they meant! But I digress.

The ladies then took off on their various activities for the day. Teresa went fishing with Jennifer, Dolores, and Margaret, while Melissa and Jackie bonded over a shooting lesson.  Both Teresa and Melissa could see that the new women were taking their sides in the disagreement, and they were happy to continue throwing digs behind each other’s backs.

A little later, Teresa and the other ladies went shopping, and she asked Jackie why Melissa hadn’t come along with them.  Jackie explained that Melissa was upset and exhausted after their breakfast battle, and tried to smooth things over by explaining that Melissa simply had a different perspective than Teresa did, and suggested that she stop putting her in the middle.  Teresa gave her usual response–‘this is how it works in Italian families.’

In the meantime, Margaret took the time to speak to Melissa alone.  She said that Teresa was probably extra stressed because of Joe Guidice’s absence, and Melissa cut her off, and said that everyone realized that Teresa was having a hard time, but Joe had been gone for a while, and that Teresa’s time for using it as a “hall pass” had expired.  Margaret encouraged her to take to Teresa directly, and let her know how she was feeling, which she did.

Melissa found Teresa in her room, and explains how embarrassing it was for Teresa to confront her the way she had in front of everyone.  She also said that she wonders if Teresa is ever going to treat her like a real sister, instead of like her brother’s “wife,”  a word Melissa said she feels Teresa uses with complete disdain.  Teresa still felt she was missing the point, as all of this was actually about her father, not Melissa (was it, though?). In the end, they agreed to shelve the topic, and make the best of the rest of the trip.  Hahahahaha–yeah right!

The show faded to black from there, but the ladies’ trip to Oklahoma continues next week, and we’ll find out whether or not Teresa and Melissa managed to keep the peace. Spoiler alert..they don’t! Stay tuned.