The Real Housewives of New Jersey Recap: (Un)Bury the Hatchet 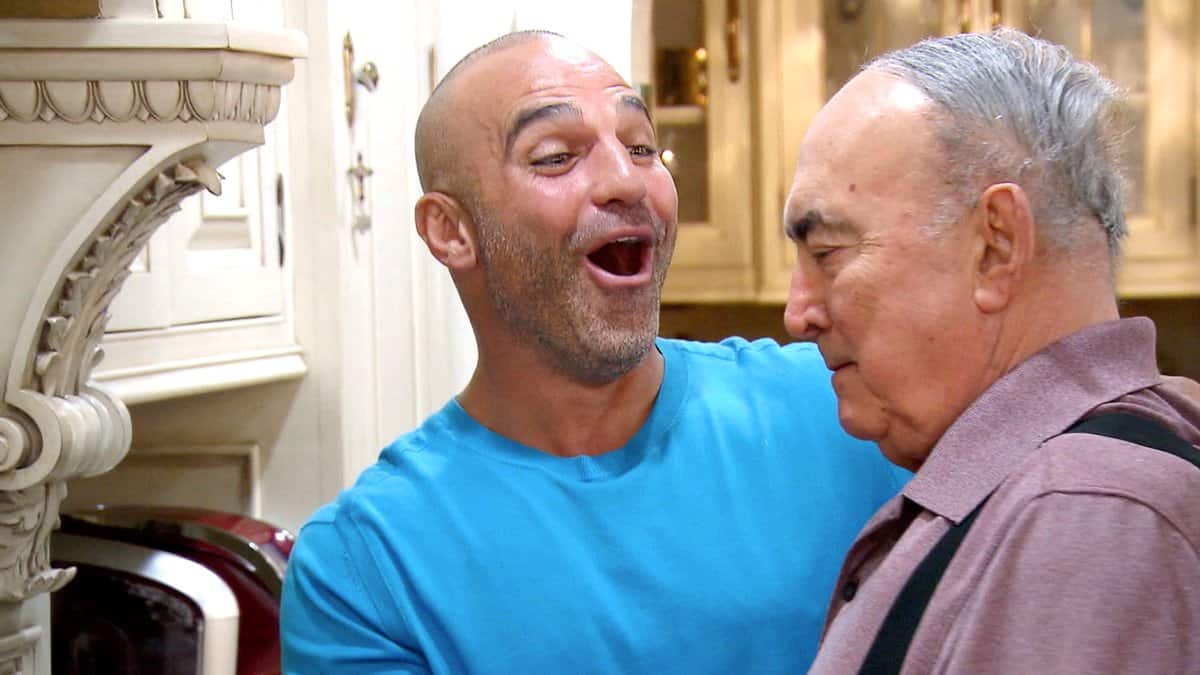 The Real Housewives of New Jersey has returned for its 9th season, and all I can say is that seeing sisters-in-law, Teresa and Melissa getting along so well was nice while it lasted.  That’s right–it appears that the hatchet they buried last season, as Melissa helped Teresa adjust to both the loss of her beloved mother, and her husband Joe being “away,” has been exhumed.  But if I’m honest, it was a little odd seeing them all buddy buddy, a little boring, perhaps, unnatural even, and now it almost seems as though order has been restored in The Garden State.

It all started when Teresa and Joe’s father, Giacinto, began complaining (not for the first time) that his son didn’t seem to be interested in spending much time with him.  Since Giacinto lives with Teresa, since the passing of his wife, she is stuck hearing his complaints, which can’t be easy, and must make her feel a little under appreciated.  After all, she’s with him every day.  And what is she..chopped liver?!  He’s an enormous part of her life, and she even took him along with her and Gia to get mani/pedis at the salon.  And how’s this to make you feel ancient? Gia was the one who drove! I remember when she was five!

Ahh, but time flies and children get older, and Joe’s absence in her “NoNo’s” life didn’t go unnoticed.  She and Teresa discussed it, and both of them felt like Giacinto deserved better, and although they knew Joe would claim his work kept him away, they also agreed that excuse was getting old.  And Giacinto isn’t getting any younger himself (who among us is?) plus Teresa and Joe have already lost their mother. Unfortunately, she passed just after Teresa got away from her own time “away” and she deeply regrets the time she lost with her.  The last thing she wants is for her little brother to live with the same feeling, but she was reluctant to bring it up, as past attempts to discuss delicate family matters have often been met with resistance, silence, and even all out brawls.  I mean, will any of us ever forget the Christening Heard Round the World?! I think not!

And Teresa has enough on her plate, and hardly needs to add an argument with Joe to the mix.  In addition to raising her four daughters on her own, writing bestselling cookbooks, and caring for her father, she was also preparing for her bikini fitness competition.  She’s eating rabbit food, abstaining from alcohol, and now Joe’s dropping the ball?! Please.  And she looks fabulous, but she still got belittled by her trainer, who told her she was “not all that yet” and that she “looked like a pile of s**t” in the tiny bikini she was wearing.  It was brutal–and absolutely fascinating! No one, and I mean no one, talks to Teresa like that and lives to tell the tale, or at least I didn’t think so.  Is our girl slipping?!

She even missed out on Dolores’ hatchet throwing party to go get critiqued.  I know what you’re thinking: What the hell is a hatchet throwing party?! Am I right? Well, it’s exactly what it sounds like.  You go throw hatchets at a target.  And why would one want to do this? Well, honestly, I haven’t the slightest clue, but the ladies seemed to enjoy it.  And its a good thing they did, because Margaret’s presence at the party may very well have ended her friendship with Danielle, who couldn’t believe that Margaret would have the audacity to attend a party (although I think party’s a strong word for it) thrown by someone she doesn’t like.

Now, Danielle’s reaction shouldn’t have come as too much of a surprise, as loyalty is EVERYTHING in New Jersey, but I must say, it was a little over the top–even for her.  After all, as Margaret pointed out, they’re not twinkies–they don’t have to arrive as a matched set. When Margaret stopped by her house for a visit, and casually mentioned that she’d be going hatchet throwing with the other ladies, Danielle became incensed, and told her that she ‘didn’t have her back.’  Then she moved in for the kill.  She asked Margaret what she possibly had in common with Dolores–other than the fact that Margaret cheated on her husband, and Dolores’ husband cheated on her! Ouch, right?! Then she burst into tears, and said that she didn’t want to talk anymore, and left a confused Margaret sitting alone in her kitchen, wondering what on earth had just happened.

Dolores wasn’t the least bit surprised when Margaret told her about Danielle’s reaction.  She knows the two women were friends, but had predicted that it would only be a matter of time before Danielle did Margaret wrong.  She and Margaret are trying to form a friendship, and have recently discovered that they actually really like each other, and she believes that Margaret deserves a much better friend than Danielle, whom she finds crazy at best, and a “scum bag” at worst.  She and Margaret have really bonded, and when Margaret invited the ladies to join her on a trip to Oklahoma to help her promote her latest endeavor, Dolores jumped at the chance.

And really, who wouldn’t? Margaret came up with a genius, and truly thoughtful idea! She created a line of hospital gowns for children that look like costumes, rather than the usual, run of the mill, institutional-looking gowns they usually wear.  The trip to Oklahoma will be spent with the designers and manufacturers that will bring Margaret’s vision to fruition, and the ladies were thrilled to be included, and help in any way they could.

Of course, newbie, Jennifer, just may have jumped the gun a little when she accepted the invitation.  Her husband, Nabil is pretty old school (he makes Joe Gorga look like a feminist!) and wasn’t too pleased to hear that his wife was planning a trip out of town, and hadn’t even discussed it with him ahead of time.  He said that he doesn’t like changing his schedule around, and her absence for two days will force him to do so, in order to take care of their five children.  But come on! These people just bought a 9 bedroom, 16 bathroom mega mansion, complete with indoor basketball court.  I think he can afford to hire a sitter while she’s away.  In the end he relented, and she thanked him for “letting” her go, but her children were no happier to hear that they would be without her services for the weekend, and cried when she told them she’d be taking her first ever trip without them.

Across town, Teresa was planning an Easter dinner (that she couldn’t even eat) for her girls, her dad, Melissa and Joe, and their brood.  Giacinto broke into the wine before Joe and Melissa arrived, which loosened his lips just enough to express his disappointment in his prodigal son.  As expected, Joe said he was working hard, and simply had no time to visit as often as he would like.  Melissa backed him up, and reminded her father-in-law that they had “just” seen him, but according to him that was two weeks ago, and it wasn’t good enough.  Joe and Melissa tried to play it off, but Giacinto wasn’t about to let it go.  He brought it up again over dinner, and Teresa chimed in to tell Joe that he should really make more effort with their dad.

Joe was clearly getting exasperated, and Melissa felt that Teresa was throwing Joe under the bus to their father, and that her timing was terrible.  When Teresa, Melissa, and Joe were alone, Melissa tried to get Teresa to cool it, but she explained that she was the one who had to hear the older man’s b****ing,” and was tired of it.  Enter Gia, who walked into the room in the middle of the argument, and also told her uncle that he was being selfish, and should make more time for his father.  She quite reasonably suggested that he maybe stop by once a week, or so, and just stayed for a few minutes to chat with his dad, but Joe once again told her that he “had to work.” Gia told him that his excuses were weak and played out, and didn’t back down for a second when Melissa politely told her to stay out of grown folks’ business.

Melissa continued to try to smooth things over–but this isn’t over.  This argument is going to follow them all the way to Oklahoma, and it’s only going to get uglier. Stay tuned!