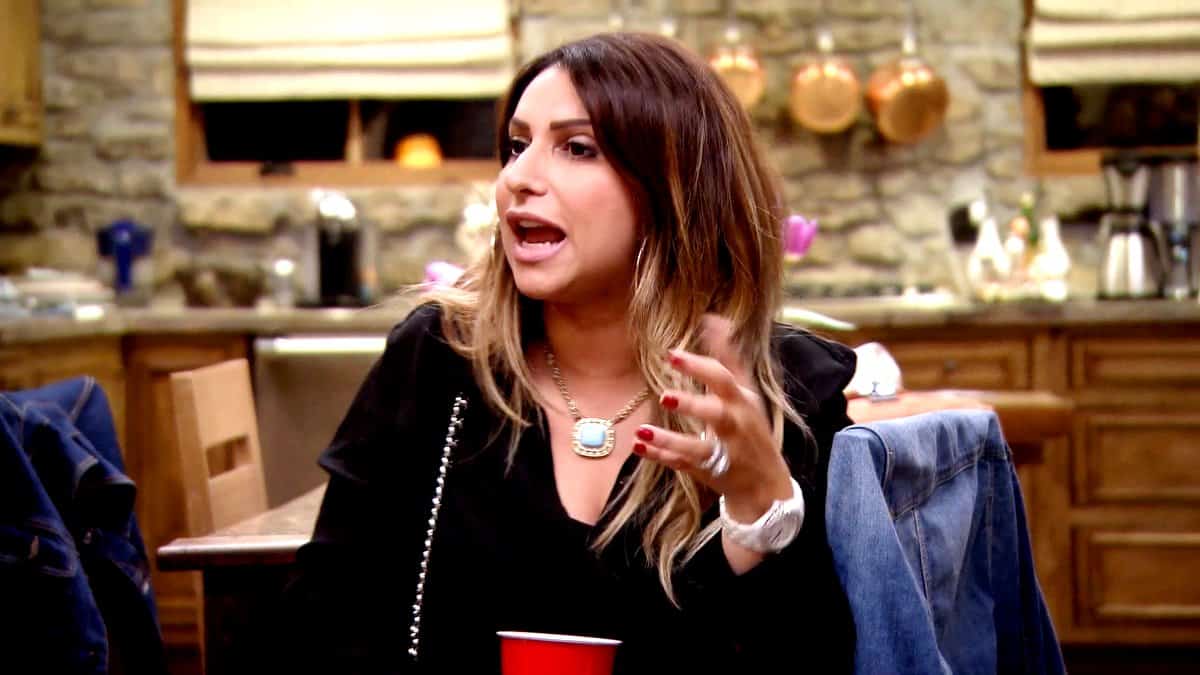 The ladies of The Real Housewives of New Jersey  were back to bring the drama last night, as they continued their fish out of water girls’ trip to Oklahoma.  Seriously, you have not lived until you’ve seen Melissa and Teresa, decked out in Nordstrom’s version of  “cowgirl” outfits, with hair extensions flowing, grooming cows for a cattle show! But these ladies are good sports, not to mention pretty tough broads, who back down to nobody, so….when in Rome!

Teresa and Melissa even managed to get along last night, which was pretty surprising considering the way they went at it last week.  They agreed to squash their beef, at least for the duration of the trip, and they actually kept their word.  Good thing too, because as Melissa pointed out, a fight between those two can ruin anybody’s good time.

As the ladies prepared for their last few nights in Oklahoma, Margaret and Jackie found themselves getting pretty annoyed with Jennifer, and you couldn’t really blame them.  She’s pretty pretentious. I mean, the woman can’t go more than five minutes without mentioning the size of her house, or the money she spends on clothes.  On the way to dinner, she spoke of her nanny, whom she calls her “wife,”  because she cooks, cleans, and looks after the kids.  She’s also very into securing her palatial estate, and said that there were cameras everywhere, including ones that were positioned to spy on the nanny.  It seems she doesn’t quite trust the wife she hired, at least not with her things. She admitted that she often conducts “bag checks” before the poor woman leaves to make sure she doesn’t try to make off with a handful of silverware.

Melissa was particularly impressed by Jennifer’s admission.  She defended her to Margaret and Jackie, saying that any woman who would willingly admit to shi**ing her pants to a new group of friends (not to mention a national TV audience) was a pretty down to earth chick, and they had to admit that she made a pretty good point.

It’s just a good thing they didn’t witness her conversation with her daughter, who may have picked up on some of her mother’s more materialistic ways.  The poor child began sobbing uncontrollably as soon as Jennifer FaceTimed her, but quickly pulled herself together, once she was promised a surprise upon her mother’s return.  At the mention of a gift, she became all business, asking for the “Hello Dream House,” and suggesting that her mother get online to order the $400 toy immediately, if not sooner.

Later that day, the ladies made their way to the cattle show, which is a lot like a dog show, but with cows.  The ladies treated the heifers to bovine blowouts and readied them for their moment in the spotlight, and while they were quite sweet to the animals, none of them are exactly used to farm animals–or the smells that come along with them, particularly Teresa, who feared that the cows may actually be bulls, who would charge at her if they saw red.

In the meantime, back home, Margaret and Melissa’s Joes were busy being the perfect sons-in-law.  Margaret’s Joe was waiting on Marge Sr. hand and foot–literally. Following her face lift, he was doing everything from making Starbucks runs to giving foot massages, and Marge Sr. was eating it up with a spoon.

Joe Gorga decided to show his mother-in-law a good time, as well.  He invited her along for dinner with his dad, Giacinto, and the three kids.  Now before you go giving Joe the son-in-law of the year award, it’s probably worth mentioning that his motivation for asking Melissa’s mom, Donna, to join them probably had more to do with hoping her presence would mean avoiding yet another awkward conversation with his dad about not spending enough time with him, than showing her a good time, but his hopes were soon dashed.

Giacinto, despite the presence of Donna and his grandchildren, was all about the shade.  When Joe wondered about what the women were doing in Oklahoma, Giacinto quipped “other men” (he knows one of the women in question is his own daughter, right?!). And he wasn’t done.  He said that Joe only made time for him when Melissa wasn’t around.  Joe tried to smooth things over, telling his father he loved him, and once again, blaming a demanding work schedule for keeping him away, but it was clear that underneath it all he was seething and dying to confront Teresa about why she felt the need to ‘be in their father’s ear’ turning him against him.

Back in Oklahoma, the ladies prepared to go to a hoedown, surely a first for the Garden State crew, but once again the ladies made the best of it, do-si do-ing with the cowboys.  Well, most of them did.  Jennifer declined to dance, saying that Turkish culture demanded that she respect her husband. She continued to be full of complaints as the evening went on, saying that the tequila tasted like rubbing alcohol, and dismissing the barbecue spread as “cliche.” It was clear that Margaret was at her wit’s end with Jennifer’s complaining, but, like Melissa, Teresa was far more tolerant.  She said that Jennifer was just trying to be “funny” with her constant one-upping and complaining.  Of course, anyone who remembers Teresa, before going “away” to “camp” humbled her, knows that she once loved to show off her extravagant, though illegal lifestyle, herself, so it made perfect sense that she would relate to Jennifer.

As the night wore on and the liquor flowed, Melissa popped outside to make a quick call to Joe, and after discovering that he’d taken his father and her mother out to dinner with the kids, was eager to report the news to Teresa.  Unfortunately, she also shared the joke about her mom hooking up with Teresa and Joe’s dad, and that Giacinto had said that he was going to get a hotel room.  As I’m sure you can imagine, Teresa was none too pleased! First off all, it’s just too soon.  Her mother just passed away about a year ago, and widower or not, Teresa likely has zero desire to see her dad with another woman.  Luckily, Teresa continued to keep her word not to argue with Melissa for the rest of the trip, but the look on her face said Melissa better watch her back.

In the end, the real tension was between Margaret and Jennifer. When the ladies returned to Margaret’s friend Polly’s house for the evening, Jennifer, who was more than a little tipsy at that point, was still making fun of Oklahoma and being dismissive of the beautiful accommodations Polly had provided, and Margaret simply wasn’t having it. After all, Polly is her dear friend, and she’d opened her home to Margaret’s friends and bent over backwards to try to show them a good time, and here was Jennifer making snide remarks.

Jennifer was laughing at the hoe-down, and saying the country music was a “snore,” when Margaret lost it. She told Jennifer that her comments were rude. And Jennifer’s response? “Cry me a river.”

The other ladies were stunned, but Jennifer wasn’t finished. Margaret told her that she had the worst manners, but Jennifer disagreed, saying she actually had the “best manners,” and when Margaret explained that it was “socially inappropriate” to be a guest in someone’s home, and knock all of their attempts to show you a good time, Jennifer asked what she was going to do about it!

Margaret went on to explain that it was all quite rude and obnoxious, Jackie piped up to agree with her, and even Polly wandered in to say that, yes, she had been offended by Jennifer’s comments throughout the weekend. And then something quite amazing happened. Jennifer actually apologized to Polly, and thanked her for a wonderful time. She said she hadn’t meant to insult her, and even volunteered to sleep in the trailer in the back, which she had been trying to avoid since they’d arrived! Yes, a housewife owning up to her BS. Will wonders never cease?!

Well, viewers, the fun’s just getting. The ladies of RHONJ are back next week, and things threaten to get ugly when Joe confronts Teresa about blaming Melissa for their family issues! What’s worse is that when Jackie tried to come to Melissa’s defense, saying Teresa can’t honestly think she controls what Joe does, she makes the mistake of uttering the “J word” when speaking of Joe Guidice! Stay tuned.