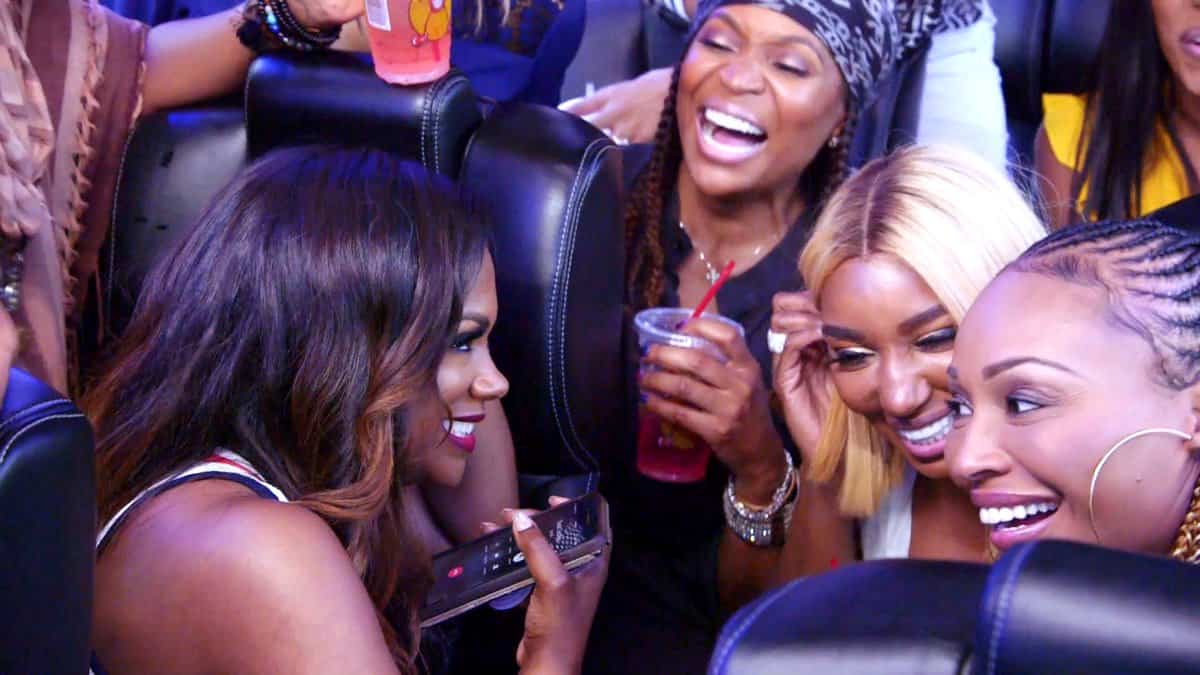 The ladies of The Real Housewives of Atlanta were back last night with plenty of shade, plenty of tea, and a new addition on the horizon.

Now, if you saw last week’s episode, you know that Porsha finally revealed her pregnancy, but only to her boyfriend Dennis.  It’s early days for the new bundle of joy, and the couple is still trying to keep it under wraps, but they’re clearly both thrilled.  They haven’t even told their families yet.  Porsha is pretty desperate to get on her future mother-in-law’s good side, and to the end, she showed up at Dennis’ hot dog shop (blonde weave, black catsuit and all) and got to work slinging hash.

Of course Dennis’ mother has her reservations about how quickly her son is moving with the new lady in his life, and like mothers everywhere suspected – she something was up, but Porsha didn’t let the cat out of the bag, she simply said that they were moving so quickly in their relationship because they were in love and happy.  Dennis’ mom still seemed suspicious, but mainly she was interested in Porsha’s willingness to sign a prenup should their relationship lead to a walk down the altar.  Porsha assured her that she would.

Newbie Shamari also had Porsha’s intentions on her mind.  While sitting around talking to her husband about her new friends, she said that she felt that Posha had shaded her during last week’s couple’s dinner–and she wasn’t wrong.  In case you missed it, Porsha arrived with Dennis, and went around the table giving kisses and saying hello to everyone except for Shamari and her husband, Ronnie.  And it’s not like she doesn’t know them.  She and Porsha both grew up in the same small town of Decatur, GA, and even went to high school together! Shamari was puzzled by the fact that Porsha had been standoffish, but not surprised.  After all, Porsha had shaded her at the Bailey-que a few weeks before too, but that had seemed like lighthearted fun.

It was not a good time for a girls trip, but after all the guys started bailing on the Gregg’s plan for a couples trip, the ladies decided to take off for Destin, Fla. on their own.  The trip got off to a good start, despite Porsha’s concerns that everyone would guess she was pregnant once they saw that she wasn’t drinking and was a little extra tired and moody.  Most of the other women have had at least one child, and she figured they’d realize what was going on pretty quickly, but mainly she was concerned about the stress. These trips are never actually relaxing, and usually lead to major problems, but this one got off to a good start, and on the bus ride down, everyone was getting along famously.

They played truth or dare to pass the time, which led to Eva sucking on Sharmari’s fingers, then turning around and having some pretty lackluster phone sex with her fiancé, Michael.  Kandi did much better with the dirty talk when she called Todd, but he was a bit taken aback when he realized their naughty conversation was on speaker for all the ladies to hear.

All in all, it was pretty wise for everyone to choose dare, but then Porsha decided to go the other way, and requested truth.  NeNe pounced immediately.  She asked Porsha if Dennis had dated any of the women on the bus, or any women that they knew.  Now, NeNe knew the answer to this–she was just thirsty for more tea.  Porsha said that Kandi knew a woman that he had dated.  NeNe asked if this woman had dated him recently, and Kandi explained that it was, in fact, quite recent.  She said that this friend of hers had dated Dennis for quite some time, and had been shocked to find out that he was dating another woman (Porsha) about a month and a half ago.

Porsha clearly felt put on the spot, and said they had been in a strict monogamous relationship, but Kandi had to call BS on that.  She said that Porsha had shown up to a party three months earlier with another man, who she had been kissing and cuddling with throughout the night.  Faced with this fact, Porsha backtracked on her statement from three minutes ago, and clarified that while she and Dennis had been dating for about 6 months, they hadn’t exactly been exclusive in the first couple of months.

With that mini drama put aside, the ladies arrived in Destin, checked out their fabulous digs, and lightheartedly argued over who would get which room, but as soon as they sat down for dinner, the shade began again.  Cynthia took up the mantle this time.  She turned to Eva and said, “speaking of girls trips, how was your bachelorette party?”  Cynthia had seen pics of Eva and some girlfriends partying it up in Miami, and was curious as to why none of them had been invited along–particularly NeNe, whom Eva has described as being the “older sister she never had” and whom she had invited to take part in her wedding ceremony.  Eva hemmed and hawed for a moment, and tried to blow the whole thing off by saying the trip had been a surprise, but then Porsha, apparently excited by the idea that this particular shade wasn’t being thrown at her or her relationship, spoke up and said that she had been invited on the trip months ago, and had also been curious about why Eva hadn’t invited NeNe.

Eva, who keeps proving herself to be a pretty bad liar, explained again that it had been a surprise, but once it became clear that no one was really buying that, she tried a different tact.  She talked about how NeNe had so much going on over the last several months, and that she was sure she had no time to be running around to strip clubs in Miami with a bunch of Eva’s girlfriends.  She asked NeNe if she understood, and NeNe said that she did–sort of.  She explained that no matter how much she had going on, and even though she would likely have declined, it would have been nice to have been invited.  Point taken.  And everyone seemed ready to let it go.  But Porsha couldn’t leave well enough alone.  She asked if everyone was “good” now. And, of course, someone was going to speak up and say no!

This time it was Shamari, who brought up the chilly reception she’d gotten from Porsha at the couples dinner, and wanted to know if she’d misread the situation.  Porsha assured her she had not.  She said she hadn’t been “feeling” her that day because she’d heard that Shamari was upset at her for poking fun at her outfit at Cynthia’s Bailey-cue.  Then she threw Eva under the bus (again), saying that her comments had been far worse, and that Eva was always low key shading people, and then acting shocked when she was called out for it, which she did again while sitting at the table, wearing a “who me” or rather a “who said that?” expression.

The ladies quickly moved on from the shade talk, although Marlo couldn’t resist taking a few jabs at Eva’s wardrobe choices since joining the show.  But all in all, the ladies ended the evening on a positive note.  However, scenes from next week’s episode show that the rest of the trip may not go so smoothly–stay tuned!