The Real Housewives of Atlanta Recap: Pass the Peach and Throw the Shade 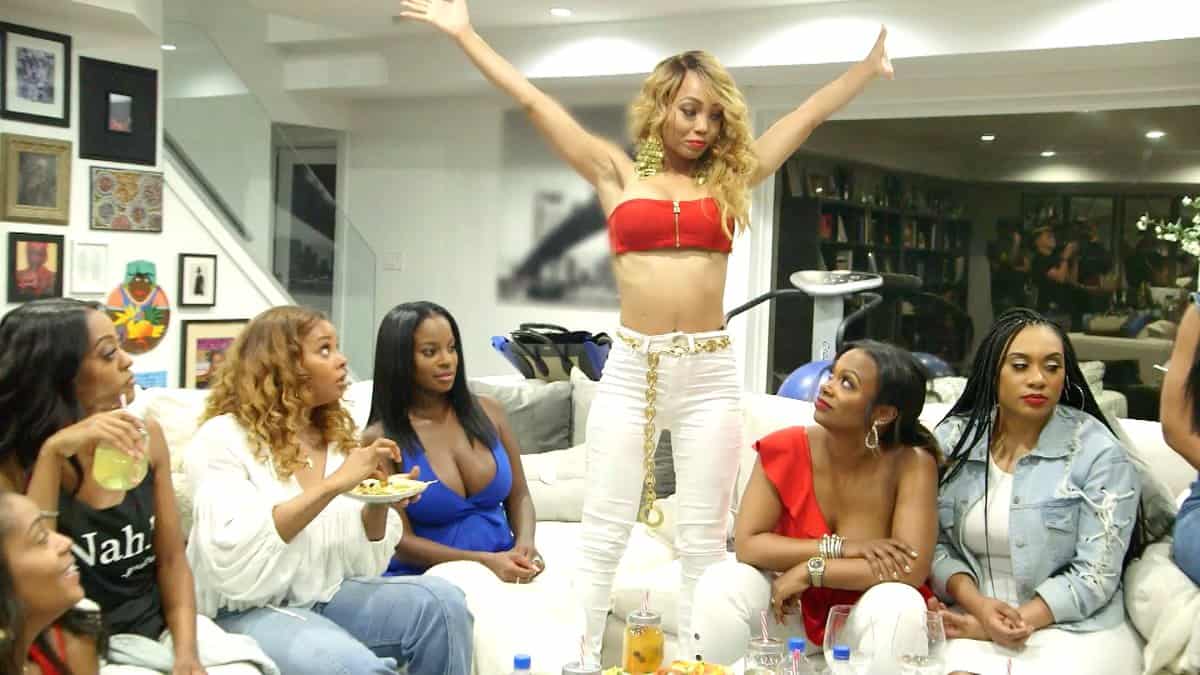 The ladies of The Real Housewives of Atlanta were back at it last night, and it seems that each of the women has some major changes on the way, but one thing that remains the same is that these are some shady peaches!

In a Bravo crossover moment, Kandi and her husband, Todd paid a visit to Married to Medicine‘s Dr. Jackie to discuss the possibility of having another child.  However, because of Kandi’s history with high risk pregnancies, they’re thinking of using a surrogate to carry the baby this time.  They have two embryos left from their IVF treatments, and not wanting to leave one behind, it looks as though they may soon have two bundles of joy in their future! The only question is, will they find one surrogate willing to carry two babies, or have two surrogates carrying their children at once? Either way, Dr. Jackie warned that two babies would cost upwards of $100K!

As we all know, Porsha’s preparing for a new addition as well.  But we haven’t quite gotten that far yet.  In fact, last night she was just introduced to her new boyfriend Dennis‘ mom Gina for the first time.  It went well, but Porsha was trying just a little too hard to impress her future mother-in-law.  Apparently, Mrs. McKinney had recently celebrated a birthday, and while it would have been appropriate to acknowledge the occasion with lovely card, or maybe even a low key gift like candle holders or a nice vase, Porsha went completely over the top, and gave the woman a Louis Vuitton wallet.  The extravagant gift was met with little enthusiasm, and quite a bit of suspicion from the older woman, and she immediately wanted to know if the couple had something to tell her.  Dennis admitted that he’d told Porsha he loved her on day one, and they both giggled like children as she gave them the side eye, and asked if they were planning on rushing to the altar.  Move over Mama Joyce! You have some competition!

Now speaking of awkward mother-in-law encounters, Shamari’s joined her to plan the upcoming first birthday party for the DeVoe twins.  As they discussed color schemes, the two women couldn’t help but reflect on how far they’d come in their relationship.  It seems they haven’t always been each other’s biggest fan, and in the beginning, Mrs. DeVoe didn’t quite trust Shamari, whom she feared was just after Ronnie’s New Edition loot.  Shamari understood her maternal concern, but wished her mother-in-law could see that she truly loved her son, and that she had plenty of money of her own, thank you very much!  The two woman laughed as they reminisced about their early years, but then Shamari dropped a bombshell on the older woman: she said that she and Ronnie hadn’t gotten along so well in the beginning either, and that he’d had a difficult time letting go of the groupies.  Okay, probably not something that his mother needed to know, but it was all water under the bridge–on to cake tasting. But Shamari wasn’t finished, as she revealed that they got through that time by having an open marriage, and that the arrangement had been her idea, born of her “bi-curiosity.” Good grief, talk about over sharing! Mrs. DeVoe looked positively shocked.

In the meantime, Eva and her fiancé, Michael were planning their wedding, and Eva announced that NeNe was going to be giving a speech during the ceremony because not only was she funny (if I were Michael, I’d check out that stand up act first), she had become like the ‘sister Eva never had’ in the short time they’d known each other.  Why does it feel like Eva and NeNe barely even know each other?! Oh well, this seemed to be news to Michael, but like most grooms, he wasn’t interested in getting mired down in details.

NeNe was thrilled when Eva asked her to be a part of the big day, but when she shared the news with the others, they didn’t quite share her excitement, especially Cynthia, who’s still sore because apparently Eva started a rumor that she paid her former beau, Will, to be her love interest last season.  Marlo pointed out that Eva wasn’t the only one saying it, and NeNe assured her that no one would believe such a thing, especially since if Cynthia was going to pay someone to date her, she’d have found someone a lot more interesting than Will.

Besides, Cynthia’s moved on with Mike Hill, and the two are going strong. They even have a sweet and corny little couple name they use to hashtag their Instagram pics — #CHill, for Cynthia and (Mike) Hill.  Couldn’t you just puke? But they really are cute, and they seem pretty smitten with each other.  Unfortunately, he lives in LA, so he had to miss Cynthia’s Fourth of July Bailey-cue.  It was a shame too because it had an absolutely groundbreaking theme: red, white and blue!

As it turned out, all of the ladies left their men at home for the occasion, and it turned out to be a ladies only affair, filled with food, shade, and fun.  We even met the newest cast member, Tanya, who is a little different than the housewives we’re used to.  She’s a tech geek, but she also loves labels, so she and Marlo got along famously, as they compared Valentino shoes and discussed their latest designer finds.

Each of the ladies was supposed to bring a plus-one to the Bailey-cue, but being extra as usual, Porsha decided to bring two: her sister, Lauren and Shamea, and as they made their way to Cynthia’s, Porsha just had to spill the beans about what Eva had to say about Shamea last week.  Eva’s still smarting from the shade Shamea threw at her last season, and made it known that she hadn’t forgotten for a moment.

As the ladies settled in, Cynthia suggested a game of Pass the Peach, which was basically truth or dare, without the dare.  The ladies had to ask questions about their friends, and pass the peach to the one who most resembled the question, and some of them weren’t pretty.  For example: when asked who was the biggest liar of all, Marlo did not hesitate to say that it used to be Porsha, but that now, the title went to Eva.  Eva was more than a little taken aback, and wanted to know why Marlo would possibly call her a liar.  Marlo said that after years of knowing Eva, she still wasn’t quite sure exactly who she really was.  Cynthia took the opportunity to set her straight on that Will issue, and informed her that Cynthia Bailey does not need to pay any man to be in a relationship with her.  You go, Cynthia!

We also found out which lady was the freakiest peach.  Everyone immediately said Kandi wore the crown, but she said not so fast because Porsha is freakier than any of them could possibly imagine!  It was mostly a day of light hearted fun, as the ladies seemed to be skipping the high level drama for next week. Stay tuned!