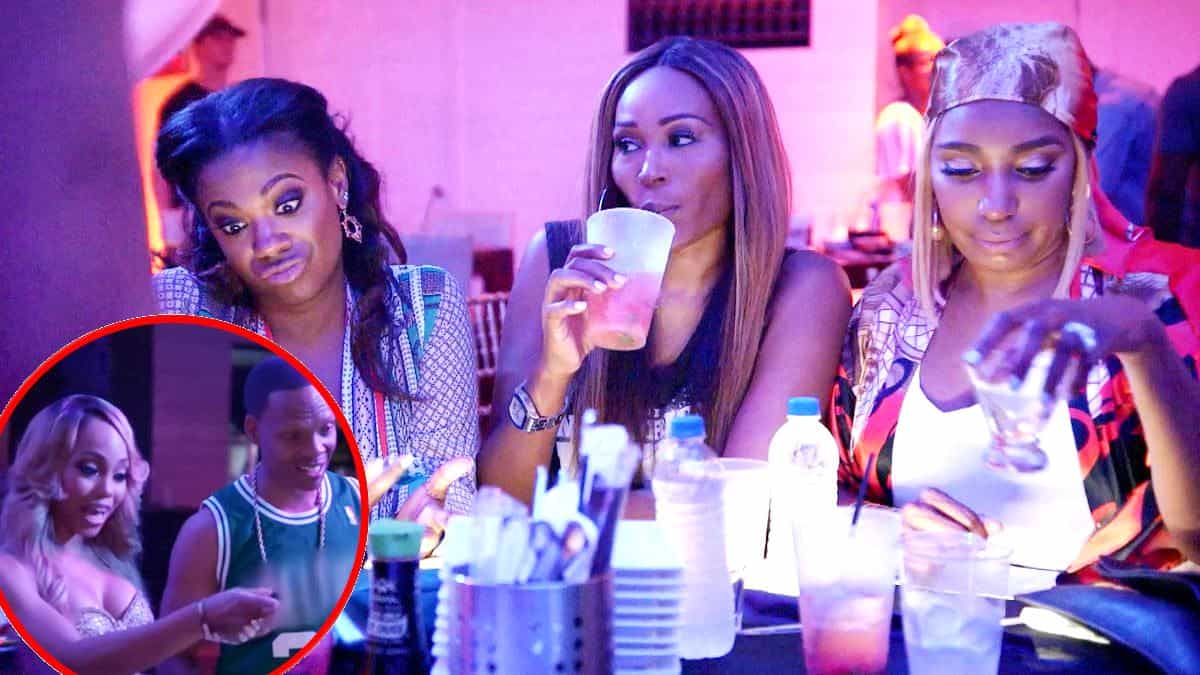 Well, smack it up, flip it, rub it down! The peaches of The Real Housewives of Atlanta returned last night, and we were introduced to their new addition, Shamari DeVoe, wife of legendary New Edition, Bel Biv Devoe, and Bobby, Ronnie, Ricky and Mike singer, Ronnie DeVoe.

Shamari is also a singer in her own right, as half of the 90’s duo, Blaque and a mother of absolutely scrumptious 11 month old twins.  She’s also good friends with Kandi, and a high school classmate of Porsha’s, so her presence is bound to make things much more interesting in the ATL!

Shamari and Ronnie have been together for 17 years, and have recently begun a joint musical endeavor with their group, “Me and Mari,”  which she is convinced will take off, and make them the “new Jay-Z and Beyonce.” That may be taking things a bit far, but you keep dreaming big, girl!

The ladies were introduced to Shamari at ATL Live, a monthly showcase of local talent, where Shamari was performing with her group, Blaque.  They sang their signature, and if memory serves, their only other hit single next to ‘808,’ – “Bring it All to Me,” and they sounded pretty good, although, Cynthia pointed out quite accurately that their hair, make up, and costumes were “a little dated.”

NeNe, who came out to let her hair down, after receiving  some great news about Gregg’s health–he’s cancer free!!!–wasn’t quite feeling the performance, either.  But she made a concerted effort to force a (very fake) smile and a how do you do when they were introduced.

When the show was over, Shamari introduced the ladies to Ronnie.  They were woefully unimpressed, particularly Kandi, who has known him for years.  It may have gone better, had he not taken Shamari up on her suggestion that he give Kandi some “pointers” for her performances.  He went on and on about “placement,”  whatever that means, and Kandi was not amused–especially since Bell Biv DeVoe recently opened for Xscape, and not the other way around.

Kandi seemed equally unimpressed with Porsha’s new man, Dennis, although it’s still not completely clear why.  When Porsha mentioned wanting to introduce him to the other ladies, Kandi kept quiet, but said during her interview that although she’s never met him, she knows plenty of people who know him, and based on the look on her face, the tea she’s not yet spilling is piping hot!

We got another glimpse of her true feelings about Porsha’s man, when Cynthia announced she was having a “family-que” and wanted everyone to bring their favorite dish.  Porsha stated that she didn’t cook anymore, as her new man was a “chef,” a description of his profession that Kandi found hilarious.  Sure, he owns a chain of hot dog shops, but, as Kandi pointed out, that hardly makes him a chef.  But she also said that “he’s quite the dog.” Stop teasing us, Kandi!!

Eva was throwing plenty of RANDOM shade last night too, .  She met with Porsha to workout, and when they discussed the trip to Miami, she said that she thought Marlo was “high maintenance,”  and that while she didn’t “vibe” with Cynthia when they first met last season, she’s glad they got the chance to hang out and have a good time on the trip because she really did “respect her veteran walk.” Hmmm–doesn’t sound much like respect, and that’s actually the second time she’s brought up the fact that Cynthia is a good bit older than her, but okay.

She also had plenty to say about Porsha’s friend Shamea — another one she got off on the wrong foot with.  Maybe it’s her, not them? Eva said she liked Kandi’s friends, referring to Shamari, and said that she should always invite them.  When NeNe mentioned that Shamea was Kandi’s friend, too, she said she liked the fact that Shamari was black and snatched, and that while Shamari was black too, she wasn’t “black with a q.” This led Kandi to believe that perhaps, she was talking trash on Shamea because she’s a darker skinned woman, which Kandi didn’t like one bit.  She immediately told her she was being “shady AF.”

In the end however, the shadiest moment of the night came when Kandi, her former assistant Carmon, and another mutual friend of Kandi and Porsha’s, Jami began talking about Porsha and her new man.  Now, you may not have known Jami by name before now, but to refresh your memory, she’s the girl that Porsha chased out of a party and fought in the street a few seasons back, after reaching a level of anger few women can muster while wearing thigh high boots and fur hot pants, but somehow Porsha managed.  According to Jami, Porsha’s boyfriend was dating another friend of hers for the last two and a half or three years, who was devastated to find out that he had started dating Porsha.

It was at this same time, that Porsha’s mother came by to visit Porsha, and commented on the additional weight her daughter was carrying.  Porsha said the extra “5 or 6 pounds” she was carrying (girl, please!)  was “love weight.”  She then went on to describe the wining and dining, and extravagant gifts Dennis was lavishing on her–the Rolex watch, which Kandi and her friends commented that he gave out to the girls he dated like most players would give out bouquets of hand picked daisies (apparently hot dog shops are a lot more lucrative than I even imagined!).

Porsha also mentioned the many home cooked meals he’d prepared for her, and that he’d promised that if he couldn’t do the cooking, a fresh food delivery service would make her meals, but according to Jami, those meals may be being prepared by another woman; and finally, the most brutal betrayal of all, the tattoo he got of Porsha’s name on his leg, and the one he promised to get of her face on his back—the gesture that made her believe he was the one, was yet another gesture he’d made many times before.  Apparently the man’s body is just walking, living, breathing scroll of all the girls he’s loved before, and Porsha’s just happened to be the latest one.

But here’s the thing, we all now know that Porsha is pregnant with this man’s child, and engaged to be married.  So were Kandi and her friends lying and throwing shade just to see if it stuck, or is Porsha headed for heartache once more? We’ll soon find out, viewers.  Stay tuned!

TELL US – THOUGHTS ON THE LATEST RHOA EPISODE? ARE YOU LIKING THE ADDITION OF SHAMARI? OR IS SHE TEAM ‘TOO MUCH’?!