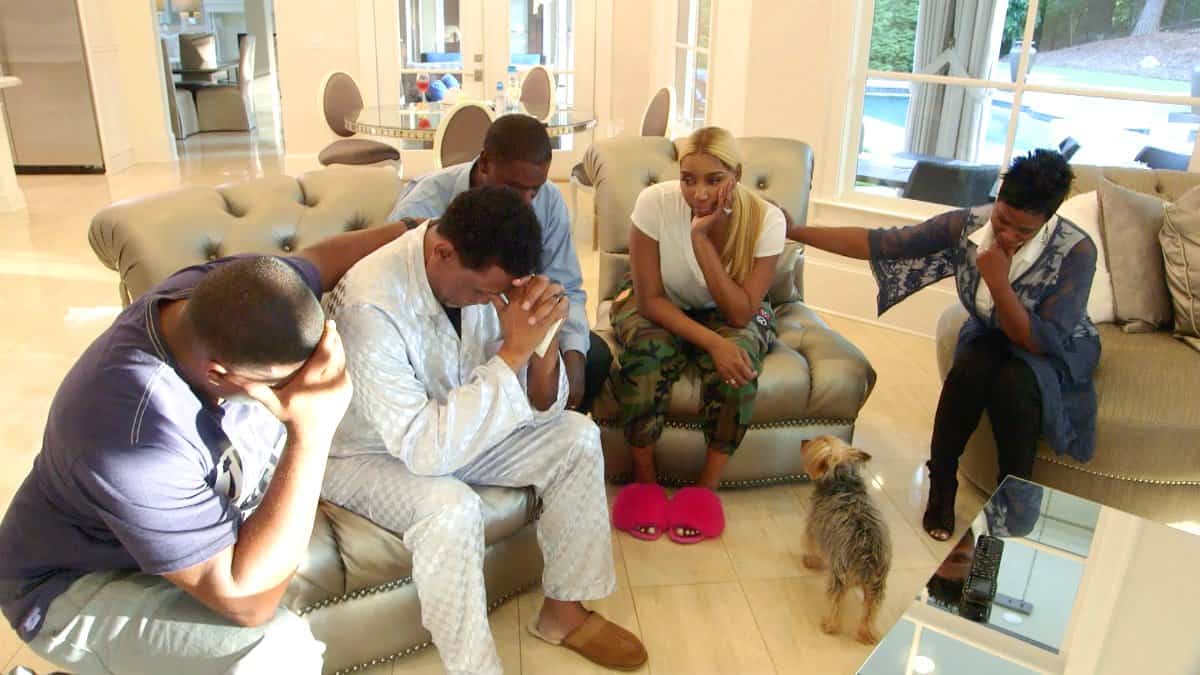 Well, viewers, the wait is finally over! The peaches are back for the 11th season of The Real Housewives of Atlanta–well, most of them anyway, and it’s looking like the ladies are gearing up for plenty of changes and a whole lot of drama!

When we picked up with the ladies last night, everyone was mainly concentrating on family, our Queen Bee NeNe most of all.  Her husband, Gregg Leakes was recently diagnosed with stage 3 colon cancer, and had to endure a surgery to remove part of the organ.  It’s left him feeling scared, but thankful for the love and support he’s gotten from his wife.  As for NeNe, she’s trying to stay strong for her family, as she always does, but she admitted that she often breaks down when she gets a moment alone.

Knowing how difficult it is to be the caretaker all the time, Porsha decided to step in and plan something that would be all about NeNe – she decided to get all the ladies together for a trip to Miami to support NeNe in her first stand up performance since Gregg’s diagnosis.  Sounded like a sweet and uncharacteristically selfless idea, right? But it is Porsha, so it wasn’t going to be all about NeNe.  As luck would have it, NeNe’s show happened to coincide with Porsha’s birthday weekend, and, if she gets her way, this will be the weekend she gets engaged.

You see, Porsha has a new man, and she’s pretty anxious to show him off to the ladies, and more than a little anxious for him to put a ring on it. It’s pretty much all she can talk about, and she even wore white throughout most of the episode, in case he missed her many hints about feeling “bridal.” The good news is her man, Dennis McKinley seems equally smitten with her.  She recalled being introduced to him by a mutual friend, and said that he said he loved her on that very first day, and the two have been inseparable ever since.  He also happens to be very rich, according to Porsha, who described him as the “boss” of Atlanta.  He owns several business, including the world famous “The Original Hot Dog Factory,” which will allow him to put a very big ring on it when the time comes.

And the time may be coming soon.  The couple shopped for engagement rings last night–at the very same jeweler where Porsha’s ex husband, Kordell, bought her first engagement ring–but she was far too giddy to worry about trivial matters like that.  Once the shopping excursion ended, it was time to concentrate on planning the trip.

First Porsha called Cynthia,  who was, of course, on board right away. The challenging part was reaching out to Kandi.  Porsha and Kandi still basically have no relationship whatsoever, which was made painfully clear by the lackluster response Porsha got when Kandi answered the phone.  It was that unenthusiastic and somewhat suspicious voice reserved for when the caller id shows “unknown number” and the person on the other end asks for you by your first and last name, and you just know they’re trying to sell you something.  But Porsha managed to break the ice with a joke.  She told Kandi that Cynthia wasn’t going to be able to make it, and that so far, it was just going to be just the two of them on the trip.  After Kandi hemmed and hawed for a few moments, Porsha laughed and told her that, of course, Cynthia was coming, and Kandi appeared to enjoy the moment of levity, as well, and said she’d be happy to join the others on the trip.

Of course, Kandi was in very good spirits for her own reasons.  She and her group, Xscape, were being honored by ASCAP (American Society of Composers, Authors and Publishers) with one of their most prestigious awards, The Golden Note.  She brought her whole family along for the trip ahead of the awards ceremony, and you wouldn’t believe how much her children have grown! Baby Ace isn’t much of a baby anymore, and is turning into a “little boy” right before our eyes, and her daughter, Riley, has blossomed into a full grown woman over the last year!  She’s lost over 50 pounds, and is positively gorgeous.  Kandi and Todd have plenty to be proud of, although Riley told them in no uncertain terms over dinner that they were far too busy working to even consider having another child.

Of course, if she gets baby fever, Kandi can always pay a visit to Eva and play with little Michael Jr.  He’s an absolute doll!  Eva and her husband, Michael seem very happy together, and during a family photo shoot we got to see them spending time with their new son and Eva’s daughter, Marley.  But the new mom still had time to throw shade. As she posed and whipped her hair around in the wind machine, she was asked about the difference between her modeling style and Cynthia, to which she responded, “about 20 years.” Ouch!

But I don’t think Cynthia will mind. She’s wearing her 20 extra years beautifully and she’s far too taken with her new man, Mike Hill to care what anyone has to say about anything.  The two have been dating for several months, and Cynthia confirmed that he’s “taken a swim in the cool waters of Lake Bailey”….several times, which is Cynthia way of saying they have done it!  He’s even met Cynthia’s daughter Noel, although it was an unexpected and somewhat awkward encounter that took place during one of his many “visits.” But hey, Noel is a grown woman now, and Michael lives in LA where he works as a sportscaster, so they have to get it when they can!

As the ladies set off on their trip, Porsha was thrilled to be traveling with her man on a private jet, and wiggled her ample booty and long red weave in anticipation of a fabulous weekend–until things hit a small snag in the limo.  Porsha asked Dennis is he knew Kandi, and he said he did, but became quite cagey and refused to elaborate further when she asked him exactly how he knew her.  But things were soon back on track when he hinted that they may be getting engaged “tonight,” and she discovered that he’d gotten them a huge suite at the home and hired a private chef.  She really lost it when he presented her with a jewelry box–but the show faded to black from there, so we’ll have to wait until next week to see what’s inside. It looks like we may also find what Kandi already knows about Dennis—she says she’s got tea.  I love tea, don’t you?? Stay tuned, viewers, we’ve only just begun!

TELL US – THOUGHTS ON THE RHOA NEW SEASON PREMIERE?