The Real Housewives of New Jersey Recap: Brunch Can Be Brutal 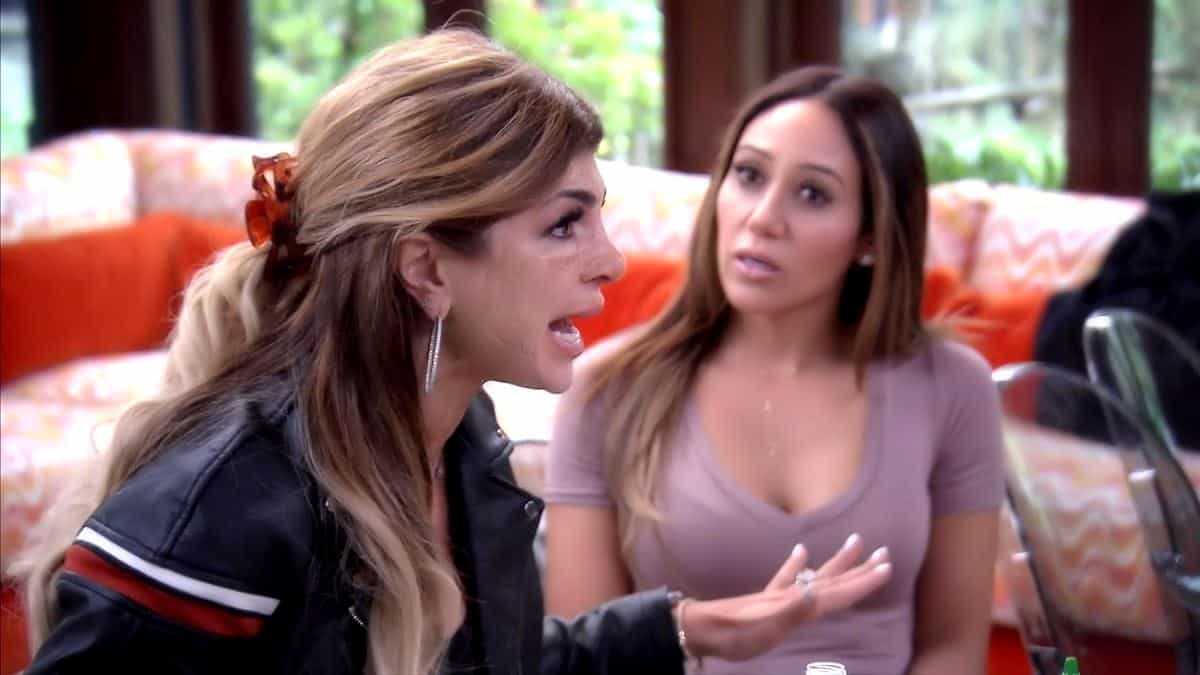 Well, you’ll never guess what happened on last night’s episode of The Real Housewives of New Jersey – Teresa and Melissa fought.  But this time, it wasn’t the main event–in fact, it barely made the highlight reel.  There’s quite a bit to unpack, so let’s get started shall we?

When we picked up with the ladies, Margaret was having a brunch for the ladies at her home, you know, because Jennifer‘s party went so well last week! Teresa was pretty standoffish with Jackie from the moment they saw each other, and it was clear that she was still seething from her comments about Joe Guidice at Jennifer’s.  She mainly just ignored her as she, Melissa, and Margaret filled them in on the shenanigans at Danielle’s bachelorette party.  Jennifer and Jackie didn’t attend because they barely know Danielle, and, of course, she and Dolores are mortal enemies–an interesting dynamic considering both are loyal soldiers in Teresa’s army.

Dolores apparently had time for the petty that day because she began going at Danielle the moment she arrived.  When Jennifer was saying how awkward it must have been to be so close to the male strippers, Dolores whispered that it ‘wasn’t the first time’ or the ‘500th’ time that Danielle had been so close to the package of a man she barely knew. And when Danielle was reading the ingredients on the facial masks they were going to be wearing, she lamented the fact that she was “so allergic to everything,”  Dolores said “not to penis!” But she wasn’t done yet as when Danielle mentioned that her fiancé hadn’t come over that night because he didn’t want to see her after she’d been around a bunch of strippers, Dolores suggested that he could have “put a black light over her!” Pretty rough stuff, right?! And all delivered with a smile, but she didn’t save it all for Danielle.

When Melissa mentioned that she hadn’t had strippers at her bachelorette party because she was afraid that Joe wouldn’t end up marrying her if she had, Dolores called her “Little Miss Perfect,” and said that she came off as fake when she talked about being afraid of what Joe would say or do, because she obviously wasn’t.

This, of course, reignited the whole debate from recent weeks between Melissa and Teresa about Joe spending time with their father, but before they could get the battle going in earnest, Jackie jumped in to defend Melissa again–saying she felt quite close to her already–but Teresa, still sore from last week, saw red, and pointed out that Jackie had known Melissa for “two minutes,” and knew not from whence she spoke. And when Jackie said she was “way too old” to be getting yelled at, and asked Teresa who she thought she was, Teresa told her–in no uncertain terms.

Teresa let Jackie know that she was not the one, and reminded her again that she’d been around for “five minutes,” and advised her that if she “wanted to make it to ten,” she needed to “shut it.” Teresa explained that you “don’t get in between family” and you most certainly did not talk about her husband, which let Jackie know that last week’s kerfuffle was coming back to bite her.

At that point, Danielle figured she’d better pipe up, and come to Teresa’s defense, as well.  She basically said ‘yeah, what she said.’ But Jackie shut her down too, and pointed out that she wasn’t even there, and that she needed to stay out of it, but Danielle assured her that Teresa had told her everything that had happened, but Jackie said that she stood by her statement about Joe regardless of what anyone thought. I like this girl! And look, she wasn’t wrong but I think we all know that look Teresa gets when someone gets out of pocket with her.  She sits there, mouth agape, blinking in wonder at the sheer audacity of someone standing up to her.  It was the look she wore just before the epic table flip–and usually it means one thing–RUN!

But Teresa has grown since then, and she managed to compose herself.  She told Jackie once again to stay out of her family’s business. Then she turned to Melissa and said that she shouldn’t be allowing Jackie to speak to her that way.  Forget about who Teresa thinks she is–who does she think Melissa is?! The girls weighs all of 90 pounds in soaking wet winter clothes, but Teressa somehow expects her to control everything everyone does!

But Melissa was emboldened by Jackie’s support, and rightly perturbed by the obvious double standard at play.  Apparently, it was fine for Dolores to co-sign everything Teresa said, but Jackie needed to stay out of it?! She had a point.  But then Teresa pointed out that Dolores was practically family herself, as she’d grown up with the Gorgas and Guidices and had known even Melissa for nearly 20 years.  This was also a good point.

But Jackie wasn’t finished.  She said that she and Melissa had gotten close very quickly, and that she wasn’t sorry for it.  Again with the not sorry. Just say you’re sorry, girl–it’s safer! Teresa had clearly had it at that point, and she got up and walked away with Dolores at her heel, as loyal as a Rottweiler.

Danielle wasn’t done yet, either.  She tried again to explain that Teresa’s relationship with Melissa, as well as her husband’s whereabouts were very sensitive subjects, and that Jackie should have stayed out of the former and never, ever should have even mentioned the latter.  She went on to say that she and Teresa had a “rough start” and that they had gone through a lot to get to the place where they were today.  Jackie said that was interesting, but irrelevant information, leading Danielle to call her arrogant. After denying she was any such thing, Melissa defended her friend, saying that Jackie was feeling “attacked” and that Danielle should lay off.

Danielle wanted to know why they were working so hard to defend each other all of a sudden–were they lesbians now, she asked? They barely ignored the sophomoric remark, but continued to argue about the over all issue, as Teresa and Dolores washed off their masks and continued talking about Jackie and Melissa in the next room before emerging a few moments later, and walking out of the brunch for good.  Teresa hugged Danielle, and both women hugged Margaret and thanked her for the hospitality, but neither so much as waved in the general direction of the other ladies.

The following day, Jackie reached out to Dolores for advice on how to handle Teresa, and suggests they get together for lunch and talk while Teresa, Melissa, Margaret and the Joes were away in Bimini for Danielle’s wedding.  Jackie wasn’t actually all that concerned with Teresa’s feelings, but knowing that she and Melissa are sisters-in-law, and would likely make up sooner rather than later, she didn’t want their rift coming between her blossoming friendship with Melissa.

Meanwhile in Bimini, everyone was wondering how the groom-to-be, Marty was going to handle Danielle.  The woman is a full time job on a good day, but she was in rare form, even for Danielle standards, as she ordered her guests around, and made demands.  She talked so much she managed to bite a hole clean through her own tongue!  Margaret’s husband, Joe, held a cold compress on it, while Marty and Margaret looked on, relieved for the few moments of silence her blood filled mouth afforded them.

Later, at dinner, Marty explained that only two of his three children would be attending the wedding, and Danielle loudly, and with no shame, announced that his children, even the ones who made the trip to Bimini, didn’t like her (now, who could dislike Danielle?). Marty offered up a half hearted denial of his children’s feelings for their step-mother to be, while Margaret tried to comfort her by saying that things could change down the line. She explained that Joe’s daughters hadn’t always cared for her, but that their relationship had improved with time.

But Danielle wasn’t really trying to hear that, and besides, she was on a roll. Danielle said that she demanded respect, and if they couldn’t give her that, they didn’t need to be around her. She said that it was hard for her, but Marty finally spoke up, saying that actually it was hard for him, and that he’d chosen her to the detriment of his relationship with his kids. While Danielle acknowledged that this was true, she also said that she didn’t cause the rift, and that he raised “that.” It was taking an ugly and rather awkward turn, but before things could get too out of hand, Danielle broke the tension by asking if he still intended to marry her, and he responded that it ‘depended on how the rest of the conversation went,’ eliciting the loudest, fakest laugh you’ve ever heard from the rest of the table.

At that point, Teresa changed the subject altogether, and mentioned that Dolores had called, and had extended her congratulations to the couple. Joe said “she has a big mouth, that Dolores,” and Melissa was soon off and running about Dolores butting into their family issues, and Teresa defending her, launching them right back to the day before, but before a full blown argument could get underway, Joe Gorga decided he’d had enough.

He told them both to zip it and come talk in private, which they did, on the same side for once, as they followed Joe to a quiet corner like two chastened school girls. He told them they’d come too far to go back to arguing, and said they were family and loved each other more than they realized. They talked again about their dad, and Teresa said she didn’t want him missing time with him like she did with their mom while she was “away,” and didn’t want him to suffer the same regrets. Melissa said that no one else mattered as long as their family was strong. They agreed not to argue anymore (yeah right!).

The dinner actually ended on a high not…but the rest of the wedding weekend may not…stay tuned, viewers, the second part of the season promises to be one of the most dramatic yet! You can watch the dramatic mid-season trailer here.