The Real Housewives of Atlanta Recap: Is NeNe Jealous of Tanya? 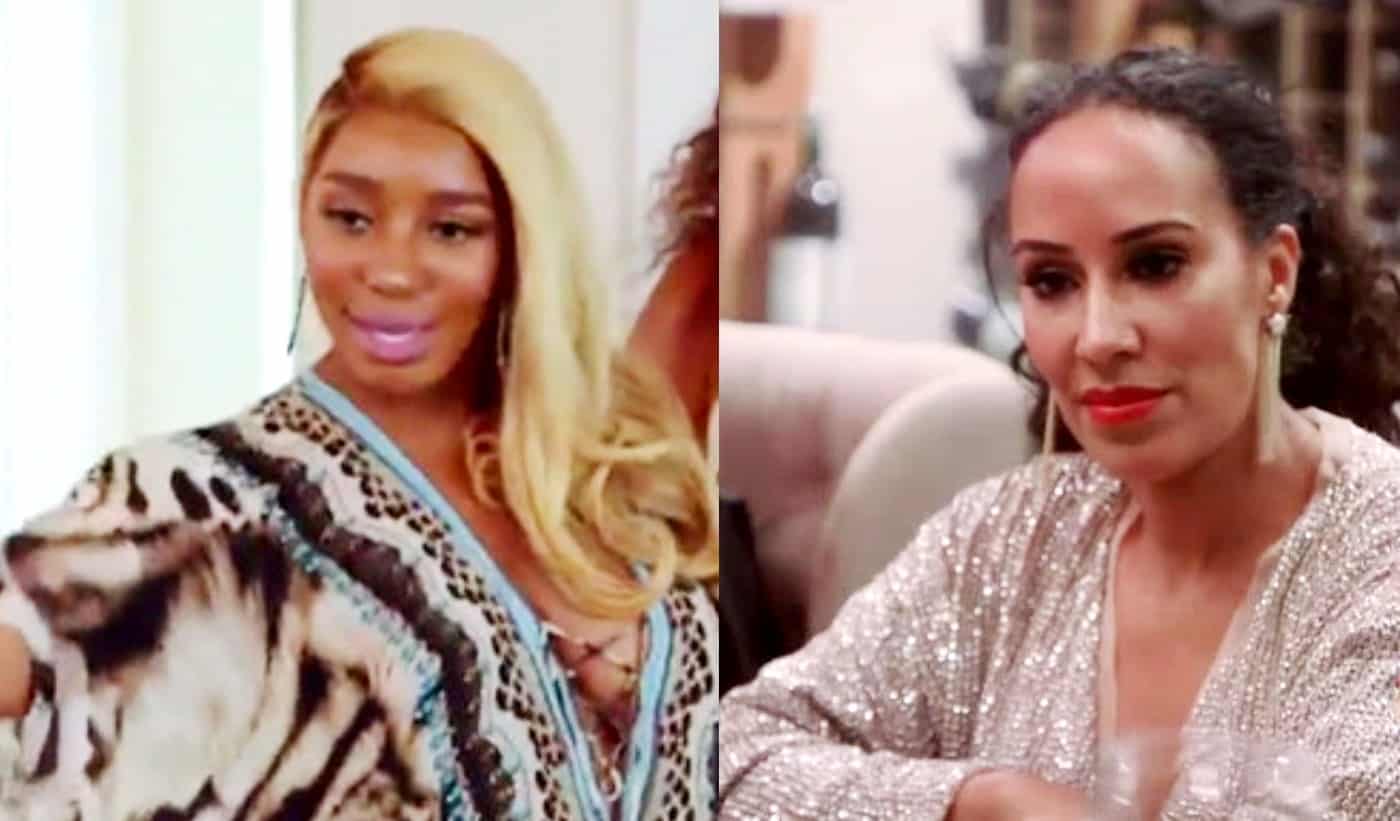 The ladies of The Real Housewives of Atlanta continued their trip to Destin, Florida during last night’s episode, and as usual, the trip didn’t exactly run smoothly.

When we picked up with the ladies, the sun was just rising on their second day in the beautiful beach town, and rain was in the forecast, ruining their plans for beach fun.  But they had other things on their minds. Porsha was working overtime to stop the other ladies from figuring out that she was pregnant, and she figured not drinking would be a dead give away, so she decided to fill her Hennessey bottle with apple juice.  It wasn’t really a perfect match, so she decided to go with a back story to explain her dry weekend, and told the others that she was on a cleanse as part of the Keto diet, and couldn’t drink.

In the meantime, Marlo was determined to give Shamari a makeover–whether she wanted it or not.  Shamari tried desperately to politely decline, but Marlo just wouldn’t take no, and Shamari finally consented to the makeover just to get her to shut up and go away.

With no chance of outdoor activities, NeNe decided it was the perfect time to play a new game she’d invented called “B*tch Stole My Talent.” Here’s how it worked: The two members of the group that had the same talent would compete against one another to see who was the best at it.  Marlo and newbie, Tanya, are the fashionistas of the group, and would compete to see who put together the best look; Cynthia and Eva would battle it out over who gave the fiercest smize on the catwalk, and the two musicians in the group, Shamari and Kandi were warming up their vocals to belt out those high notes. That left NeNe and Porsha to be co-hostesses of the competition, but that didn’t leave them free of scrutiny because later the women would vote for the one who had done the best job.

Marlo kicked off the competition in a skin tight designer romper-style outfit that looked like something you would have seen in a 90s music video they only aired after midnight.  But Tanya slayed in a white jumpsuit, which she removed to reveal a tasteful back and white striped maillot cut bathing suit.  She topped the look off with a pair of $150 sunglasses from NeNe’s store, Swag, which she said was the low end of her “high/low” look of the day. She spoke at length about the well-known designers behind each and every other piece of her ensemble.  It was a bit annoying, and it was clear she was getting under NeNe’s skin, but the look was flawless, and she won by a landslide.

Next up was Eva the Diva, who admirably strutted her stuff down the imaginary runway, but Cynthia’s iconic fierceness and legendary cheekbones won hands down.  As for the singing competition, Shamari killed with “His Eye is on the Sparrow” and Kandi? Well, she has a nice voice too, but she’s more of a songwriter than a singer, and Shamari took the crown.

And when it came to the hostess with the most-es, the title went to Queen Bee NeNe, of course.  She wouldn’t have it any other way.

Later on, the ladies delved into more zen pursuits.  Kandi, Shamari and Eva went to an aerial pilates class, while Cynthia, NeNe, Marlo, and Tanya had massages. NeNe discussed not quite being over the fact that Eva hadn’t invited her to her bachelorette bash in Miami.  She said that she forgave the slight, but would never really forget Eva’s shade.  In the meantime, Shamari filled Eva and Kandi in on the morning makeover Marlo had forced on her.  As she continued to think about it, Shamari got angrier and angrier about Marlo’s petty comments and overbearing attitude.  The other ladies agreed it was a bit too much, but they also felt that Shamari was partly to blame for backing down and ultimately agreeing to it. They probably also agreed that they would rather be getting massages with the others, as aerial pilates required the use of a contraption that Kandi dubbed “The Donald Trump,” because it “grabbed them by the p***y.”

As the others luxuriated in the massages, and nearly fell asleep, it suddenly dawned on them that Porsha had a secret. She’d begged off of the day’s activities, saying she had a headache and needed to lie down , they all agreed that she was looking a little thicker around the middle, and no one was buying that story about the cleanse.  When NeNe went to her room to check on her later, and found her sitting up in bed, happily enjoying a smorgasbord of snacks, she decided to ask her directly.  Porsha hemmed and hawed, but ultimately couldn’t completely lie to NeNe’s face, although she did fib a little and say she didn’t know for sure if she was pregnant.  All the same, they squealed and hugged and danced around in genuine glee at the very thought of Porsha becoming a mother.  It was a rare genuine moment, and it was lovely.

Then they went to dinner and all that genuine lovely stuff went right out the window.  Luckily they got a private room at the restaurant because things were about to get very loud.

Shamari announced to the table that she would be getting her fashion tips from Tanya from now on, and used it as a segue way to resurrect her issue with Marlo.  Marlo replied that anyone at the table could dress Shamari better than she dressed herself, and Shamri said “B***h…” before catching herself, and quickly apologizing for using the word.  She said it had been wrong, and Marlo said “yeah, just like your fashion choices.”

Shamari said she’s had enough of Marlo’s “smart, little comments,”  but Marlo said she was in America, and would say whatever she pleased.  She added that Shamari shouldn’t have called her out of her name.  Shamari acknowledged again that she had been wrong, and said that Marlo wasn’t a b***h. But Marlo wasn’t ready to make nice yet because she responded, “No, but you are,” so, of course, Shamari had no choice but to respond with, “Whatever b***h,”  and added, “There, I said it again.” Marlo told her to “say it one more time.” See what I meant about the private room? No one wanted to listen to this nonsense.  These women are almost 50 years old for crying out loud!

Shamari said “b***h” one more time, as instructed, and Marlo said “your mama’s a b***h.” But then things got pretty calm pretty quickly, and Marlo attempted to explain her position.  She said that “throughout her 42 years on Earth” (Girl, please!) everyone has always known her for fashion (is that what they’re calling it these days, Marlo? Cause last I heard you were known for something else.). Shamari said that may be true, but that Tanya had won the fashion prize. Marlo then said that Shamari had only won her portion of the competition because she had chosen to sing a religious song, and that her voice is “awful.” Shamari said “let’s see you do what I do.” To which Marlo replied, “let’s see you do this,” gesturing toward yet another hideous outfit that was about four sizes too small.  Shamari said that she’d sold 5 million albums, but Marlo said that was then and this is now, and asked what she had done lately.  Shamari then asked who had “discovered” Marlo, and said she had “new money.”  Marlo responded by suggesting that Shamari get braces, and Shamari accused Marlo of having fake boobs.  It was exhausting. Did I mention that they’re like 50?!

NeNe finally told them all to stop it, and said that if someone was fine with the way they looked, then everyone else needed to leave them alone.  Again–they’re 50! Then Tanya spoke up, and apropos of absolutely nothing announced that she felt she’d been labeled from the very beginning as Fashion Label Girl, but she said that just wasn’t true.  She explained that although she liked labels, she didn’t believe that they made an outfit, and that, in fact, you could do a lot with very little.  This rubbed NeNe the wrong way, and she said that she had very little tolerance for “ignorance.” Tanya was more than a little taken aback by NeNe’s harsh words, so NeNe took it one step further, and said that just because Tanya “thinks she’s fashion” doesn’t mean that she “was fashion” in her eyes.  She added that Tanya didn’t have anything she didn’t have, and was always trying to make it a competition.

Tanya pointed out, quite accurately, that it had in fact been NeNe’s idea to turn it into a literal competition, but NeNe said it wasn’t a competition every day, and closed the conversation by saying that she had fashions, and stores, and was a serial entrepreneur and a successful black woman.  Sheesh..she was really attached to those sunglasses! Seems like NeNe doesn’t like anyone getting more shine than her! Jealous much?!

Finally, Marlo piped up to say that she was never going to talk to anyone about fashion again.  Let’s all pause while the world takes a collective sigh of relief, shall we? But then Porsha must have felt left out because she broke in to say that it was interesting that Shamari was so sensitive about comments about her fashion sense when she had called her man Dennis a leprechaun when he’d worn that green suit to the couple’s dinner a few weeks back. She said it was especially rich considering the state or lack of Shamari’s husband, Ronnie’s eyebrows.  But it was light-hearted, and everyone laughed, as they toasted to the fact that they’d almost gotten through a vacation without any drama.

Well, the ladies will be off next week, but they’re back in Atlanta for the new year, so stay tuned!