Vanderpump Rules Recap: James Gets Emotional After Lisa Fires Him Over Katie Ultimatum 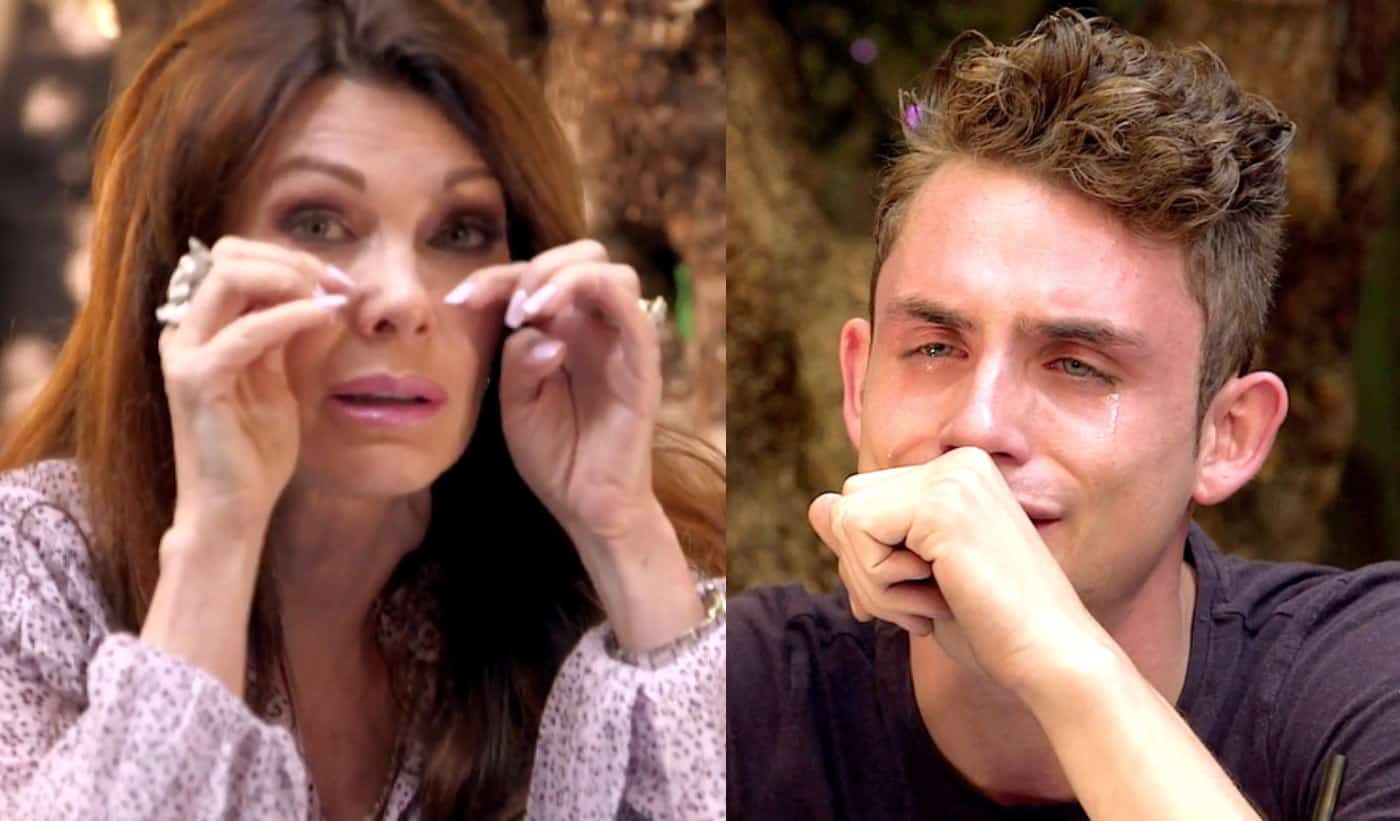 Sometimes ultimatums can bite you in the butt. Sometimes they cause people to take a stand. On this episode of Vanderpump Rules, Lisa is forced to make a decision that isn’t going to leave everyone happy….

To get you up to speed, last episode Katie gave LVP an ultimatum– either fire James or Katie quits. To say that Katie is bold is the understatement of the century, but LVP’s loyalty should def go with Katie. I mean, James hasn’t done anything but cause headaches for Lisa. Still, she is torn. “Tuesday has been very successful and there are a lot of people who work here and live on a daily basis on what happens here.” Lisa seeks out Natalie, her business partner, and the ladies discuss James’s body shaming. Natalie feels as though James is a good DJ, but Lisa is unsure what to do. “It’s a tough decision.”

Ariana and Scheana joins Billie Lee for her final transition surgery. Scheana opens up her home to Billie Lee post surgery since she is moving nearby. Somehow, Scheana gets on the topic of James and explains that James is helping her move out of her apartment, but don’t worry- he’s gonna know that she doesn’t condone his behavior. Billie Lee is just like, I’m about to go have surgery, so please stop talking, and Ariana is all like, this is just like Scheana: “She has to take drastic measures” to prove her loyalty to various groups of friends.

Jax and Brittany are working on their “beer cheese” recipe because, in case you forgot, the couple are going into business together…a beer cheese business, because there is DEF a need for that in stores. SIKE. Jax explains that he is “gonna be more of the business side of” the company, but doesn’t even know that he needs permits for selling food at a farmer’s market. Brittany explains that Jax has “one job” in this whole business, but she’s prepared to finish all of his undone work.

TomTom is almostttttt done, but there are just a few hiccups that they all need to get through. Sandoval and Schwartzie saunter in and ask LVP how they can help, but you can tell that they weren’t really planning on actually doing any work. They just asked to be nice, but when Lisa tells them to organize the uniforms and get her tea, they look shocked. Hilar.

Scheana is moving out, ya’ll! She is hoping for a fresh start once she gets into her new place over in Marina Del Ray. Naturally, James is her moving man and Scheana just stands around pointing at things James needs to take down to the car. Once Scheana had enough of her phone, she starts to have a convo with James about how they “are surface level party friends,” despite the fact that he just helped her move. Notice that Scheana waited until everything was moved out before she had this conversation. Scheana essentially breaks up with James and tries to show him what a d-bag he has been, but it goes over like a lead balloon.

Jax and Brittany decide to host a dinner party…but mainly they just wanted to debut their beer cheese. Everyone loves it hard, so it seems like this business is gonna be a hot hit. Speaking of business, TomTom comes up. The buddies talk about the TomTom interview process, and they worry that sweet Schwartzie will hire anyone, including James. Katie shares with the group that she gave LVP an ultimatum like a boss. The shock on everyone’s face is incredible.

Ariana comes over to Stassi’s apartment and the girls geek out over video games. Then they start planning their joint birthday party, like grown women do. NOT. This new-found-friendship is kinda weird, considering that Stassi and Ariana didn’t always like each other. Because the girls are now “cool,” they have decided to come together and celebrate their big day.

Later, James is out to dinner with his family and Raquel. James claims “he’s got a good head on his shoulders to go to SUR tonight” and that he is 4 days sober. James tries to be brother of the year and talks to his newly graduated bro about his post-college plans. James gifts his brother with $5,000 and this reminds Raquel why she loves him oh so very much. James acts like a sugar daddy at dinner- paying for the meal and showering his bro with gifts. Too bad he is a total troll when it comes to everything else…

“DJing See You Next Tuesday sober is just like watching Harry Potter in the theaters….and then reading the book version.” Wow. What a comparison. DEEP. Add LaLa to the list of people not excited for SYNT. LaLa is underwhelmed, especially after her recent adventure. “Rand produced a film called ‘Gotti’ so we went to New York for the premiere…” Ah, to live the life of LaLa. LaLa sits down to chat with Lisa, because ya know, she doesn’t really work, and shares that she has given up alcohol. She further states that after seeing James’s behavior as a sober person, she is beyond over his ways. This prompts LVP to make her rounds. She checks in with Sandoval to make sure James is still sober and then she visits with Guillermo, her partner. “Normally I see the path ahead very clearly, but I have no idea what I’m going to do” when it comes to James and this whole ultimatum deal.

LaLa snags a break (again, because she doesn’t actually work) and asks Raquel to come talk to her outside. “I know people are coming at you from all angles telling you that your man creeps around,” yet Raquel is still not believing the truth. LaLa explains that Raquel is “trudging in deep water”/she is stupid and when Raquel brings up that LaLa was bonding with Logan, James’s BFF, LaLa explodes and states, “we were bonding because my dad died you f*cking t*at.” Obviously, Raquel runs right to James and James packs up his whole DJing gear and leaves SUR like a great employee would do. Naturally.

The next morning, Raquel and James discuss the previous night’s debacle. Raquel is annoyed that LaLa called her stupid and we find out that Raquel takes it extra personally because she had a hard time learning growing up. James believes that LaLa is bullying Raquel and becomes emotional. Raquel makes it clear that she knows that James is “not all bad,” but I’m not sure LVP feels the same way. James is on his way to a meeting with Lisa, and you can tell homeboy is SHOOK.

It’s time for the TomTom interviews to ensue. Lisa is looking for people with “panache” who are “gregarious.” The people coming in look like soap opera actors and actresses and the boys are taking it all very, very seriously. Schwartzie is the absolute worst because he wants to hire everyone and then there’s Sandoval. The resume police. He side-eyes the potential employees and, in the words of LVP, is acting like he is “vetting for the supreme court justices.” In walks Teddi’s brother- Teddi, as in Teddi Mellencamp of the RHOBH. LVP hires him on the spot as a bar back, not surprising. After that warm and fuzzy moment, James saunters in. LVP asks him to meet her at a different table so they can talk. The tension is thick………

“I’m just so upset with you. I can’t even begin to tell you how upset I am with you,” begins Lisa. James asks, what did I do? And moans and groans that these women call him names, too, so somehow that should make it ok?????? Perhaps James would have been better off making the argument that the others have done similar things and still get to work for Lisa. For example, Schwartzie once dumped a drink on Katie’s head, the women once bullied and slut shamed Lala, and so on. “Lisa, I would have never have said that. I changed. There’s a darkness inside me that comes out. I’m never drinking alcohol again.” Lisa takes a stand. She states that she “has to stand in defense of the women he offends” and James throws an absolute fit.

LVP demands that James grow up and pull himself together and reminds him that his attitude has been sh*t. James sings a sob song about how he is supporting his family financially and how he is paying for an apartment…blah, blah, blah. But Lisa stands her ground. She holds firm and tells him that he needs to change and hopefully, this would be the best move for his life. Wow. I am quite shocked that LVP didn’t budge, especially because her late brother was a young DJ, too. I wonder how long this is gonna last…

TELL US – THOUGHTS ON THE LATEST VANDERPUMP RULES EPISODE? SHOULD LISA HAVE FIRED JAMES?