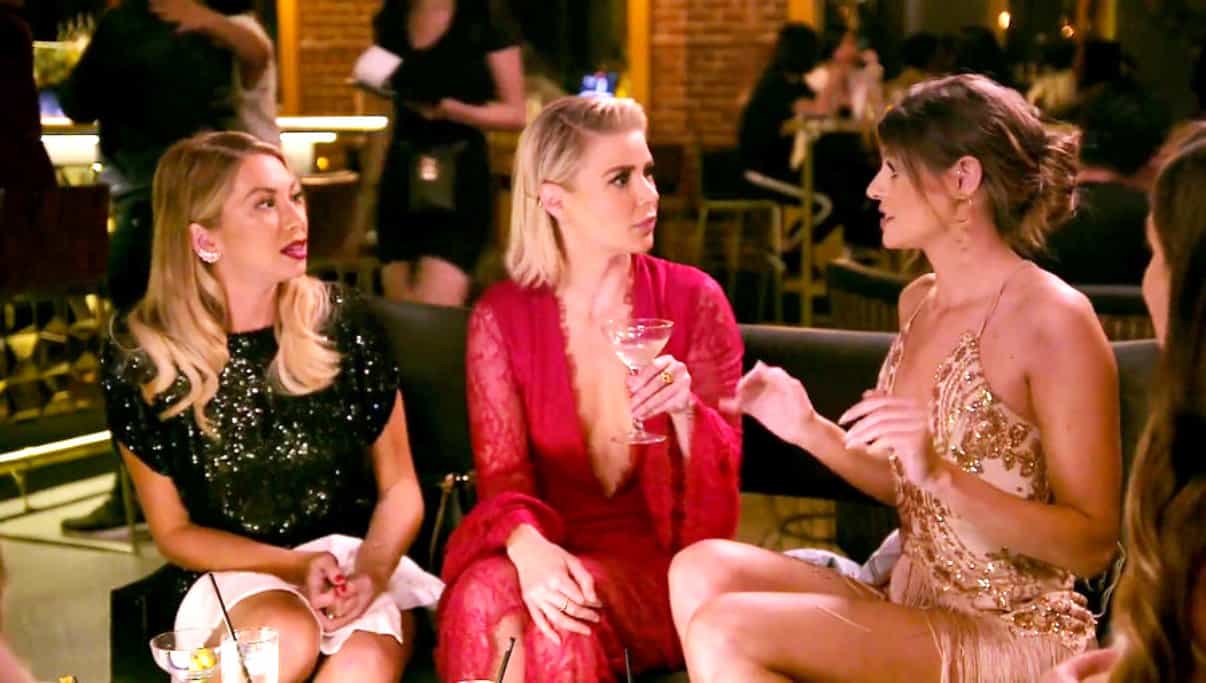 Picking up right where we left off last episode…James is STILL spiraling and his girlfriend Raquel is left picking up the pieces. Evidently, James “cheats all the time” and Kristen has brought one of the lucky ladies he has slept with to the forefront. Her name is Hope and, according to Scheana, “Hope exaggerates a lot of things. Scheana feels the “need to be big sis” to Raquel, particularly when sh*t hits the fan with James.

Raquel asks to speak to Hope, the other woman, alone. She asks to hear “what went down at Coachella.” Hope gladly divulges that James would tell her that he was not “really together” with Raquel. Hope drops a bombshell on Raquel when she tells her that she has been sleeping with James for three years. Raquel “thinks that she needs more proof.” OMG.

Stassi has hit the nail on the head: “If you took a bad James Bond villain and …had him played by an emaciated puppet” that would be less annoying than James right now. LOL. LVP comes out of nowhere and warns James to calm down. She claims that she can see by his face that he’s “on the edge.” LVP grabs Raquel and asks her to try and take care of her out of control boyfriend. Poor Raquel has to try to reel this a-hole in and she is doing her best to squash the situation. Raquel states that she wants to stay with him, even though he storms away from her and she has to chase after HIM. What’s wrong with that situation?

Over at the “Bubby” apartment, Katie and Schwartzie recap the whole James debacle. Katie tells Schwartzie that James “looked at her body with disgust” and they are both over the body-shaming. Katie explains that she is now filled with rage and Katie is a scary lady when she is mad.

James and Raquel try to act like nothing is wrong the day after pride. They are building furniture and discussing pride. James thinks it’s “bullsh*t” the way they “come for” him and Raquel chooses to ignore the haters. A phone call interrupts the convo and it’s Peter, the SUR manager. Peter is calling to disinvite James to his birthday party due to his behavior. Raquel states, “actions have consequences…just remember that.” Raquel wants James to stop drinking completely, but she has zero chance of that happening.

SHOW COLLISION! Teddi, from the Real Housewives of Beverly Hills, comes to visit LVP at SUR. Teddi comes bringing condolences for the passing of Lisa’s brother. Teddi also comes looking for a favor. Her brother is coming out to LA and is looking for a job. Naturally, LVP hooks a buddy up and we all know what happens with fresh meat at one of LVP’s establishments.

Later that night at Peter and Carter’s birthday party, the gang assembles, minus James, of course. Scheana rolls up with Adam and Sandoval rolls up with his twin, I mean, dad. Sandoval’s dad is just as cool as his son, but he’s even more handsome. Is that weird? Kristen rolls up with the other birthday boy, Carter, and the festivities ensue. Somehow, Brittany, Scheana, and Stassi end up outside together and begin talking about the James/Hope scandal. Stassi has a problem with Scheana’s flip-flopping ways, but Scheana can’t seem to help it. It’s exhausting to watch.

“Becoming friends with Ariana was pretty easy.” Ariana explains that she just “gave up with energy to be b*tchy” and bam- a friendship was forcefully formed between her and Stassi. The girls even have the same birthday, soooo naturally, they begin planning their joint bday party that’s gonna be epic. The besties join together and discuss an upcoming girls’ night, sans Scheana. Katie doesn’t really care if Scheana’s feelings get hurt by not getting invited, and Stassi feels like they are “not being a*sholes.” Riiiiiight.

The newly engaged couple, Jax and Brittany , are starting a BEER CHEESE COMPANY ya’ll. I’m dying. DYING. Because of the business venture, they begin taste-testing cheeses. They discuss “business” and Jax’s big news: he officially got his job back at SUR. Obviously, the convo moves onto James and Raquel and Jax, the dumbest man ever, states that “Raquel looks really dumb.” Brittany thinks it would be nice to extend an invite to Raquel for the girls’ night so she doesn’t feel alone with this whole cheating scandal. Jax talks a good game and says that he is unlike James because he wanted change. Insert eye roll.

Sidenote: anyone else super proud of Schwartzie for sticking up for his lady?! “Katie’s not fat, she’s sexy and luscious.” Way to go confronting that d-bag, James.

HOLY GIRLS’ NIGHT. These outfits are hilarious. My girls’ nights usually involve pajamas at someone’s house, but hey, that’s just me. While the girls are living it up, Schwartzie hosts guys’ night. Sandoval comes in with “a really expensive shaker” and then Jax comes in on a motorized scooter. He breaks the news to the dudes about his business venture (#beercheese) and in the mean time, Brittany breaks the news to the girls that she invited Raquel. The gang is less than pleased, especially when Raquel really DOES show up. Why does Brittany have to be so sweet?

I’m sure James is happy to know his lady is chilling with his arch enemies. Things get really awkward, really fast as some of the girls get up and remove themselves from the situation. Ariana and Brittany sit with Raquel and tell her that “no one here wants you to be attacked.” Uh, did they forget about Kristen? That girl is on a mission to ruin James’s life. She won’t stop.

Raquel blames a lot of James’s behaviors on drinking and even Brittany isn’t buying that line. Err, all things considering with Jax, maybe Brittany should stay out of this one! When Katie returns, she immediately lets Raquel know that her boyfriend’s behavior is unacceptable and wonders if he says nasty comments to Raquel as well. Raquel explains that James only jabs at her when he is wasted, but she knows that is not ok. Stassi intervenes “as an outsider” and tells Raquel the relationship is not good, but Raquel is dead set on sticking with James. Katie blurts out that James is making her feel uncomfortable at work and that she is going to talk to LVP about this…

The next day, Katie walks in and sits down with Lisa. She comes sharing the news about James: she lets LVP know that James body shamed her and made her disgusted. Lisa is repulsed by this behavior and calls James “an idiot.” Katie states that she does not “tolerate” the fact that he is derogatory to women and she is fed up. She further says that she cannot come to work any longer because James never experiences ramifications. Katie boldly tells LVP that she is prepared to walk away from her job of almost 9 years and gives LVP an ultimatum, the second ultimatum she’s ever given. It’s essentially Katie or James…and LVP has to choose. How BRAZEN!

TELL US  THOUGHTS ON THE LATEST VANDERPUMP RULES EPISODE?