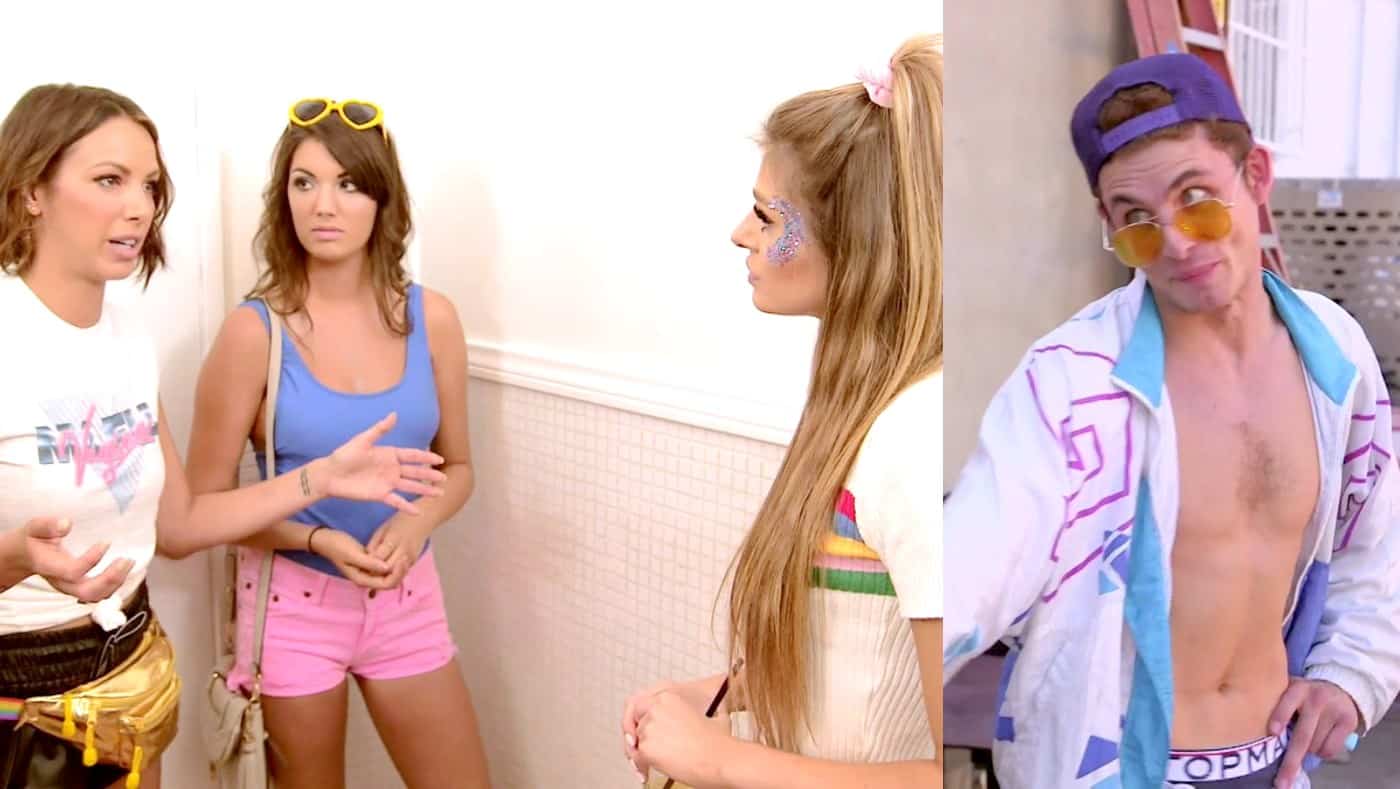 Everyone’s favorite celebration, Pride Day, always means that drama is lurking close by. This is especially true on tonight’s episode of Vanderpump Rules.

In case you missed it, Jax proposed to Brittany with a ROCK of a ring (essentially his late father’s entire bank account) and the couple, in their blissful state, heads back to their apartment. Unbeknownst to Brittany, the entire gang is at their apartment to celebrate the news. According to party-planner Stassi, “In about four seconds, Brittany’s about to get the biggest surprise of her life.” Incorrect Stassi. The biggest surprise of her life was when Jax proposed, followed close second by LVP being in their hell-hole of an apartment .

Jax retells the story of the proposal to a bored Ariana and a very jealous Scheana. The usual suspects are there, popping bottles and throwing back shots. Brittany shrieks off of her balcony that she is engaged, and I am pretty sure that a car alarm went off due to all of her hollering.

Over at “Thirsty Sursday,” James is spinning and hostess Billie Lee shares the engagement news. James seems green with envy that he wasn’t invited to the celebration, but brushes it off as if he doesn’t care. It doesn’t seem like anything is going to kill Jax and Brittany’s mood…except maybe the discussion of Jax’s mom. Jax shares, “I used to be very close with my mom” and Jax explains that since his father passed, Jax really hasn’t communicated with his mom for about 6 months. It’s been awkward and hard for him. Almost as hard as it has been for Kristen to breathe the same air as James Kennedy.

Kristen shares that she’s like “stupid happy” over her friends’ engagement, but naturally the conversation moves to James Kennedy, Kristen’s favorite hobby and interest. She b*tches to LaLa about how “James had the audacity to purposely mortify Brittany so that kid is on my f*cking sh*t list right now.” Meanwhile, Jax makes a nasty speech about going to “consummate the relationship” with Brittany and that leaves the guests grossed out and confused. Guess the party is over?

Pride Day is juuuust around the corner and evidently this year’s theme for the SURvers is the 80s. Sandoval is “looking to model his look for pride on some of the aerobics classes” my mom “took in the eighties.” Ya’ll know Sandoval LOVES ANY reason to dress up because #fashion. Ariana, Sandoval, Scheana, and LaLa peruse the store and search for the *perfect* look. Regarding Jax and Brittany’s engagement, Ariana volunteers that “It’s pretty cute that they’re so excited!” I can smell the sarcasm in Ariana’s voice all the way over here. Sandoval jumps on the bandwagon and says that he is afraid that Jax is solely “changed” because of the recent loss of his father. Ariana is “tepid” about this new Jax.

Over at Kristen’s apartment, Stassi and Kristen slug back some wine and discuss…you guessed it, James. Kristen has a vendetta out for James. She is tired of him getting away with sh*t. Seems like Kristen isn’t the only one who is fed up with James. LaLa fills her buds in on James’s newest crummy remark at Coachella. Evidently, James went up to LaLa’s “dude” Randall and said,“Oh come on. Lighten up. We all know each other inside and out if you know what I mean.” Gross.

Like any good detective, Kristen gathers as much information about James as possible. Up to and including finding out about James’s sidepiece: Hope (WHO?!). Turns out that James and Hope hook up continuously, even though James is “dating” Raquel. Seems like Kristen should put that info in her back pocket.

Later, Jax pays a visit to LVP over at her castle, er, I mean house. Jax attempts to smooth talk LVP and feeds her BS like “she’s his family.” The reality is, homeboy just spent every penny he had on Brittany’s ring, and he is broke AF. Lisa reminds Jax of all of the awful things that happened last year, but Jax tells Lisa that his father’s death has been somewhat of a wake-up call, and he seems a bit vulnerable begging for Lisa’s forgiveness. She allows him to work on the “little bar in the garden” for Pride and Jax promises to be a good worker.

“Honestly, James Kennedy couldn’t be living a better life,” says James Kennedy. Woof. Tom and Ariana are over for a nice adult-like dinner at James and Raquel’s new apartment. This double date is a snooze because you can tell that Sandoval just wants to talk about #fashion. Sandoval does his best to warn James about his questionable behavior, but it backfires because he says things like, “You are literally being like the white Kanye.” Um, please don’t Sandoval. James’s head is already too big and to him, that’s a compliment! Sandoval suggests that James get Brittany and Jax an engagement present to smooth sh*t over and James listens intently to his life-coach, Sandoval.

“This is my sh*t. 80s. Pride. This is like Christmas”- Scheana. There is some weird 80s sitcom segment that is super strange and everyone’s in neon 80’s gear. SUR is bumping and the crew is (fake) working their butts off. Scheana is lip-synching to her “Good as Gold” single and a WASTED James Kennedy jumps on the bar, borderline strips, and begins rapping. It’s very unfortunate. In the meantime, Kristen and her secret weapon Hope (who is this chick and where did she come from again) make their secret entrance. Kristen confronts Raquel, with Hope, and immediately discusses James’s infidelity. Kristen continues by saying, “riddle me this…you are dating the most manipulative piece of sh*t on the face of this planet.” Obviously, Raquel does not believe crazy Kristen, as she IS James’s ex.

The queen herself finally arrives to SUR for Pride. Dressed in a total pink ensemble, LVP gets to meet Stassi’s new man, Beau. Lisa invites the couple to sit at her table and you can see Beau gets nervous. Stassi tells LVP that, “I told him that meeting you is like meeting my dad.” Lisa realizes that Beau is waaaay better than Stassi’s last man. Lisa beams and gives her approval because Stassi seems way more herself with Beau. Not everything is peachy at SUR, though. I mean, James drunkenly stumbles over to Jax to congratulate him and I found myself holding my breath. Surprisingly, James apologizes to Jax and Brittany and gifts them a full basket of Patron products. While some of his relationships are getting mended, James finds himself in some serious hot water with Raquel. She explains how she was ambushed by Kristen and Hope and questions if James has slept with Hope.

James throws a fit and says that the girls are “lying through their teeth” and Raquel claims that “she’s done with it.” Jax watches this unravel and you can tell that he is enjoying this thoroughly and even sees a bit of his “past self” in James. James claims that “people love me” and that all of the girls are just stalkers, but I am going to have to disagree.

Raquel runs outside and finds herself surrounded by Scheana and LaLa. LaLa tries to talk some sense into Raquel and even goes as far as saying, “you cannot be this dumb.” Raquel wants LaLa to support other women and LaLa wants Raquel to “wake up and put James in his place.” James is WASTED and swears to Sandoval that this whole Hope rumor isn’t true. Sandoval doesn’t quite believe James and Kristen, with Hope in tow, storms over to break up the pep talk. Katie slurs to James, “look at you dude.” And James fires back with, “those shorts aren’t working for you, babe. Lose some f*cking weight.” Shockingly, Katie doesn’t take the bait, but that doesn’t mean that everything is getting better. James stalks down the parade route muttering, “No one can replace James Kennedy baby. I’m the star.” I’m sorry, what? This guy…