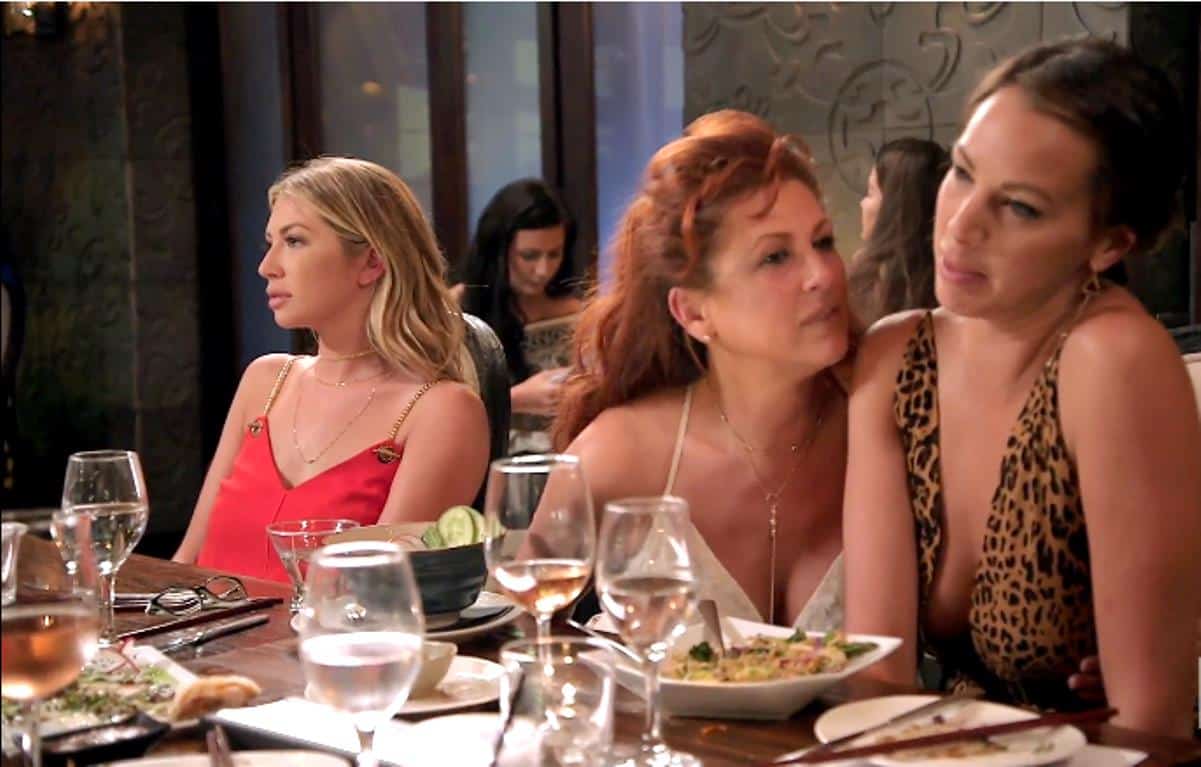 It’s the aftermath of the Ariana/Stassi birthday party and everyone is an absolute mess the next day. The crew is putting it all together and realizing that Stassi pulled her ever-classic-birthday-girl-meltdown…except this time, her boyfriend, Beau, was the target. A messy hung over Stassi cry-apologizes to Beau who responds to her by saying, “You d*ckpunched my heart.” I’m sorry, what? This guy is hilarious, especially when he tells Stassi how it is.

Stassi voices her concerns over the behavior she exhibited the night before, but Beau offers her some relief: “I’m not walking away. We will work this out.” What a champ. Or a crazy person. I haven’t decided yet.

Ah, James. Homeboy meets up with his buddy, Arthur, a life coach. Clearly, he has made an impact on James’s behavior, since James has fallen back into his “old James ways.” Arthur tells James he has to see it to believe it and claims a mantra is the only way for James to be the man he wants to be. James comes up with three words, to sum up, his sober behavior and he says, “honest, caring, driven.” That’s James’s mantra. Gag. Try being honest to your girlfriend, caring to your boss, and driven when it comes to your career.

Over at SUR, LVP decides to hold a staff meeting to “keep the lines of communication open.” Naturally, Sandoval turns the conversation to TomTom, but Lisa guides the subject back to everyone’s least favorite employee…or should I say, ex-employee. She shocks the employees by telling them that, for business purposes, James will be returning to DJ on Tuesdays. The gang loses it, particularly Jax. Jax mouths off to Lisa (what else is new) and there is a sense of general chaos. Brittany also gets in on the action, as she exchanges some words with Lisa, continuing her trend of redirecting her anger at Jax towards others!  LVP continues to claim that the treatment of women is of paramount importance to her, but hey, business is business #amiright??

“Do I look literary chic?” Stassi, I don’t think you could ever look that way, but you did just sign a book deal, so touché. Stassi talks about her “basic b*tch” manifesto to-be and realizes that she has about 14 seconds to get her book written. This causes her some anxiety, as she has a lot of work ahead of her! Once Stassi wraps up the conversation with the publishers, she informs Beau that there’s gonna be a mom get-together. Katie, Kristen, AND Stassi’s mother are all going to be at Kristen’s clothing line launch party and Beau should consider himself warned. These ladies have no filter…

LVP is holding an audition for Sandoval and Schwartzie – not the type of audition you’re thinking…this is a chance for Tweedle Dee and Tweedle Dum to showcase three potential cocktails for TomTom. Lisa is brutally honest but is able to find a few drinks that will debut at the upcoming Daily Mail party. Lisa is excited and a bit nervous about the event, but she has decided to bring in her star designer to help coordinate: Nick Alain. For a moment I thought she was going to bring Stassi in cuz she is an event planner (duh), but I was relieved to hear she went with a professional.

Katie, Stassi, and Brittany roll up to Rage Ground: a place where you can “go in and break a bunch of sh*t without any consequences.” Stassi claims that she is super enraged, Brittany hollers in her Southern accent, and Katie just looks mad that there is no tequila. The ladies claim to feel much better after the session and then they sit around and gossip, their favorite hobby, and interest. Katie and Stassi claim to be looking out for Brittany when it comes to Jax, but it comes across as them attacking her relationship. Speaking of “relationships,” Scheana has found a new guy to dig her claws into: Robby, a Bachelorette runner up. If you ask Scheana, they’ll be married tomorrow…the only issue is that Adam, the other guy Scheana is dating, also happens to be best friends with Robby. What a messy, fake a*s version of the Bachelorette.

Even LVP’s DELIVERY TRUCK IS PINK. This woman is #goals. Tom and Tom somehow wind up in front of TomTom and try their very best to get involved in the party set up. Lisa diverts them long enough that they get distracted talking about something else and just like that, off the Toms go into the afternoon.

Look at these “kids” growing up! Kristen has a t-shirt line! And she is throwing a launch party! I hardly recognize these degenerates anymore. While Kristen poses and smiles, LaLa and Ariana chat about James. LaLa decides to unblock the guy and reach out to him. Since the passing of her father, LaLa realizes that she needs to be nicer and more caring, hence the second chance sit-down with James.

In the meantime, Brittany shares the Rage Ground experience with Jax. She doesn’t leave glaze over the part where Katie calls Jax out for his suddenly questionable “best boyfriend ever” behavior and this just burns Jax up. Speaking of burning people up, turns out that the client specifically requested James to be the DJ at the Daily Mail party held at TomTom. Oooph! Talk about awkward for Katie, as her hubby is directly (well kind of) involved in TomTom and James directly attacked her.

Later at the party, Stassi’s mom approaches Beau and begs him not to go anywhere. She tells Stassi, in front of Beau, “I don’t want you to be yourself and mess it up.” Sweeter words have never been spoken by a mother to a daughter. Stassi’s mom continues to look like a buffoon when she tells Beau that he is up here and Stassi is down there. Her mom doesn’t hold back. Ouch!

It’s time for the meeting: LaLa vs. James. LaLa suggests James get down to the bottom of why he feels like he can attack people over and over again. LaLa tries to make it clear to James that his behavior is really bad and James jumps to how he’s helping his mother financially and then we hear his sob story. LaLa falls for it and says that she is there to support him and before we know it, the best friends (again) are chatting about getting into the studio and working on some music together. What just happened?

The next evening, Stassi, Katie, Kristen, and their moms head out for a dinner to celebrate Kristen’s launch, but really just to have cocktails and gossip. Stassi’s mom appears to be wasted and begins oversharing information at the table, thus enraging Stassi. Instead of addressing the behavior in private, the mother-daughter duo fights outwardly, causing awkwardness for the entire table. Stassi’s mom explains, “My ovaries are being absorbed by my body. I’m in menopause” and somehow the intensity escalates to the point where Stassi’s mom leaves the table.

What a disaster! Katie’s mom just smiles and Kristen’s mom looks at Stassi’s mom like she’s a psycho. Why the DRAMA?! Katie says it best. “I feel like I’m watching my past and my future colliding.” Funny how much Stassi is JUST LIKE her mother… if that’s the case, Beau better run!