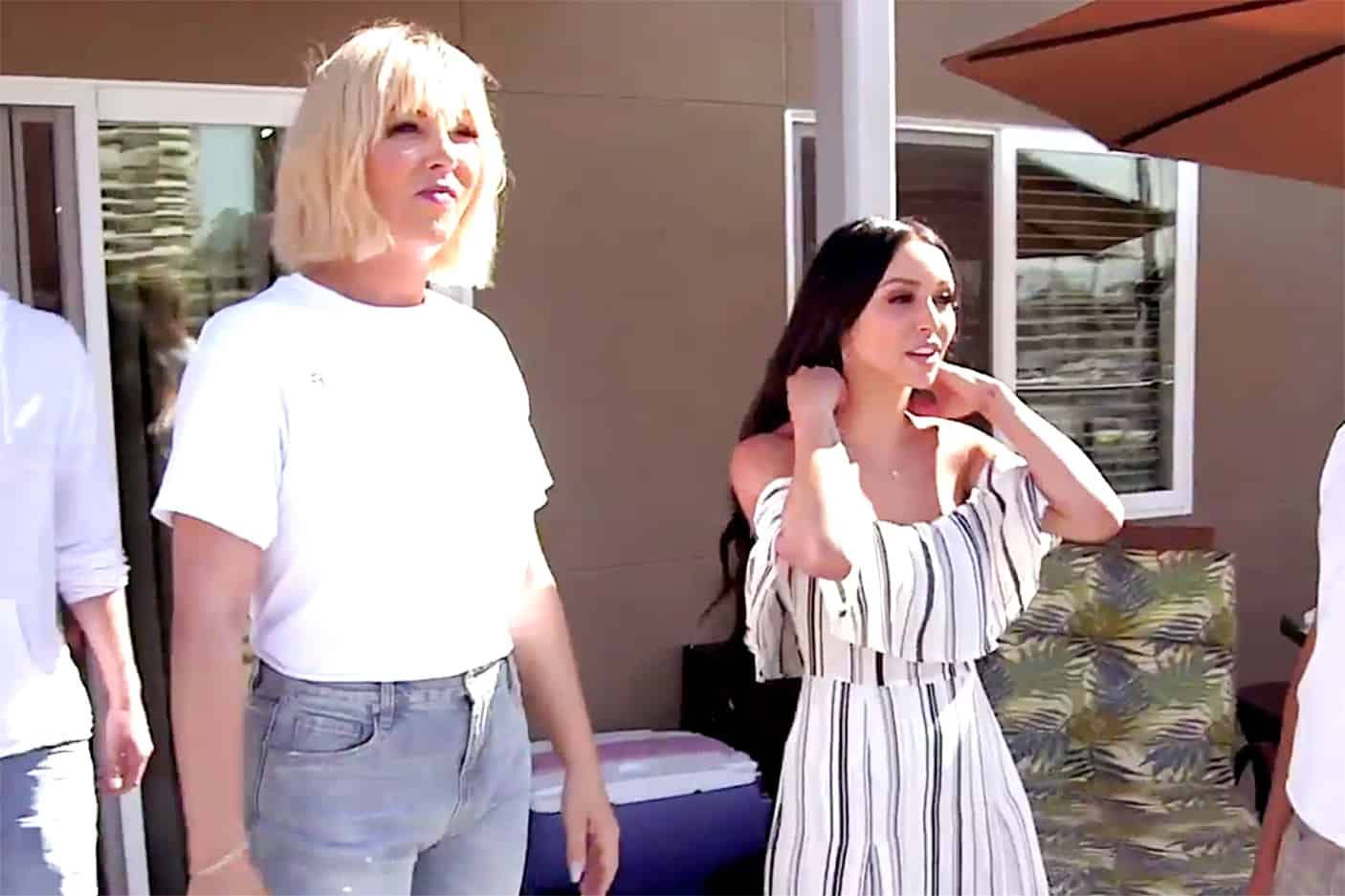 The wheels seem to be falling off over at TomTom and LVP is losing her marbles, as they have already committed to hosting the Daily Mail party. There’s no kitchen, no electricity, no gas, no water, and Nick Alain, Lisa’s designer is sweating. Lisa is doing her damndest to keep Sandoval and Schwartzie out of her hair whilst planning this event.

Lisa denies tweedle dee and tweedle dum admittance to the prep at TomTom and the fellas are devastated. At least now they can make it to Scheana’s housewarming party….all the way in Marina Del Rey. In the words of Schwartzie, “Marina Del Rey, might as well move to Jersey.”

ROAD TRIP! The strangest trio head out for a ride to Scheana’s housewarming party: Jax, Brittany, and LaLa. Bizarro. LaLa fills the gang in on the “girls’ night” debacle with Billie Lee. Jax looks disgusted and Brittany just rolls her eyes and eats snacks. A girl after my own heart.

Meanwhile, Stassi, Katie, and Kristen get together for some drinks (and food) cuz they opted out of Scheana’s housewarming party. The girls would rather rip their eyelashes out than celebrate Scheana’s new digs because it is “geographically undesirable” plus, James and Billie will be there…and we all know how much they LOVE those two.

Eventually, the guests all made it to the “west side” for Scheana’s housewarming, but naturally, Jax and Sandoval begin THIS time to discuss their upcoming birthday plans. These people just can’t let someone else get the spotlight, huh? While everyone mingles, LaLa reunites with James, yet again. She continues to promise they will “never be back in that place” they once were when they were besties. Sigh.

In other news, Scheana shares that last night she slept with Adam, a SUR barback. What a shocker! Didn’t see that one coming…said no one ever. How about Scheana just tries to be independent for like, I don’t know, 17 days, and then we can test to see if she really is falling for someone…
LaLa continues sharing with James and lets him know that she is displeased with Billie’s behavior at girls’ night.

On cue, Billie enters, ready to take LaLa on. Billie tells LaLa exactly how she feels, but LaLa calls Billie out for her “transphobic” comments. When LaLa has enough from Billie, she storms out of the room, dismissing and p*ssing off Billie. Billie shrieks after LaLa, “You’re not f*cking better than me LaLa. You’re not better than anyone just because your man’s rich.” I mean, is it true???

Later, Scheana needs some new headshots, since she is ready to “challenge herself” and act again. Gag. Whilst prepping for the shoot, Scheana overshares about her sex life with Adam because that’s what she does best. “I need to stay single.” Same storyline, different episode.

It’s finally time: the TomTom big reveal for Tom and Tom. The boys are over the moon and can hardly contain their excitement. Lisa meets them outside and blindfolds the Toms, just to add extra suspense. Upon ripping the blindfolds off, they were *almost* speechless for a moment, but then they begin blabbering and crying, as they should be.

Today is Tom’s 36th birthday- 36!!! Find me a 36-year-old man who wears a hat like that and takes blow job shots. This guy… While the guys are taking shots without their hands, Sandoval shares how “anti” birth Ariana is. She is very adamant about how much she wants to do her prior to even thinking about having/adopting kids. On the flip side, Sandoval tells his boys that the fact that Ariana doesn’t want kids is a deal breaker. Yet, he has been with her for 5 years. Maybe it’s time for that awkward conversation…

Now the party can start- James Kennedy enters Sandoval’s birthday celebrations. This is not to be confused with the upcoming JOINT party Sandoval will be having with Jax. The guys have cocktails and cigars and a GREAT time. Somehow the conversation turned to the guy’s girlfriends “dipping their toes in the lady pond.” Sandoval overshares and starts by saying, “Ariana and LaLa had been out all day drinking…” Ariana climbs in the back and LaLa starts “going to town.” Needless to say, it’s onlyyyyy a matter of time for that “rumor” to spread like wildfire.

The next day at Jax and Brittany’s apartment, LaLa comes to hang. Obviously, Jax takes this moment to ask LaLa if Sandoval spoke the truth about her sexual escapade with Ariana. LaLa vehemently denies this rumor, although it is actually 100% true. Jax further divulges that James shared LaLa’s sexual history with the crew. LaLa is mad…and so is Ariana. We know this because when a drunken Sandoval stumbles into SUR to visit with his lady, Ariana states she just got off the phone with LaLa. Ariana further says to Sandoval, “You told something that was not your business to tell.” Then she demands he leave SUR, but not before telling him, “Your hat’s annoying. Your f*cking face is annoying. Goodbye.” Classic.

Ariana is still beyond livid that Sandoval shared her sexuality with a lot of people, and Sandoval apologizes for his behavior. All’s well that ends well and off the couple goes to the roller rink for one heck of a 36/39-year-old birthday party! Yes, you read that right. 39. Jax is turning 39!
I have to admit, this does seem like a pretty fun party. Everyone is dressed in their 70’s roller derby gear and there’s food, beer, and cake and what more could anyone want?

LaLa finds Ariana and the two girls talking about the rumor circulating. Ariana explains that she is not embarrassed about what went down (pun intended), just upset that everyone is talking about it. They hug it out and go off on their merry way.

More people begin to make “amends…” begrudgingly. I mean, Katie and Billie have a tiny moment where Katie officially invites Billie to the next girls’ night (phew) and LaLa demands respect from James in the future when it comes to sharing her sexual moves. Before the conversation ends, Raquel squeezes her way into the convo and LaLa delivers the line of the century to her. “Raquel I’m sorry I called you a twat. You’re welcome.” And then LaLa skates away. A better exit has never been made in the history of Vanderpump Rules.