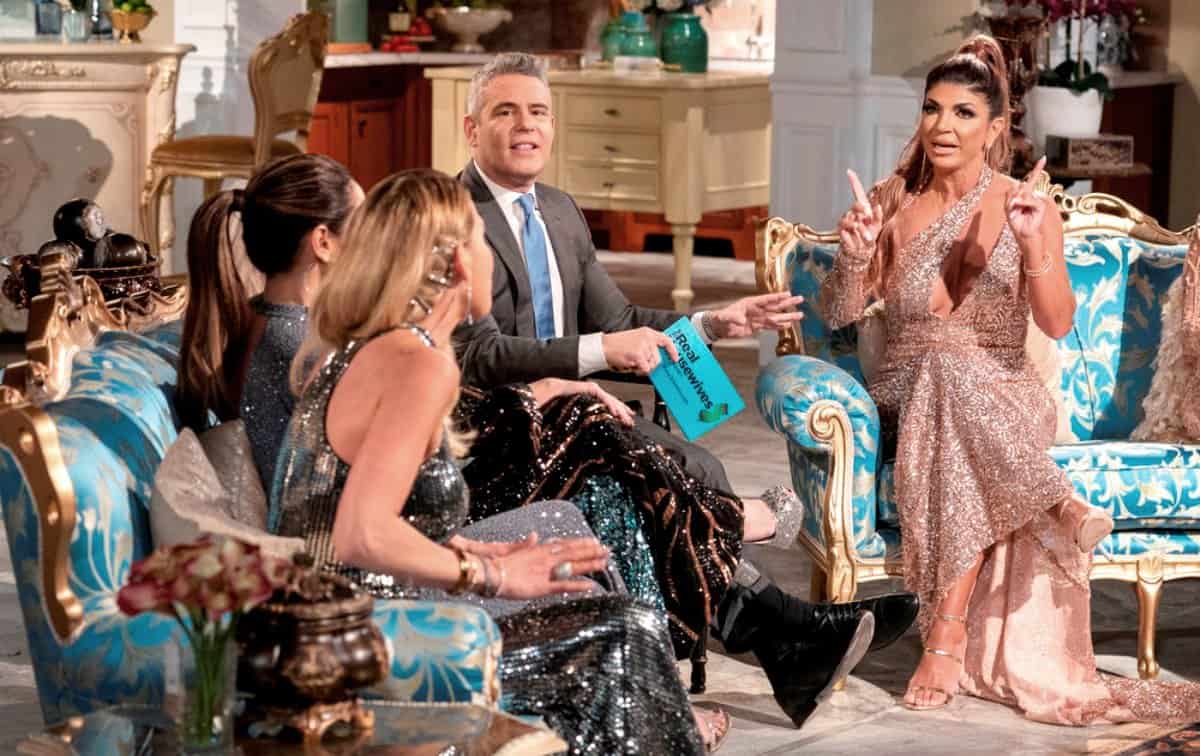 The second installment of The Real Housewives of New Jersey reunion aired last night, and it went pretty much the same way as the first installment–Teresa acted crazy, Melissa tried to defend herself for..well, I’m not even sure what, living, I guess, and everyone else just sat there watching like useless underlings.

When we picked up with the ladies, Teresa had launched a box of Kleenex across the set at Jackie. Seriously? Kleenex?! Who actually does that? Jackie barely reacted, other than to look at Teresa like the lunatic she is, and say “you’re gonna throw something at me, aren’t you on parole.” Lol, it was priceless, not to mention risky.  Everyone knows Teresa does not like to be reminded of the fact that she was in jail–even though we all know she was, and it played itself out on television, in front of an audience of millions.

Predictably, Teresa did not appreciate hearing the word parole, and called Jackie a “white trash b***h.” Strong words for a felon, but okay.  Teresa then launched into her spiel from last week about how Jackie is “obsessed” with her, and has been for the last ten years, during which she followed Teresa on social media and showed up at her book signings.  Jackie admitted that she was a Teresa fan, but I think it’s fairly safe to say that she isn’t anymore.  And knowing Jackie, she was probably just interested in writing some sort of tell-all article about Teresa.

And speaking of articles, viewers wanted to hear what she had to say for herself about the missive she’d written about Jennifer and her “spoiled” children. Jackie maintained her position that the article was nothing but complimentary of Jennifer’s children, but said that in retrospect, she probably should have given Jennifer a heads up before publishing it.  For her part, Jennifer agreed that Jennifer hadn’t said anything about her children or her lifestyle that was negative or untrue, but that didn’t stop her mama bear instincts from kicking in at the mere mention of her family.

Jackie was also asked about her own family.  You may recall that little bomb she dropped about her parents actually being in a similar situation to Teresa and Joe once upon a time.  The couple were on house arrest following a conviction for their own creative bookkeeping back when Jackie was in college.  She joked that they were on house arrest at different times to avoid being stuck in the house together, and said that they still basically lived separate lives.  They maintain two residences, although they’re still married and have dinner together most nights.  Hey, whatever works.

And speaking of unconventional marital arrangements, what’s with the rumors about Teresa being spotted “canoodling” with another man withOUT her wedding ring while on vacation in Miami over New Year’s weekend?! Well, it sounds like there might be quite a lot to it, actually.  Teresa said she spent the weekend in Miami partying, and that she’d actually been flirting with a lot of people, including a female fan, who asked her to “make out.” But Teresa said she declined the sapphic invitation, or at least got a rain check, as she told the woman, “not right now.” As far as leaving her ubiquitous diamond sparkler at home, she said “so what?” and pointed out that Joe never wore his wedding ring.  Uh Oh! Sounds like trouble to me, but what do I know?

Andy decided to move on to Melissa, and her search for her potential long lost half-sister.  Her searches haven’t yielded a sibling yet, but Melissa said that if one turned up, she would embrace, as she would be another link to her father, who died when Melissa was just 17, a pivotal time in a woman’s life. Melissa became teary-eyed as she spoke of her father, and how his absence greatly impacted the rest of her life, and expanded on how very real her “daddy issues” were.  Teresa, of course, interrupted the touching moment, and seized upon the opportunity to make it all about herself–it is “The Teresa Show,” after all.

Teresa said that girls did, in fact, need their fathers around, and that was exactly why her daughters needed their father with them, and not in Italy, where he is scheduled to be deported after his release from um–camp. She also took the opportunity to start another argument with Melissa, telling her that she had a sister “right there,” and really should start treating her as such. She added that Melissa should be sitting on the couch with her, and not across from her with Margaret and her ‘new best friend,’ Jackie.  Melissa said she had no idea what Teresa was talking about, and reminded her that Andy is the boss of the show, and set the seating arrangements–not her.  A solid point, but, as usual, Teresa wouldn’t be swayed by logic.  She said that Melissa always “sides up” with people who are against her.  Melissa asked if she was going crazy, or if Teresa was really just coming for her out of nowhere. No, Melissa, you’re not crazy–Teresa is.

Melissa asked Teresa what she was talking about, and Teresa gestured toward Jackie, and said “hello!”  She said that Melissa hadn’t taken her side against Jackie, and  Melissa pointed out that Teresa hadn’t taken her side when Dolores had come for her.  Margaret chimed in at that point, and astutely reminded Melissa that Teresa had also failed to take her side when Jennifer had thrown glass at her in Mexico.   Of course, Teresa, called on her own lack of loyalty, quickly brushed it aside, and her only response was that Melissa had only known Jackie for “five minutes.”  Melissa said ‘so what’, adding that she liked Jackie, and asked Teresa why she seemed to be so “insulted” by that fact.

Teresa said that she wasn’t insulted, and that Andy had asked her a question, and she was simply answering it. Had he?! From what I could tell Andy had asked about Melissa’s search for her sister. But after listening to Teresa screeching for the last 15 minutes, who even remembers?  Melissa said she guessed it was “Teresa’s world,” which only caused more problems as Teresa told her not to ‘f***ing look at’ Jackie.  Melissa said it was no wonder she was looking for another sister, as she needed all the backup she could get.  Teresa began to say again that Melissa already had a sister in her, but luckily Andy cut her off, and once again attempted to steer the conversation back to someone other than Teresa.

Andy asked Melissa about her upcoming 40th birthday, which she calls “the f word,” and asked if Teresa had any advice for her younger sister-in-law, as she entered her fourth decade of life.  But Teresa just couldn’t play along.  She told Melissa to “ask Jackie” for advice.  Melissa told her  she was being ridiculous, and said she was “cursing like a psycho.” Teresa said that, of course, Melissa now suddenly had a problem with cursing because Jackie did. Hold on–I thought Teresa said Jackie was obsessed with her, but it was starting to sound like it was the other way around.  All the same, Teresa said she loved Melissa “more than anything.”  Oh, yes, I could feel the love right through the tv!

Later, Joe Gorga joined the ladies, and discussed his relationship with his and Teresa’s father, Giacinto, and how it had led to even more issues between Teresa and Melissa.  Joe also mentioned that his brother-in-law, Joe Giudice had “been in his father’s ear” for years disparaging Joe Gorga, and painting a portrait of him as a prodigal son, who cared little about his family of origin.  Joe Guidice had all the time in the world to do this, Joe Gorga explained, because he spent all of his time “hanging out’ while Joe Gorga was working hard to develop a successful (and legitimate) business.  When asked why she hadn’t used her influence over her husband to make him spend more time with his father (Ugh! This again?!), Melissa said that she didn’t control her husband’s actions. Thank you!

What is this anyway? Joe is a grown man, why should Melissa be held responsible for what he does and does not do in relation to his father? Maybe Joe doesn’t want to spend any more time with his dad. After all, sometimes men have “daddy issues” too. And besides, as Melissa pointed out, nothing is good enough for Giacinto.  In fact, he lives in Teresa’s house, and Melissa said that he still complains that she doesn’t spend enough time with him, but she never threw Teresa under the bus because of it.  But, of course, Teresa disagreed, and said she does absolutely “everything” for her father, and ‘thanked God’ for herself and her children because otherwise, her father would have no one to care for him. Good grief!

Teresa also maintained her position that Melissa could get Joe to do what she wanted if she really wanted to. Melissa said she couldn’t control her husband, and when Jackie agreed with her, Teresa said, of course, she agreed with Melissa, adding that she ‘didn’t like’ Jackie (Gee, you don’t say!) because she had come between the sisters-in-law.  When Melissa asked again what the hell Teresa was talking about, she launched into her diatribe about Jackie mentioning Joe’s incarceration.

Dolores, Teresa’s most loyal soldier stepped up at that point to offer a justification for Teresa’s rant, saying that Jackie bringing up Joe being “away” had hurt Teresa “to the core.”  Melissa said it hurt her to the core when Dolores had implied that she and Joe had purposely planned on being away during the anniversary of his and Teresa’s mother’s death.

Joe Gorga, ever the peacemaker, told both his wife and his sister to kindly STFU, and stop “talking s**t” because deep down they loved each other, and that was that.  One viewer agreed, and said that she felt the tension between Teresa and Melissa was actually ‘sexual’ in nature.  I’m not touching that one, but it elicited laughter from the ladies, and dispelled some of the tension whatever it’s a source) for the time being anyway.

We also realized another reason Teresa may be so stressed out.  It’s quite likely she may soon become a divorcee.  She told Andy that if Joe is deported after his release, she and their daughters will not be joining him in Italy.  She also finally admitted that she was angry with him for his crimes, and the fact that she’d spent time in jail. This is a first for Teresa, as she’s always defended Joe in the past, but she said that was before losing her mother just 8 months after her release from her 11-month stint in the clink.  She said she can’t seem to forgive Joe for the time she lost with her beloved mother.  For this, I can’t blame Teresa, and it’s good to hear her finally speaking her truth.  She was actually calm and collected as she spoke of Joe, and the sentiment had a finality to it, but who knows what the future holds?

One thing we do know for sure is that the ladies will be back next week for the explosive final installment of the reunion…stay tuned!

TELL US – WHAT ARE YOUR THOUGHTS ON THE RHONJ REUNION RECAP & EPISODE?