Vanderpump Rules Recap: James Lashes Out at Toms for Disinviting Him from Boys Trip & Sandoval Calls Katie a ‘Bully!’ 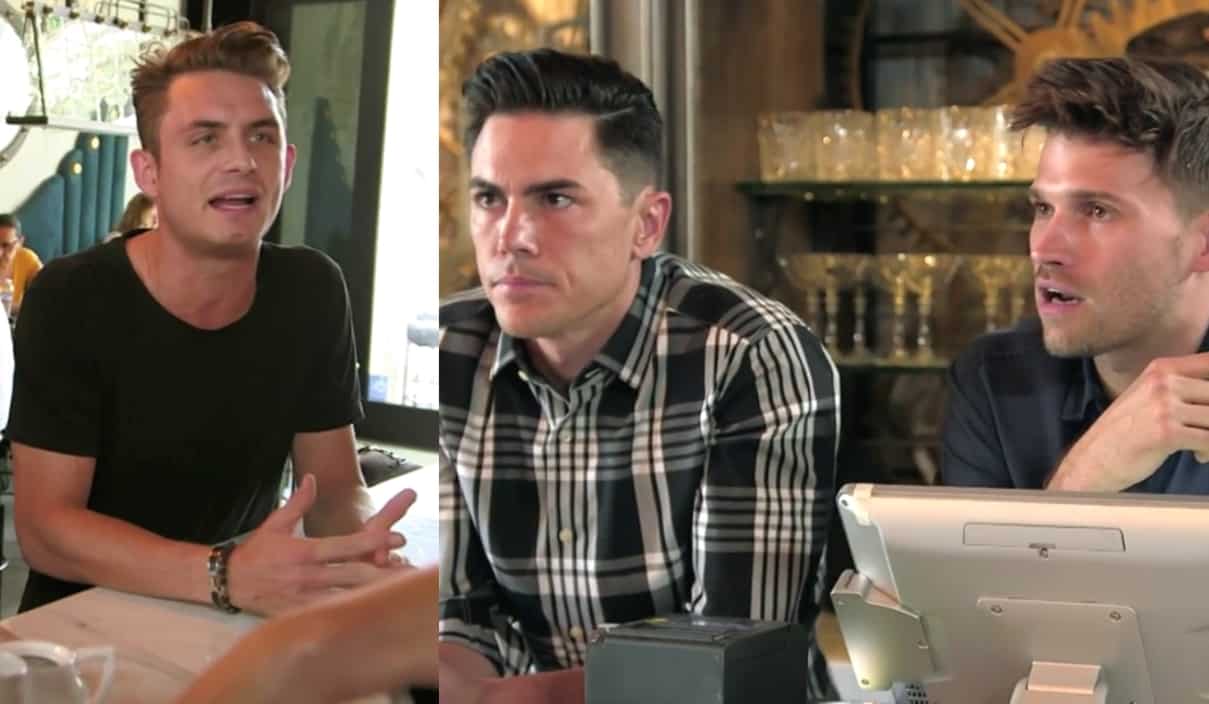 TomTom is on the cusp of opening, so that can only mean one thing: group trip! On this episode of Vanderpump Rules, we find out who makes the cut and who is left behind…

Schwartzie looks like he is learning Pythagorean’s theory over at TomTom. The reality is that LVP is just showing him the POS system and the table numbers pre-opening day. The other Tom is clearly missing from this training since “something came up…” and it turns out that something is perusing a motorcycle shop with Ariana. After Sandoval removes his “vegan leather jacket,” he explains that he has been thinking of buying a motorcycle for a WHOLE YEAR and that he needs to make a grand debut at TomTom.

Ariana does her best to bring him back to Earth: “In the midst of all of that you think you should spend $15,000.00 on a motorcycle just for the fun of it?” Sandoval tries to justify his purchase and he settles on a white motorcycle, which totally compliments his purple shirt and gold shoe #fashion.

Brittany is beginning to get back to herself after her wisdom teeth removal. Stassi, ever the nurse, visits Brittany and brings some jello shots because, yea, that’s what she needs. Stassi fills Brittany in on the whole Carter fight that she (luckily) missed out on. Brittany and Stassi commiserate over the bad relationship Kristen and Carter are wrapped up in and thank their lucky stars that they have great guys (LOL).

James’s DJ career is growing rapidly since being fired from SUR. He is living it up, spinning at OHM, and it’s perfect because the triplets are back! Schwartzie’s brothers are in town to see TomTom, so the fellas decide to show them a great time…even if James Kennedy is supplying the music. Sandoval suggests a “bachelor party before getting married to TomTom” and I can’t help but roll my eyes. When James comes up to visit the guys in the VIP area, the Toms share this bachelor party/group trip idea with him. In the excitement, they even actually INVITE James to join in on the adventure. Jax is the only one who realizes the girls may not be thrilled with the idea of James coming…

Whilst playing with some kitties at the cat cafe, Ariana, Katie, and Stassi gossip about Kristen. Stassi will never get over being “saged” by Kristen and can hardly believe Kristen’s lovey-dovey recent posts about Carter. As the girls do what they do, Tom and Tom decide on a destination for their last hurrah before TomTom gets rolling. Puerto Vallarta it is. LVP has even suggested that the boys go get it alllll out of their systems, so it seems ok! Excited, Schwartzie phones his wife, Katie, and tells her they are going to a “sexy hotel” in Mexico.

Katie has Schwartz on speaker phone and once she hears the guest list, the smile on Katie’s face fades. The name James causes absolute rage for Katie. “I’m your wife and should be there. Boom. Pulling rank. That’s all.” WOWWWW. Now I see who wears the pants in that relationship. Yikes. Even Ariana sees how dumb it was for Sandoval to invite James on the trip, but she is beginning to get fed up with Sandoval always getting the blame.

In an attempt to show the cameras that alas, the relationship is thriving, Kristen and Carter enjoy a lovely anniversary dinner. Of course, Katie and Stassi come up in conversation and Carter explains that what they were saying is the type of stuff “we keep in house.” Huh. Kristen tells him that they need to be solid for a little while and be nice to each other, but it seems like a dead end fight, especially because neither person can admit to being wrong/is willing to change. Deadlocked.

Why are Stassi and Schwartzie going for a “spa day” TOGETHER? Does anyone else think they have the strangest relationship ever?? As they wait for the appointment, naturally they pop bottles and Stassi uses this as an opportunity to attack Schwartzie for inviting James to Mexico. Before we know it, Stassi gets vajazzled and Schwartzie gets his chest waxed 40-Year-Old Virgin style. Now they are trip ready.

It’s Tuesday night at SUR and ya’ll know what that means…Girls Night In. The place is popping and Scheana bribes Katie to come to see her new spot with some enchiladas…and tequila. Desperate for friendship much? Katie makes her way over to Schwartzie, Stassi, and Beau. She goes monster on her husband and tells him that she’s a little “disgusted” that Sandoval is “trying to bring James along as his plus one.”

Katie insists that Schwartzie talk to Sandoval and disinvite James to Mexico. Like right now. Schwartzie promises to take care of it and so he interrupts Sandoval, the busy bartender. When the guys meet out back of SUR, Schwartzie shares that he “feels like the wind is getting sucked out of his sails.” He asks Sandoval to disinvite James and does his best to explain that he has to respect his wife. I am impressed that Schwartzie is taking a side, but once Ariana joins the guys outside, the whole tone changes. She comes out hot toward Schwartz: “I have a slight bone to pick with you. I’m really f*ckin sick of my boyfriend always being the mouthpiece.”

It turns out that Ariana is there to lay the truth out on Schwartzie. Katie makes her way outside as things get heated. Sandoval has about had it with Katie and tells her that “we’ve given you allowances,” yet she continues to hold a serious grudge when it comes to James. He reminds her that she has no problem being mean to her friends and her husband, but when someone says something bad about her, she makes it miserable for everyone. Sandoval even calls Katie a bully and Schwartzie does his best to have his wife’s back. Sandoval heads back inside and finds LVP. He fills her in on the recent James drama (as if she cares…let the lady drink her rose in peace) and basically tells LVP that the recent situation is BS. LVP reminds Sandoval that James “needed a lesson,” but that he needs to figure it out with his soon-to-be-partner’s wife. Awkward.

The next morning at TomTom, things are a bit tense between the two Toms. Schwartzie demands to know what happened last night and puts his foot down: No James in Mexico. Sandoval realizes that James shouldn’t come and that because Schwartzie is his business partner, they need to tell James to unpack his bags since he ain’t going.

Once they work through that rough patch, Tom and Tom come to talk to LVP about the upcoming friends and family event. They also practice the POS system in front of LVP and as if on cue, James strolls into TomTom. It wouldn’t be an episode without James begging LVP for a DJ-ing gig, and it seems as if he has worn LVP down because she actually said YES to him working at Billie Lee event.

He also asks if he can DJ at the TomTom party, but LVP puts her foot down when it comes to spinning for that. Sandoval uses this topic to transition to the Mexico fiasco. Schwartzie chimes in and tells James that unfortunately, he is no longer invited to join them. James loses his mind and I think now would be a great time for him to practice his anger management and breathing techniques he boasted about to LVP just a moment earlier. James does a FABULOUS job of showing LVP just how far he’s come in controlling his emotions…NOT. And THIS is exactly why James is no longer the house DJ. LVP and Sandoval essentially escort James out of TomTom and we are left with a “to be continued…”

TELL US – THOUGHTS ON THE LATEST EPISODE OF VANDERPUMP RULES? SHOULD THE TOMS HAVE UNINVITED JAMES? IS KATIE A BULLY?