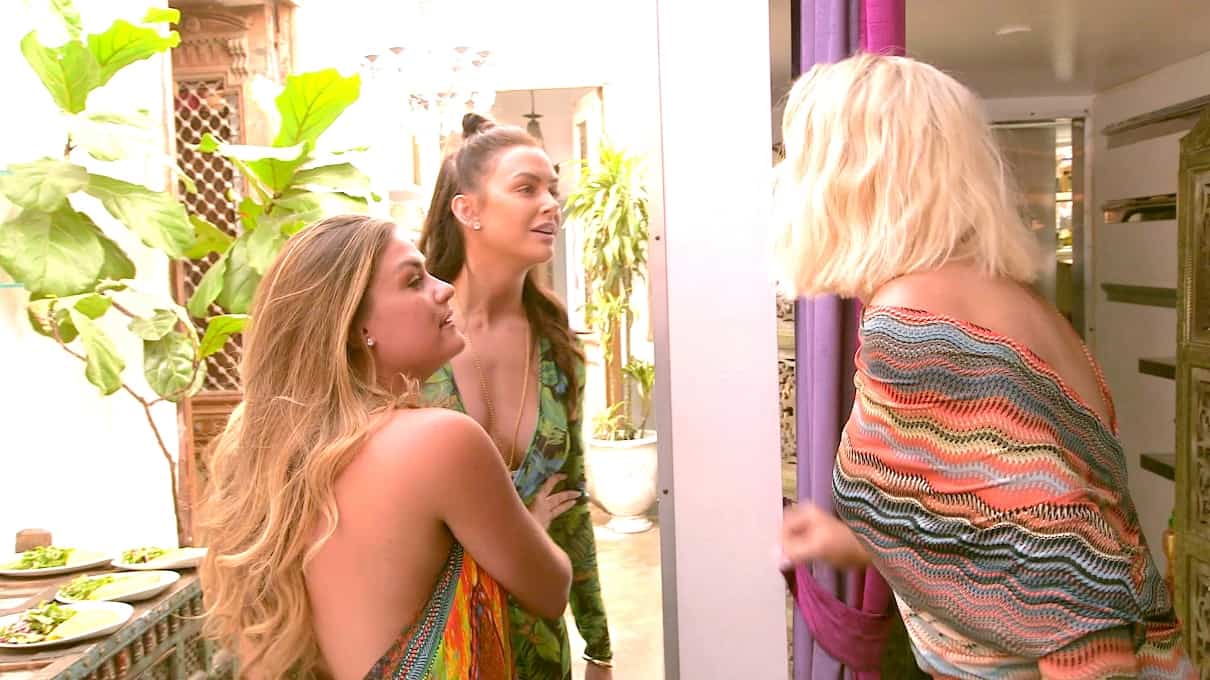 On this episode of Vanderpump Rules, LaLa freaks out on anyone with a pulse. Wait, I thought she got her Gucci slides back from her boo after they made up… now what is the problem??

Post being uninvited to Mexico, James is in a black-out rage. He demands cigarettes, curses up a storm, but LVP brings him back to reality. She reminds him that he hasn’t been a saint this whole time and lets him know that Sandoval has been in James’s corner. Before scampering off, James woefully asks LVP: “Can I please still DJ Billie’s brunch?” LOL. After a bro-hug with Sandoval, James mopes away.

Over at Stassi’s apartment, the hottest new couple, Beau and Stassi, bedazzle a Tito’s bottle for an upcoming dinner at Scheana’s and discuss Stassi’s book. Homegirl is having a bit of writer’s block, so she decides to ask her editor for an extension on her book deadline. She begs for an extra month and miraculously scores that extension. Holler.

Scheana is hosting the witches in Marina Del Ray. Not quite sure why she would actually want to spend time with those girls, but hey, Scheana seems thirsty for approval. No boys are allowed. Except for Adam, Scheana’s NOT boyfriend. Katie hasn’t seen Kristen since the big argument with/about Carter, so she brings her heaping plate of food outside to chat with Kristen about the elephant in the room.

Katie claims Kristen’s boyfriend “is being a d*ck hole” and Kristen can’t seem to defend herself against the wrath of Katie. Kristen attempts to explain that she is in a genuinely happy relationship and just as fast as the argument began, the two b*tches, I mean, witches, make up. Stassi and Scheana join in on the convo and realize all is well between the girls…but now there’s a new issue: Kristen’s invite to the TomTom opening party.

James begrudgingly unpacks his suitcase like a pouting child and he has to break the news to his girlfriend, Raquel, that they are disinvited to Mexico. Raquel is “pissed for” James and acts surprised by this whole ordeal. James believes that Katie is trying to ice James out of the group and Raquel explains that “having the girls exclude” James from the group has “affected” her, too. This basically translates to, because you are a total troll, I am getting zero screen time, so you better shape up.

The next day, Kristen stomps into SUR (inappropriately dressed) and seeks out LVP. She comes in hot as she explains that LVP was the reason she wasn’t allowed to go to the Daily Mail TomTom party. Kristen states that she’s “certainly not going to miss her best friends’ bar opening.” LVP makes it clear that if the boys invited Kristen, then she can go as THEIR guests. Phew- crisis averted.

Brittany brings Jax along to the gastroenterologist. Nothing screams love quite like that, huh? As the doctor pokes and prods on her belly, Jax sits by, ever the supportive fiancé. It turns out that Brittany’s doctor *thinks* she has an ulcer (must be all that worrying about Jax’s fidelity). Brittany is warned to avoid alcohol and spicy food…juuuuust in time for her Mexico trip!

LaLa’s back in the studio, ya’ll. LaLa’s music producers are pretty incredible, particularly the dude rocking the red overalls sans shirt underneath. Ariana and Stassi roll up and LaLa takes a break to talk with her girls. Admittedly, LaLa has been a rage monster since her father’s passing and it seems as though James Kennedy is taking most of the heat. LaLa explains, “Like I wanna drag his skinny British a*s so bad.” Ariana can’t “quite understand” why she is being so vicious towards Raquel and James, but all I know is that I would NOT wanna be on LaLa’s bad side and it’s only a matter of time before she explodes..

It’s time for “Brunch with Billie.” That would explain why Scheana is rocking a boob-baring little number. Duh. AND James is BACK spinning at SUR. It’s his chance to show LVP how “professional” he can be and some people are excited to see James back at it…and by some people, I mean Ariana and Sandoval. They come to show their support, but something dangerous is brewing on the sidelines.

LaLa uses this brunch as an opportunity to talk to Billie Lee. She wishes to figure out where their relationship went wrong and when the girls get some one-on-one time, Billie explains that she is allowed to question LaLa as a person. Obviously, LaLa doesn’t like this, flips the f*ck out, and storms away…ready to pounce on her next victim. (Anyone else notice that Scheana is just back to her old ways? Pushing herself on Adam and not giving the dude ANY space at all. I said it here first: this is not going to end well.)

In the meantime, Sandoval pops over to see DJ James and extends an invite to the TomTom opening party. Whoopsie. Because THAT was a wise decision…however, I think it’s time someone stands up to monster Katie. She doesn’t rule the friend circle, after all.

LaLa is already p*ssed off and we can all see the wheels coming off once LaLa calls Raquel over. LaLa overheard Raquel talking to her friend about LaLa playing the dad card. Ohhhh, snap. And now this is where it really goes down. LaLa, looking to lash out at anyone who crosses her path, shrieks at Raquel, “Yes, I think you have a screw loose.” LaLa is in Raquel’s face, pointing, name calling, the whole nine yards, and Billie tries to kick LaLa out. Instead, LaLa gets ushered to a table by Brittany where Brittany does her best to calm a seething LaLa.

At a different table, Ariana, speaking from experience as she, too, has lost her father, explains that, “Life goes on and people are not going to tip-toe around you just because something really bad has happened.” Good luck telling them to emotional LaLa right now…James makes his way over to LaLa the bully. She scream-talks at him and Brittany just sit there doe-eyed as these two go at it. LaLa is off the rails when she shouts at James that she wants to “peel your face from your skull.” LaLa is out of line and legit losing her mind.

Guys, today’s the day. In the words of Schwartzie, this is like his “professional wedding.” TomTom’s opening in just a few hours. The fellas are sweating and nervous, but they hand over the terms sheet to LVP and it’s official- they are “partners.” Just in the nick of time. They run off to prep as James enters TomTom. James is like pink-eye…he just doesn’t go away. He always comes out of nowhere and is impossible to get rid of. For some reason, he decides today’s the day to meet with LVP at TomTom. He talks about Billie’s brunch and rats LaLa out for her insane behavior.

James tries to stick up for himself, but it seems like he is seriously out of chances this time with LVP. After all of the begging and pleading, James has decided to gracefully bow out of the TomTom opening party invite extended by Sandoval. After all, he doesn’t want to blow his chances of future DJing gigs at SUR with his potentially erratic behavior, now does he?