The Real Housewives of Atlanta Recap: With Friends Like These… 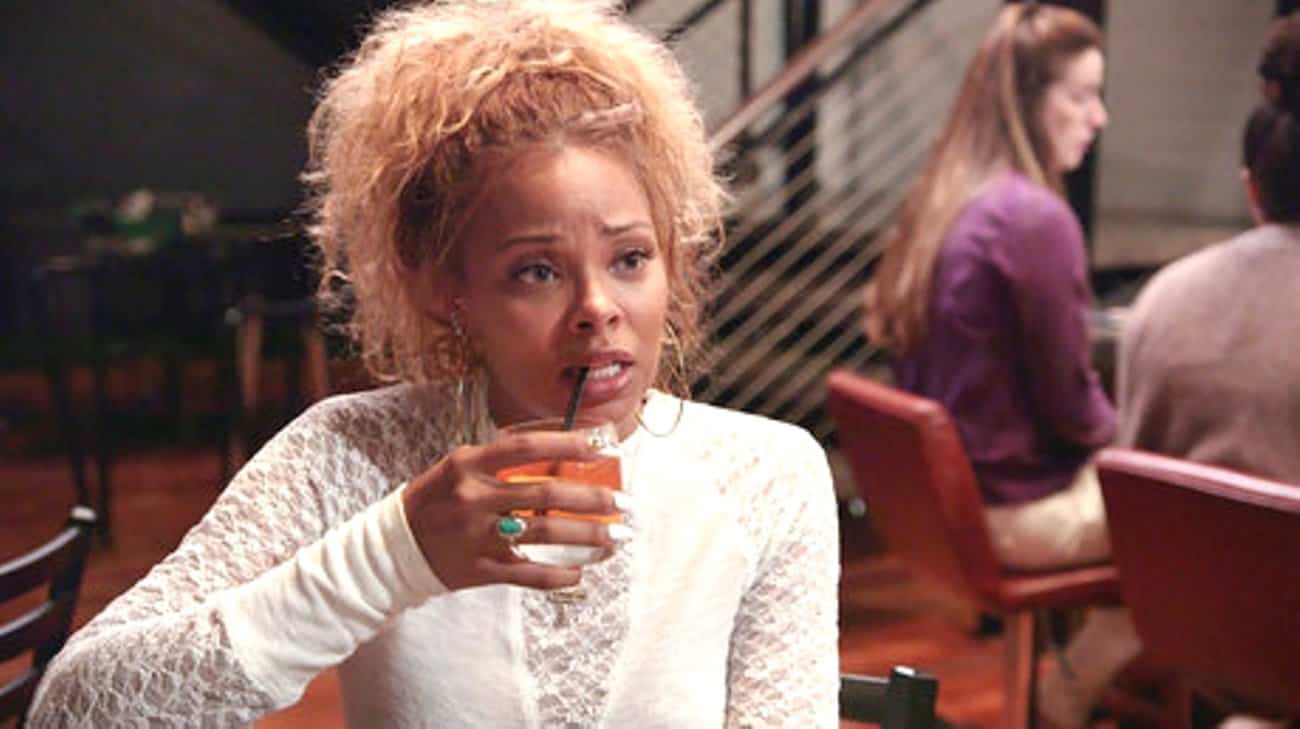 The ladies of The Real Housewives of Atlanta were at it again last night, as Eva returned from her honeymoon, only to face nasty rumors about her financial situation.  Now, it was bad enough that the ladies spent nearly all of Eva’s wedding day talking about NeNe’s many issues, but now they couldn’t even allow the poor girl to get settled into married life, and enjoy the post matrimonial glow before they started in with the tea and apathy. Granted, it wasn’t entirely their fault–sometimes tea just spills right into your lap..

When we picked up with the ladies, Marlo was having NeNe and Tanya over for a girls’ night, and once they settled in with drinks, she let them know that she had information about Eva–from a pretty reliable source–that suggested all wasn’t what it seemed in Eva’s world.  It seemed that one of her bridesmaids had called Marlo, and told her that Eva was in dire straights financially, and, of course, Marlo couldn’t wait to share the news with everyone else.

And NeNe was so thrilled to hear it, she dropped everything.  On her way over to Marlo’s Gregg had called, and asked that she not stay long because he really wasn’t feeling well.  NeNe assured him that she’d just stay “a minute,” but as soon as Marlo announced that tea was being served, she got comfortable, and settled in for the long hall.

Marlo must have wanted to make sure there were no doubts about her story because she actually called the unknown bridesmaid, and asked her to repeat all of her info to the ladies herself–and she was more than happy to oblige.  For starters, the mystery woman said that Eva doesn’t live in the home they all think she does, but actually lives in a “raggedy little house” across from a golf course.  She added that the home they actually visited is in someone else’s names because Eva has bad credit.  She also mentioned that Eva had recently had a car repossessed, and that none of her bridesmaids were speaking to her anymore, although it wasn’t immediately clear why they’d turned on her.  But I will say this, Eva’s probably better off.  With friends like these, who needs enemies?

NeNe and Tanya were shocked at the revelations, and weren’t sure what to believe. After all, they’d both been to Eva’s home, and it was pretty clear that she actually lived there.  Then again, why would this woman make up such an outrageous story out of whole cloth? I mean, it’s easy enough to find out who lives where and who owns what these days.  Marlo even suggested they go full on Real Housewives Potomac, and order a pizza to be delivered to her house to see who would answer the door. I think these ladies are running out of story lines.

Tanya and NeNe did not entertain Marlo’s silly idea, but did agree that Eva should be told that her friend was speaking out of school, and that since NeNe was closest to her, she should be the one to break the news.

In the meantime, Eva had just returned from her honeymoon, and met Kandi for lunch.  She announced that she and Michael would soon be moving–“like, in two days”–to a new rental home, while they worked on renovating the home they wanted to purchase.  Financially savvy Kandi was confused. The plan sounded convoluted, and like a total waste of money.  Why spend the time and money on moving from one rental house to another, while renovating a third house you’re going to purchase? Also, they’d just gotten back from their honeymoon, were just getting settled into married life, and had two young children, so why add that type of stress to their lives?

Well, Eva said it was all because of her daughter’s (sperm)”donor,”  i.e. her ex-boyfriend, whom she says has been stalking her for years.  She said that she’s walked on her balcony to find him standing outside her home watching and waiting, and that such disturbing behavior had forced her to move more than five times over the years.

Sounds scary, right? But Kandi didn’t really seem to buy the story.  She didn’t argue, though, she just sat back and listened in her usual Kandi style, although the look on her face gave her away.  Besides, she had bigger fish to fry–namely preparing for two, well, actually three new additions to the family.  The first was the opening of the second Old Lady Gang restaurant, and the second was the impending arrival of twin girls via a surrogate.  He oldest daughter, Riley, was dubious about the latter.  She told Kandi that she barely had time for her and her baby brother, Ace, let alone two more babies, but Kandi assured her all would be fine.

Eva also told her about the other drama surrounding her wedding–it turns out the day wasn’t all about NeNe, after all.  According to Eva, she had a falling out with one of her bridesmaids, who acted the complete fool throughout the big day, and actually choke her wedding planner.  Eva said it was devastating because this woman had been like a sister to her, and she couldn’t believe that she’d shown out so wantonly on what was supposed to be one of the most important days in Eva’s life.  To make matters worse, Eva said, the woman had gone on to bad mouth her to everyone who would listen, and had turned her other friends against her, as well.  It would seem the mystery of the unknown bridesmaid had been solved.

It was at the opening party for OLG that things would ultimately come to a head with the Eva situation.  From the moment Eva walked into the venue, Tanya was chomping at the bit to tell her what was going on, and as soon as everyone settled in, she asked to speak to Eva alone, and filled her in on everything the bridesmaid had said about her.  Eva was understandably upset, but not really surprised, considering the way her friend had been badmouthing her.  She was, however, disappointed that Marlo and NeNe would have played into it, and given her the platform to spread more rumors, and the minute NeNe walked into the party, Eva grabbed her bag, and told Tanya she was leaving.

The other women were wondering why Eva had left so abruptly, and when Tanya told them there were rumors floating around about Eva, and that she’d warned her about them, NeNe told her she was out of line.  She said they’d agreed that she’d be the one to let Eva know what was going on, and that Tanya should have kept her mouth shut.  Let’s be clear on one thing–NeNe couldn’t care less about Eva, or how she was feeling, or who told her what, she just wanted to be in the middle of the drama.  But when Marlo arrived, she agreed with NeNe, and told Tanya she should have stayed out of it.  By now, the other ladies couldn’t take the suspense any longer, and wanted to know what was happening–now! Not wanting to get yelled at again, Tanya told Marlo to fill them in–and boy did she, adding that Eva’s bridesmaid had also told her that when Eva’s in LA, she’s a “full-blown lesbian.”  Good grief! The bridesmaid never said that on the phone, but I guess Marlo had gotten bored with the financial hardship rumors, and needed something juicier to report.

While Marlo was busy trash talking her “friend,” NeNe was busy playing another game.  She’d called Eva, and convinced her to come back, which Eva agreed to do, but only if she could talk to NeNe alone–with no cameras or microphones.  But this is NeNe–life has no purpose for her with no cameras or microphones, so she stayed mic-ed up, and went outside, and talked to a very distraught Eva, and her husband, Michael, who had shown up after Eva called him crying.  She and Michael explained their “security concerns” and the fact that they had “multiple homes,” some “under aliases” to protect themselves from Eva’s stalker baby daddy.  NeNe told her not to let the haters get to her, and to come back inside and tell her side of the story, which Eva did–it didn’t help the matter in the least.

As Eva explained that her ex always found her, no matter where she moved, Marlo whispered to Kandi that she thought Eva was lying.  After all, she pointed out, Eva was constantly posting her every move on social media. so she must not be that scared of her ex knowing her whereabouts.

I must admit, she had a pretty solid point there.  Kandi simply gave a non-committal shrug, but Marlo spoke up.  She told Eva that she needed to be more careful about who she told her business to, and cautioned her to pay her bills, because the streets of Atlanta were always talking, and if you gave them fodder, they’d run screaming to the hills with it.  Also solid advice.  Question is–will Eva take it?

The show faded to black from there–but the real drama is on its way.  It’s time for another explosive RHOA season finale–and a former housewife is back to bring the pain. Stay tuned!