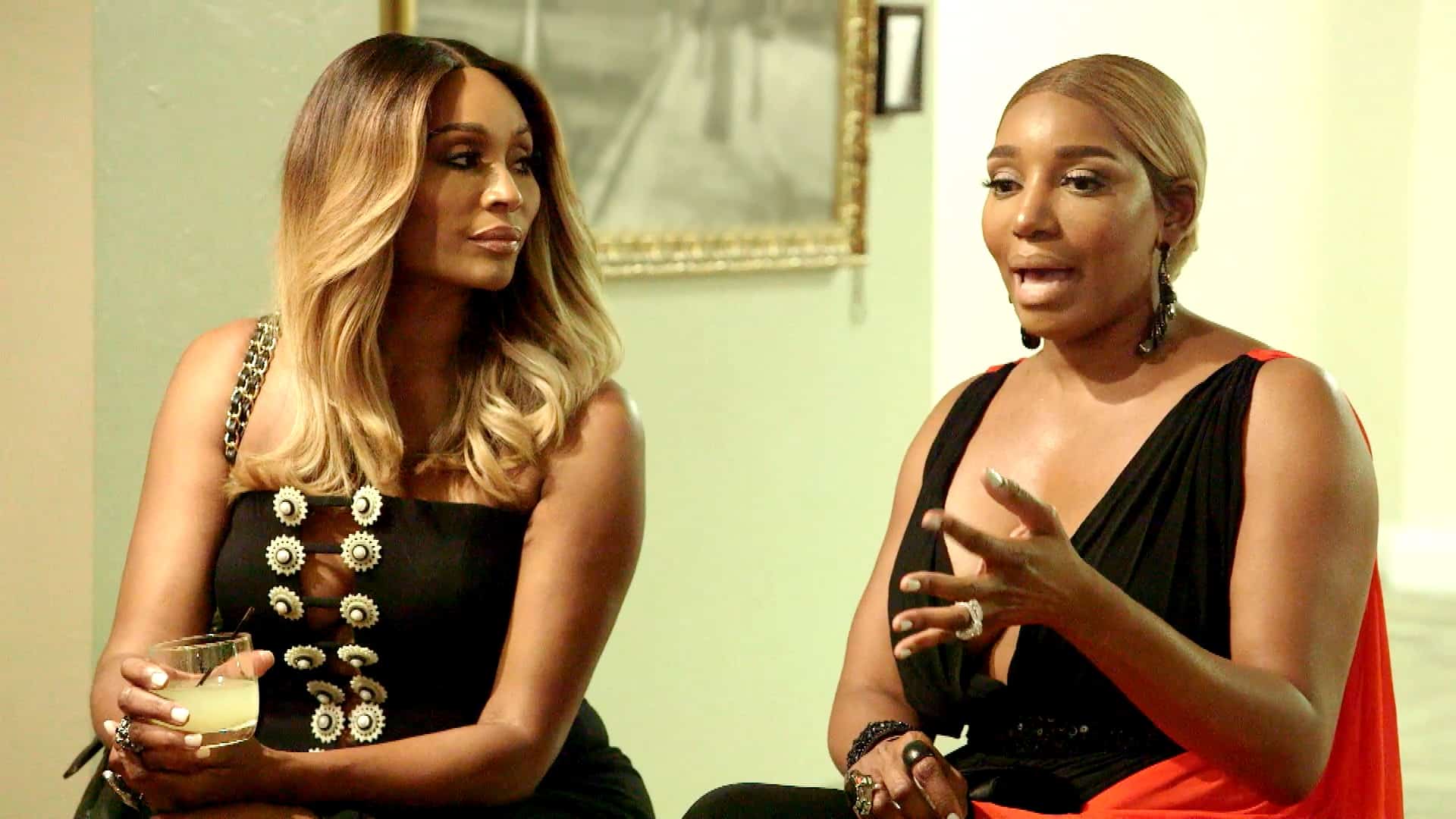 Have you ever had a friend who was so self-centered that even one of the biggest days of your life somehow became about them? Well, the women of The Real Housewives of Atlanta do, and if they ever had questions about the size of NeNe’s ego before, they never will again after last night’s episode.

When we picked up with the ladies last night, they were all preparing for Eva’s wedding, but NeNe was foremost in their thoughts.  The question, though, is why? Are they all so afraid of her wrath that they’re willing to walk on eggshells to appease her at every turn? The simple answer is yes.

It began with Shamari, who showed up at NeNe’s store, Swagg, with a bottle of St. Germaine in hand, to apologize for getting “college freshman wasted” at NeNe “Bye Wig” party a couple of weeks ago, and throwing up in her bathroom.  Granted, it wasn’t a good look for a grown woman, and perhaps an apology was in order, but NeNe’s own behavior was so outrageous that night that it was difficult to watch someone graveling to her, but maybe that’s just me.

Anyway,  Shamari said she hoped that her drunken antics hadn’t ruined the evening, and NeNe explained that the evening had already been on its way to being ruined, and went on to describe in detail the events that took place after Shamari took her early leave.  Not that Shamari hadn’t already heard all about Kandi and Porsha going in NeNe’s closet, and NeNe practically attacking them, and ripping the shirt off of a cameraman to get them out, she just had the good sense to act like it was new information.

NeNe also asked Shamari if Ronnie would mind if she third wheeled with them to Eva’s wedding, as Gregg, who she explained had just gotten out of the hospital the day before, would not be able to attend.  Shamari told her that Ronnie was actually out on tour, and wouldn’t be attending the wedding either, so the two women decided to go together.  But when the big day arrived, NeNe called Shamari to tell her that she and Gregg weren’t “in the best place,” and that she may not be going at all.

This in and of itself was selfish, as Eva had confided in Kandi that her wedding cost $1,000 per person. A sum that stunned Kandi, considering that she had paid much less for her wedding, and she’d had BBD and live lions providing entertainment.

Kandi and Todd rode to the wedding with Cynthia and her new boyfriend, Mike, and NeNe was all they could talk about.  Cynthia, of course, was still defending NeNe’s actions, saying that Kandi and Porsha had invaded her privacy. Now, this may be true, and both women have admitted that they shouldn’t have gone into NeNe’s closet when she asked them not to, but Kandi still believed, and I must agree, that NeNe’s reaction was way over the top.

She also mentioned that Porsha had called “someone who was still at the party,”  though she stopped short of saying who, and had heard NeNe in the background referring to Kandi and Porsha as b***ches, and saying they’d be sorry when they saw her later.  This, of course, had Kandi worried about how NeNe would act once they came face to face at the wedding because apparently NeNe still hadn’t simmered down.

She’d called Kandi just the day before demanding answers because Marlo had gone running to her with a play by play of the conversation she’d had with Kandi and Porsha over lunch, and had clearly made things sound a lot more negative than they really had been.  The good news is that NeNe managed to put all of that aside for the sake of the wedding, and Kandi was relieved when she greeted her with air kisses.  The bad news is it only lasted for about five minutes.  After all, NeNe gets bored quickly when someone else is the center of attention.

Eva made an absolutely stunning bride, and it was clear that both she and her groom, Michael, were happy and full of love, as they openly and unabashedly cried tears of joy as they exchanged their vows. Throughout the ceremony, everyone looked on happily–except for NeNe, who was clearly becoming more and more agitated, until she finally just got up, and walked out, just as Eva and Michael were being introduced as Mr. and Mrs. Sterling for the first time.  Of course, this resulted in everyone’s attention turning toward NeNe, as she dramatically made her way to the restroom.

Shamari found NeNe first, and asked about a tweet she’d sent out asking if it was “normal” for people to be “mean” when they’re sick.  So, yes, we’re still on that.  Gregg’s illness is a major inconvenience to NeNe–probably because it’s more about Gregg than her–and she simply does not care for his negative attitude.  She’s been whining about it for weeks.  The Twitterverse must be as tired of hearing her complain as I am, because most of her followers went off on her, saying she lacked empathy and patience. It was clear that NeNe did not like having this brought to her attention, and Shamari wisely suggested that they change the subject.

In the meantime, Kandi was telling Porsha about the call she’d gotten from NeNe, and when Marlo came to sit beside them, they both questioned her about exactly what she’d told NeNe to get her all riled up again.  Marlo tried to clean it up, but it was clear that she’d been trying to stir the pot.  Big shock, right? Finally, Marlo got up, and said she was going to get NeNe so they could clear the air with her directly.

Across the room, Cynthia was checking on NeNe and was shocked to hear her say that she and Gregg may be heading toward separate lives.  Ugh! NeNe is downright insufferable.  I mean is she really incapable of keeping all this to herself until literally any other time?! Eva had just gotten married–and was spending 1,000 bucks a head on them, and she can’t let her have this one day?!

And then came the richest part of all–after all this drama, when Marlo came to get NeNe to take her to talk to Porsha and Kandi, she actually had the audacity to be shocked and annoyed that they would want to conduct such a conversation at someone’s wedding.  Nevertheless, NeNe, Cynthia, Marlo, Kandi, and Porsha sit down to discuss closet gate, and NeNe tells them that she’s not about to sit there and listen to them tell her how she should have reacted when they were the ones who had disrespected her home, much like it had been disrespected by Kim Zociak, and her daughter, Brielle, last season, when Brielle took video of roaches crawling around in NeNe’s bathroom, and Kim had shared the video, not only with the other women, but the world at large via social media.  Yes, we are back on that again. And Kim’s not even on the show anymore!

NeNe also denied calling Kandi and Porsha b**ches to whomever she was talking to at the party, and when Porsha said NeNe’s behavior had been just plain wrong, NeNe turned from denial to deflection. She told Kandi and Porsha that they had no idea what she had been going through, and accused them of not being there for her.  She said it would be nice for them to ‘show her some love,’ especially since she’d been big enough to show Porsha love while she was “acting a damn fool,” referring to Porsha’s many physical scuffles over the years.  But even that was hypocritical, as Porsha recalled that when NeNe had lectured her about “putting her hands on” people, it hadn’t been the physicality that NeNe disapproved of, but rather the fact that Porsha had been inept enough to let it happen on camera.

As Porsha and Kandi tried to further explain how they felt, NeNe resorted to tears.  She said they should just support her–period.  They immediately rushed to her side, hugging her and practically genuflecting at her feet, as they apologized.  Someone actually even remembered that they were at Eva’s wedding, and said they couldn’t wait to hear NeNe’s toast, but NeNe said that “after all of this” she couldn’t possibly make the toast she’d promised Eva she’d make.  Unbelievable!

As they emerged from the room, Shamari was waiting outside for NeNe, and loudly proclaimed that she loved her and was there for her.  Needless to say, she was drunk.  Kandi tried to calm her down, but things only went from bad to worse, when Shamari was introduced to Eva’s mom, and loudly announced to the whole table that Eva had come out of the woman’s vagina.  You can’t take these women anywhere.

Uh Oh–attention was starting to shift away from NeNe, and we couldn’t have that, so, of course, she managed to pull herself together long enough to make the toast, which miraculously went off without a hitch.

Poor Eva–she actually thought the day was about her.  But guess what? Next week’s episode is all about her because she’ll return from her honeymoon to rumors that her finances are in sire straights. Stay tuned!