The Real Housewives of Atlanta Recap: Welcome to the Dungeon 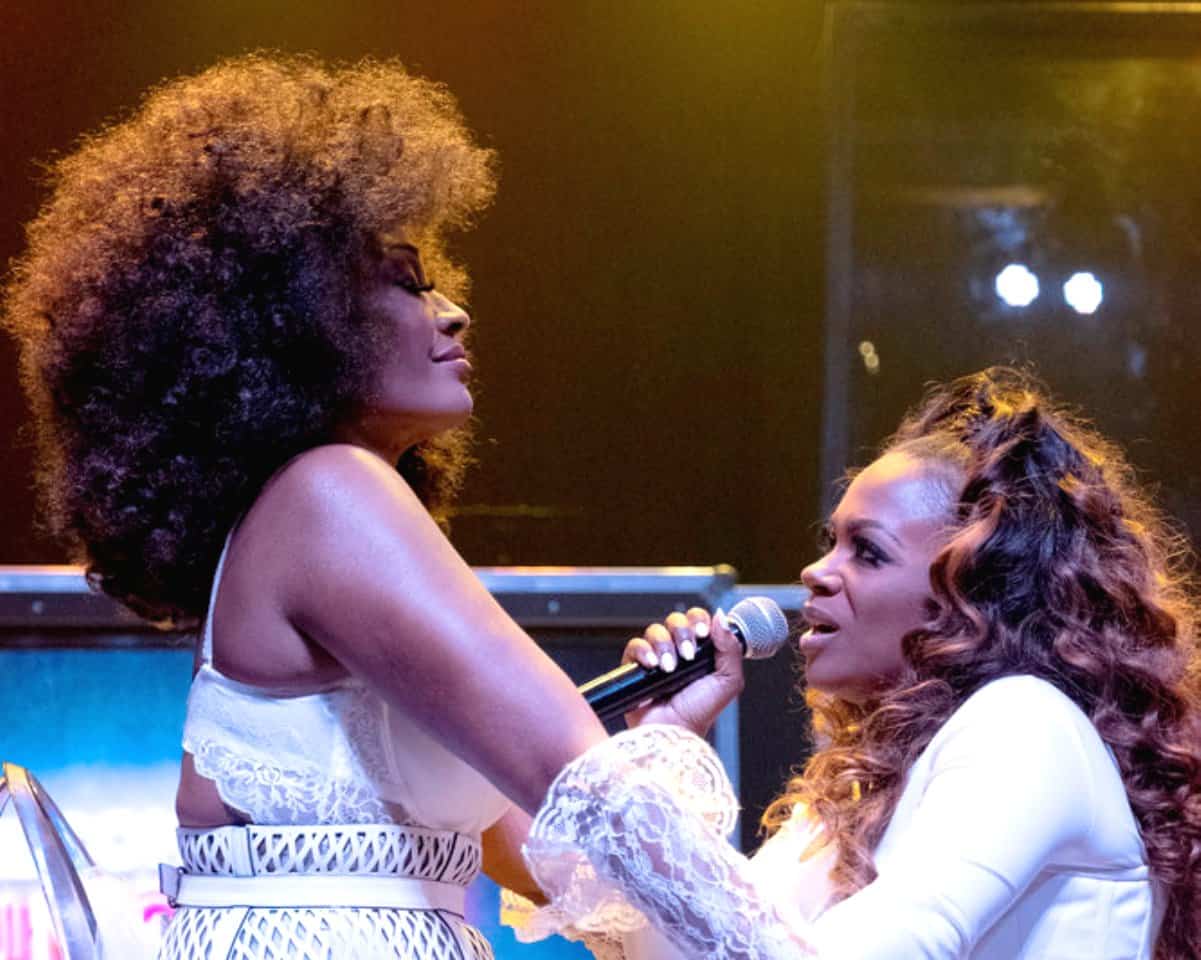 The ladies of The Real Housewives of Atlanta returned last night, and while you’d think that after last week’s drama, they’d continue to bring the heat, you’d be wrong.  It was actually one of the more boring episodes of the season, despite the fact that we were treated to a literal sex show, in the form of Kandi’s Dungeon-themed burlesque show.

When we picked up with the peaches, it was two days after NeNe’s “Bye Wigs” party, and the ladies were still stunned. Marlo, Porsha, and Kandi met for lunch and a post mortem, and none of them could quite understand how things had gone so horribly wrong.  I mean, it was supposed to be a party, and it had ended in a melee.  The question, of course, was why.

On the other side of town, Tanya and Eva filled Shamari in on the details of the night, including the fact that she’d become aggressively handsy with both of them.  Shamari was shocked to hear of her own behavior (she’d been drunk, after all), but it had paled in comparison to NeNe’s.

Now, Tanya and Eva mainly took NeNe’s side, pointing out that she’d asked Kandi and Porsha several times to stay out of her closet, but they’d gone in anyway, and when you poke the bear, you can’t get mad when it reacts, right?

Well, that depends on who you ask.  Kandi and Porsha both said that they’d thought it was all for fun, and had been flabbergasted by NeNe’s over-the-top reaction.  Marlo agreed, and pointed out that NeNe had clearly been out of sorts the entire day.  After all, her attitude started when Marlo had shown up to her house unannounced the day before, which she’d only done because she knew NeNe was upset about Gregg being admitted to the hospital for a blood clot.  Marlo also added that she’d stayed behind after the others had gone home, but that NeNe had seamlessly slipped into yet another personality by then, and had been fine.

Kandi mentioned that she had texted NeNe, and that they’d had a pleasant enough exchange.  This upset Porsha because she and Kandi had agreed that they’d figure out together how to deal with NeNe going forward, and she felt that Kandi had covered her own behind, and left hers out in the wind.  But Porsha quickly moved to fix that, and texted her own apology to NeNe.  She said that NeNe responded quickly with her own apology, and that things seemed fine to her, but only time would tell.  She didn’t intend to see NeNe until they all attended Eva’s wedding, and she just hoped that all the drama wouldn’t find its way into the big day.

But here’s the thing: Since NeNe grabbed the cameraman like a linebacker clotheslining an unsuspecting wide receiver, we never did see what happened in that closet, and apparently it got pretty wild.  Something happened with Porsha’s belt, but Porsha refused to elaborate, saying that if she said any more, her relationship with NeNe would never be the same.

My question is, why does she care?! NeNe acted like a fool–and a psychotic one at that, and it wasn’t the first time, so who cares what she thinks?! Especially if she ripped Porsha’s belt off and attempted to whip her with it, or something.  Now, I’m not saying that’s what happened, and we’ll probably never know for sure, but hey, when you attack the cameraman and refuse to let the audience see what’s happening, and all they’re left with is the sound of Porsha screaming, “stop it, I’m pregnant,” you run the risk of people’s imaginations running wild.

NeNe was still the hottest topic in town when Cynthia and Eva went to have colonics together (who knew they’d gotten so close?).  Cynthia, always NeNe’s biggest supporter, was full of justifications for her besties behavior, saying that Porsha and Kandi should not have gone into NeNe’s closet after she’d told them that it wasn’t fit for company.  She said she wasn’t sure whether the threat of millions of viewers seeing the closet in a messy state had been the thing that set her off, or the straw that broke the camel’s back. But enough about that closet.  It’s literally the dumbest storyline yet, and that’s saying something.

Later, Shamari fessed up to her husband, Ronnie, about her flirtatious behavior at the party, although she said it ‘wasn’t sexual.’ Well, if that wasn’t sexual, I don’t know what is, but either way, he was remarkably understanding.  He did, however, warn her that drinking so much could lead to compromising situations.  Shamari agreed, and said she’d be ‘watching herself’ in the future because she didn’t want to do anything that would embarrass either one of them or their family.  Ronnie said he’d definitely be ‘watching’ her too, which is probably a pretty wise decision.

Later, it was time for Kandi’s burlesque show.  The ladies showed up in full force, although NeNe and Porsha were conspicuously absent.  According to Cynthia, NeNe was in Miami checking on her store, and Porsha didn’t come because it would have been painfully awkward.  After all, the idea of the dungeon theme came from Porsha’s rumors and innuendos about Kandi and Todd having a “sex dungeon” in their basement that they used to seduce their unwitting prey, including Porsha, whom they’d supposedly planned to “drug and rape.”  Until the closet debacle, it was the most ridiculous storyline RHOA had ever had.

On the big night, Shamari came down with laryngitis, and had no voice.  Luckily, Kandi is nothing if not a consummate professional, and she’d already pre-recorded Shamari’s song, so the whole performance went off without a hitch.  Cynthia also participated, but again, her stiffness made the raunchy lap dance Kandi gave her more awkward than sexy.

The only hint of drama came after the show, when Marlo told Shamari, apropos of absolutely nothing, that she felt that she had a serious drinking problem.  Luckily for Marlo, Shamari didn’t have a voice, and could do nothing but sit there smiling and nodding, as Marlo spoke.

So, that’s all folks..a whole hour and not much happened, but that’s sure to change next week, when the ladies finally come face to face again with NeNe at Eva’s wedding.  But she wouldn’t bring her drama there and make the whole day about herself,  would she? HAHAHA..of course she would! Stay tuned.