Real Housewives of Atlanta Recap: NeNe Gets Violent with Cameraman and Goes After Castmates 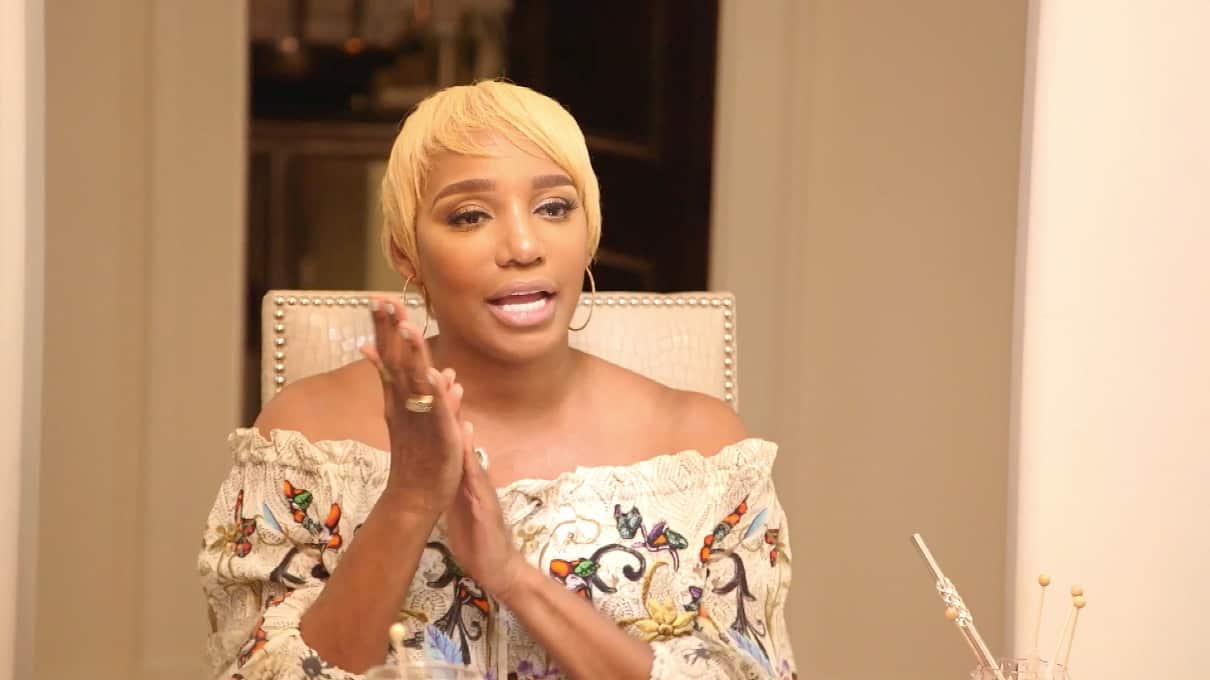 The ladies of The Real Housewives of Atlanta returned last night, and viewers, I must report that they’ve completely lost their minds.  I don’t even quite know what all went on last night, but by the time the hour was over, we’d seen a burlesque lap dance, barfing, and a brawl.  Needless to say, it was—a lot.

When we picked up with the ladies, Kandi was working on her new burlesque show, The Dungeon.  She was holding auditions for the performers, and Cynthia turned up to take her shot.  She brought Kandi up on the stage, and gave her a lap dance that was well–just uncomfortable.  Don’t get me wrong, Cynthia’s a beautiful woman.  There’s no question of that. She’s just not sexy.  And she really, really can’t dance.  Plus, she and Kandi are good friends.  It was just painful to watch, and I’m begging her to never, ever, under any circumstances, subject us to anything like it again.

Later, NeNe announced that she was inviting everyone over for a “Bye Wigs” party.  What even is that, you ask? Well, apparently, it’s a dinner party where everyone wears their natural hair.  That means no wigs, no extensions, no weaves, and nothing sewn in, clipped on, or taped up to their own hair. No easy feat for our beloved peaches.  Weave is life to these women.  And now, I’m sure you’re all wondering at the point of such a soiree, am I right? Well, I can’t help you there, other than the fact that NeNe likes throwing theme parties and making strange demands of her friends.

Now, if you ask me, all of the ladies actually looked better with their own hair.  But, apparently when they took off their wigs and undid their weaves, all of their good sense went with it.  Especially NeNe’s.  Yes, viewers, we must talk about NeNe.

Okay–NeNe’s been under a great deal of stress this season.  Her husband Gregg has been battling cancer, and seeing someone you love go through that is never easy. And going through all of it in front of the cameras must make it ten times harder, but surely Bravo offers some sort of Family Medical Leave, and if they do, NeNe needs to take it.  The woman is slowly, but surely losing all control of herself.

First of all, NeNe was late to her own party, leaving her friends downstairs in the living room,  wondering why the hell they’d gone through all the trouble of getting fake hair removed from their heads just to come over to NeNe’s and eat crab legs.  When she finally did deign to come downstairs, she reprimanded Cynthia for “cheating.”  She’d taken out the hair extensions, but she’d used black scrunchies to add volume to the Princess Leia style side buns she was trying and failing to pull off, and apparently, that was in direct violation of NeNe’s Bye Wig regulations.

NeNe also announced to the ladies that Gregg had suffered another set back on his road to recovery, and had been hospitalized due to a blood clot, which is potentially quite serious, and begs the question: why the hell are you throwing a “bye wig” party now?! Or ever? But I digress. Only Cynthia and Marlo had known about Gregg being hospitalized ahead of the party, and NeNe was becoming noticeably agitated about the fact that Marlo was running late.  Okay, now admittedly, “running late” is an understatement.  Both she and Porsha were more than three hours late, but in their defense, undoing 20 pounds of weave is a fairly arduous process and it takes time.  Besides that, was NeNe really acting like being on time is something she makes a priority.  After all, she had just been tardy for her own party, (sorry, i couldn’t help myself) and her inability to be prompt had caused plenty of trouble during their chaotic trip to Tokyo.

As she complained about them being disrespectful to their hostess, NeNe also shared the fact that she had another reason to be angry at Marlo.  After Gregg had texted her to say that NeNe was mid-meltdown following his health scare, Marlo decided to show up at NeNe’s to check on her.  Now, usually, I’m no Marlo fan, and correct me if I’m wrong, but isn’t that what a good friend does when they hear their girl is in trouble?  But apparently, Marlo didn’t rush to NeNe’s side in an acceptable way.  NeNe was angry because she showed up unannounced, and was ringing the bell, saying, in her usual Marlo way, “open the door, b***h.” For better, or for worse, they call each other that all the time, and it’s usually not a problem, but evidently NeNe hadn’t been in a playful mood on that particular day.

When Marlo finally did arrive, and heard NeNe complaining about her, she tried to defend herself, saying that she’d only been worried about her friend.  After all, she’d gotten several texts from Gregg saying that NeNe was in a bad way. Furthermore, she explained, she’d been late to the party because she’d left her hair appointment to be at NeNe’s side, and had to wait on “stand-by” to get her weave removed on the day of the party instead.  Just what did NeNe expect, anyway?! All valid points, but NeNe was in no mood to be reasonable.  She burst into tears, and continued chastising Marlo, who eventually had enough, and said she was just going home.

Cynthia, Porsha, Kandi, and even NeNe’s son, Brett, went to Marlo, and begged her to stay, explaining that NeNe really hadn’t meant any harm, and was just stressed out and worried about her husband.  Marlo quickly softened, and returned to the table to join her friends, but NeNe’s mood didn’t improve.  After they hugged, NeNe was too distraught to continue with the party, so she excused herself to go upstairs, and pull herself together.  It would have been the perfect time for the other ladies to politely take their leave, but well,  the drinks were flowing, and I don’t think anyone would accuse these ladies of being socially astute.

While NeNe cried upstairs, her guests enjoyed the accommodations, and got a little bit frisky.  As we all know (whether we really wanted to, or not) Shamari has a thing for the ladies, and she’s not shy–especially after a few of whatever NeNe was serving up in those cups.  She was particularly interested in Eva, and before long began feeling her up.  Eva laughed it off, but made it pretty clear that she wasn’t interested in any hanky panky.  But Shamari was on a mission, so she quickly moved on to Tanya, boldly grabbing her crotch.  Tanya also laughed it off.  Shamari had obviously been over served, and really, who doesn’t molest their friends after a few drinks?!

After a while, Shamari quietly excused herself, and Eva, being a good friend went to check on her in the restroom.  But no good deed goes unpunished, and Shamari had gone from flirty to downright sick, and proceeded to throw up all over Eva! It was a mess.  Now, this would definitely have been the perfect time for the ladies take their leave, but some people just never learn.

While Shamari was cleaning herself up in the restroom, Cynthia and Marlo had gone to check on NeNe, and soon the entire party moved up to her bedroom.  Kandi, being the brains of the RHOA operation said that she was going to head home, but said that before she did, she wanted to have a look at NeNe’s famous closet.  Porsha said she’d like to have a look, as well.  And why not? NeNe was always bragging about it, right? But NeNe said her closet was not in good shape at the moment, and asked them to stay out, but feeling playful, they walked in anyway, and began poking around.

Instead they poked the bear, because NeNe went ballistic, and started screaming for them to get out of the closet, before grabbing one of the camera men by the back of the shirt to move him out of the way, so she could rush in and stop them.  A scuffle ensued, during which there was quite a bit of yelling, particularly by Porsha, who could be heard reminding NeNe that she was pregnant.  Of course, we viewers didn’t see this scuffle, since NeNe had tossed the camera man aside like a linebacker, but suffice to say, things got out of hand. 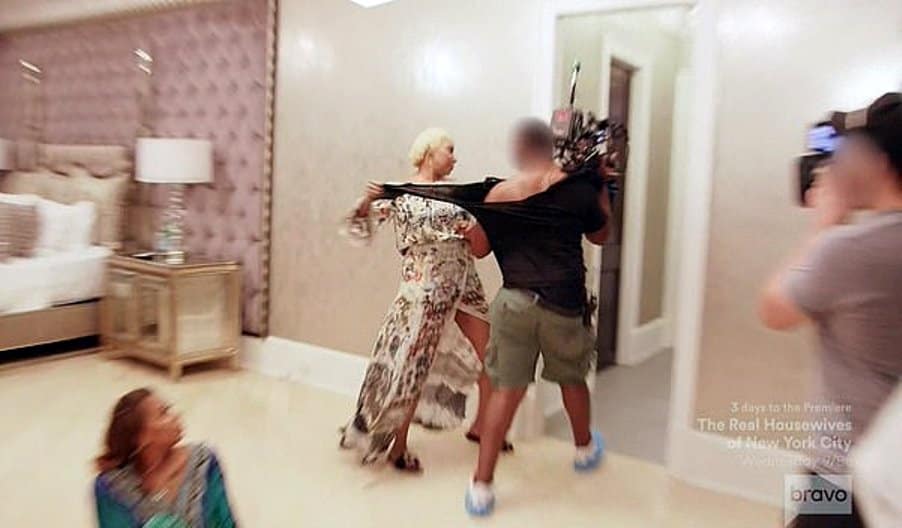 Well, there you have it viewers, NeNe has lost complete control of herself, and all over a few late guests, a friend trying to offer her comfort during a difficult time, and an unannounced tour of her famous closet.  The rest of this season promises to be pretty dramatic–stay tuned!

TELL US – THOUGHTS ON THE RHOA EPISODE & NENE’S BEHAVIOR?