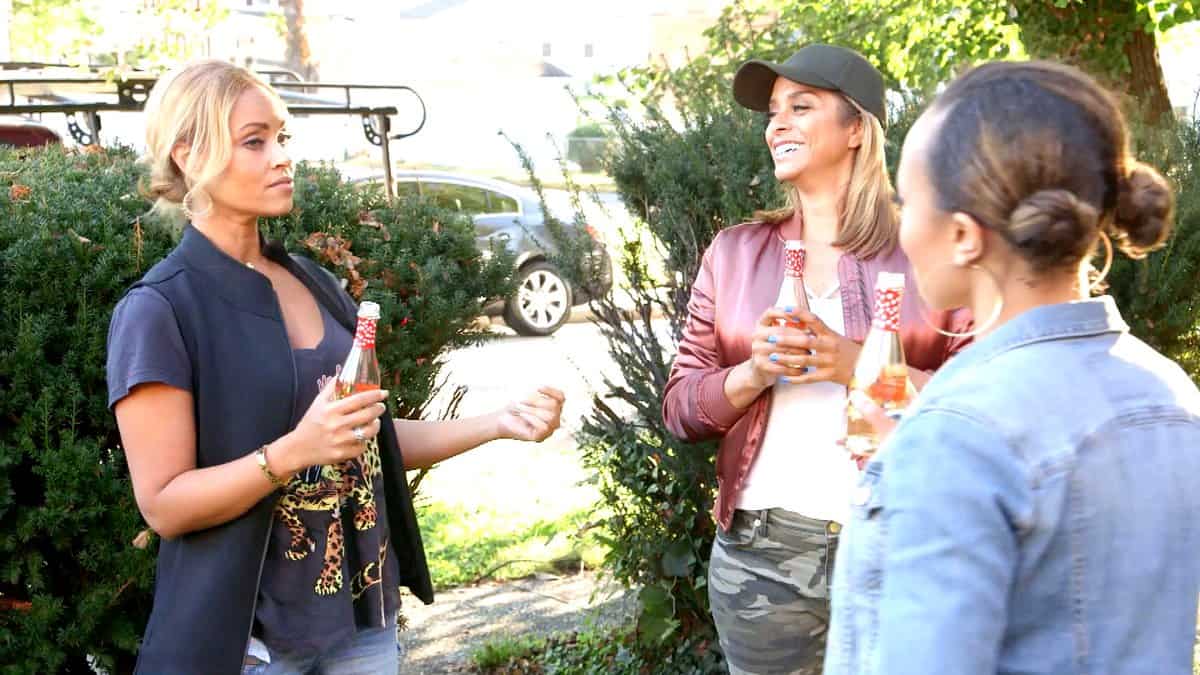 The women of The Real Housewives of Potomac are just flat out messy..and each in her own special way. But last night, they truly took it to a whole new level.

Let’s start with Gizelle, shall we? She has become absolutely obsessed with Karen.  Its downright creepy, really.  She wants to know all about her tax issues, where she lives, and the state of her marriage. Gizelle claims to want Karen to spill all that tea so that she can be a “true friend,” and offer her support, but said she “needs to know what she’s supporting first.”

In the meantime, she’s perfectly happy to trash Karen to any and everyone, including Kal, her friend/hairdresser.  She met him for lunch, and filled him in on all the rumors that had been swirling around about Karen living in an apartment, rather than the 10,000 square foot palace she and her husband, Ray, moved into in Great Falls.

Here’s a question: why does she care?! It’s Karen’s life. Let the woman live, and stop hounding her! This  idea that Karen somehow owes her friends an explanation for every choice she makes is truly baffling.

And Ashley is no better. She’s equally invested in Karen’s personal life, and has spent the entire season trying to “crack her code,” which is just Ashley speak for ‘get all up in her business.’  This is especially rich because it’s not as though Ashley doesn’t have her own problems to worry about.

While she has constantly tried to sniff out the issues in Karen’s marriage, Ashley has only recently reunited with her own husband, Michael, after months of being separated, and they have a pretty serious issue of their own…she wants to start a family, and he doesn’t.  For Ashley, this is a dealbreaker, and when she talked about it with her mother last night, she told her she really wasn’t sure how much longer she could “teeter on the edge of maybe,” and wondered if she was “wasting her time.”

But that wasn’t all she told her mother, because aside from being nosy, Ashley also has an enormous mouth! Seriously, no one can say anything to her, without it being repeated. So, of course, she told her mother all about the argument she had with Michael a few episodes back, during which he told her that he was hesitating about having children because he didn’t want Ashley to raise their children in the same “irresponsible” way her mother had raised her.

And why would she repeat such a hurtful thing to her mother? Because she wants Michael and her mother to “start again from a sturdy foundation of truth,” which is Ashley speak for ‘I can’t keep my mouth shut.’ Of course, her mother became upset, and pointed out that, unlike Michael,  she had a great relationship with her adult children. She also agreed with Ashley’s uncle’s earlier assessment of  Michael: he just wants a sexy, young trophy wife, and has no intentions of having a family with her.  It was pretty brutal, but Ashley brought it on herself with all of her oversharing.

This brings us to Robyn, who is also determined to get to the bottom of what’s happening with Karen. Again, why does she care? I haven’t the slightest idea. Oh wait, yes I do. Because Gizelle does, and, for the life of her, Robyn just can’t seem to formulate her own thoughts or opinions this season. Instead, she thinks, feels, acts, walks, and talks exactly like Gizelle.

But what of the Grande Dame, herself? She’s not without her flaws. She can get a little squirrely about answering basic questions, and her story often changes depending on the audience.  She’s even got her friend/assistant/driver/fixer/press agent, Matt doing it.  When they met for lunch, she told him that he’d been a “hot topic” among the ladies during their trip to France, and that Ashley had said he’d been the one spreading rumors about Karen’s current living situation.

Matt laughed it off, and denied saying any such thing.  He said that the only thing he’d ever told  Ashley was that Karen and Ray had still been living in his bachelor pad when he’d met them.  Karen laughed it off, as well, and agreed that she and Matt had known each other for a very long time..24 or 25 years.  But here’s the thing: in previous footage showed during last night’s episode, Matt clearly stated that he’d only known Karen for 12 years.

That’s a pretty big discrepancy.  And just how old is Matt, anyway?! He only looks about 30 years old to me, so depending on which number you believe, he was practically a child when he started doing Karen’s bidding. Either way, this is exactly the type of thing that makes it difficult for Karen’s friends to take her at her word.

Only Monique and Candiace cut Karen any slack, and that’s mainly because they’re so busy sucking up to her.  But Karen finds their brown nosing delightful, and feels they’re like a “breath of fresh air,” after dealing with Ashley, Robyn, and Gizelle. Although, breath of fresh air may be a little generous. Candiace, the newest member of the RHOP crew may just be the messiest of all!

She complains that everyone calls her a “princess,” but she obviously embraces the role.  She constantly complains about not getting everything she wants for her upcoming wedding, and pouts any time her fiancee, Chris, or her mother, who happens to be paying for it, tell her to pump the breaks.

She wants to be more independent, and to that end, she is planning to open a brick and mortar store for her wig line, along with her sister, Crystal, who she described as “the Solange to her Beyonce.” Good grief! I’m going to reserve comment here because  I was taught that if I couldn’t find something nice to say, I shouldn’t say anything at all, but you should know that it’s KILLING me! Beyonce…omg!

When Candiace,  Monique, and Karen got together, they told Candiace that she should really put more energy toward her relationship than her wedding, and pointed out that she talked about the plans for the big day far more than she spoke about her intended.  They weren’t wrong, and she knew it, so she said that she would try to concentrate on what was truly important.  They had a nice afternoon–no bickering, no shade, no backstabbing. So, there was no way for Karen to know what was in store for her later.

After working for about 5 minutes on Robyn’s investment property (and since they weren’t exactly dressed for heavy labor), Robyn,  Ashley, and Gizelle decided to leave the grunt work to the professionals, and stepped outside to sip some champagne.  Of course, the conversation quickly turned to Karen, and they devised a plan to find out the truth about where she was living once and for all!

They donned wigs, fake mustaches, and disguises, and headed to the Huger’s house in Great Falls to deliver a pizza.  It was, perhaps, the world’s dumbest plan, and only a fool would have believed that their cheap, party store costumes were real, but they  figured this was the best way to see if Ray and Karen were really living there.  They couldn’t stop giggling as they drove up, and Ashley was convinced that, if nothing else, Karen would find the humor in the situation, as well.  Somehow, I doubt that.

Unfortunately, the show faded to black just as Robyn, dressed as a pizza delivery man, rang the doorbell, so we’ll have to wait until next week’s action drama packed season finale (yes, time flies when you’re having fun) to find out how it all shakes out. Stay tuned!

TELL US – THOUGHTS ON THE LATEST RHOP EPISODE? DID GIZELLE, ROBYN & ASHLEY CROSS THE LINE? IS KAREN DISHONEST ABOUT HER LIFE?