The Real Housewives of New York Recap: Dorinda Kicks Barbara Out of Her Home and Sonja Makes Out with an Anonymous Woman 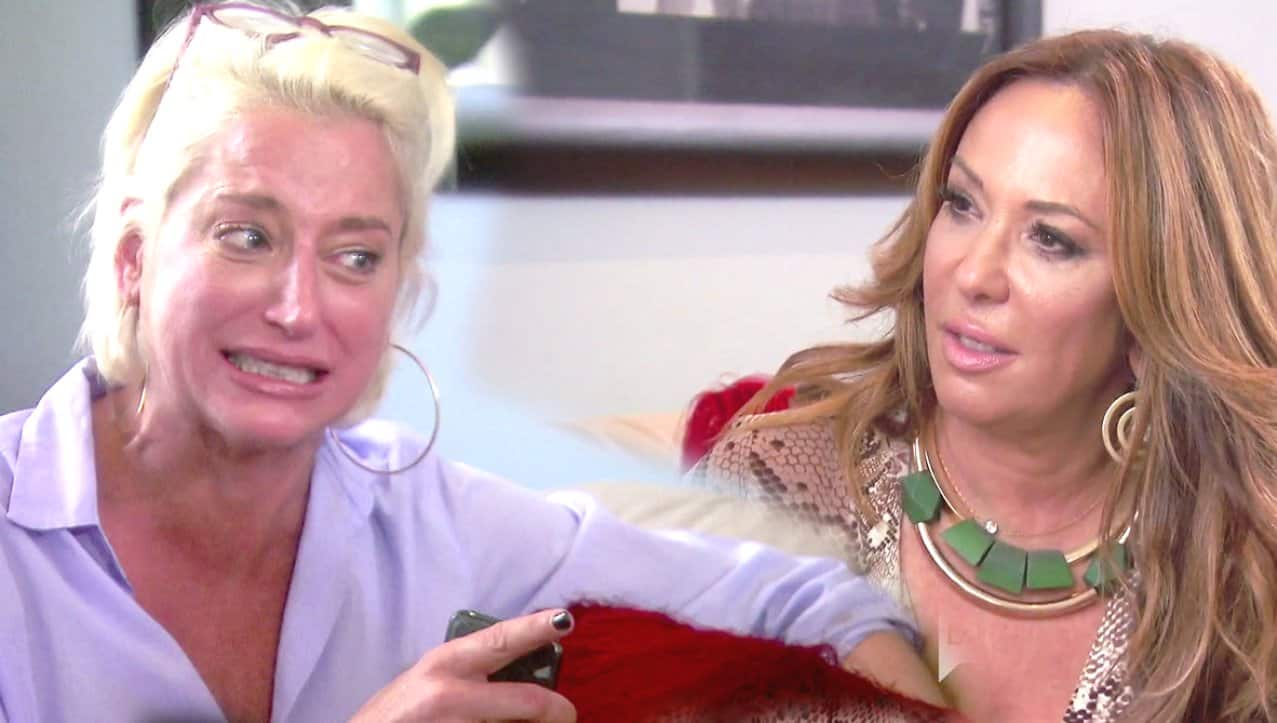 The ladies of The Real Housewives of New York were back at it last night, and it may not seem possible, but I just have to say it…after 11 seasons of fighting, drinking, and backstabbing, they may have run out of things to do in NYC.  Seriously, these ladies are carrying on with the same old issues, and it’s getting–well, old.

When we picked up with the ladies, they were at Sonja’s party to unveil her Paper Magazine cover, and Dorinda had just gotten up the nerve to go over to Luann, and attempt a conversation–it didn’t go well.  Don’t get me wrong, Luann was cordial, but when the woman who used to be your best friend greets you in a way that anyone would describe as cordial, you know the friendship is kaput.  I mean yell, throw a drink at me, get up and walk away even, but casually greeting me like I’m someone who happens to stand in the same Starbucks line every morning?! That would be more than I could take!

The two women asked after each other’s children, and when Dorinda suggested they talk, Luann said it simply wasn’t the time, and then she did get up and walk away.  Bethenny, who’d watched the whole exchange felt like Luann was taking things a bit far, and was concerned that if they two women didn’t make amends soon, they never would.

Even Ramona seemed to get a warmer reception than Dorinda. As she was leaving the party, she came over to say her goodbyes, and leaned over to kiss Bethenny, and offer her condolences.  It was short and sweet, but it was genuine.  Bethenny thanked her, and later said that she really appreciated Ramona keeping it simple.

Ramona also shared air kisses with Luann, who greeted her much more warmly than she had with Dorinda.  They exchanged compliments about how great each other looked, and laughed together lightheartedly, and just as she had with Bethenny, Ramona finally exercised some good judgement, and quit while she was ahead, and left the party.  She had good reason too–a date with a man her friend Tori had set her up with.

With all that kissing going on, Sonja must have felt left out, and when a woman (no one seemed to know who she was–a fan? a friend?) yelled over from across the room that she wanted to kiss Sonja.  And boy did she! She made her way over, and when Sonja went in for a chaste kiss on the cheek, the woman said she wanted a kiss on the lips, and the two proceeded to make out furiously.  The other women watched in utter shock, but Sonja certainly didn’t seem to mind, and even kissed the unknown woman a second time.  But just as quickly as the make-out session started, it was over, and the woman simply walked away as though nothing had happened.   Bethenny certainly hit the nail on the head when she called it a “drive-by lesbian moment.” Sonja’s a mess! Not to mention the best part of the show this season.  Never change, girl!!

Ramona wasn’t nearly as lucky on her date.  The guy was just odd.  He offered to tell the story of how he was conceived, ordered wine based on the fact that it came from a vineyard in a region whose soccer team he liked, and proceeded on to a twenty-minute diatribe on how he didn’t believe in monogamy.  It was awkward to say the least, and Ramona was clearly turned off.

Later, Tinsley had drinks with her mother, who was visiting–again.  I must say, if I were Tinsley, I’d be asking her to keep her trips to New York to a minimum.  All she does is harp on her daughter about her ticking biological clock, and make her feel bad about not being married and having a family.  And this time she chose a pretty painful tact in which to do it.  She wore a pair of shoes designed by Tinsley’s ex-husband’s new wife, and then went on to talk about how their new baby was the most beautiful child she’d ever seen.  The fun continued later, when mother and daughter met Sonja for lunch, and she got in on the act, telling Tinsley that her boyfriend, Scott should be chasing her, and not the other way around.  But Tinsley’s happy with Scott, and while she wants children and marriage with him, she’s well aware of the fact that she’s 43, and unmarried, and really doesn’t need these two to remind her.

Across town, Luann started her community service detail at a soup kitchen, and it was clear that slinging hash isn’t the countess’ strong suit.  She double dipped, she spilled–she even tasted.  It was a hot, soupy mess, but our girl is doing what she has to do, so more power to her.  She even met with her hard-nosed probation officer, who scared the countess straight in a hurry!

Now, one of the steps to sobriety is making amends, but since Luann had little interest in working towards that with Dorinda, Bethenny took matters into her own hands, and brokered a ‘gangster-style’ sit down between the two women, hoping beyond hope that one of them would apologize, and stop all the nonsense.  No such luck.  Dorinda arrived first, inexplicably dressed in an Adidas sweatshirt with peek-a-boo shoulder cutouts, and pink hair! I have no idea what she was thinking–apparently, it was her idea of a “gangster” look.

Barbara was invited along for some reason too, and she decided to cosplay, as well, donning a fedora.  It was all a bit much, and it turns out they got all dolled up for nothing because the sit down was a bust, and nothing got resolved.  Dorinda refused to admit she’d been heckling Luann at her cabaret show last season when she repeatedly yelled “Jovianni,” referencing the fact that she’d arranged for her fashion designer friend to provide Luann’s cabaret gowns, and Luann refused to admit that she’d done anything wrong too.  They’re both children, but perhaps they’re better off without each other.  With friends like that, who needs enemies, am I right?  The two former friends left it at wishing each other well, and left the lunch in the same state they arrived in.

Dorinda continued to refuse to take responsibility when Barbara came over to her apartment to discuss renovations.  Now, Barbara probably shouldn’t have even brought Luann up, and it really isn’t any of her business, but since she did, Dorinda launched right back into her justifications.  She said that she’d been nothing but a good friend to Luann–had helped her get sober, taken her to meetings, church, the whole nine yards, only to have her friend drop her like a hot potato.  Barbara pointed out that she’d been pretty nasty to Luann during her trip, and that she’d even talked about the lawsuit her children brought against her with the other ladies, waving court documents around to bolster her point–not exactly supportive friend behavior.

Dorinda denied having done any such thing, and in fact, threw Sonja under the bus, saying that she’d been the one who was waiving court documents around, and talking about the lawsuit.  But this is reality television,  and past unseen footage revealed that she had done exactly what she was being accused of. Although she was being honest about not literally waving papers around, she did have the documents on her phone, and was waiving it around, telling the other ladies that Luann deserved this lawsuit her children her bringing against her. Busted!! While Barbara didn’t have the benefit of seeing the footage, she made it clear that she didn’t believe Dorinda, who accused her of “drinking the kool-aid,” and asked her to leave, which Barbara did with pleasure. Yikes!

Well, viewers, the show faded to black from there, but the ladies will be back next week with plenty more drama where this came from. Stay tuned!