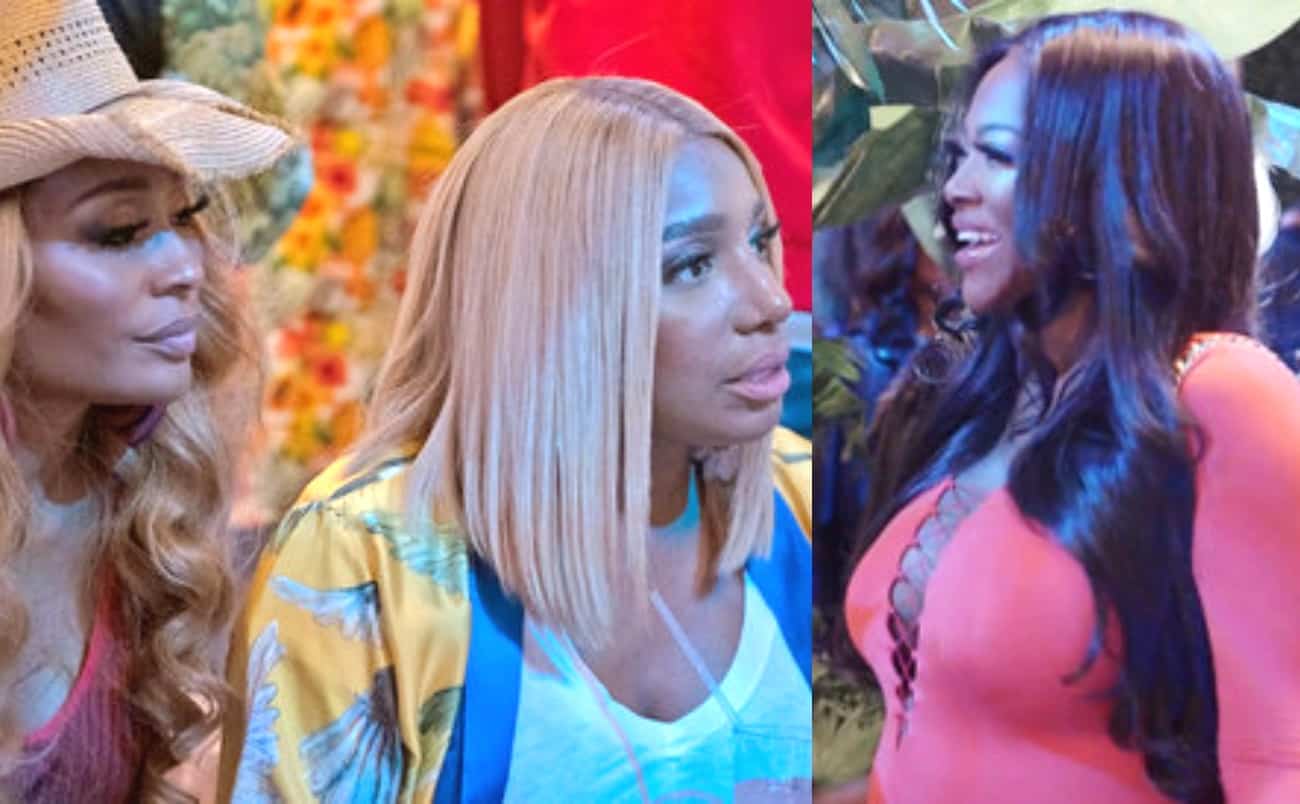 Well, another season of The Real Housewives of Atlanta came to a close with last night’s season finale, and while there was plenty of drama, it was all completely unnecessary, and it was all about NeNe.  I’m really gonna need her to get her life together–and fast.

When we picked up with the ladies, NeNe was having drinks at her store, Swagg with a very blonde Marlo, and explaining how angry she was with her former castmate, Kenya Moore.  Why, you ask? Well, for the dumbest possible reason, of course.  Apparently, some fans on social media asked Kenya to play a game of “Call, Text, Delete,” with Andy Cohen, Porsha, and NeNe as the subjects, and Kenya said she’d call Andy, text Porsha, and delete NeNe.  That’s literally it.  The fact that NeNe felt some kind of way about it was just proof positive that she has way too much time on her hands for nonsense.

At pretty much the exact same time, Cynthia and Kandi were having lunch across town, and Cynthia was expressing her disappointment that her two close friends weren’t getting along.  You see, she was planning a launch party for her new signature collaboration with Seagram’s, and really wanted all of her friends to be on hand to help her celebrate.

She added that she had no idea why they were beefing, and was surprised that NeNe wasn’t invited to Kenya’s baby shower, and even more surprised when NeNe reacted with snide comments about all of the pictures on social media.  She said that she’d been aware that Kenya felt NeNe hadn’t been supportive of her pregnancy, and that NeNe felt Kenya hadn’t been supportive of her throughout Gregg’s illness, waiting longer than anyone to reach out to ask about him, but she really hadn’t known it was all that serious.

She told Kandi that she really hoped the women could put there B.S. aside for her sake.  Poor Cynthia! Is she new to this game or just dense? These women–NeNe, in particular–are completely incapable of largess.

But before Cynthia launch party, there was another big party for the ladies to attend–Porsha’s gender reveal party.  She and her baby daddy, Dennis, spared no expense when throwing the carnival-themed celebration, but it was a mess. No tent, no albino lions, a late fire breather, and the whole event was still in the process of being set up when the guests began arriving.  It wasn’t a good look, and pregnant, hormonal Porsha burst into tears the minute she arrived.  But the ladies were there to console her–well, most of them anyway.

Kandi and NeNe both agreed that Porsha wasn’t supportive of the other women’s events, so they weren’t going to bend over backward to go to hers.  It was understandable, I suppose.  I mean, fair is fair.  But in Porsha’s defense, the events she didn’t attend for the other women were mostly business related, and this was different.  This was an event to celebrate her first child, so it seemed a bit petty that Kandi and NeNe would beg off.  I wasn’t at all surprised that NeNe would be so small about it, but Kandi’s usually better than that.  Having said all that, she and Porsha have had issues for years, so maybe it was for the best.  At least she sent a gift.

Once Porsha got over her disappointment at the lack of organization of the party, and agreed with Dennis that they would “make the best of it,”  it was revealed that the couple would be having a baby girl.  Porsha was thrilled at the prospect of having a “real live mini me” (I’m going to be nice here, and say nothing) and everyone toasted the newest member of the RHOA family.  Cynthia’s boyfriend, Mike was especially festive.  So much so that he may have proposed! Just before the pink confetti started flying, he asked Cynthia if they could get married next year.  Cynthia seemed pretty perceptive, so who knows? Personally, I smell a set up for next season’s big story, but what do I know.

Later, it was time for Cynthia’s party, and it was much more organized than Porsha’s had been.  One other thing it had that Porsha’s lacked was NeNe (lucky her).  Shortly after the festivities began, a blast from the past came twirling in! Everyone seemed thrilled to see Kenya, who arrived in a skin-tight pink dress that showed off her growing baby bump.  NeNe simply stared her down and remarked, “Oh, I think a monster’s here.”

NeNe continued making snide remarks about Kenya, but never spoke directly to her. Instead, she explained to Marlo and Porsha, who were sitting on either side of her, that she thought it was total “bulls***” that Cynthia would invite Kenya without telling her.  She only became angrier when Cynthia got up on stage to welcome everyone, and Kenya joined her, and made a toast about how proud she was of her friend.

NeNe said she was done, and was ready to leave the party, but that would have meant that she wouldn’t be the center of attention, so she stayed for a few more minutes.  Cynthia then gave Gregg a shoutout, and tried to thank him for coming, and make a toast to his improving health, but before Gregg could step forward to accept the acknowledgment, NeNe told him to stay put, leaving Cynthia standing at the microphone looking foolish.

Cynthia could tell NeNe was angry–she wasn’t exactly trying to hide it, after all—but felt that since it was her night, the least her friends could do was put their differences aside and support her.  The other ladies managed.  Kenya and Porsha even did a joint limbo, laughing together, as they tried to get their pregnant bellies under the limbo stick–and they nearly ripped each other’s weaves out a few season’s back!

Kenya was more than willing to be cordial to NeNe, too, despite the thinly veiled shade and side eye NeNe had been serving her all evening.  As she left, Kenya said goodnight to NeNe, and told Gregg it was great to see him looking so healthy, and saying he had been in her prayers.  NeNe slapped on the fakest of smiles, and thanked Kenya, but the moment she turned her back, she stage whispered to Kandi that Kenya looked like she was going to give birth to a “buffalo.”  It was childish and unnecessary.

It became even more childish when NeNe met Cynthia, Kenya, and Tanya for drinks a few days later.  She confronted Cynthia, and said she felt she’d been distant lately, and that she wasn’t as good a friend as she once was, and furthermore, wasn’t as good a friend to her as she was to her “other friend” (she meant Kenya in case anyone missed it) because she ‘wasn’t neutral.’  NeNe pointed out that Cynthia had once told everyone that she wouldn’t listen to any negative talk about Kenya, but as far as she knew, Cynthia hadn’t defended her honor when it came to the things Kenya said about her.

Cynthia wanted to know if this was really all about the “Call, Text, Delete” comment on social media, because she thought that was silly, and added that she didn’t play the social media game like they did.

But NeNe was undeterred by reason.  She launched into a whole diatribe about how wrong it had been for Cynthia not to warn her that Kenya would be at her party.  Cynthia said that she honestly hadn’t known that Kenya would be there, and that, in fact, she hadn’t expected her to come.  But still, Kenya was her friend, and she didn’t see why it should be a problem to invite her.

NeNe said that she was Cynthia’s “sister,”  and as such, should have been warned that her nemesis would be present.  Cynthia said she really didn’t think it was that big of a deal, and really thought they should have been mature enough to be in the same room to celebrate her for one night.

This wasn’t going the way NeNe had planned.  Cynthia wasn’t on her knees begging for forgiveness, so naturally, NeNe started crying, and left the table, and naturally, Cynthia went chasing after her.

When Cynthia caught up with her, NeNe said that she felt like she was losing Cynthia as a friend, and explained that it was very hurtful, particularly in light of all that she was going through with Gregg.  Of course, once someone brings up their husband having a serious illness, there’s not much of a comeback, so Cynthia simply apologized, and told NeNe that she loved her and was there for her always.  What else could she say, am I right? But during her interview, Cynthia said that the fact that Gregg had been ill was really all the more reason for NeNe to stop worrying about petty nonsense, and concentrate on what was important.  During her own interview, NeNe said she was finally seeing Cynthia in a new light, and it was “dim.” Good grief!

Well, viewers, the season may be over, but the drama is just getting started.  Part one of the reunion airs next week, and it looks like NeNe’s in the hot seat. Stay tuned!!

TELL US – THOUGHTS ON THE LATEST SEASON FINALE EPISODE? DO YOU THINK NENE IS OVERREACTING?