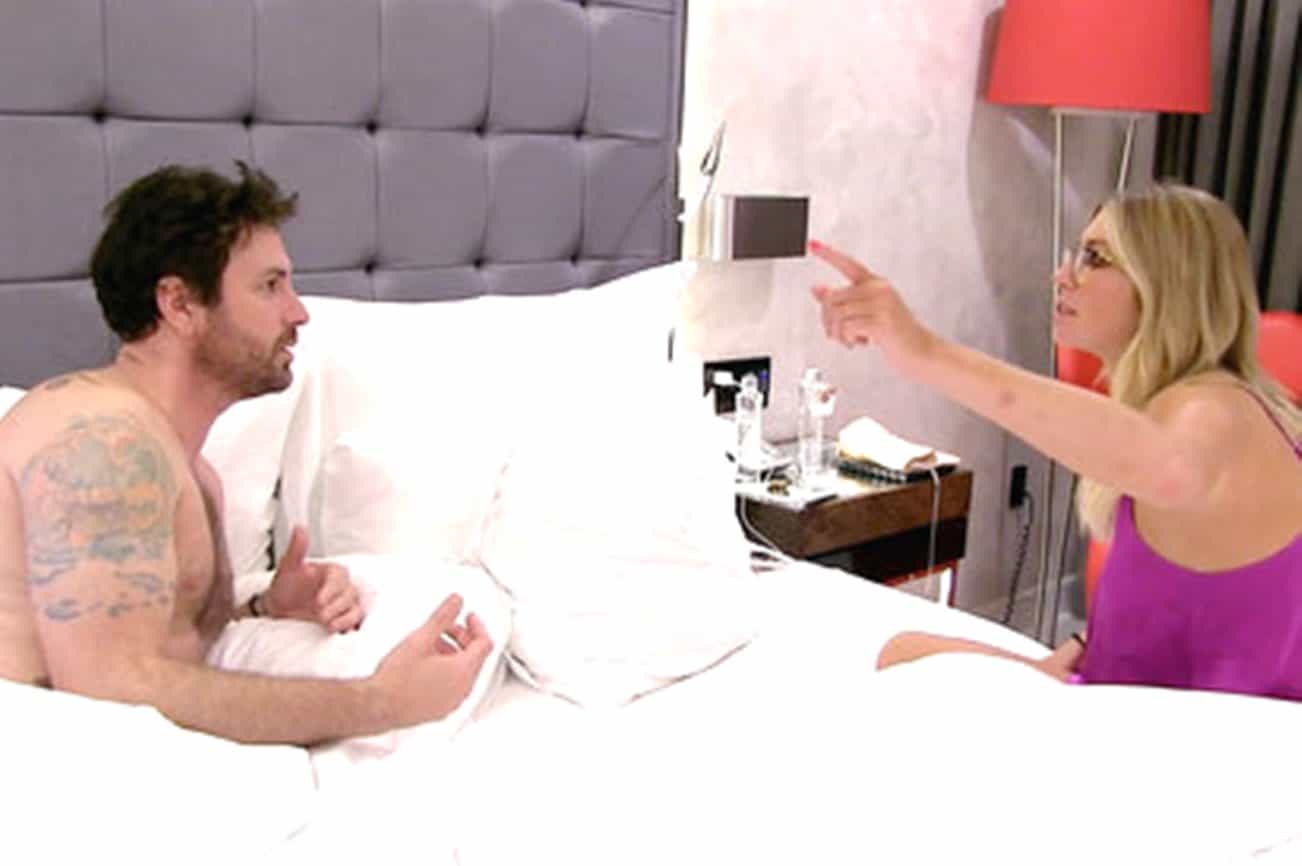 Ah, on this episode of Vanderpump Rules I didn’t realize we were watching couples therapy on VH1. Katie and Schwartzie are still at each other’s throats. They fight aggressively and loudly enough for everyone in a 5-mile radius to hear their issues, which include the little tidbit that Schwartzie doesn’t like the sound of Katie’s voice. Schwartzie isn’t quite sure about what to do with his troll of a wife, so he cracks open a beer, and tells Katie to “get prepared to be injected with love.” Ew.

Back at SUR, LVP is holding down the fort since her entire “staff” is whooping it up in Mexico. She gets a phone call from Sandoval who brags about how “spectacular” the hotel room is (cuz I am SURE LVP will be jumping on a plane to try out that resort) and he reminds LVP how to run TomTom, ya know, since this is her first rodeo.

“This is going to be a freak-out-free vaca.” We all heard her say it, folks…let’s just pray that Kristen actually stays true to her word. The gang is getting acquainted with the resort and even LaLa’s loosening up a bit. “Momma hasn’t been lit in a while.” That, is apparently, LaLa’s answer to sobriety. It seems like we are in for a real treat with tonight’s dinner.

Brittany is clearly not heeding her doctor’s advice and throws back tequila shots just like her old self and Stassi requests a girls’ skinny-dipping night. Nothing is more random than when Sandoval makes a toast thanking everyone for coming as if he is accepting an award on behalf of TomTom. But Kristen steals the spotlight when she, too, makes a toast. Uh, what? Who invited this chick on the trip? Kristen declares that she will be drinking in moderation LOL and while she sits in dumb awe at one end of the table, #pillowgate gets brought up by Jax and Stassi…that would be last year’s Cabo trip.

Jax is at it again…stirring up the nasty rumor that James and Kristen hooked up last year by the jacuzzi. Sidenote: Katie looks like a washed-up figure skater in her dinner ensemble.
Ariana decides that she wants to grab a drink at the bar with LaLa. Her intention is to address LaLa’s recent outbursts stemming from the death of her father. LaLa realizes that her behavior has been rude lately, but she’s not sorry. I can’t believe someone is actually standing up to LaLa. Ariana gets teary talking about her grieving process and begs LaLa to seek her out whenever she starts seeing red.

Later, back at the hotel, Stassi is whining. “I don’t want to go skinny dipping anymore.” And like clockwork… Stassi begins picking a fight with her boyfriend, Beau. Stassi refers to Beau as “Mr. FOMO,” and I am unclear why they have to do everything together. Once the girls head down to the beach late-night, the guys discuss their severe disease, FOMO. The ad the fellas do in order to explain FOMO is hilarious, so I am guessing Sandoval was not the brains behind the production operation.

The next morning, the hungover group heads out to go ATVing through what looks like the jungle. Sandoval explains: “I got my gear, I got goggles, I got my leg knife.” OMG. How does Ariana deal with him?! The ATV ride is exciting, but alas, no leg knife was needed. All I know is that it’s a good thing that Sandoval has his water shoes on. Incredible. Somehow Jax and Stassi wind up in the water together. After Jax tries to prank Stassi by telling her he still has feelings for her (which may/may not be true…and based on his track record, you can never tell when Jason, er I mean, Jax is telling the truth). He proceeds to feed Stassi nuggets of relationship advice, since he loves Beau and doesn’t want Stassi to ef it up, like she always does. “Pick and choose your battles. Absence makes the heart grow fonder.” Damn. Who is this guy and what have you done to Jax?

Is Kristen extra annoying this episode? As she sits in the room with Scheana and LaLa sucking down her cocktail through a baby bottle, Scheana spills about the recent gossip. Kristen is p*ssed that Jax is bringing up the James pillow debacle, as it is soooo last year and not even true… according to Kristen.

It’s club night in Mexico. Evidently, it’s a white party theme and everyone is donning their best glow in the dark ensemble. The group is raving and ripping shots, but leave it to Kristen to ruin the vibe. She pulls Jax aside and questions him and his gossiping. Jax does a great job backpedaling and an exhausted Kristen declares: “I’m so tired of everyone just looking at me like crazy Kristen.” Well, here’s an idea…Stop. Acting. CRAZY.

The night wears on and the wheels are falling off left and right. Scheana is p*ssed that Adam didn’t like the picture she sent to him. She insists that a simple “fire emoji” or “double tap heart” would have been sufficient. Dead.

As LaLa bribes the DJ to play her hot beatz, the girls head up to the upper level and shake their bonbons…everyone except Stassi. When asked why by Beau, Stassi begins her dark passenger spiral and insists on leaving the club. You know what that means…Beau has to come with her cuz he can’t have fun without Stassi. DUH.

Somehow, TomTom is still standing, despite the fact that Sandoval and Schwartzie are out of town. God bless LVP in her apron showing the chefs exactly what she wants. Is there anything this woman can’t do? To assist in their partying, LVP shoots the guys a text showing them the line to get into the restaurant. The Toms are over the moon.

“We’ve built it and they have come.” Um, Schwartzie, I think you can thank LVP for the success…not you and your bonehead partner with the leg knife… Nevertheless, they use this as a reason to rage further and the rest of the night is merely a blur.

OMG drunk Ariana is my favorite character on this show. While she makes drunk snow angels in the lobby, Stassi laments making Beau leave early with her. She feels like Beau acts “like he’s my prisoner.” A very drunk and emotional Beau states that he feels “battered” by Stassi. WOAH. Beau. What I have learned from this episode is that you shouldn’t drink and be filmed…I mean, drink and discuss important relationship woes.

I am still unclear about Stassi’s position, though. Why is it bullsh*t that her boyfriend wants to still go out and party if she wants to go home? I am confused about why Stassi is “not going to go to sleep alone.” Seems like she is going to be one tired boyfriend captor if that’s the case cuz chances of taming Beau seem pretty slim. The poor guy begins to get emo on Stassi and he tells her that he “worships” her. WHYYYYYYYYY.

My goodness. Talk about a plot twist. LaLa had a pretty scary and major panic attack in the cab ride back to the hotel from the club. It doesn’t seem like she is as affected as I am after watching the footage of that event because the next thing you know, she’s naked in the hot tub and Schwartzie is taking drink orders for her, Katie, and Ariana.

All is well in LaLa land. As Katie and LaLa lounge in the nude, Ariana attempts to advise the ladies in her very own gibberish. Ariana for the win. I am not even sure what the hell she is saying, but I love every minute of it. In the meantime, Stassi and Beau are having cryfest 2k19 and I can’t deal with their drama. BRING BACK ARIANA. BRING BACK THE FUN.