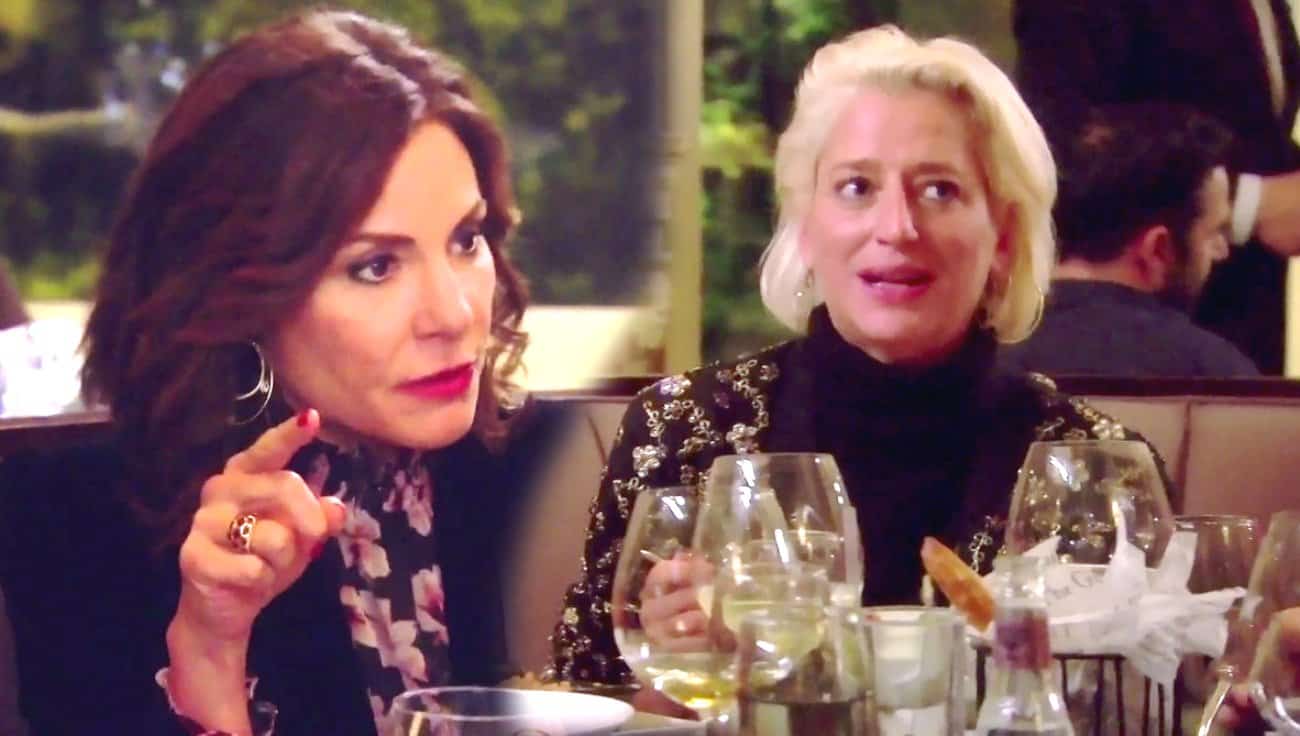 Ok, so the thing about this season of The Real Housewives of New York is that it’s almost impossible to decide which of the women is more annoying. Usually it’s Ramona, but for some reason, the other ladies are giving her a run for her money this time around. It’s like they just aren’t really sure about what to do with themselves. I think they have too much time on their hands.

Let’s start with Tinsley, who kicked off  last night’s episode with Botox injections to “relieve jaw stress.” Jaw stress–have you ever?! What in the world does Tinsley have to be stressed about?! She lives in the penthouse suite of one of the most expensive hotels in one of the most expensive cities in the world! She should be ashamed to say she’s stressed! But apparently, she clenches her jaw when she’s ruminating on–oh, I don’t know, what to order from room service, I guess? And, of course, there’s her mother. Why is she always there? Now that I think about it, I’m starting to understand the jaw clenching.

The other source of stress in Tinsley’s life is Scott, her long-suffering boyfriend, who lives in Chicago, which, according to Tinsley, is the only problem in their relationship.  But he has a business to run in the Windy City, and she has her “brand” in the Big Apple, so they’re stuck at dating, despite the fact that Tinsley is desperate to get married again and have children.

When the ladies enjoyed lunch and drinks aboard Ramona’s friend’s yacht later in the day, they all wanted to know exactly what Tinsley and Scott were waiting for. Tinsley said things were moving along really well for them, and that Scott had even shown her pictures of the engagement ring. Wow! Pictures of an engagement ring?! Who does that? It’s like some sort of sick joke. He knows exactly what Tinsley wants, and yet he keeps it at arms length.  It’s cruel, really, and the ladies tried to convince Tinsley that she deserved much better. It was the first and last thing I’ve agreed with all season.

Tinsley felt put on the spot, and as if her relationship were “on the chopping block,” but surely, she must’ve known deep down that they were right.  Bethenny asked if she thought Scott would “bolt” if she just laid it all on the line and issued an ultimatum–marriage or bust. Tinsley said she didn’t believe that he would “respond well to threats,” but added that she had a time frame in her head, and that if Scott didn’t put one of those rings on her finger soon, she’d have to call it quits.

But really, who is Bethenny to be doling out relationship advice? She’s embarking on a new romance just weeks after the death of her ‘great love,’ Dennis.  She felt guilty about it, and was concerned about “projecting” her feelings about Dennis onto the “gentleman” who was courting her, so she sought the advice of a grief counselor. And she revealed something shocking. She said that the Saturday before Dennis died, she’d decided that she needed to “extricate” herself from the “dynamic” of their relationship.

You see, Dennis knew that she wanted a commitment and a family unit for her daughter, Brynn, and he wasn’t willing to do that.  At the same time, she said, she felt “tremendous pressure” that kept her from “getting off the ride” because Dennis had told her that if it didn’t work out between them, he’d be alone for the rest of his life, and it made her feel guilty.

All of this makes sense, except for one thing: didn’t Bethenny just reveal to her friends that she and Dennis had gotten engaged right before he died? What the hell was she talking about?! Was she lying then, or lying now? Or was their relationship really just so messed up that she didn’t know whether she was coming or going? Who knows? Suffice to say, Bethenny doesn’t. In the end, the grief counselor encouraged her to find love again, and said that it was really a wonderful way of “honoring” Dennis.

This brings us to the never-ending saga of Luann and Dorinda, who’d invited the ladies to spend the Halloween weekend at her place in the Berkshires. Yes, folks, we’re doing that again. Some people just never learn. Or they’re insane, and repeat the same behavior over and over again, expecting a different result. I’m not sure which it is anymore.

Anyway, Luann and Dorinda, were finally in a decent place, following the sit-down Bethenny had orchestrated between them last week. They even managed to greet each other warmly at Tinsley’s fashion show.  And really, how could they not? Doggy fashion shows just have a way of bringing out the very best in people, am I right? I know I can’t stay angry when I attend one. Dorinda hoped that the goodwill between them would continue during the Berkshires trip. She was thrilled that Luann would be coming, and hopeful that with the opportunity to relax and enjoy themselves, they might actually get their friendship back on track.  LOL!

Let’s just say it wasn’t in the cards for them.  And, for once, it wasn’t Dorinda’s mouth that was to blame.  It was the dreaded “fish room”—a less than Better Homes and Gardens-worthy bedroom in Dorinda’s Berkshires mansion that the ladies argue over every year. Seriously, how much time were they really going to spend in their bedrooms, anyway? But still, Luann felt that since she had deigned to come, and since their friendship was hanging from a very precarious string,

Dorinda should have bent over backward to accommodate her, and make sure she got the very best room in the house.  Instead, Dorinda had given the room to Bethenny in an effort to convince her to stay at the house, rather than a hotel like she had planned. Besides, Bethenny was still grieving, and in a delicate place, and Dorinda thought if she was going to bend over backward to accommodate anyone, it should be her.  Needless to say, the countess didn’t agree.

When the ladies went to dinner, and the room was  discussed, Luann said she just couldn’t believe that Dorinda would expect her to stay in the “fish room,” and Dorinda tried to defend her choice of decor, saying that it wasn’t as if Luann were staying in a shack, and that they were all “half million dollars” rooms.  No offense, but if she paid a half a million dollars for that room, I’ve got a beautiful bridge for sale.  But still, Luann was being pretty rude, not to mention childish–it’s a bedroom for crying out loud!

Tinsley must have felt the same way because she stepped up and offered to take the room, herself, despite the fact that she hated it as much as Luann did.  Luann said that was beside the point, and stormed off, saying that Dorinda “had a lot of nerve” under the circumstances.  Good Grief!

Well, there you have it viewers..a whole lot of childish nonsense, and somehow, still no real drama.  But the Berkshires fun continues next week…stay tuned!

TELL US – THOUGHTS ON THE LATEST RHONY EPISODE? DID LUANN OVERREACT TO THE FISH ROOM?