The Real Housewives of New York Recap: Tinsley Has Meltdown Over Luann’s Alcoholism and Relationship with Boyfriend 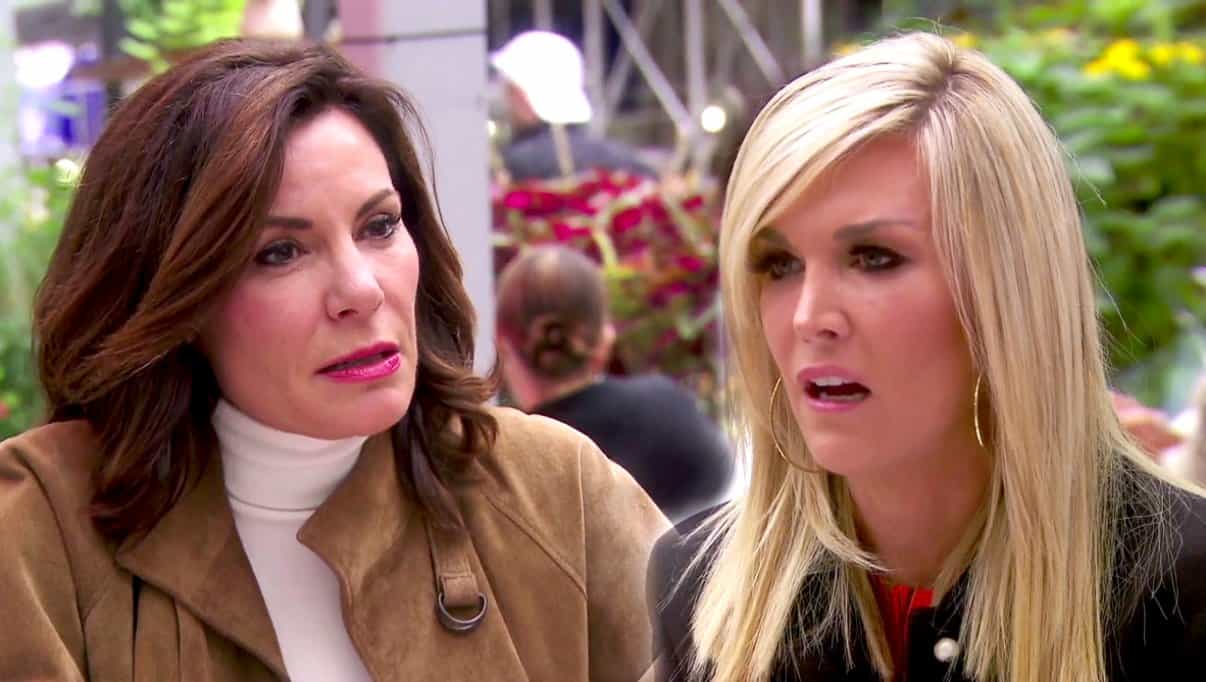 The Real Housewives of New York returned last night, and I had two takeaways from the hour: first of all, thank goodness that trip to the Berkshires came to an end because if I heard another word about that freakin’ “fish room,” I was going to gouge my eardrums out, and secondly, I’m seriously worried about Tinsley.

When we picked up with the ladies, it was their last night in the Berkshires, and they had just sat down to enjoy a lovely dinner prepared by a naked chef–as one does–when Sonja careened into a full-blown meltdown over Dorinda touching “The Morgan Letters” during their tour of Ventford Hall, a centuries-old Morgan estate located near Dorinda’s home.  She was sobbing and carrying on, and no one was quite sure what to do, so Bethenny sprung into action, and ushered Sonja into the next room, where she managed to calm her down, and convince her to let it all go, and return to the dinner party.

Of course, when they did sit down, they were probably left wishing they’d stayed in the next room, because for reasons that were not at all clear, Ramona returned to the table dressed in a black negligee and heels.  We were subjected to that sight for the duration of the dinner–as though the very naked and very hairy chef weren’t enough to endure–and when dinner was finally over, the ladies really got down.

Drinks were flowing, laps were danced upon, and a good time was had by all–except for Barbara, who had had enough already.  After all, she’s new to the group, and this was her first girls’ trip, so she retired to the dreaded “fish room,” likely too exhausted by the events of the day to even notice that a dead shark was staring out at her from the wall as she slept.

Barbara couldn’t wait for the morning, and the minute the sun was up, she beat it out of there, with Luann, who was happy to be leaving on good terms with Dorinda, at her heels.

Only Bethenny stayed behind throughout the afternoon, and she had a good reason.  She’d had a heady and supernatural experience while in Boston with her new beau, and she was anxious to share it with Dorinda, whom she was sure would be the only one to appreciate such a thing–or believe it, as she too had lost the man she loved.

According to Bethenny, while she was at the hotel, she’d found a note that  read “wow, you look fabulous,” and it was signed simply, “D.” Bethenny was certain that it was a message from Dennis from beyond the grave because not only was “spectacular” a term he used often, she said she really had looked quite amazing on the day she’d found the note (sigh). Back home, Bethenny looked over old letters and notes from Dennis, and became more convinced than ever that he had somehow left that note for her.

At pretty much the exact same moment, Luann, Ramona, and Sonja were across town getting their hair done, and Sonja couldn’t help but tell Luann how upset Bethenny had been when she’d found out that Luann had said “who cares” when Dorinda told her that she was saving the biggest and best bedroom in her Berkshires home for Bethenny, who’d “been through a lot lately.”

Luann was pretty unmoved when she heard about Bethenny’s reaction, and said she should have given her the room, rather than making everything about herself (was she actually kidding?!) as she whined “Bethenny, Bethenny, Bethenny.” When Sonja reminded her of all that Bethenny had done for her, Luann said she remembered, but said the least Bethenny could have done would be to give her the room of her choice, adding that it was hard to know where she stood with Bethenny because one day she was “saving her life,” and the next she was “beating her over the head with a baseball bat.” Spoken like someone who’s never been beaten over the head with a baseball bat.

Later, Luann met Tinsley –yes, Tinsley–for lunch.  It was an odd pairing, and it occurred to me that, not only have I never seen these two alone together, I don’t believe I’ve ever seen them say more than two words to each other.  Their time together was more than a little odd, as well.  Tinsley began talking about her father, who had been an alcoholic, and died three years ago after falling down the stairs while he was drunk one night.  Tinsley began crying, as she said that Luann was the first alcoholic she’d been around since that time, and said it brought up horrible memories sometimes, and hindered her ability to be sympathetic toward Luann’s battle.  After all, she pointed out, a person with a peanut allergy, doesn’t voluntarily eat peanut butter.

Luann explained that alcoholism was very much a disease, rather than a choice, and suggested that Tinsley attend an Al-Anon meeting (for the families and friends of alcoholics), which would enable her to get the support of other families and loved ones of alcoholics, who could certainly sympathize with her struggle. Tinsley’s reaction to Luann’s suggestion about the support group was noncommittal, and she quickly changed the subject to The Big Apple Circus, which she announced she will be co-ring mastering this year.

Now, you would think these women would have had just about enough of each other after the trip to the Berkshires, but no–Bethenny decided to have a dinner party.  What could possibly go wrong? Well, quite a bit, it turns out.

The evening started out pleasantly enough.  Bethenny didn’t even really complain when Luann showed up an hour and 15 minutes late, blaming the “traffic in Uptown” for her tardiness, despite the fact that all of the other ladies had come from the same area, and had been right on time.

Things didn’t start to take a turn until they all sat down for dinner, and Dorinda made a toast to Barbara for surviving the night she spent in the “fish room,” (ugh–here we go) adding that surely Barbara had woken up to scarier things than the shark hanging on the wall.  Everyone sat in stunned silence for a few moments waiting for the fallout, but Barbara actually handled it like a pro, and refused to take the bait Dorinda was wagging in her face.  She simply raised her glass, and said the room had been “lovely.”  When you think about it, this reaction likely got under Dorinda’s skin far more than any insult or snide remark she could have hurled back at her.  Well played, New Girl, well played.

Fearing tensions may be rising, Bethenny suggested they play a game of truth or dare (what are they, 13?), which somehow Ramona didn’t understand.  Bethenny chose a dare, and Ramona asked her if she thought she’d ever fall in love again.  Luann patiently explained to Ramona that such a question would really fall more into the truth category, and demonstrated how it was done by daring Bethenny to kiss Barbara.  Bethenny was game, and the two women shared an open-mouthed kiss, as the women looked on in shock.  Bethenny said it was a pretty good kiss, but Sonja didn’t look happy about it at all.

When it was Bethenny’s turn to come up with a dare, she challenged Dorinda to call her boyfriend, John, and have phone sex with him while they all listened.  Dorinda said that wasn’t really her style, but she called and flirted with him–badly–all the same.  She was a good sport–unlike Tinsley, who refused to make a similar call to her own boyfriend, Scott. So Bethenny upped the ante.  She dared Tinsley to call Scott and tell him that he was the one, and that if they weren’t engaged by year’s end, she was going to start seeing other people, which she also refused to do.

Bethenny then amended the dare again, asking Tinsley to simply call Scott.  She still refused, saying he would get mad if she did that.  She told the women to drop the subject, then got up from the table, and left, leaving the others dumbfounded by her reaction.  Tinsley went outside to smoke a cigarette with Luann, and told her that Scott would “kill her” if she did what the ladies were asking.  Okay, that was probably an exaggeration, but come on, what was Tinsley so afraid of?!

When Tinsley returned to the table, the ladies asked what she was so upset about, and she said she didn’t want to talk about it, to which Bethenny responded, “then why are we all friends?” Barbara piped up, and said that perhaps Tinsley didn’t want to be friends. Dorinda accused her of  being an “instigator” and an “interloper.”  Barbara denied being any such thing, and the two went back and forth viciously for a moment, before Bethenny cut them off, and apologized to Tinsley. Bethenny said she hadn’t realized it was such a big deal, after all, she’d just kissed a woman for the first time in front of all of them, so surely Tinsley calling her own boyfriend wasn’t a big deal.

Tinsley began sobbing, and Bethenny apologized to her again, and said that she was concerned about her because it seemed that Scott was very controlling, and seemed to be putting too much pressure on Tinsley.  She added that if they were best friends, she’d be trying to pull her out of this relationship.

I’ve gotta say, I have to agree with Bethenny on this.  No one should be in a relationship where they’re constantly walking on eggshells to the point of being afraid to call their boyfriend.  Poor Tinsley! It looks as though things go from bad to worse for Tinsley next week, as scenes show her once again sobbing over Scott, and she may have stepped out of his box because these tears are due to the end of their troubled relationship. Stay tuned!