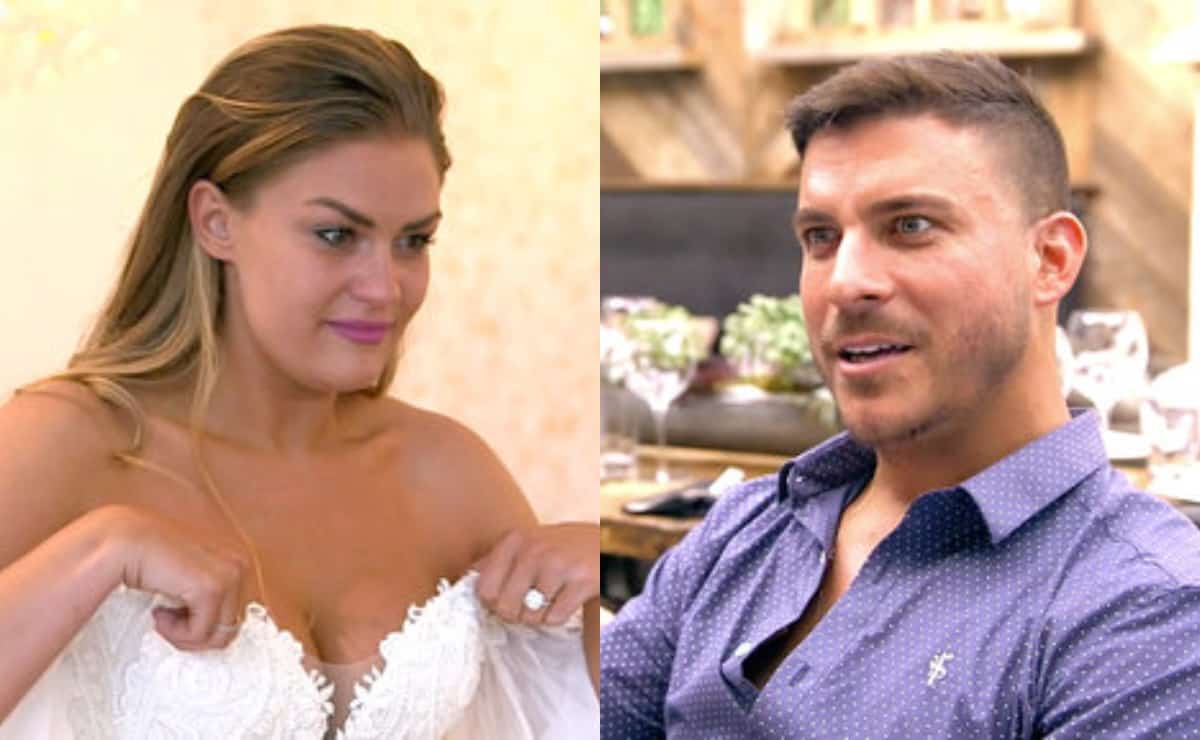 What’s with these people of Vanderpump Rules and their obsession with brunch?!

Sandoval watches as his lady, Ariana, lugs heavy equipment, cuz ya know, he no longer works at SUR. Ariana is prepping for the infamous Brunch with Billie Lee. LVP sashays in and it turns out that she didn’t find Schwartzie’s suitcase full o’money as funny as everyone else did. Ariana has about had it with LVP’s rudeness towards the Toms and states, “It’s really starting to wear on me and I don’t really understand the mentality of all that.” I’m sorry, but when did Ariana become the morality police?

Naturally, Sandoval brings up James to LVP. LVP stands firm on her decision about that punk kid (for now) and claims that “this is about James Kennedy learning a lesson.”

We get a taste of Jax’s family tree. We meet his sister, Jenny, and Brittany’s family rolls up in preparation for the big engagement party. Today, the ladies are going wedding dress shopping and I am pretty sure that Brittany’s accent is even harder than usual to understand when she gets around her fellow Kentuckians. Jax is sweating seeing Brittany’s dad, but believes all hard feelings are history, as he technically, “bought Brittany’s brother a baby.” Brittany’s brother held a fundraiser for IVF and Jax matched all the donations. He’s basically Mother Teresa.

Brunch with Billie is in full swing at SUR. Scheana attempts to make Adam jealous by telling him about her “friend” Ethan who wants to make her dinner. Buuut Adam doesn’t seem to care one bit. He tells Scheana, “When you went on dates with other people, I didn’t care.” So wait, what does that make them? Adam claims he isn’t ready to be with someone exclusively, yet doesn’t want Scheana to get with other guys. Her compromise is to “just not post anything” about her date, because that’s a mature way to handle the situation. It’s also difficult to take anything Scheana says seriously, as she is donning one of Adam’s Hanes t-shirts with a leopard belt. WHY.

Stassi, Katie, and Kristen head over to the wedding gown store to meet up with Brittany and her ginormous Kentucky entourage. Of course, the girls are very concerned about being asked to be a part of the upcoming wedding and Kristen is delusional enough to go as far as saying, “I think I would be an amazing maid of honor.” Sure ya do, Kristen. In reality, she’s an “amazing” psycho. Brittany, the bride-to-be, makes it to the store and wants to be a princess at her wedding, but really she is marrying a frog.

In the meantime, Jax and his sister Jenny decide to get a tattoo in memory of their father who recently passed. Jax once again attempts to explain his coolness towards his mother and refuses to forgive his mom for not letting them know just how sick his father really was. Ok, I get it. Jax is sad about his dad, but I think it is so bizarre that Jax is bringing his pop’s ashes to the tattoo parlor. This guy is off his rocker.

Brittany models dress after dress in search of turning into a Kentucky princess. In the midst of all of this, Brittany pulls Katie in the dressing room and asks Katie to be her matron of honor. Katie: “I don’t know what matron of honor is.” DUH KATIE. That means you’re married (somehow), but you do all the same dumb sh*t a maid of honor does for the bride…up to and including a potential speech at the wedding. That oughta be good. It may go something like this: Love sucks. Where’s the tequila? Does anyone have any Taco Bell?

Andddd it’s time for a James Kennedy scene. We ALL know how this meeting is going to go. James begs to have See You Next Tuesday back and whines and cries and whines and cries. He tells LVP he HAS changed (yet again) and that “SUR is my everything,” but has trouble keeping eye contact with his ex-boss. His sob story is borderline pathetic and LVP remains Ice Queen-esque towards him.

TomTom is popping and Ariana, Stassi, Kristen, and Sandoval gather for some drinks. Ariana shares with the gang her recent feelings towards LVP. It turns out that LVP trashed Tom and Tom in front of the press for their recent Mexico getaway, that LVP herself suggested. Sandoval admits that he is a punching bag and Ariana has decided enough is enough: she is going to confront LVP at Brittany and Jax’s engagement party. That’s a good idea.

Somehow Adam meanders over to the posse and they all remind him that his not-girlfriend Scheana is on a date with a different dude. Adam flip-flops back and forth about whether or not he cares about a relationship with Scheana, but as we viewers are treated to an awkward date between Scheana and Ethan (a man who wears a pinky ring), Scheana goes against her “no social media” postings and Snapchats. Big no no. Can we discuss Scheana’s massive glass of rose? I’m so uncomfortable watching Scheana once again throwing herself at yet another dude. She asks Ethan if he wants a girlfriend and flirts incessantly in the most awkward way… I am cringing.

Later, LaLa meets up with LVP. LVP reminds LaLa that despite the recent loss of her father, she doesn’t have permission to lash out at people, most importantly, lash out at fellow employees (i.e. Billie Lee). LVP tells LaLa that perhaps she could help James go in the right direction, as he appears to be a lost boy these days. LVP tells LaLa to “grab those big ears and shake them.” And that is exactly why I love LVP.

I get it. Brittany’s excited to be a bride, but her corniness with this bridesmaid brunch has reached the next level. All 325 of her bridesmaids are directed to open the message in the bottle and Kristen looks like she wants to throw daggers at Katie for being picked to be the matron of honor.

I love how quickly James and LaLa get together after LVP suggested the pep talk. LaLa wants to know how James’s headspace has been. James lacks of eye contact seems to be a reoccurring theme throughout. It appears as if he just doesn’t want anyone to realize how dilated his pupils are. James doesn’t even pretend to listen to LaLa as she sits on her high horse and talks about taking ownership and responsibility. Hello, pot. Meet kettle.

During the bridesmaids’ brunch, the girls get introduced to each other and learn about how Brittany’s maid of honor set her up with Jax. She shares that upon Jax seeing Brittany he said, “I would eat her a*s right now.” How. Romantic. The conversation turns to girl talk and gossip and Scheana shares that her date was “amazing,” but now Adam is upset with her. Scheana gets emotional about the potential thought of losing her “best friend” (who she also sleeps with on the reg). I still don’t get it.

As the ladies open their Beauty and the Beast roses, Jax brings the men in Brittany’s life to TomTom. Brittany’s dad drives home the importance of faithfulness, but Jax reassures her father that since the passing of his dad, he has changed. Brittany’s dad wants to be sure that Jax is trying his best to make his daughter his main priority. One of Brittany’s 35 brothers tells Jax that he “Talked to Brittany. She really seems to care about you…I don’t know why.” LOL. The family of Brittany forgets that Jax is a selfish guy and he digs himself a deep, deep grave when he reminds them all that he always needs to take care of himself before he takes care of anyone else, including Brittany. Ouch. That is not the way to get on their good side, Jax…