Home Featured Posts The Real Housewives of Beverly Hills Recap: Kyle and Dorit Turn Against Each Other

The Real Housewives of Beverly Hills Recap: Kyle and Dorit Turn Against Each Other

by Julia May 1, 2019 364 comments
ShareTweetWhatsappPinterestRedditTumblrMailFlipboard 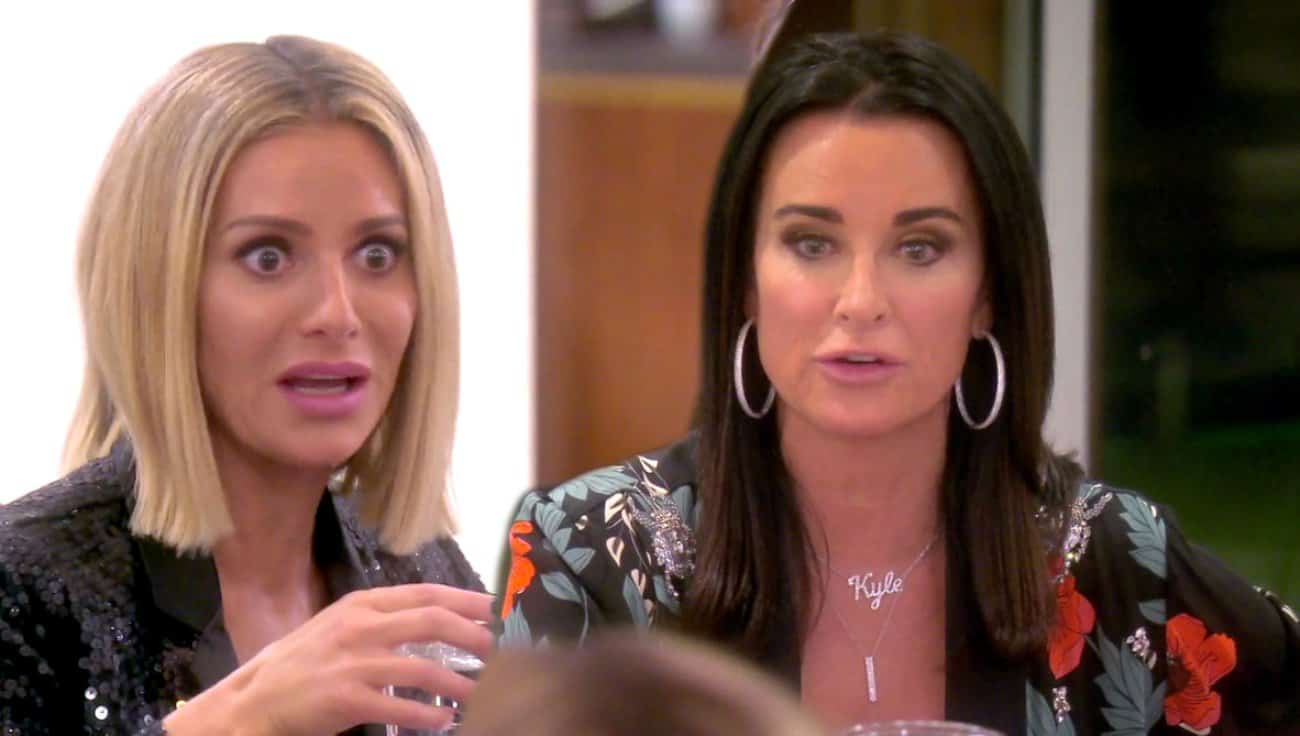 Take Erika and Rinna, for instance- two peas in a pod? Who knew? Rinna “so relates” to the hustler and fighter side of Erika and thus a friendship is formed. The ladies attend some sort of wack workout class where the instructor body shames Rinna, who does not take it very well. She reminds us, viewers, that she has her OWN workout DVDs (OMG. Dying over that.) and that she can hold her own.

Meanwhile, LVP’s kitchen remodel is moving right along. As the project goes forward, this $300,000 budget is getting tighter and tighter. Whilst perusing some stone countertops, LVP fills Ken in on the phone call she received from PK. Ken shares that he has no problem meeting with PK, but if Dorit’s joining, she better understand that LVP did not give that story to Radar Online.

Dorit’s got a new office for her fake bikini company Beverly Beach. JK, it’s a real brand, but I am not quite sure anyone actually purchases anything. PK arrives and takes a look around. He approves of the office and tells Dorit that he talked to Kenny and the lunch is ON. Now’s Dorit’s chance to smooth things over with LVP, but she is hesitant. “That loving part of me wants to make things right, but I’m not going to sacrifice my integrity.” Excuse me, what integrity? Because one dramatic topic isn’t enough for Dorit to handle, she reminds PK that his insensitive comment to Kyle at the Boy George concert was a bit offensive. PK offers to call Kyle and apologize again and hopes to move on from this drama.

Besties Teddi and Kyle rehash the Boy George concert issue. I thought Kyle said she wasn’t holding a “grudge” about PK’s comment, but then again, Kyle talks out of both sides of her mouth, depending on who she is around. She seethes that “PK’s stupid joke is implying I did something wrong” when it comes to LVP.

The ladies go walking around Lake Hollywood to work out. They discuss the upcoming RV trip hosted by Teddi Bear and she decides to do a happy hour the night before to sort of get the gang in the groove.

The forced friendships continue as Camille joins Denise for a bite to eat. Camille wastes no time getting chatty with Denise. In fact, she talks a mile a minute and I am pretty sure she is on some sort of upper. The conversation jumps from weddings to the concert and Camille explains what occurred backstage after the show. Camille claims that Teddi is a bit of a know-it-all and she is like “an entitled millennial.” While she’s at it, Camille keeps sh*t talking about every single girl in the group and Denise becomes uncomfortable, especially thinking about the upcoming RV trip.

Kyle’s a big fan of “attachment parenting.” Having your children sleep with you sounds like the absolute worst idea I have ever heard. Like, what’s the point of having a room for your 10-year-old if she doesn’t even occupy the space?! This is a huge juxtaposition to the child-rearing tactics in Denise’s household. She is clearly struggling with teenage daughters.

LVP awaits the arrival of PK and Dorit for their big apology lunch. It’s funny how both sides are expecting apologies, but in reality, only LVP truly deserves one. If you look closely, I am pretty sure you can see Dorit shaking in her bob. LVP and PK exchange jabs back and forth in preparation for the main event. The tension is thick until LVP jumps right in. Dorit demands to know why LVP didn’t call HER to find out how she was doing, but instead called TMZ to set the record straight. Dorit spins this crazy web and LVP basically tells Dorit if you don’t believe me about Radar Online, then we are not really friends. When Ken jumps in, he means business. He gets heated and gives an ultimatum. Either believe LVP or this friendship is over.

Did anyone else notice that Dorit lost her bizarro accent while she pleaded with LVP for her friendship? PK states, “I don’t think Lisa and Kenny want to be our friends.” These are grown adults behaving like 5-year-olds. PK wants SO badly to be on LVP’s good side that he essentially throws his own wife under the bus. He is begging Dorit with his eyes to forgive LVP and Dorit feels the position he is putting her in is unfair. Because Dorit cannot simply say “I believe you, Lisa,” Ken and LVP leave the table. Dorit follows LVP to tell her that she wants to move forward, despite thinking she is a liar. It gets to the point of hilarity when LVP tells Dorit that she doesn’t really love her and gets caught in a lie. Touché.

Kyle is anxiously awaiting the big holiday card and she is excited because her daughter Sophia is home from college…somehow she escaped the old attachment parenting, huh? The photographer looks baffled that people actually do this and then a dog gets loose, adding to the chaos. Once the dog gets wrangled back to the house and after Kyle works up a sweat, the fam fakes a smile to, ya know, get the *perfect* shot and that’s a wrap.

Teddi’s “happy hour dinner” is the preparation for the big down and dirty RV trip. Teddi has hopes that these women are actually ready to become one with nature, but then Dorit enters actually wearing bike shorts and it is evident that there is zero chance of them roughing it. Kyle is still holding a grudge, even though she said she isn’t holding a grudge because it is evidently the opposite day. All of the women (minus LVP, obviously) gather to talk about camping and then about…LVP. Of course.

While these simple minded women gossip, LVP is busy celebrating the decriminalization of homosexuality in India and even her dog is wearing a bedazzled turban. Who lives a better life than that woman? It’s pretty pathetic that the rest of the group cannot talk about anything else BUT LVP and Dorit feeds into this. Dorit shares her recent lunch debacle with LVP and Ken. Then, Kyle (I’m not holding a grudge) Richards uses that topic as her in to remind Dorit she is still p*ssed at HER husband. What is with these women? Why do they make everything a big deal?!

Dorit reminds Kyle that PK apologized to her, but Kyle doesn’t feel as though his apology wasn’t a real apology. I can’t… Dorit overshares and tells the women don’t worry, she, too, is still ostracized by LVP and Ken, BUT her husband is not. This sends Kyle into a tizzy. Kyle tries to play detective to figure out why PK is willing to go against his own wife to continue the friendship with Ken and LVP and the topic of how good of a friend they are to LVP resurfaces. Once again, we find Dorit and Kyle fighting over who is better friends with LVP. Erika says it right: “Guys, Lisa Vanderpump is not at home worried about either one of you.” I wish she said that to their faces!

Kyle claims she hadn’t even heard of PK until about two years ago and Dorit hollers that “their friendship is not based on if Kyle Richards has heard of them.” She does have a point, but where DID PK and Dorit come from?! When Dorit shrieks she doesn’t know ALL of Kyle’s friends, Kyle blurts out that maybe they aren’t that good of friends. Not quite sure how these two turned against each other, but seems like we have another dramatic topic on our hands here that should last us at least until the end of the season…