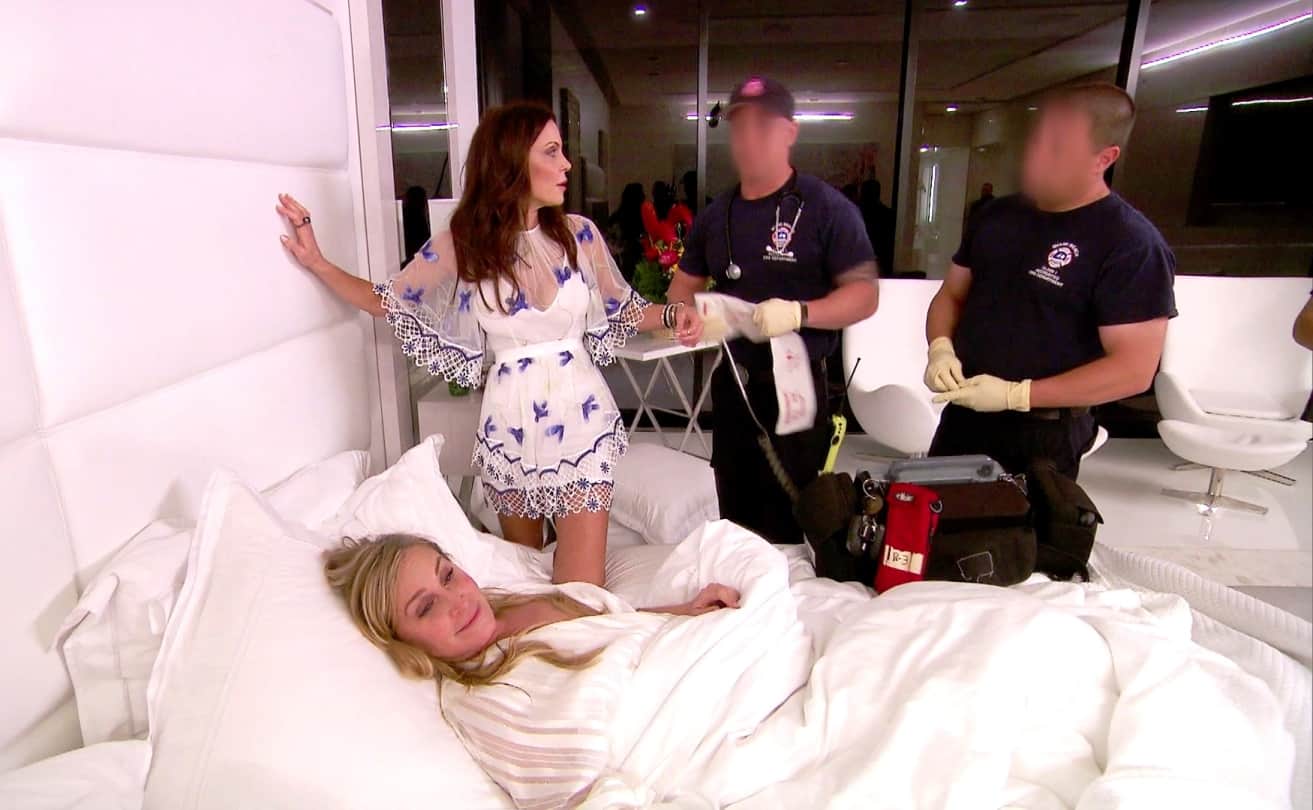 The ladies of The Real Housewives of New York continued their trip to Miami on last night’s episode, and capped off their first dinner with a bang–to the head.

When we picked up with the RHONY crew they were busy picking Sonja up off the floor.  She was tired, okay?! Don’t judge.  She’d exhausted herself in her blow up with Luann, and it had nothing, whatsoever, to do with the dozen, or so, welcome mojitos she’d downed in the first hour or so after they arrived.

Barbara was sure Sonja had hit her head on the edge of the table, but Sonja insisted that she was fine.  All the same, Bethenny insisted on calling the paramedics because ‘all the horror stories’ she’d heard about people falling and then suddenly dying in the night had her rattled.

Ramona and Tinsley were decidedly less concerned about their friend, and they continued getting ready for their night on the town, casually sidestepping the ambulance parked in the driveway, as they made their way to the chauffeured SUV waiting to whisk them off to the club. Luann also stayed away because she simply ‘could not look at’ Sonja after the things she had said to her during their argument.

But as it turned out, they were right not to worry.  Sonja was fine.  She was even coherent enough to get a nice dig in at the president when Bethenny quizzed her on the basics in an effort to rule out a concussion, and soon it was decided that there had been quite enough drama for one night and everyone hit the sack, and likely dreamed of a life where vacations were for relaxing and not cat fighting–but who’d want to watch that? On to day 2…

The following morning, Luann worked out while the others lounged over breakfast in their pj’s and trash talked her in barely hushed tones.  They’re still over Luann and her ‘Joan Crawford act,’ and they’ve all decided that she’s a narcissist of the highest order.  But, as Luann explained to Ramona, the only one who bothered to say good morning, they’ve got her all wrong.  Luann said they were simply “jealous of her success” (see, no narcissism there!) and they were horrible friends who would rather tear her down than build her up like girlfriends were supposed to do.

Luann also said that being around the women while trying to maintain her sobriety was becoming increasingly difficult.  It was one thing, she explained, to be around people who were drinking, it was quite another to be around a bunch of “sloppy” drunk women.  She admitted that she’d known Sonja had gotten hurt, but that she just hadn’t felt like checking on her.  After all, she pointed out, no one had bothered to check on her after Sonja had said all those nasty things to her. The Countess was feeling vulnerable, yet no one saw fit to make sure she hadn’t retired to her room with a gallon of vodka, which she admitted had seemed awfully tempting after the earful she’d gotten from Sonja.

But Luann isn’t a complete jerk, and she soon made her way over to Sonja to see how she was doing.  She told Sonja that she was genuinely concerned about her drinking, adding that falling out of a chair at dinner was ‘not normal.’ Sonja told her that was pretty rich coming from someone she had once watched fall head first into bushes.  Sonja had a point, and Luann had no choice but to concede it.

And Sonja wasn’t finished.  She told Luann that she needed to “tighten up” and watch what she said about her, a reference to Luann’s comments about Sonja appearing “manic” and wondering if she was “on pills.” It was an irresponsible and reckless comment to have made in mixed company (not to mention on national television) and Sonja did not appreciate it.  Luckily, Luann had the wherewithal to apologize, and the two were soon hugging it out.  Sonja’s like a lovable, but overly exuberant puppy..she can’t stay mad and no matter how many messes she makes, it’s nearly impossible for anyone to stay mad at her.

The ladies were planning a party for that evening, and Ramona was excited at the prospect of all the game she’d be running on ‘her men.’  That’s right, people. Men--as in plural.  She was juggling Kevin, aka The Rum Guy, and her ex-husband, Mario, who said he’d “visit” her in Miami during the trip.  But this is Ramona we’re talking about, and two men simply wasn’t enough, so she took off to meet up with a few other friends at a nearby hotel while the others soaked up some Miami culture, including a visit to a famous, local artist, who gifted each of the ladies with not one, but two pieces of his signed work.

As the time for the party drew near, Ramona became increasingly excited, and said she felt like she was ‘going to the prom’ as she primped in the mirror and told the ladies about her new guy.

When the party got underway, Ramona flirted shamelessly–if you can call reaching up into the back of your too short dress to pull your Spanx over your butt flirting—while Mario looked on in amusement, or maybe it was amazement, at the spectacle that was his ex-wife.

It was at this point that Sonja, who had vowed to cool it with the drinking for the evening, came along and greeted Mario warmly, telling him how great it was to see him and how Ramona had invited him there to make her new guy jealous.  Mario took the information in stride, and made Sonja promise to let him know the minute the “other guy” arrived.

Luann also seemed to have love on the brain.  She spent good part of the night flirting with a cute, albeit clueless (he “forgot” she was sober and offered her a cocktail) old friend named Derio.

Tinsley, on the other hand, had no interest in meeting a new guy.  Miami had been ‘her and Scott’s town’ and being there was getting to her.  She missed him,  and she was sad, which made it the perfect time for her sister, Daphne to pay a visit.  The presence of her sister seemed to cheer Tinsley, but she couldn’t help but get choked up when she was talking about Scott.  Like Tinsley’s friends, Daphne believes that Tinsley deserved better than Scott and his noncommittal, sometime-y ways. She advised her sister to move on and find her “next victim.”

To that end, Bethenny introduced Tinsley to Brett, a cute, successful man that Bethenny had once been set up on a date with.  But the introduction was awkward at best, and Tinsley walked away wondering where all her mojo had gone.

The answer was it had gone to Ramona.  She had ALL the mojo.  She was expertly juggling two men, and had them both eating out of the palm of her hand–that is until Sonja came back to spill more tea.  She blabbed to Mario that Ramona had kissed Harry.  Mario seemed surprised by the revelation, but again he took it in stride. He asked Sonja if she was jealous, and she said she wasn’t because she knew Harry loved her.

Minutes later, Dorinda joined their little circle, and confirmed Sonja’s story about Ramona and Harry’s big kiss.  She added that Sonja’s men had made the rounds among the women, and had been “cross pollenating” them.  They laughed until Dorinda asked if Mario might want to cross pollinate with her, at which point he got quite serious and said simply, and in no uncertain terms, no.  Ouch!

Well, the show faded to black from there.  What can I say, it wasn’t the most exciting episode I’ve ever seen, but based on the scenes from next week, the ladies are about to give us all the drama we can handle.  Stay tuned!