The Real Housewives of Beverly Hills Recap: Teddi and Kyle Attempt to Bait Erika, Plus Kyle Reveals Past Anorexia Battle 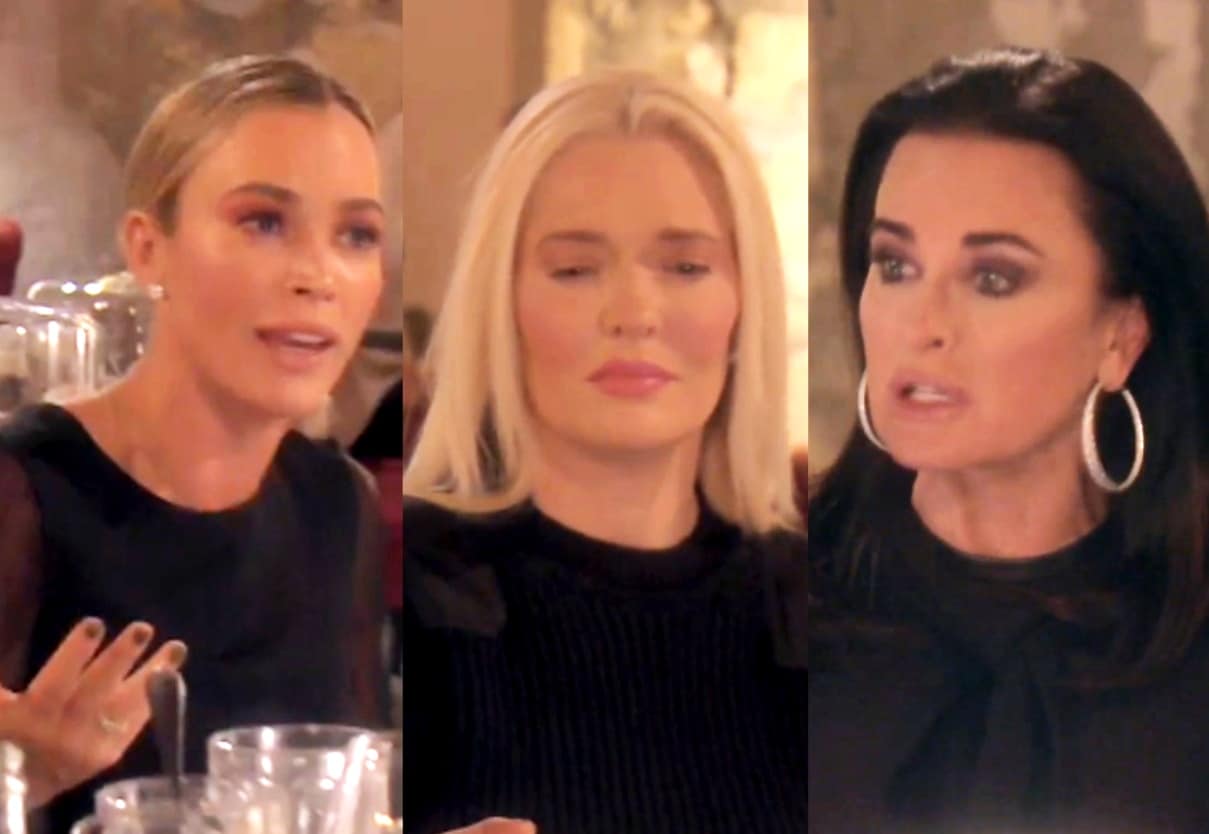 On this episode of the  Real Housewives of Beverly Hills , they’ve landed in Provence, France. And by they, I mean not LVP. Don’t get your hopes up…

Kyle, Rinna, Teddi , Dorit , and Erika have more luggage than 42 women and it’s 1,000% obnoxious. Denise and Camille did not come on the trip, as they are experiencing a horrific fire in Malibu and had to be evacuated from their homes. It’s truly devastating.

“I love France!” Of course you do, Kyle. Homegirl pretends like she misses LVP, but the reality is she’s happy to be the queen bee of the show now. Dream on. On the way to the French chateau, Rinna checks out the fire damage in Malibu, becomes depressed, and then turns that frown upside down once she sees “Downtown France Abbey,” whatever that’s supposed to mean.

The women ooh and ah as they meet the “local hosts,” aka their servants for the stay. I gotta give it to Kyle. She did good with this chateau. It IS pretty incredible: 17 acres, fully staffed. Ah, to be rich! Can’t wait to see Rinna disinfect the hell outta the chateau room. You can take her out of Beverly Hills, but she’s still gonna be extra AF.

Kyle attempts to explain to the staff prior to dinner why they are missing some of the gang. The cook seems confused, but she can’t wait to feed them….little does she know, these ladies eat like birds and no lobster dumpling is gonna be finished in its entirety.

My favorite is the fashion show these women put on for themselves all whilst they sit in the chateau. Like, where are they going? Why the diamonds? They all try to outdo each other and it’s pretty incredible. Before dinner, Kyle phones Denise to hear some Malibu updates. Things are looking pretty grim for her and her home. When they talk to Camille, she lets the ladies know that, as of now, her house is still okay.

We begin to see a new side of this “bestie” group. We learn Teddi’s nickname was “Butch,” Kyle’s was “Kyle B*tchards,” and that Dorit stole the family car at the young age of 13. I wonder if she had her accent then? At the dinner table, Rinna obviously has to bring up her Erika Jayne Halloween costume. She clearly KNOWS that by bringing up that topic, sh*t would get tense, especially with Kyle involved. Somehow, this situation ends with laughter (cuz they are all wasted, I suppose….) and there is no bloodshed. Someone take the mic away from Kyle B*tchards. Naturally, she comments on the expensive food: “23-carat gold, don’t even get it twisted.” She also makes a wack toast: “I think all of you women are f*cking amazing women.”

At 5:00 AM, Teddi and Dorit get the news: Camille’s house has completely burned down. It’s super upsetting to see the videos of the fire ravaging the homes. In lighter news: let’s hear it for Erika, the hangover queen. Someone get her some McDonald’s breakfast ASAP. The way these women can flip flop from, “OH MY WORD, POOR DENISE AND CAMILLE” to “are there any French markets around??” is laughable. Their priorities are all over the place and it seems as though Camille isn’t the only one with two faces, amirite?

LOLing over Kyle trying on hats…we allllllllll know Kyle’s never met a Fedora she didn’t love! Also LOLing over Rinna taste-testing the cheese. The ladies grab some lunch at a café and Rinna makes a big announcement. Essentially, Rinna’s bragging that her daughter’s anorexia has brought her success and a career path. Teddi asked Rinna if she knew about the anorexia and then, of course, Kyle decides to share her eating disorder problems that she “never ever talks about.”

Kyle explains that she was 17 on a show when her anorexia started. She lets her friends know she was very self-conscious and that she was stuck on that vicious cycle of getting complimented for being skinny and restricting her diet even further. Kyle becomes emotional, the ladies cheer her on, kiss her a*s, and talk her into sharing her story with her daughters. Erika explains that it feels like a safe place because “Lisa Vanderpump isn’t here.” Way to remind me that the greatest part of the show is missing. After sharing secrets, the women sightsee a bit and act like tourists.

Why is Dorit wearing a Black Panther beret? Why is Rinna attempting to speak French with Harry Hamlin? SO MANY QUESTIONS. A night out on the town is in the cards for these girls. Can we discuss the menu situation at this restaurant? Did they make it extra large so the women wouldn’t have to whip out their reading glasses? Because they have been having way too nice a time without any drama, Kyle needs to bring up the Rinna vs. Kim incident at Farrahween once again.

Kyle demands to know why Rinna thought it was okay to bring up the whole bunny issue dressed as Erika Jayne. Teddi suggests that Rinna was wrong to use the costume as a crutch because that’s simply not how Erika acts IRL. Erika steps in and says, “Everyone knows that’s a performance persona.” Rinna needs to know the problem Teddi has with the situation and Erika can’t quite wrap her head around what’s going on.

Rinna retorts to Teddi, “I don’t care whether you like me or not.” Wait, what just happened? Kyle smiles dumbly, but it seems like Teddi and Kyle are both trying to get Rinna in hot water with Erika. Why? I am not sure…but that appears to be the case.

Rinna insists that, “Erika Jayne allowed me to break the ice to have a conversation with your sister.” Kyle reiterates that everyone was uncomfortable watching Rinna attack Kim, but Erika could not make it any more clear that she is not bothered by any of Rinna’s actions. Erika finally declares: “STOP. It’s a performance persona. You guys are trying to bait me into this conversation.” Go Erika!

Teddi, as usual, does not know when to stop and claims she just, “doesn’t understand. She’s not an idiot.” Erika states that Teddi and Kyle are relentless and now things are awkward. Way to go AGAIN, Teddi and Kyle. Looks like the plan to stir up some dirt got thwarted. You can actually see Kyle’s face deflate as she realizes Erika shut it down and shut it down fast. Is now the wrong time to ask where Brandi is?! Didn’t she get invited? Man, that sure would have rocked Kyle’s little world…if Kyle wanted drama, Brandi would have been ready to dish it.

TELL US – WHAT ARE YOUR THOUGHTS ON THE RHOBH EPISODE? IS TEDDI DOING KYLE’S DIRTY WORK?