Southern Charm Recap: Madison Reveals Shep Once Hit on Her 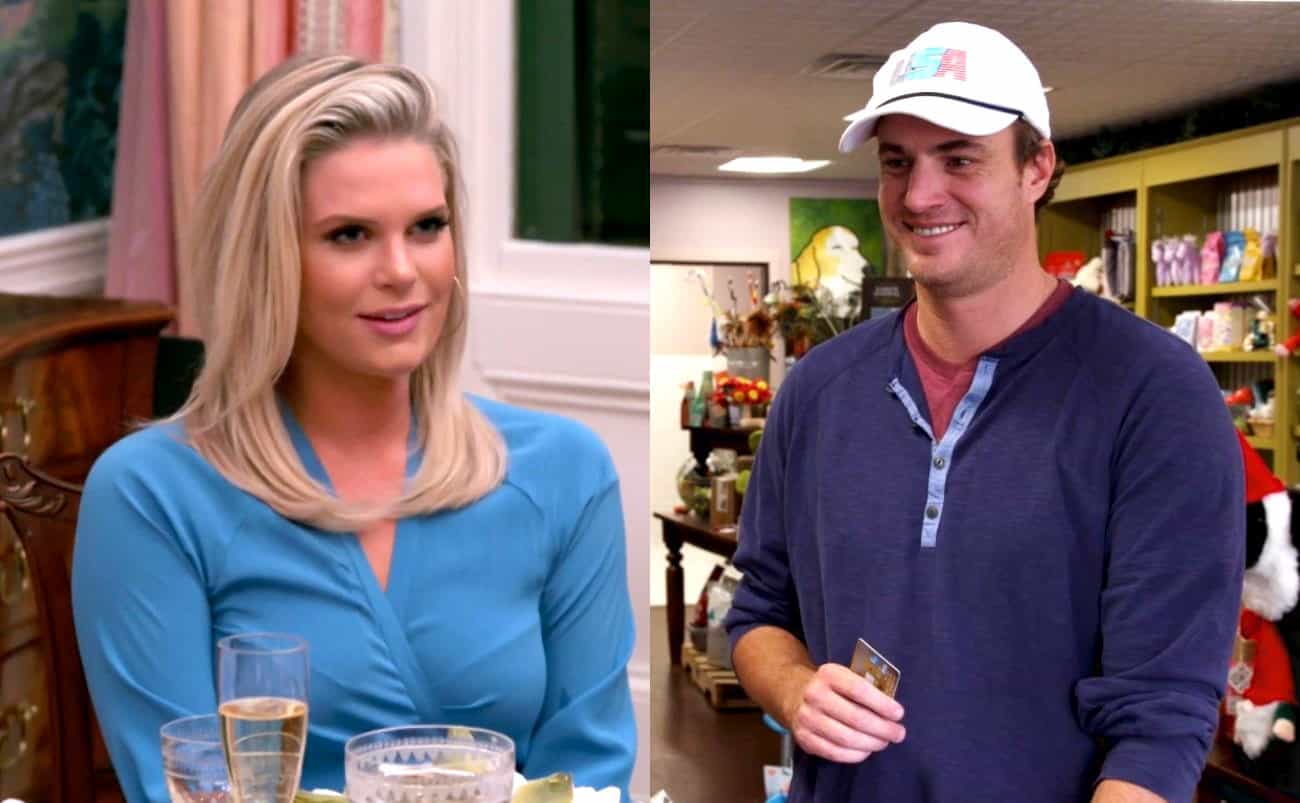 This episode of  Southern Charm poses many questions like, is it ever okay to tell someone you are smarter than they are? Are you really broken up with your ex if you hang out?  We may not get the answers, but at least we get to see how it all goes down…

The smell of the great outdoors in the smoky mountains—just a couple of bros being bros after a night a camping and roasting…Craig, not marshmallows. When Craig emerges from the RV, Shep and Whitney show zero remorse for the bash fest, but Shep acts as though all is good now that he gave a half a*s apology. Typical Shep behavior.

Back in Charleston, Chelsea meets Danni at the OBGYN. The ladies talk about freezing eggs anddddd about Kathryn. Cuz ya know, the two topics are interchangeable?? Danni chats it up with the doctor and finds out all the deets about egg freezing. The doctor gives her the real insight—the process, the odds, the price. Danni decides to let the idea marinate a bit, as it seems to require more effort than she expected.

The fellas finally make it to Nashville and check into their penthouse. I guess those long hours in the RV make it all worth it. Thanks, Whitney! He’s like their dad… They all get ready for a night out on the town—Whitney dons an overcoat on top of his denim, Shep some new facial hair that needs to go ASAP. Despite the trip trying to cheer Austen up about his break up with Madison, he can’t seem to shake her. “Madison just sent me a pic of her looking hot as f*ck.” When Shep tries to cheer Austen up talking about all the ladies they will meet throughout the evening, Austen becomes enraged. It seems like they are off to a great night!

Over dinner, it is clear that Whitney and Shep are not done messing with Craig. And Craig is just straight up getting “ornery.” They jab at Craig’s wine choices and anything else Craig does or says. Eventually, Whitney states, “You guys can just order. Dinner is on me,” insinuating that once again, he is the caretaker of these much younger, much broker gentleman. This is all true.

Craig lights up when he reads about Kathryn and her custody battle. He uses this nugget of info to ask Whitney how Kathryn was, “When you hung out with her and hooked up this summer…” Way to sneak that in there, Craig. Back and forth Craig and Whitney go, and when Whitney actually retorts to Craig, “you started it,” I realize that we are clearly dealing with children. Shep is straight mean when he tells Craig he is smarter than he is, which may or may not be true, but does not have to be said. LOL.

Back in Charleston, Patricia is putting French bonnets on her pug—a very LVP move. Patricia has decided it’s a “#metoo movement,” so therefore, she will start to plan a girls’ dinner. She’s used to doing it just for the guys, but since most of them are in the slammer and the rest are partying down in Nashville, she has switched the plan up a bit.

Speaking of partying in Nashville, the boys invite any female with a pulse at the bar back to their suite. It seems as if Shep is solely hitting on the girls that Austen talks to. Austen essentially sinks himself since he just talks and talks about Madison, to any female and any stranger for that matter. After a night of raging into the wee hours, the dudes pack up and head out just as fast as they got there. This time, though, they are flying back to Charleston. Enough with that RV BS. Home sweet home it is.

What love does to a person! Naomie is attempting to make her boyfriend, Metul, some buttered chicken, an Indian cuisine. Metul stands by and is a bit snotty as he watches Naomie put her all into this dish. He critiques her every move, but despite this character flaw, Naomie states that she thinks Metul is “the one,” so he better like her chicken dish for crying out loud. In the end, they order sushi, cuz yea, Naomie failed.

It seems like all Chelsea does is visit people. Now she’s at Kathryn’s house. Kathryn is wearing some ridiculous ensemble while she lounges around in her house, and Chelsea is solely there to talk Kathryn into mending things with Danni. Kathryn explains that she is still bothered from the girls’ trip by Danni. She claims that this whole Danni issue is “disappointing,” and peacekeeper Chelsea reminds Kathryn that it’s hard to find people to trust. Chelsea is trying to let Kathryn know that whatever this little disagreement between her and Danni is, they could and should get over it ASAP.

It’s the night of the girls’ dinner at Patricia’s. The house is bustling and Patricia is prepping to be the hostess with the mostest. Madison and Naomie are the first to arrive, followed by Chelsea and Danni. I love how Patricia holds court and wants to hear all of the gossip. She’s a real sh*t stirrer, huh? Madison believes that Danni is the real reason for her breakup with Austen.

Madison also lets Danni know that she should have never said anything, and Danni actually apologizes for spilling to big-mouth Craig. Cameran (almost forgot about her!) saunters in looking exhausted, but the group is still waiting on Kathryn. Which means it’s fair game to talk about Kathryn and her new man, Joe. Naturally, the girls pull up his explicit photos and Madison yells out, “His p–is looks like a Ken doll.” The sad thing is, I now have a perfect visualization of what she is referring to, so thanks, Madison!

Kathryn and her friend, Madison (can we get another name here, ladies?), roll up late. Patricia wastes no time finding out about Kathryn’s new boo. Kathryn shares that the couple has recently split up because he was not what she thought he was. Shocking. Upon hearing this news, Danni and Kathryn have a side conversation in a different room—a chance for the girls to clear the air once and for all. Kathryn is just so used to people talking “sh*t about her” all the time, but after an emotional conversation, the friends are friends once again. Phew! Bring out the artichokes!

When the women sit down for dinner, Patricia teaches them artichoke etiquette and the girls teach HER about tequila shots. Hilarious. All it takes is one shot and then Madison starts with the whole, ‘I am single AF, woe is me.’ She shares that, “Shep called me a white trash hairstylist.” The women are shocked and Cameran reveals she suspects Shep is lashing out because he is not happy. Madison then drops a bombshell when she reveals Shep once hit on her… while she was married!

“I don’t know if he’s still bitter from me declining him when I was married and I wasn’t interested,” said Madison.

The women all agree that most Southern men have an overly carefree attitude about them, but not Patricia’s son, Whitney! Never! When Naomie asks, “What if Whitney and Kathryn get married?” Patricia knows she wouldn’t be unhappy about that because she would for sure get a grandchild then. #Awkward.

Why is Shep getting a dog? And why is Shep naming his dog CRAIG? How rude can he possibly be? Shep claims that, “Craig the puppy might be like Craig the human.” Ouch. Shep manages to spend $477.00 at the pet store, but what does he care? It’s not like he’s worked a day in his life for that money…

Austen, Kathryn, and Craig hang at the coffeehouse and let Kathryn know that the boys’ trip wasn’t as successful as they had hoped. Austen tells Kathryn that Whitney denied “hanging out” with Kathryn. He lets her know how crummy Shep was the entire time. Kathryn calls Shep two-faced, and the conversation turns to Madison and Austen.

Austen comes clean about the fact that he hung out with Madison, and Craig immediately becomes hot and bothered. “Austen and Madison’s relationship makes zero sense to me.” Austen berates Craig and tells him that he is mad at himself for allowing others to break up his relationship with Madison. Craig stands by looking baffled, upset, and confused. What else is new?  So what is it, Austen?  Are you single or are you truly broken up??