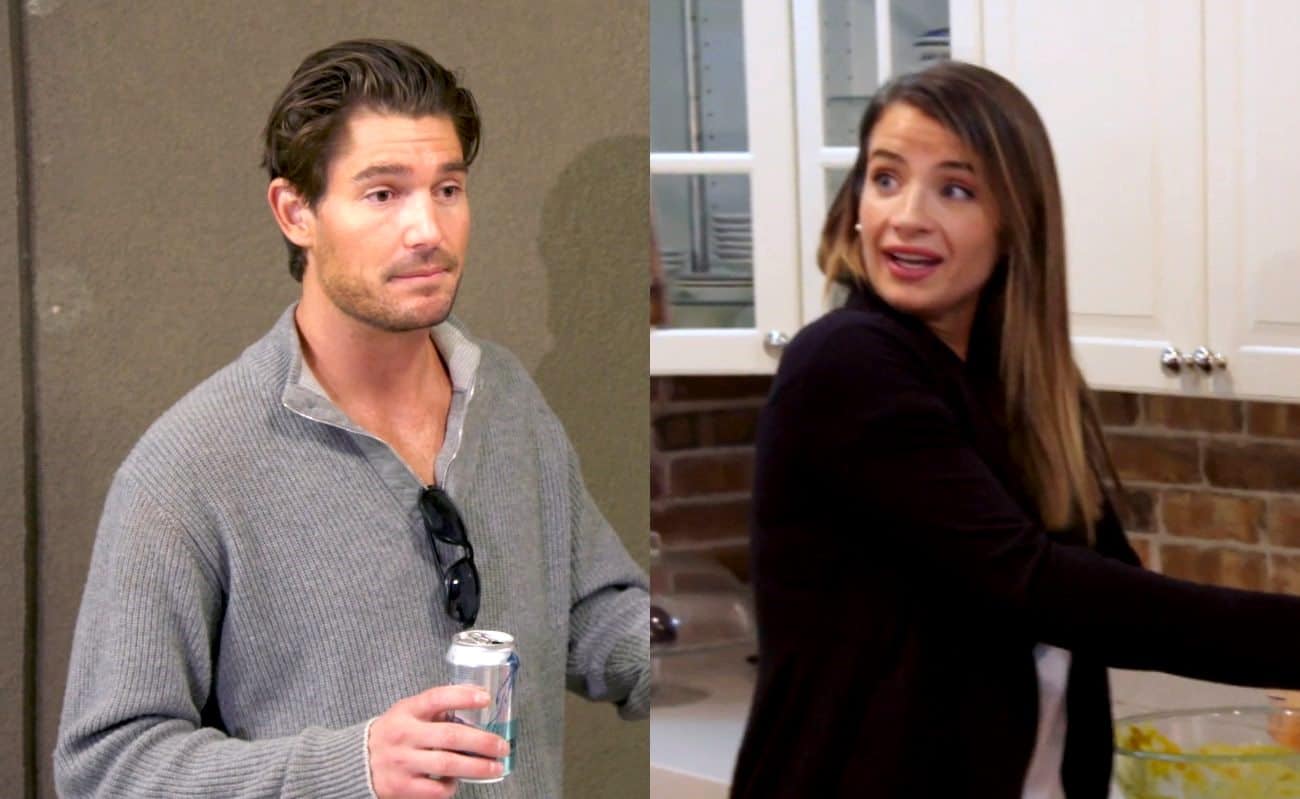 Can exes ever truly be real friends? Can moms ever truly be fun again? On this episode of Southern Charm, we watch Craig continue to live in denial and Cameran attempt to get her “cool back.”

Shep is busy prepping for his dog, Little Craig, not to be confused with Craig, the pillow “entrepreneur.” Cam goes with Shep to pick up the pup. #Random. It’s a terrifying realization when you recognize that Shep’s soon-to-be new puppy is probably smarter than he is.

In the meantime,  Chelsea is rocking yet another Curious George hat whilst fishing with Austen. Chelsea very clearly knows what she is doing (more than Austen does—I mean, Austen is wearing KHAKIS). The two get to talking about things, and by things, I mean Shep. Chelsea nonchalantly sneaks in, “Speaking of Shep, he called Madison white trash?” When Chelsea presses Austen as to why he wants to remain friends with Shep, Austen is at a loss for words. Chelsea also tries to get to the bottom of Austen’s love life and suggests he start behaving like an adult. Ya know, go to bed early. Have a job. Those kinda things. The guy is clearly heartsick over Madison, so he may actually heed her advice.

Shep looks super nervous to meet Craig, who is one of seven puppies in a litter. Little Craig is adorable, as is the skin-to-skin contact Shep is making with the pup. Poor Craig has no idea what kind of father he has…let’s just hope Shep can tear himself away from the bar to let the dog out!

Naomie meets up with Kathryn, and the ladies visit a hypnotherapist. Did you know that adults go in and out of hypnosis at least 7-8 times a day?! Yea, I didn’t either… Naomie has been doing hypnosis to keep herself zen, and now that Kathryn has been dragged into it, Kathryn becomes emotional during the session. She claims that the positivity the hypnotherapist spewed made her feel special.

Enough about that…bring in the dirt. Naomie blurts out, “Oh my God, I didn’t tell you this!” Craig texted Naomie and Naomie was a bit cold toward him. Naomie claims that she is just trying to be respectful to her new man, Metul, but I think she just secretly enjoys torturing Craig.

Cam is out shopping, and her friend Leva joins her. Cam makes it very clear that she is not going for baby #2, and in case you forgot since the last 42 times she has said it, Cam is not loving that mom life. “I see a lot of kids who rule the roost and that’s not gonna happen in my house.” As she preps for her 35th birthday, she promises to be a bit more fun than she has been lately.

Life with Little Craig the puppy has rocked Shep’s world. He needs to get that dog some treats or something other than a friggin photoshoot with Raheel, the photographer. The other Craig comes in the midst of the shoot, and the guys pose with Little Craig. Super dweeb status. Shep lets Craig know that he’s a little “miffed” that Madison knows about the white trash hairdresser statement.  The guys further discuss Cam’s super cool backyard 35th party.  Note the sarcasm.

BFFs once again, Kathryn and Danni act as though nothing happened as they pal around on Danni’s bed. The girls discuss Cam’s party and whether or not Eliza (who??) will be in attendance. Kathryn makes it perfectly clear that she has never been friends with Eliza, but she will be civil with the girl. I’m more wondering if Cam’s husband, Jason, will be at the party….???

Cam claims she “can’t hang like she used to…” If only she heard Shep say, “She’s always been lame, even before she was a mom.” Ouch. While waiting for her guests, she rips shots and accepts a cake from Chelsea, cuz ya know, Jason is on call. Eliza rolls up with her 14 years older boyfriend and an open beer? Naomie is the next to come, sans Metul, her “Indian God.” When Shep rolls up with puppy Craig, everyone swoons. Shep explains that THIS Craig is smart, and Austen agrees that he likes “this Craig way more than the other one.” Austen just feels extra entitled since he actually brought his beer to the party. Ah, it DOES exist!

Cam is downing drinks like crazy, and the other Craig finally makes his entrance (how bad is it that he has been demoted to “the other Craig” and the dog is just straight up “Craig?”). He has a chip on his shoulder when it comes to Austen, as he is annoyed that Austen left the bar because he “promised Chelsea.”

Craig is p*ssed that Austen told him to come have some drinks, but then up and left all because Chelsea told him he should be more accountable for his actions and head home early from boozy nights. Craig hollers, “You are f*cking losing your goddamn mind.” He then turns and points to Chelsea and straight up tells her she sucks. Chelsea laughs in Craig’s face, thus egging him on further. Craig is practically foaming at the mouth, and when Naomie gets applauded for leaving Craig, he gets more upset. Craig tells Shep he is frustrated and that the situation, “is literally a mirror image of America right now.” LOL. Can someone say drama queen??

Cam is officially wasted. Perhaps it’s because there’s nothing to eat at this party but oysters, and who really likes oysters that much?? Cam tries to focus as Shep and Austen pep talk her and invite her on a two-night party trip to Colorado. Cam yells out to everyone that they are allllll going to Colorado. As the night winds down, Shep chats with Kathryn and invites her to Colorado as well. They talk about Little Craig and Eliza, and Kathryn brushes her off as if she is a gnat. On the side, Naomie lets Danni and Cam know that she doesn’t want to go to Colorado…all because of Craig. Danni reminds Naomie that she is friends with everyone else, so she should be coming. Naomie is not sold…

As the crew heads out, a few of the gang gathers round and discusses the upcoming trip. As Austen sits down, he shouts, “Craig, you’re a douchebag. Not everyone’s ex-relationship is as f*cked up as you and Naomie’s.” Craig still won’t let it go that Austen is taking advice from HIS ex. Meanwhile, Craig is still pining over HIS ex, Naomie. It’s very clear. Drunk Cam spills all of the beans. She tells Craig that Naomie doesn’t want to come to Colorado because of him. And that’s exactly the point when Craig leaves reality… He claims, “We can’t be around each other because we never closed anything.”

Drunk Cam makes Craig admit that he loves and hates Naomie at the same time, but Craig’s unresolved feelings are really what is making Naomie uncomfortable with the whole situation. Craig lives in la-la-land and tries telling himself that Naomie can’t be around him because it reminds him of how great their relationship was. Um, what? What universe does HE live in??? And what in the world is going on with Craig and his temper this season???