Southern Charm Recap: Whitney Denies Hooking Up With Kathryn as She Insists They Did 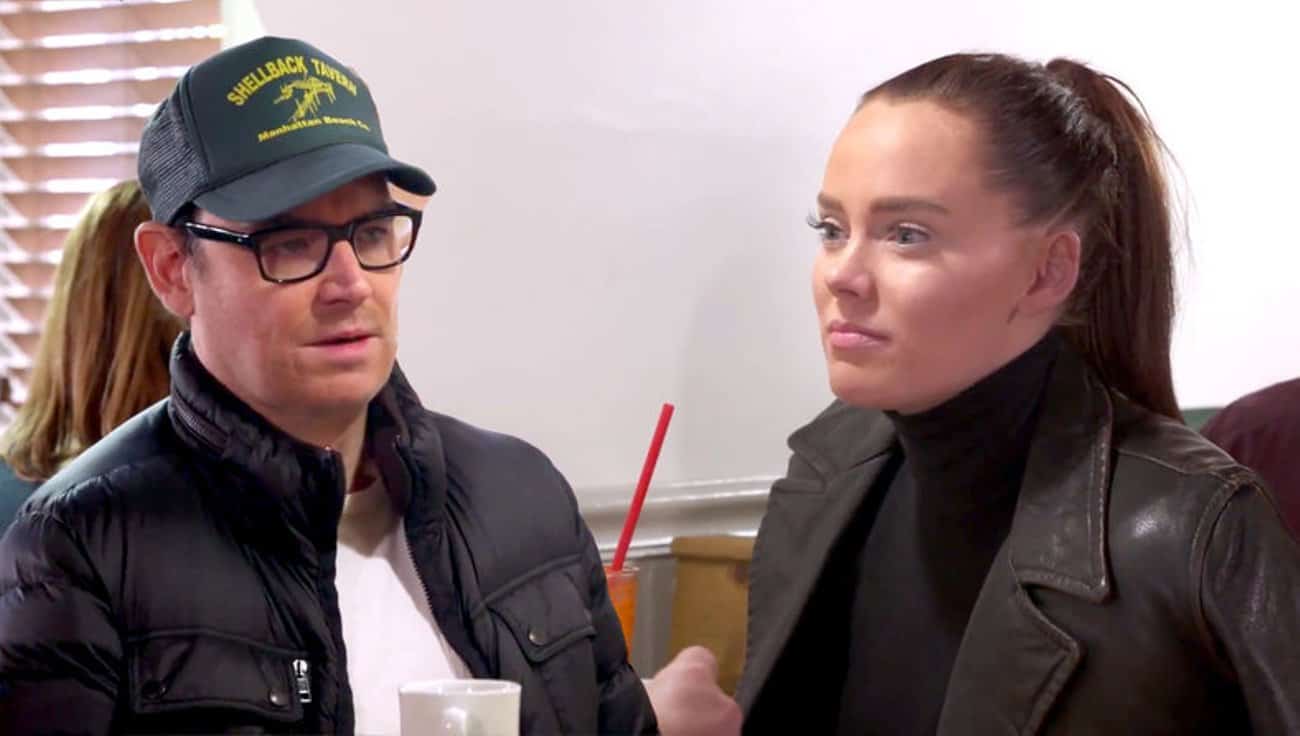 Group trips tend to bring out different sides of people, and as the Southern Charm crew preps for their Colorado adventure, we can only sit back and watch this trainwreck unravel.

Shep awaits the arrival of his “real estate expert friend,” Cameran, on James Island in South Carolina. Shep has purchased a ton of land in the wetlands…and I am no professional, but something tells me this is not the wisest piece of property to build on. The duo discuss the upcoming group trip to Colorado, and Shep reminds Cam that he can’t ski due to his bull-riding knee injury. Riiiight… Cam lets Shep know that she invited Madison, Austen‘s ex, on the trip, and you can tell that Shep gets salty hearing that news.

OMG. Naomie and her boyfriend, Metul, are legit wearing the same outfit. Also, what man wears a camel-colored car coat? Metul seems like a GREAT time, especially when it comes to eating. Upon looking at a cookie and a muffin, he retorts, “That’s diabetes in saran wrap.” Can you say Captain No Fun?! Sheesh.

Naomie plops down with her sad food order and fills Metul in on the events that occurred at the skeet shooting party. Metul remains stoic and reminds Naomie that she is who she associates herself with. Does this guy say anything nice? Metul tells Naomie, “Welcome to an adult relationship.” I am pretty sure not all “adult relationships” look like theirs. I mean, I for one can eat a cookie without getting berated…

Craig and his roommate welcome their old college buddy, Jerry, to their new and improved house. The dudes make some drinks, and they discuss Craig’s aspirations with sewing and the break-up with Naomie. Jerry tries really hard to keep a straight face upon hearing this pillow news. He finds it hard to believe that Craig created a tooth fairy pillow for a little girl named Penelope. Jerry suggests that Craig put some legit effort into this pillow business. If he does that, then Jerry would be willing to hook him up with people he knows who can help this business grow…that is if Craig’s gonna actually work.

Ah, time for the world’s most awkward meet-up: enter Kathryn and Whitney. Anyone else having a hard time looking at Whitney knowing very well that the guy wears his glasses whilst making love?! HA. They start chatting about the skeet shoot brunch that Kathryn missed and then jump right into Ashley’s debut at the party. Kathryn needs to talk to Whitney about their sexual escapade and demands to know why Whitney denied the big event. He even goes as far as saying, “we have a different interpretation of events.” OUCH. Whitney refuses to admit that he has had sex with Kathryn, and she’s a bit perturbed by his outright denial. I don’t blame her.

Austen heads to dinner with his mom and dad, probably for a free meal since he can’t even afford food because his beer STILL hasn’t been distributed. Same old story. Austen shares that the gang is heading to Colorado, where marijuana is legal…Austen has even gone as far as sharing that he plans to have a chef cook a meal of THC infused food for the group. Classic. Could you imagine Whitney chowing down on that feast?!

Everyone’s busy packing for the upcoming trip—Cam phones her husband (since they never actually see each other), Craig phones his assistant for…assistance, Kathryn packs not one, but two pairs of MOONBOOTS, and Shep preps for Little Craig’s sitter. The crew is ready for a good time. Once the plane lands, the party gets started with a quick make-up between Madison and Austen.

Craig’s already at Whitney’s throat once Whitney starts complaining about the bus ride to the house. He is tired of Whitney and feels personally attacked when Whitney debates taking a plane to the destination. As Craig spins out of control, Chelsea shrieks, “Craig, are you drunk?!” Craig lets Chelsea know that he will “never speak to” her again because he can’t be held accountable for his bizarre behavior, nor can he seem to get over Whitney’s complaints. He is being SO basic. According to Shep, “It’s America, man. You have choices,” and Craig should really lighten up about the whole bus thing.

Craig mopes on the bus as the rest of the gang boards. Nothing about this is awkward at all. Of course Cam insists on sitting right by a seething Craig, with Whitney in tow. What a terrible idea. It’s like poking a bear! Craig isn’t done sharing his frustration with Whitney. Craig yells, “That’s what happens when you get shipped off to boarding school in sixth grade” and “that’s what happens when you inherit $100 million dollars.”

With that, Whitney and Cam get OFF of the bus, and Chelsea and Craig begin to have it out. Chelsea, ever the lady, hollers to Craig, “You need to check your go**amn pants for a vagina.” Upon hearing that statement, Craig dramatically calls for his own car, but after the tantrum appears to have subsided, Cam, Craig, and Whitney all get back on the bus. Some beginning of this so-called “fun” trip. I’m already exhausted.

Austen is sure pushing for this weed, huh? He’s a bit aggressive about the dispensary, and no one really is as into it as he is. Kathryn gets all weird since pot was partially to blame for all of the issues she had in her past, but a few people in the group hop off the bus to make some purchases.

After much ado, they arrive at their two houses and the crew disperses. Everyone runs to claim a room, and it appears as though house #2 is bumping. Some of the guys head to dinner while Kathryn and Madison jump into the hot tub. Kathryn pries to find out how things are between Madison and Austen and thus begins girl talk.

How stoned does Shep look over dinner? He outright asks Austen if he is gonna “get some honey” on his “stinger” tonight. Uh, excuse me?! It’s very clear that the dudes are high as kites, as they have appeared to have ordered the ENTIRE menu. LOL. The guys all agree that it’s the “perfect weekend” to hook up with Madison and time will tell what actually happens.

Post dinner, Craig and Kathryn hop in the hot tub with Austen and Madison. They appear to be having a great time shooting champagne into each other’s faces, and then Austen and Madison exit the hot tub. They chat in the kitchen (so cringe-worthy), and just when you think they are gonna end up in each other’s rooms, they APPEAR to head in opposite directions. So much for that honey, huh?