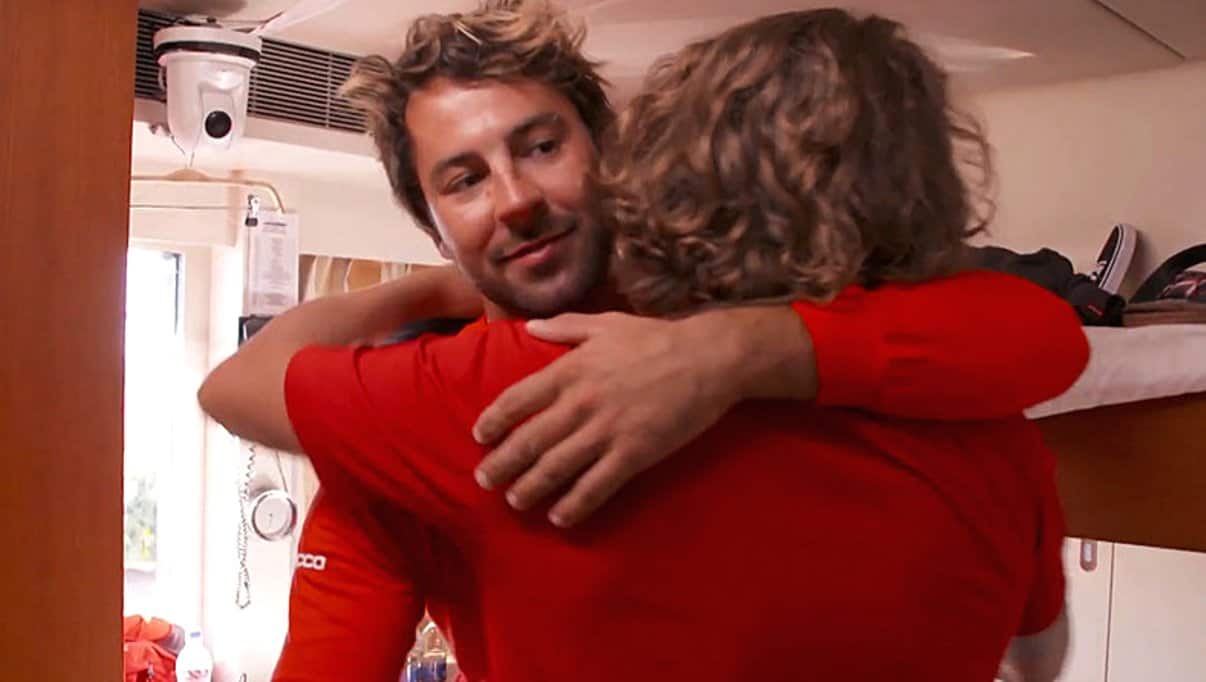 On this episode of Below Deck Mediterranean, the water gets a little choppy and the charter guests practically clean out Sirocco’s bar.

It’s the first night of charter, and this gang of cougars is out of control. Between the never-ending cocktails and the cold food, we have some serious problems. Ben states that cooking in the galley is “impossible,” and it seems like a prerequisite for being a chef on this boat is to simply make excuses for any and every problem that occurs.

We are finding out just how hurt Travis is over his roomie, Jack’s, new room assignment. “Aesha isn’t in the middle. She’s taken him away completely.” Jealousy looks good on no one…not even you, Travis!

For a bunch of drunk ladies, they have quite the palate. They are very particular about Ben’s dessert, and as the night lingers on, they discuss penises and begin their slow descent to hitting on any male on the yacht with a pulse. The guests essentially accost Jack until Captain Sandy steps in and saves him from the craziness.

Early the next morning, after a late, late night, every stewardess is missing…aka still sleeping. Captain Sandy is p*ssed that Anastasia overslept, but the show must go on. Breakfast gets overly prepared by Ben, and Travis continues being extra sensitive over life cuz he misses his dude, Jack. You see, Jack’s now got Aesha, but Travis only “has vodka.” He claims that he may quit drinking soon…yea, right! Maybe the charter guests should take a page from Travis’s book and lay off the booze. They’re hungover as all get out and “they really want naughty food” (ie: a cheeseburger). Woah—somebody better tell those ladies to calm down!

In the meantime, Captain Sandy is becoming concerned about increasingly strong wind gusts. “The boat’s dragging anchor” and apparently so are the deckhands. They’re lolly-gagging about and cleaning up all of the water toys, but not fast enough for Captain Sandy. As Joao and Colin struggle to get everything situated, Colin yells out, “I think I broke it!” Oh, Colin. Now is NOT the time to get injured. If only June stayed… sigh. Does Colin hate the boat THAT badly that he has to go get hurt?! First, he tried to “take one for the team” for June, now this?? Man. Life must be pretttty bad on the yacht. Off he goes to the hospital.

Tonight, Captain Sandy is going to be having dinner with the charter guests. This adds more pressure to Ben’s dinner service, particularly because he really wants Anastasia to help him out. But alas, Hannah may not share her stew. Travis continues to mope around about losing his friend until he heads off with Joao to pick up Colin from the hospital. Colin finds out that there are no broken bones and that he’s just “a little inflamed.” What a wuss.

The yacht is whirring with activity, and Ben appears to be imploding with stress. His nerves are clearly getting to him regarding tonight’s dinner service, and as Captain Sandy finds her seat at the table, the food begins to come out. I am LOLing at Captain Sandy sitting around listening to these lunatic guests fight for her attention. They talk about absolutely nothing of importance and are legit ticked off that they’re “serving themselves” dinner (OMG).

They call for Ben to come up, and Ben seriously gets LOST on the boat before eventually finding his way to the table.  After the meal, Captain Sandy approves of her dinner (despite the coldness of the food) and Ben is able to breathe a sigh of relief.

How hilarious is a drunk fight? The two women bickering post-dinner regarding Captain Sandy’s attention was laughable. Do ya see what booze does to ya?!

Because Jack has actually been WORKING lately, he’s allowed to drive the boat out the next morning. That’s Captain Jack to you! The guests begin packing up, and Travis manages to slip one of the charter guests a love note. It’s so uncomfortable to watch as he hugs her and shoves a gnarly piece of paper in her hands. Hopefully, that helps with the tip? Captain Sandy seems generally pleased with the charter (minus Anastasia’s oversleeping snafu) and the tip elicits some excitement from the crew.  Seems like all that flirting with the cougars, I mean, guests, really paid off…

The clean-up begins, and everyone is really looking forward to the evening off. Hannah fears that she may be babysitting a wasted Travis again, but she’s completely over it…and him. Plus, there’s fresh meat on board (Ben), so really, Travis who? Hannah manages to be passive-aggressive to Travis pre-going out for the night by seeking him out and saying, “Please don’t make my night, sh*tty, ok?” Oh, I’m sorry, Hannah. I didn’t realize you were the boss of Travis and his behavior.

Once out, Travis is amped up for some RBVs, and he hasn’t let up on the alcohol one bit. He’s sipping on vodka, then a beer. Really, he would drink anything available. Hey, at least he drinks with his pinky up like a GENTLEMAN, amiright?? All kidding aside, he gets out-of-control sloppy drunk. “Travis drunk” is next level. He can’t stand. He can’t walk. And he needs a babysitter. This time though, Ben’s on Travis duty…. I hope he gets a bigger tip for taking one for the team.

TELL US – THOUGHTS ON BELOW DECK MED?