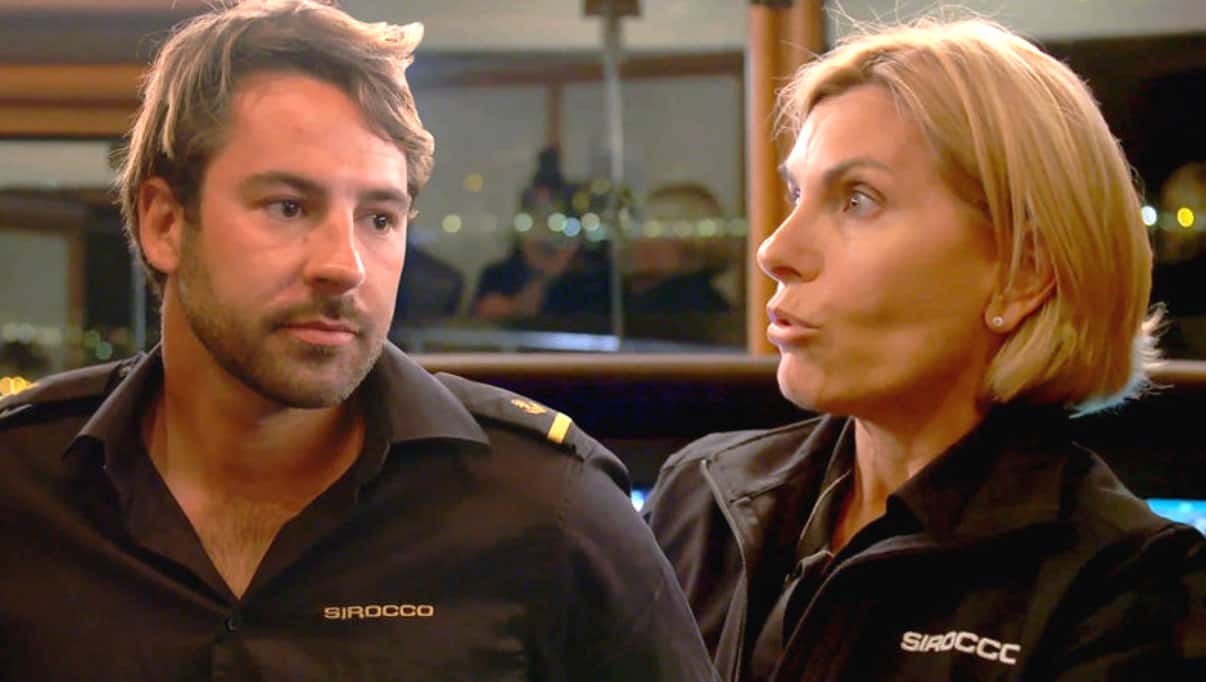 Choppy seas make for an uncomfortable charter in more ways than one on this episode of Below Deck Mediterranean.

It’s 2:04 am and Travis is sloshed. He can’t even sit up during the cab ride home. Looks like somebody needs some greasy food stat. The next morning, with only four hours to go until the next charter, the crew begins stirring, and Travis wakes up with zero recollection of what went down the night before.

Travis blames his excessive drinking on the fact that he “doesn’t like his job…” Perhaps HE should have stepped up instead of Colin when June was getting the boot. That would have been genius, amiright? Captain Sandy is onto Travis, though. He isn’t hiding the booze on his breath, and she is getting concerned about his behavior. Took her long enough…

Despite the fact that Anastasia is no longer on chef duty, she goes shopping with Ben for some supplies. Captain Sandy is legit obsessed with tacky table-scapes, and Anastasia is on the hunt for some décor to spruce up meals. Really, it was Hannah‘s idea to simply get Anastasia off the boat cuz she’s been sucking as a third stew so badly lately. Anastasia returns empty-handed since she wasn’t quite inspired. Hannah is p*ssed…but to be fair, when is Hannah not annoyed?

Captain Sandy fills Hannah, Joao, and Ben in on the newest charter guests. It appears as though one of the primary charters is allergic to essentially everything, so therefore, Ben is gonna have a rough go. Can’t wait to hear him make excuse after excuse for this charter. While preparing for the arrival of the guests, Hannah finds Jack to b*tch about her favorite topic: Travis’s drunken antics. Hannah is annoyed with Travis’s “selfish” behavior, but Joao is a little more understanding. Joao gets that Travis isn’t in a good place and is lacking motivation, but alas, Travis still has to work.

Can we discuss the primary’s “alcohol, now” t-shirt? Does he have another one for Travis? Too soon? Hannah goes through the same song and dance, giving the grand tour as a big problem arises. The seas are, in the words of Captain Sandy, “a little bumpy.” Looks like they’re gonna need some anti-vomit meds soon. Luckily, the boat is stashed with Dramamine, and Captain Sandy is a professional who steered the ship to calm seas. Unfortunately, a grumpy, hungover Travis hasn’t calmed down any. He is still salty about being “over” #yachtlife, but he seems like he is having a grand old time cruising around on the jet ski. What an afternoon.

Ben, in true chef-on-a-yacht fashion, continues to complain. The man needs 200 eggs, whines about everything, and makes Anastasia do all of his dirty work. Speaking of dirty work, Travis loses his marbles when he is told to take the interior garbage out. I mean, he IS in the middle of helping Joao and Colin with a boat issue, but still. He didn’t need to bring the sass, especially when Captain Sandy told him to do it. It’s evident that Travis is beginning to unravel, and Captain Sandy has reached her limit. She calls him to the bridge and talks to him the way a mother would talk to a cranky toddler.

“This place is so dysfunctional.” Complain, complain, complain, Ben. There’s an excuse for everything. It looks like Ben is about to explode. I mean, he’s freaking out and in the midst of his frustration, he burns himself…badly. He’s throwing knives and acting like a deranged lunatic. Ben actually makes Hannah look sane! The only good thing about Ben is that the man can make a kick a*s dessert. I was salivating over that flourless chocolate cake.

Complete side note: I’m shocked that I’m not 100% sick and tired of Jack and Aesha’s relationship.  They are kinda cute…especially because they aren’t overly cutesie.  Take, for instance, the poem Jack wrote for Aesha.  Do yourself a favor and rewind to the part when Aesha reads it out loud to the crew. Jack is very clearly the next Shakespeare. JK.

At the end of the night, Captain Sandy has a powwow with Hannah. The captain wants to know if Travis has been drinking on the job and/or if Travis has a drinking problem. Hannah was surprisingly cool about it, but Captain Sandy heads off to “spend some time” with Travis. Sounds like the equivalent of when your significant other starts a conversation by saying, “we need to talk.”

She lays it out there for Travis: “I have smelled alcohol on your breath.” Travis really doesn’t say much. Captain Sandy explains that she has been there as she struggles with alcoholism, which runs in her family. She added that she hasn’t had a drink in 29 years after drinking too much led to “incarceration” during her younger days. We get a glimpse into her personal life and some snapshots of a younger version of the captain–a brunette?! I guess she really believes that blondes DO have more fun…

Travis seems shocked that Captain Sandy shared this part of her life with him, but he simply retorts, “I just drink more than everyone else.” Uh, that’s not a normal statement. Captain Sandy tries to talk some sense into Travis, but you can totally tell that he is not planning on changing his ways any time soon. The first step is to admit you have a problem. Travis is like a broken record saying he is going to cut back on the booze…until the next crew outing, I’m sure.

The next morning, things are not going so smoothly. Pun intended. The Mediterranean is unpredictable. Captain Sandy told me that. And boy, she was right! The choppiness is real and everyone is feeling the potentially dangerous waves. You know it’s never good when Captain Sandy walkies in with, “All crew, all crew. We have a situation…”