Home Real Housewives of Orange County News The RHOC Recap: Tamra and Shannon Call Out Vicki for Spreading Rumors About Others

The RHOC Recap: Tamra and Shannon Call Out Vicki for Spreading Rumors About Others 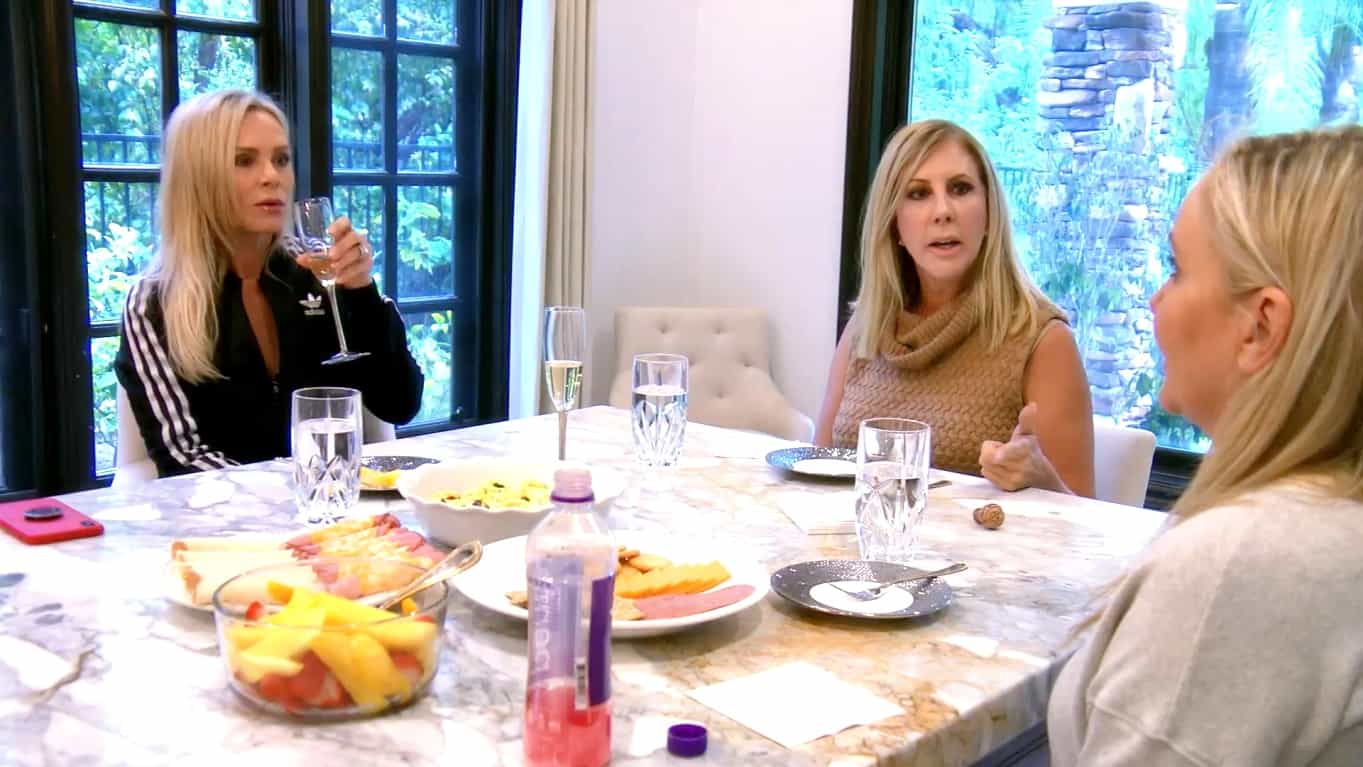 On this episode of the Real Housewives of Orange County, an upcoming trip to a wellness retreat creates a reason for everyone to get along once more…maybe.

Woah. Shane is HELPING with his daughter’s party?! He’s like a new man since taking the bar (siiiiiike). Emily has clearly come a long way from her Ohio birthday parties. I mean, this party has face painting, unicorn cakes, and a clown (Shane). Gina rolls up late to the party, and I can’t say I am surprised by this. I’m sure she lost her wallet. Or her license. Or the Uber didn’t show. Whatever the case is, Gina is a total hot mess.

In the meantime, Kelly and Shannon are out for a sh*t talking stroll–one of their favorite hobbies and interests. Gina is annoying Kelly lately, but Shannon jumps to Gina’s defense. She reminds Kelly that Gina is going through a tough time and that her lawyer essentially saved Gina from a night in the slammer. Shannon explains that “all the stars were in alignment” that Gina didn’t get arrested on that fateful day. Shan and Gina are becoming fast friends. Although Shannon is getting closer to Gina, she still can’t make things right with Emily. Speaking of Emily, Kelly shares that she is going to be attending her dance in Vegas. Shannon looks disgusted and Kelly almost can’t keep a straight face while sharing the deets about the dance. Mean girls.

OMG, Gina with the sparkly cat face paint. I love how she is trying to have a serious conversation about being “carted off to the clink” with that get-up. Emily is ticking Gina off because she just doesn’t seem to understand the severity of Gina’s situation, and when Gina talks about her budding friendship with Shan, Emily is JEALOUS as all get out.

During the walk, Shannon explains to Kelly that she found a spiritual workout retreat in Arizona (sounds awful) and she wants “everyone to have the opportunity to heal…” And by everyone, she means Vicki, too. Naturally, this ruffles Ms. Dodd’s feathers since she still has not gotten over all of Vicki’s malicious cocaine comments.

Spencer, Tamra ‘s son, is over. Tamra is busting her buttons at Spencer’s recent successes. Besides being in school, “he’s the lead trainer at Starbucks.” Wowowow. To be honest, it’s cool to know that Tamra is still making him stay down to Earth by having a legit job. Maybe all that hard work would explain why Spencer doesn’t have time to cut his hair. Have you seen that mop?! Evidently, Ryan, Tamra’s oldest son, and Spencer are still battling over politics and this has brought a divide between the STEP-brothers. In the words of Spencer, Ryan has “been in a rut a long time and he has daddy issues…and has a problem with authority.” Well, Spencer hit the nail on the head, huh?

Over at Kelly’s house, she FaceTimes her brother, J.R. Kelly’s family, including her mother, live in Arizona. Since the ladies are heading that way for their trip, Kelly wants to touch base. In case you forgot, there was a point where Kelly’s mom and younger brother, Eric, lived with her. Kelly explains, “I felt like my mom and Eric were taking advantage of me.” The fight that occurred because of this issue caused them to move back to Arizona, and Kelly hasn’t spoken to them for about two years.

Kelly becomes emotional whilst discussing her mother’s failing health with J.R. and asks Jolie if she would like to see Nanny again. Let’s face it, Jolie couldn’t seem to care less. She’s just counting down the seconds for her mom to run off with her boyfriend. Kelly states, “Brian has rented a place below me.” OMG. That seems a little excessive. Also excessive is her oversharing of her sexcapades. Kelly keeps turning to Dr. Brian for “sage” advice about her mother, and she becomes emotional as he gives her some canned words o’ wisdom about families, and blah, blah, blah.

Ah, Dr. Deb. Why is Bravo trying to make her a thing?! Notice the EGO nameplate this episode. Braunwyn is out hiking with her mother and they reminisce about Daddy Ray and Mama Jo…the grandparents who essentially raised Braunwyn. They get to chatting about Braunwyn’s aunt, the one person Braunwyn never wants her children around. Evidently, this aunt is bad at thinking before she speaks and says inappropriate things all the time. Anddd while babysitting her twins, Dr. Deb blew it and had the aunt stop over. While Braunwyn attempts to get through to her mother about a serious topic, Dr. Deb shrieks, “Yay! There’s a bee!” Braunwyn becomes enraged and emotional, and it’s clear that Dr. Deb is out to lunch, and then some.

These women really love the athleisure wear, huh? Shannon and Tamra basically LIVE in those clothes… I especially love Shannon’s lip leggings. Like, wtf? Shannon stops by Tamra’s house to talk about this upcoming wellness trip to Arizona. Shannon is really pushing for Vicki to attend and wants the whole group to get along. Tamra makes it clear that she is on Kelly’s side, but alas, the ladies phone Vicki and invite themselves over to her place last minute.

“In my mind working out on a trampoline cannot be an actual workout.” Gina and Braunwyn are up for any type of workout, no matter how ridiculous it may seem. Um, why is Gina puking at this trampoline exercise class?! In her words, she went to “toss her cookies” (perhaps she is hungover??). It turns out that Gina is upset with her ex-bff, Emily. Gina cannot attend Emily’s burlesque dance because of all the stuff going on in her life, but Emily seems to be giving her a hard time about missing this debut. Gina jokes that Emily may be going through a mid-life crisis, and Braunwyn nonchalantly says she had one of those. Wait, Braunwyn had a breakdown and wound up in the hospital? How are we just glazing over that??

HAHA. I like how it seemed as though Tamra and Shannon phoned Vicki on a whim and sprung a visit on her, but Vicki has a spread out for days. Shannon is going on and on about this wellness trip: “This is Oprah Winfrey’s favorite resort.” If it’s a trip for mental health, WHY would she want crazy Vicki to attend?! Also, how old is Vicki? Why is she referring to Braunwyn as “Boring-Wyn?” That’s not even witty! Why is Shannon taking on the role of group peacemaker?! Vicki claims that she doesn’t deserve to be spoken to the way Kelly speaks to her, but she needs to remember that she is not an innocent victim in all of this.

In fact, Tamra and Shannon attempt to coach Vicki on the best way to deal with Kelly, as they politely call her out on her habit of spreading nasty rumors about others–cocaine anyone? And then she acts like it’s okay because she heard the rumor from someone else. In true Vicki fashion, she is NOT receptive to the valid criticism and the ladies’ advice of learning not to react simply goes in one ear and out the other. At least they tried!

Braunwyn’s thought process is baffling. After fighting with her mom, she thinks it would be cool to set up a dinner to introduce Dr. Deb to her new buddies. It appears as though Dr. Deb is social media friends with the girls, but there’s nothing like meeting Dr.Deb in person, amiright? Braunwyn has arranged a dinner with Shannon, Kelly, and Tamra. They hit it off as they chat about their love of younger men and how Dr. Deb is Jewish “by insertion only.” What is happening here?!

In preparation for her Vegas dance, Emily shows her dancing shoes to Shane. Shane is unimpressed, and Emily tries her best to seduce/make Shane interested in anything. She retorts, “I’m gonna go to Vegas and I’m gonna dance.” When is she gonna realize that this guy doesn’t give a sh*t about her?! He claims that he was focused on the bar, which is why he was ignoring Emily. Emily suggests a mediator may be the answer to their problems, and Shane states, “Now this is just a bashing session on Shane.” Emily tries to tell Shane that she gets tired of being the butt of his jokes all the time and is tired of his sarcasm. He corrects us all by saying sometimes he simply partakes in SATIRE, not to be confused with SARCASM. Ugh. I just wanna smack him.

Wait, why did Dr. Deb bring her crystals to dinner?! Shannon is practically drooling over these, and that somehow connects her to Deb. The ladies talk about western medicine, and Shannon uses that as a segue to ask Kelly if she is going to attend this wellness retreat. Kelly is still unsure, as she doesn’t want to see Vicki’s face.

Dr. Deb becomes interested in this whole scenario, and after hearing about Vicki’s personality, Deb pulls out her nameplate and explains that Vicki is dealing with her EGO. I can’t. The ladies talk Kelly into coming on this trip, and it better be worth it. Kelly makes it clear that she is “not gonna back down from this old a*s b*tch.” Translation: she is not gonna take anything from Vicki. Looks like Kelly is gonna need a wholllllle lot of crystals to get through this “wellness” trip with Vicki.