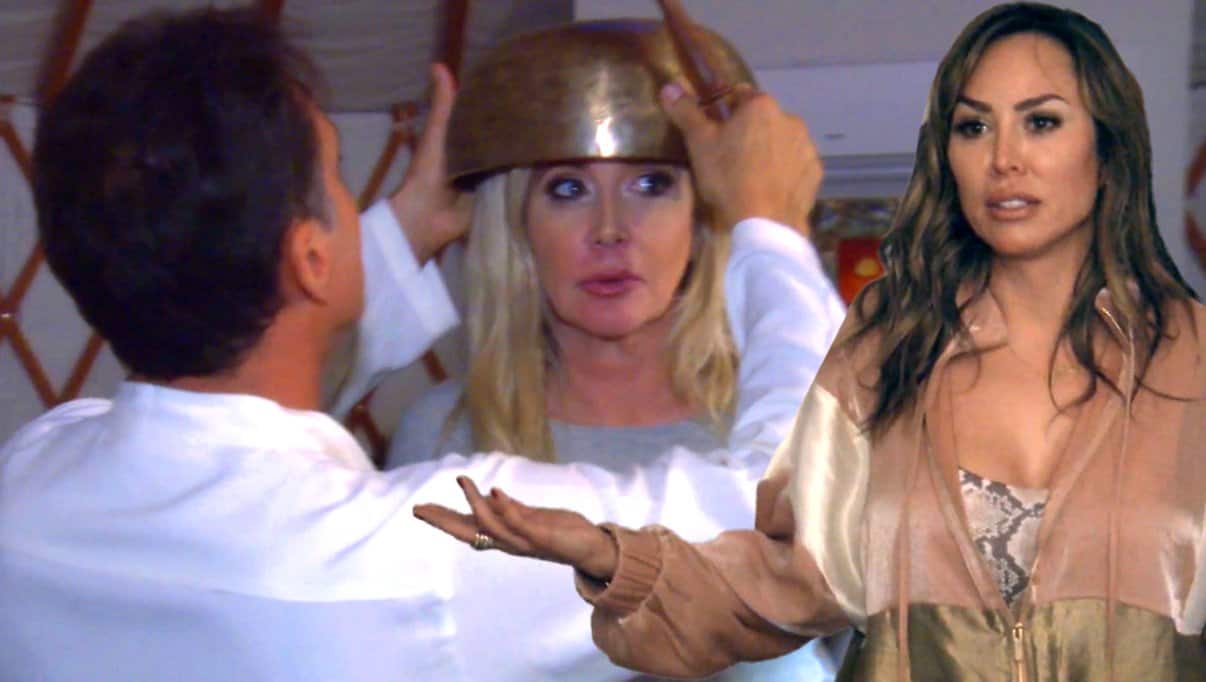 A trip to Vegas and an injury create some serious drama for the ladies on this episode of the Real Housewives of Orange County.

In case you forgot, Emily is heading to Vegas to perform some bizarre sexy dance that was really meant for her husband, Shane, as a 10-year anniversary gift. However, Shane is a weirdo and opted out, so therefore, Emily will be taking the trip with Braunwyn and Kelly instead. Although she is disappointed Shane will not witness her caressing her bod and doing a few dance moves, the show must go on.

Gina meets with her new lawyer, Mike, who is actually Shannon‘s friend. Mike, the lawyer, is using big words and talking like an educated individual, which means that Gina has no idea what the guy is talking about. She is dumbfounded to learn that her license will most likely be suspended for a year, but Gina, it could have been so much worse. Gina states that she is “disappointed” in herself for getting into this DUI predicament and she looks like absolute hell. Yikes.

Kelly is a part-owner of a sparkling water company, Positive Water. She invested a quarter of a million dollars into the product and is doing her best to sell the sh*t out of it at some wack expo. Tamra and Eddie pay her a visit and Kelly explains that she is leaving for Las Vegas to see Emily’s performance later on. Tamra is miffed that she wasn’t invited to the Vegas trip, but really, she should be grateful to be saved from that car crash.

Emily and Braunwyn have landed in Las Vegas. I don’t know if I am happy that it’s finally happening so Emily can stop talking about the dance OR if I am sad that I have to watch said dance occur. Wait, why are Pary and Larry, Emily’s in-laws, in Vegas to celebrate this “supposed to be” 10-year anniversary, but Shane isn’t? This is so bizarre. Emily FaceTimes Shane to brag about the over-the-top suite they are staying in. And to that, Shane retorts, “Don’t send me the bill.” How ’bout the closing of the conversation??? Emily: “I love you.” Shane: “It’s a bad connection.” I am cringing.

With only eight hours until showtime, Braunwyn unpacks and Emily rehearses. She touches herself, shashays, and she looks absolutely ridiculous up on that stage. I mean, more power to Emily for having the nerve to do this. I certainly could not. In the meantime, Braunwyn is parading around in her bikini and demanding drinks from the butler in their suite. It’s just an excuse for her to show off her bod. She totally wants viewers to say, “OMG, she looks like that after how many kids?” And ya know what? It worked cuz I couldn’t get over those abs either.

Once Emily returns from practice, she confides in Braunwyn. “Rehearsing on stage was totally different than rehearsing in my kitchen.” Well, duh. Kelly eventually joins the ladies, but not before she met Barry Manilow on the way up to the suite. Vegas life, huh?

When nightfall approaches, Emily leaves to prep for the debut and Kelly and Braunwyn put on their faces. Braunwyn announces, “I love carrying around my little chalkboard.” Certainly could not forget a portable chalkboard for a Vegas trip, amiright? Where did they get Braunwyn from? And where does she get her Dancing with the Stars cocktail dresses?! Kelly and Braunwyn sit down for a pre-show chat and they discuss the upcoming Arizona trip. Kelly makes it clear that she has no desire to see Vicki or be around Vicki, and I don’t really blame her.

LOL at Emily’s “Sexxy” with a double X robe. Evidently, that’s the name of the show. And there are actually people who paid to come to this show. And it’s a real show. Emily is beginning to feel some serious jitters in her thong and lace bodysuit, and I would be nervous to perform that dance routine in front of my father-in-law, too. I mean, did you see the way that guy was ogling the other acts?! His eyes nearly fell out of his head. Now, if only their son was as into Emily as they are. It takes Emily a solid four eight-counts to remember that she had a dance routine to follow, but after she fumbled through half it, she managed to pull through. Shane–you missed out on a real doozy!

The next morning, Em’s in for a true treat! Shane, ever the romantic, surprises his bride in the suite. “I’m shocked the little dork showed up.” You and me both, Kelly. Looks like the guy put in some effort to get his scrawny self there. Shane looks super uncomfortable being left alone with Emily and tells her that she needs to be more easygoing. So, it’s her fault that she wants a good marriage?

Back in the OC, Tamra, her mother, and Gina make a quick trip to Laser Away. Tamra’s mom offers to be Gina’s Uber driver to stop her from getting hauled off to the “clink” in the future, and I am envisioning Tamra’s mom joining the cast next season solely as a DD. Hilar. Gina explains that today she will be getting some Botox. “I like to call it Bobo. That’s what we shoot up. Orange County crack.”

How in the world are you affording this “Bobo,” Gina? You seem to have a lot of legal bills… As Tamra gets covered in numbing cream, Gina sh*t talks Emily for her Vegas dance. Gina feels like Emily isn’t sensitive to what is going on in her life, and so she just makes fun of Emily and her decisions. In reality, Gina just wants Emily to be supportive of her sh*t show of a life right now, but alas, Em had a dance to learn dammit.

The Arizona trip is rapidly approaching. All of the ladies are prepping for the healing that is about to ensue. Shannon explains that there are two villas, but not to worry–Kelly won’t have to bunk with Vicki. Vicki will be joining the ladies later, so until then, everyone is all smiles and full of excitement. They arrive at Miraval and toast with their natural, sugar-free drinks. Kelly remains immature as they head over to hit the gong because she keeps referring to it as a dong. She makes everything sexual and she behaves like a teenager who had sex for the first time and therefore can’t stop talking about it.

The next stop is the sound bath. The women are about to get their energy cleared, and they are asked to share their feelings. It’s making some of the women uncomfortable since they have to divulge what they would like to let go of and what they choose for their futures. When the process gets to Kelly, she mocks it by explaining that she wants her water to be picked up by Walmart, Target, and so on. Shannon is peeved.

Shannon volunteers to WEAR a bowl on her head to embrace the full experience of the sound bath. Whilst standing in the motherbowl, Kelly sneaks up behind her and hits the bowl on Shannon’s head with a mallet. And she hits it pretty hard. Shannon didn’t realize that wasn’t part of the process, but when she does comprehend that Kelly did it and did it on purpose, Shannon is livid. Good luck finding the zen! Shannon immediately has a headache from the whack and Kelly does not apologize for ruining the serious moment. Even the instructor tells Kelly that her actions were not cool.

Post sound bath, the ladies get led to their villas. Shan continues to complain about her head and feels like Kelly really did a number on it. Tamra feeds into it by telling Shannon that her spinal fluid could be leaking. Now suddenly Shannon’s left eye is blurry. “A little bit.” Oh for the love… Shannon is queen over-reactor. Tamra knows this, so she takes her to the doctor to get checked out for some peace of mind. In the meantime, Kelly sh*t talks Shannon to Braunwyn and Emily. Gina calls the girls to let them know the deal: Shannon went to urgent care. For the record, Kelly did call this.

Kelly also called Shannon a “f*ckin dumba*ss” and she is not too far off. Shannon is insisting on getting it checked out and further insists on calling VICKI to fill her in on the injury. Oh, that’s a GREAT idea. Add MORE fuel to the Vicki hating Kelly fire. In the words of Shannon, “so far, #notsozenyet.” At the end, a bombshell is dropped: the urgent care worker asks Shannon if she wants to press charges against Kelly, leaving us with a cliffhanger until next week. Oh, that’ll TOTALLY add to the zen!!!

TELL US – THOUGHTS ON THE RHOC EPISODE? DID KELLY GO TOO FAR OR IS SHANNON OVERREACTING?