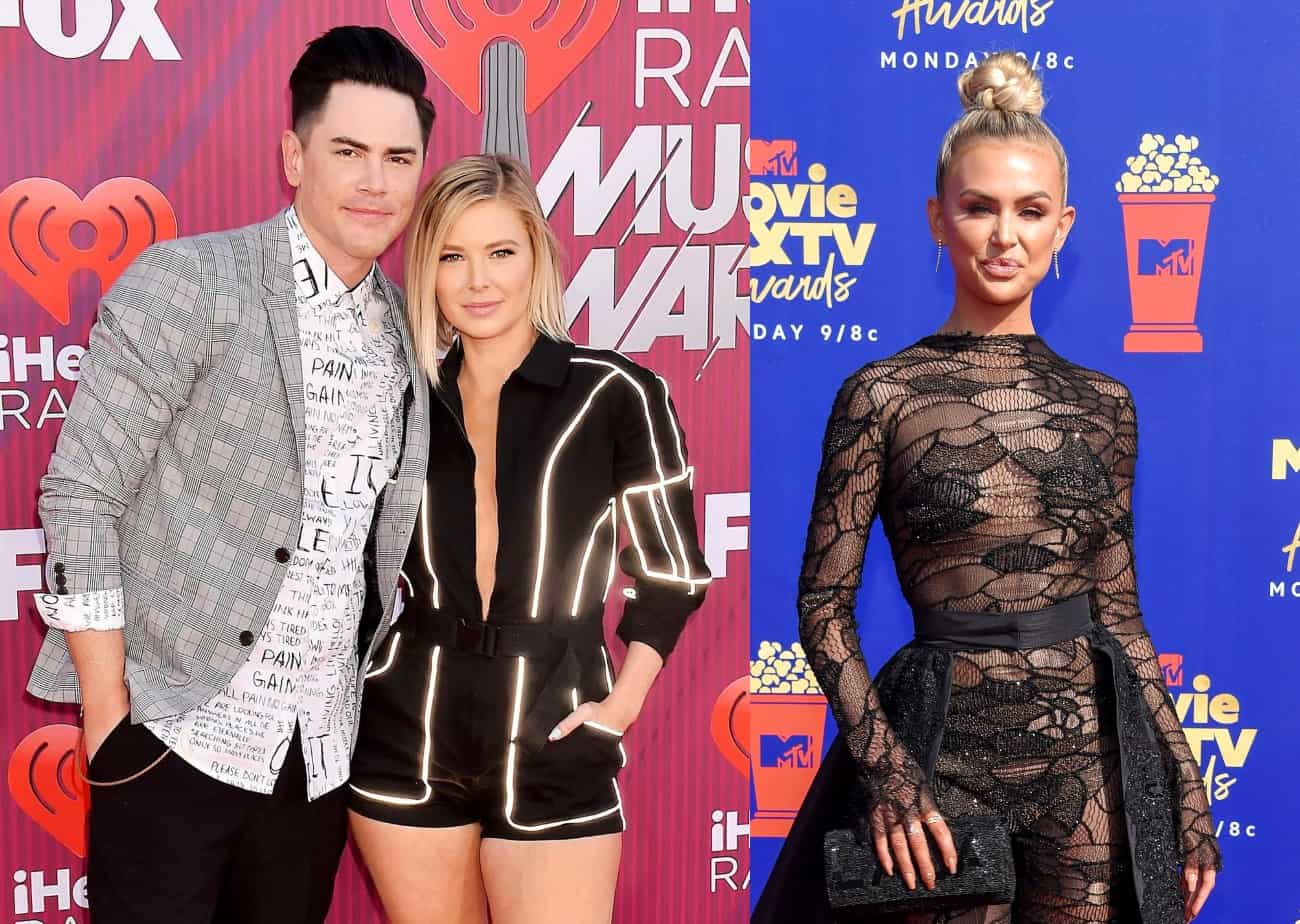 Ariana Madix is clapping back at Lala Kent for the statements she made about her home earlier this month on Watch What Happens Live.

After the Vanderpump Rules cast member took aim at the house Ariana shares with her boyfriend, Tom Sandoval, during a chat with Andy Cohen by pointing out that they have no furniture, Ariana took to her social media page. There, she shot back at her co-star’s diss after receiving a question from a fan and explained why her $2 million Valley Village home is so bare.

“How do you feel about Lala saying you and Tom don’t have furniture on WWHL? Seemed like a diss,” the fan wrote.

“We are enjoying taking our time furnishing our home with pieces we really love and mean something to us,” Ariana replied. “Could have bought that beige staging furniture, but that’s just not how we roll. We don’t care to just fill it with stuff.”

“She can diss all she wants. She doesn’t live there,” she added of Lala. 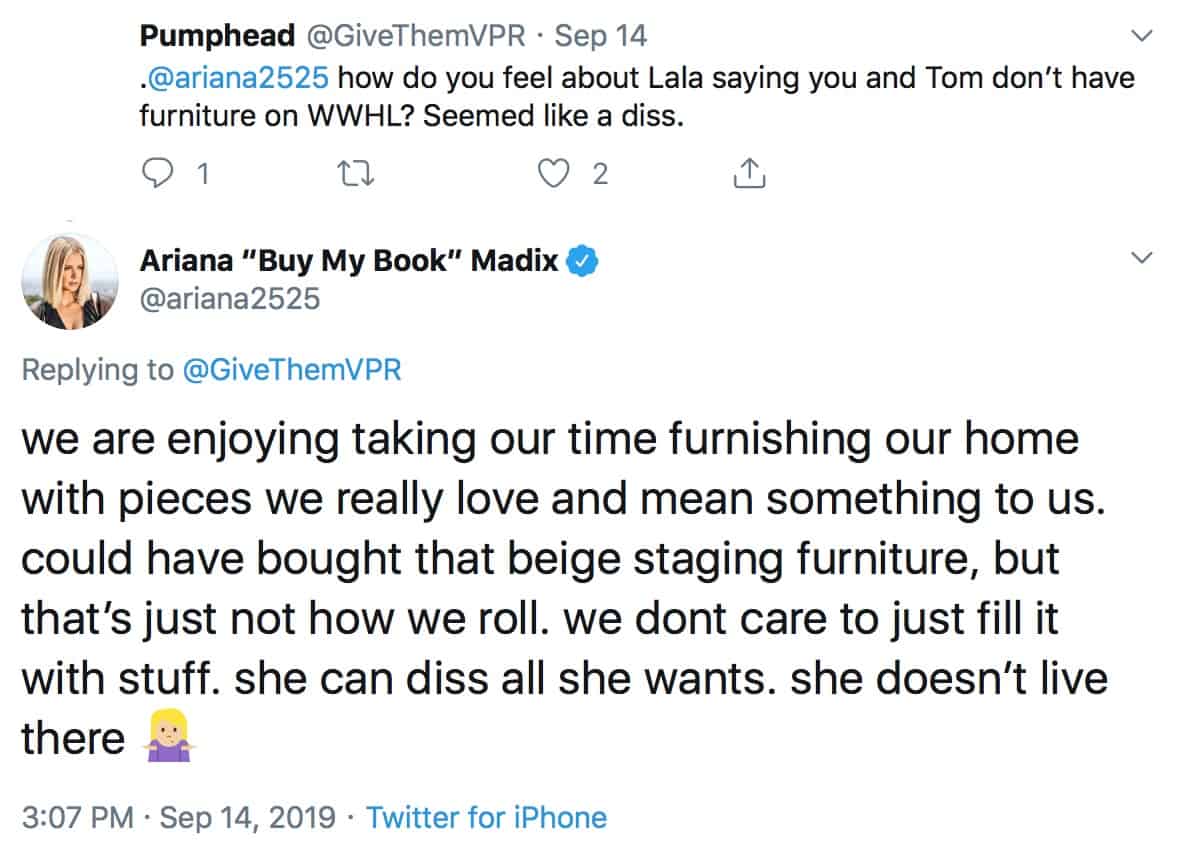 During Lala’s appearance on WWHL, the Pump Rules star was asked which of her co-stars have the nicest home.

“Um, I think [Jax Taylor] and [Brittany Cartwright],” Lala said of her co-stars’ $1.9 million pad. “Their whole set up — it’s very homey, their backyard is amazing, I think they got like a stellar house.”

Lala then threw some shade at Ariana and Tom.

“I mean, Tom and Ariana don’t have furniture,” she explained.

In addition to her Twitter reaction, Ariana responded to a number of comments from fans on Instagram after sharing a look inside her and Tom’s home. She also admitted that their bedroom is “not the most glamorous.”

“But we are workin on this bedroom! How the heck did we manage to get the fitted sheet right the first time?? Now just waiting for our new bed to get here!!” she wrote in the caption of her post.

After sharing her Instagram video, Ariana revealed she and Tom are “waiting for the custom pieces [they] had built.” 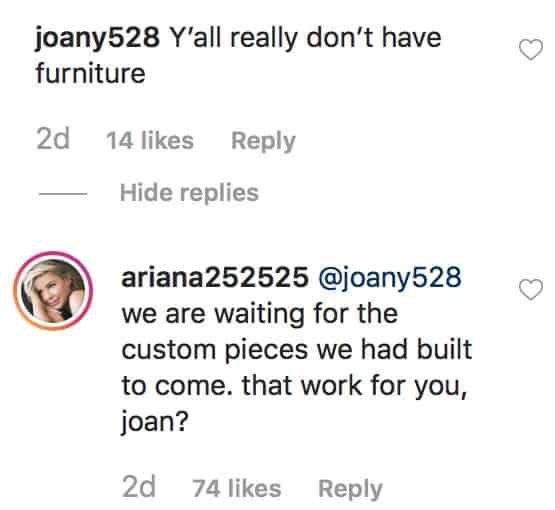 She also made it clear that she was thrilled to be a homeowner and not concerned with the opinions of snobs.

“I’m thrilled. Like what do these snobs need? Diamond Pillows?!” she wondered. 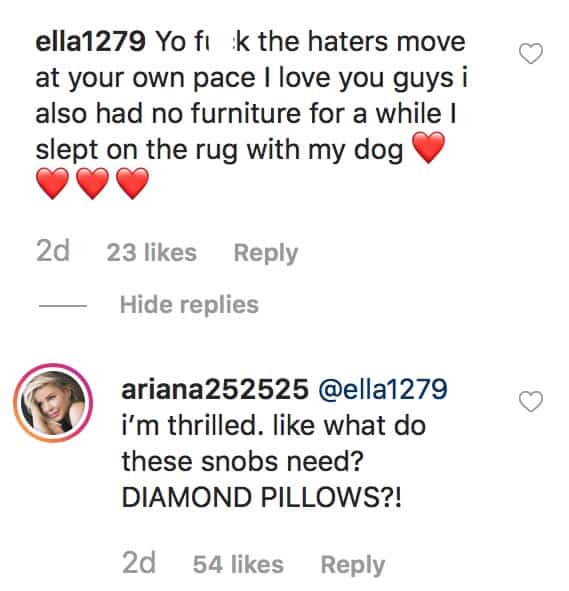