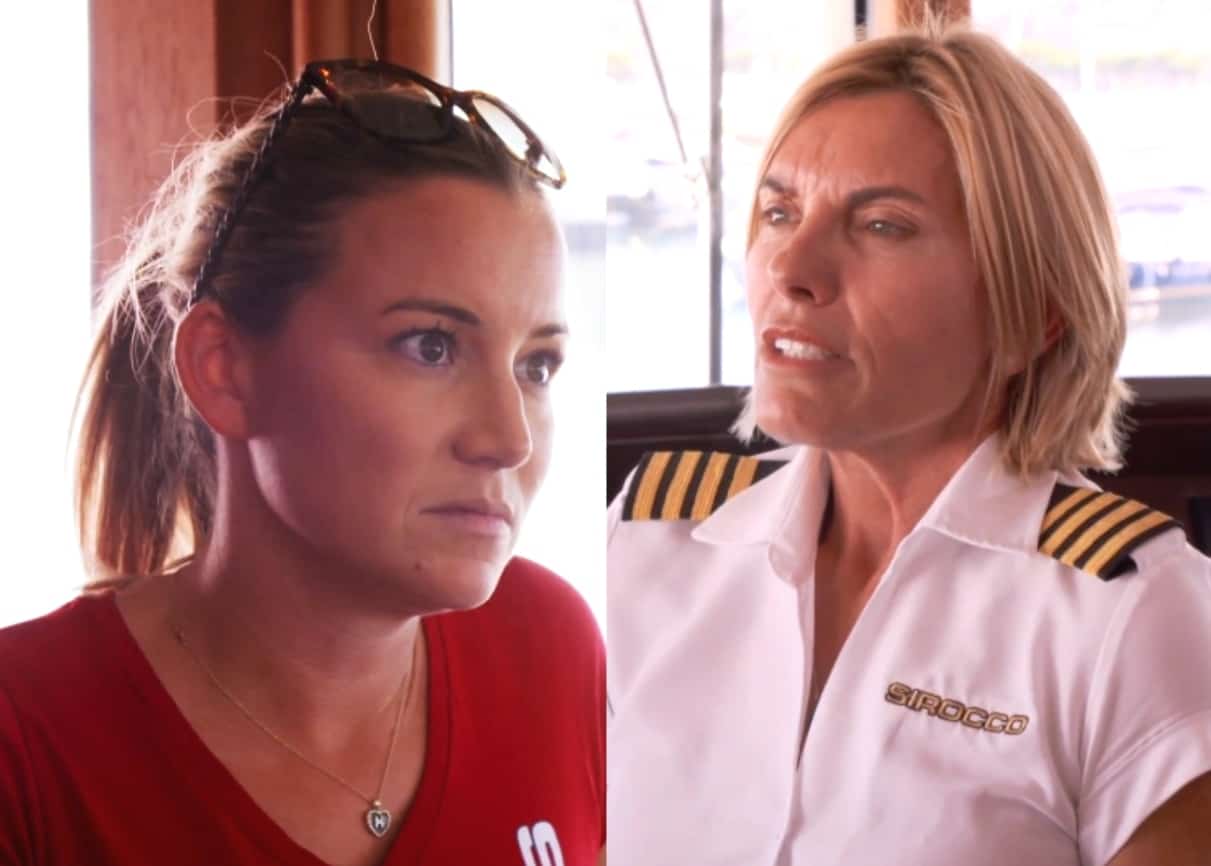 It’s the last day of the charter AND the end of the season on this episode of Below Deck Mediterranean.

Captain Sandy is on a rampage. She is laying into Hannah for…you guessed it…setting the table. I have never met someone so hell bent on tablescapes before! Captain Sandy is also annoyed that the stews get break after break, yet nothing is set up on the interior. BUT–she is all smiles when she talks to Joao. Captain Sandy kisses Joao’s butt and basically sh*t talks Hannah to him. She also decides to “invest in him” cuz he “gets it.”  Translation: she’s gonna hook him up with a captain’s job interview.  Silly Hannah.

Perhaps Hannah should just go work on a cruise ship. Pshht. Luckily, Captain Sandy is genuinely pleased with the over decorated breakfast table. The crew seems a bit nostalgic, as this is the end of the line for them. Joao and Jack smile and high five (look how far they’ve come), and as Captain Sandy puts it, “Sirocco became my b*tch.”  Ah, the end of another season.

So, there’s a boat that caught fire in the port. Captain Sandy has to think fast. She over-reacts until she realizes that she can, in fact, find another parking space… crisis averted. Why is everyone on this yacht so extra? Ben is like the leader of the pack. Everything is an issue unless the guests like the meal. Then he is as happy as a clam. To get his ego stroked even more, Ben grills the charter guests about their favorite meals he cooked for them. Like I said, so extra.

Once parked in the newfound port, the guests pack up and the crew gets into their whites for the final line up. They all fake an enthusiastic farewell to the guests, but they really just eye up the tip envelope and hope for the best. In the meantime, Hannah begins to have a meltdown because she just can’t quite get Captain Sandy on her team. I mean, the captain congratulates and thanks Aesha for a great season, but she very clearly ignores Hannah during this exchange.

It’s the final tip meeting and Captain Sandy is oblivious to Hannah’s coolness. The captain gives a rundown of the past charters and sucks up to Ben. She invites him to work with her in the future, and really, they are a match made in crazy town heaven. Captain Sandy is still displeased with the interior’s efforts, but she hands out the tips nonetheless.

Post tip meeting, Captain Sandy asks to meet with Hannah. She gives Hannah some big speech about passion, table decorating, yada, yada, yada. And she proceeds to tell Hannah that yachting is just “not her passion.” She tells Hannah to find something that she is passionate about cuz yachting just ain’t it. Hannah is devastated by this.  Thank goodness Hannah’s two stooges, I mean stews, run to her rescue after her convo with the captain and try to comfort her.

Joao wastes no time and is on a phone interview for a captain’s position. He can thank Captain Sandy for this opportunity. Later, the crew gets ready for their last night out together. Even Captain Sandy is joining them to really kill the mood. Travis plans to remain relatively sober around his completely sober captain, but that’s what he always says… Captain Sandy makes a “team” toast and asks for everyone to share their greatest vs. hardest moments.

Joao talks about how he was sick, Travis talks about his friendship with Jack, and Hannah talks about her love of her stews. Ben talks about the galley (what else is new), but leave it to Aesha to keep it real. She tells Captain Sandy that her lowest was the interior not getting enough credit. Zing! Captain Sandy gets salty AF and leaves the meal, but she pretends like she isn’t bothered.  OF COURSE, Joao sticks up for the captain.  Ya gotta be #TeamSandy when the lady’s essentially getting you a job!

After the dinner, Captain Sandy asks to see Hannah (yet again) and lets her know that she is thrilled with Hannah’s work this season. Hannah’s voice nearly breaks as she explains that she’s tried her best, but her best somehow doesn’t seem good enough. Sounds awfully repetitive, huh? Side note: Can we discuss the Travis and Jack slumber party on the deck for the last snooze on the ship? That’s what I call a good friend. I mean, Jack could have totally ditched Travis to be with Aesha for the night, but alas, everyone needs a break from her foul mouth and inappropriate behavior, amiright?

The next morning, everyone begins packing, since this is the last day on the yacht. They all get huggy and emo and reflect back on the season, and suddenly they’re all friends with each other. As an ode to Anastasia’s stint as a chef, Ben gives her a knife and she oohs and ahs over it. She’s the first to go, and following close behind her is Colin, the guy who has been trying to get off the boat all season. Colin is just jazzed to head home to see his momma, but his bromance with Joao will live on forever.

Travis bids farewell to the gang and states that he, “ain’t doing nothing. He’s just trying to chill the f*ck out.” Jack and Aesha, the two who made Sirocco the love boat, are leaving together. I wonder how this relationship is going to hold up in the real world. Like, if they don’t have to share a twin bed or be together 24/7. Aesha explains that she is a “leaving with a man who has a big d*ck,” so I guess she wins???

Is it just me, or do these goodbyes just seem like an assembly line? Like, why do they all leave one by one? Up next to head off is Ben–the complains all day, butt heads with (but secretly loves) Hannah–chef, who only came on board for, like, two charters. Thank goodness he did. I mean, Anastasia would have had a straight-up mental breakdown if not for his arrival.  Joao is up next to go home, and when he sees Captain Sandy for his goodbye, the captain gets allllll emotional.  She says to him that, “You’re in my life forever.” And I guess they’re just gonna be penpals now that Joao is going to actually be a captain of a different boat.

How bout that embrace between Hannah and Captain Sandy? Talk about a love/hate relationship. Hannah promises more passion for future charters and Captain Sandy nods as if she created the person that Hannah is today. What an anti-climactic ending to the season.  I wish Captain Sandy did something wild to just finish it off, but alas, she simply waves goodbye from the deck, and that’s a wrap.